We decided to have another go at the Daemon World rules and scenario from Crusade of Fire! Again, this is a very old game so won't be a real report... but mostly pictures!

I took Eldar since I had just built my Wraithknight into a state where it was playable (during the night actually). So basically a Wraith-army is the majority of my force. I face off against a Dread-heavy list of Iron Hands. 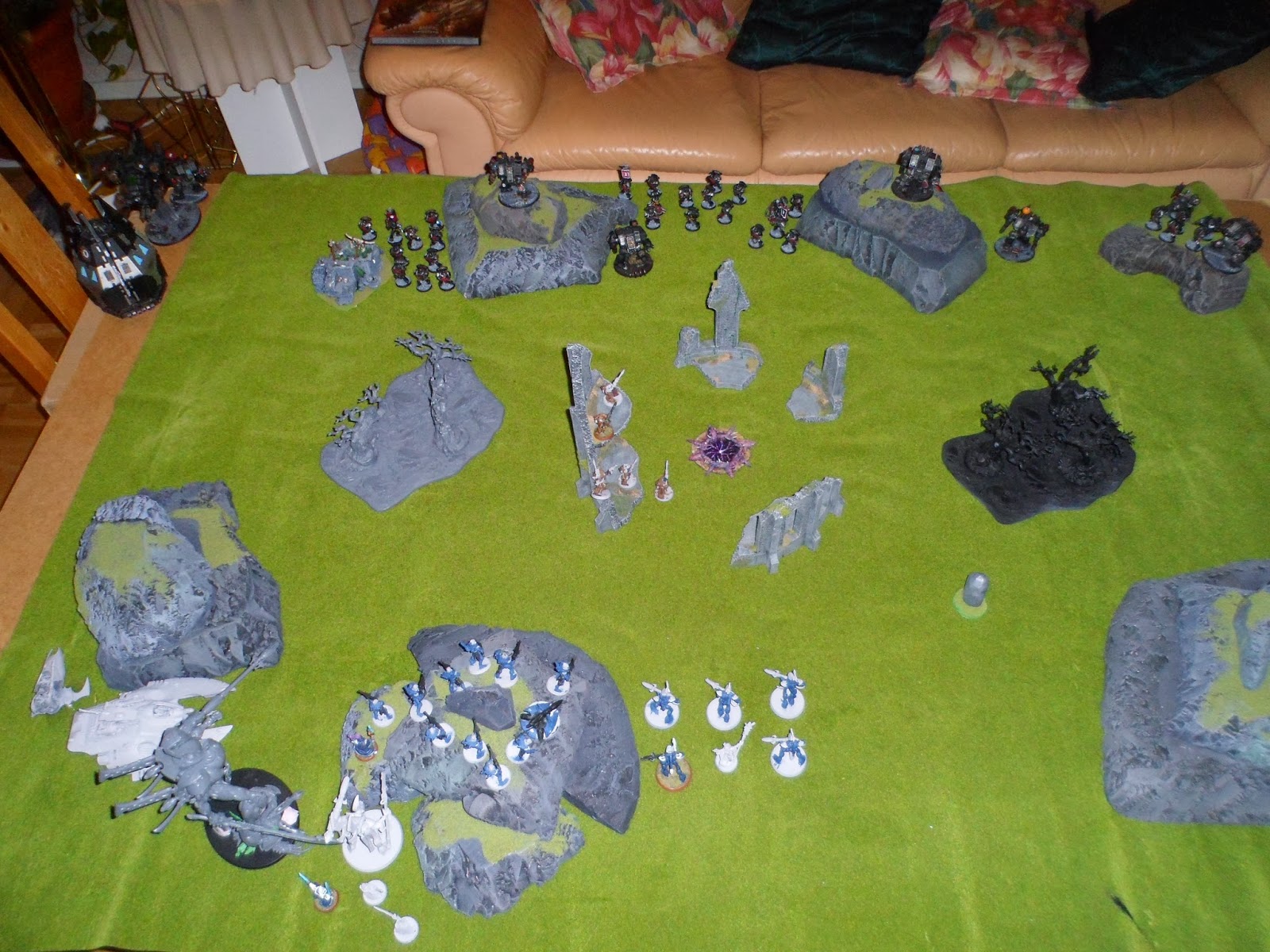 Deployment, I deployed second and went for a refused flank. My Rangers were wiped for First Blood, and also my Guardians gained 4 Possession counters of Tzeentch (granting them a 3++!). 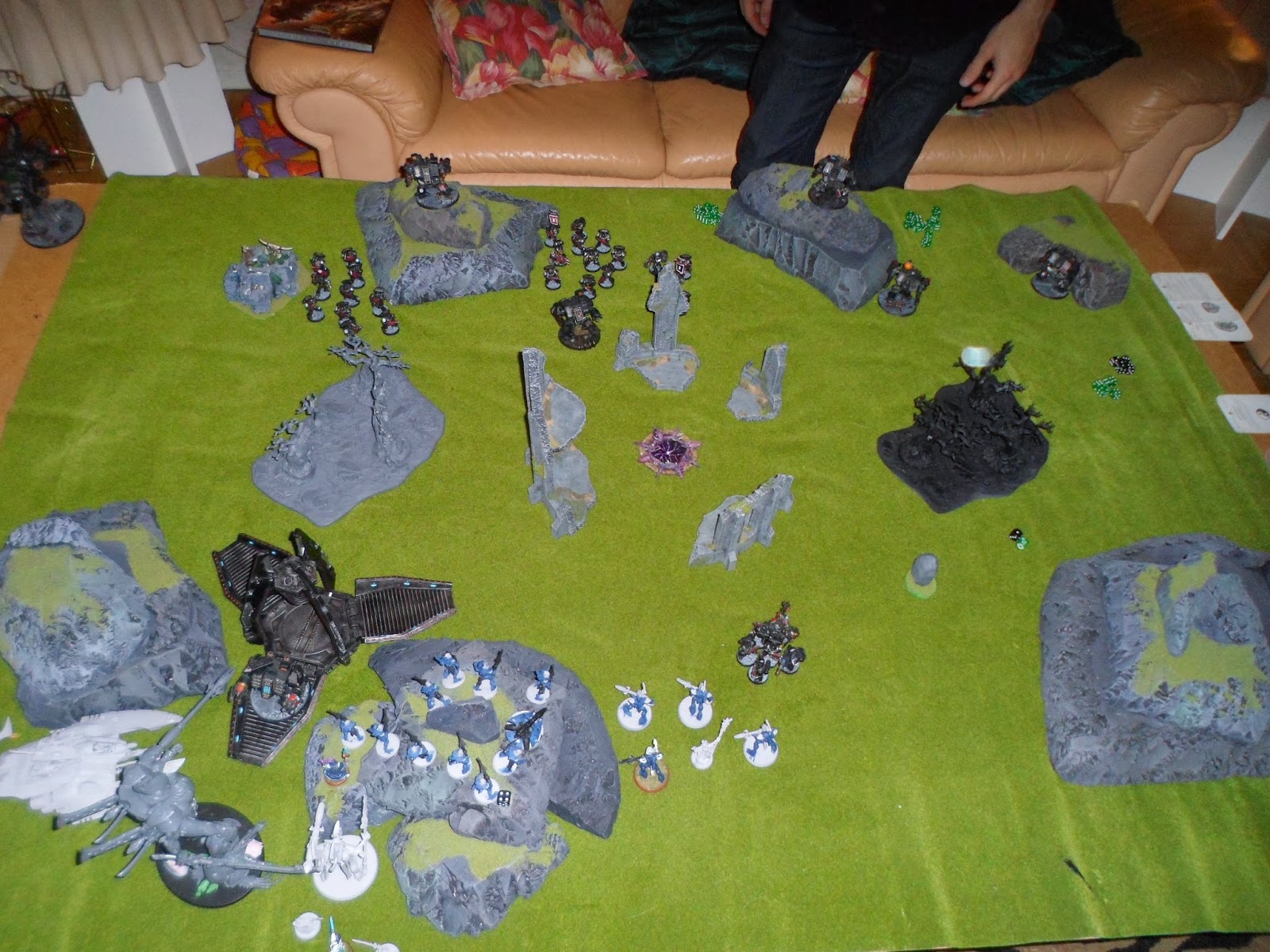 So the first thing that happened in my turn was a unit of my choice got to Deep Strike anywhere... well, of course I moved his Devastators with the Master of Forge right in front of my D-scythes. Thank you for Warlord right there! I also put my Warlord out to be visible... bad move as he was killed right after... 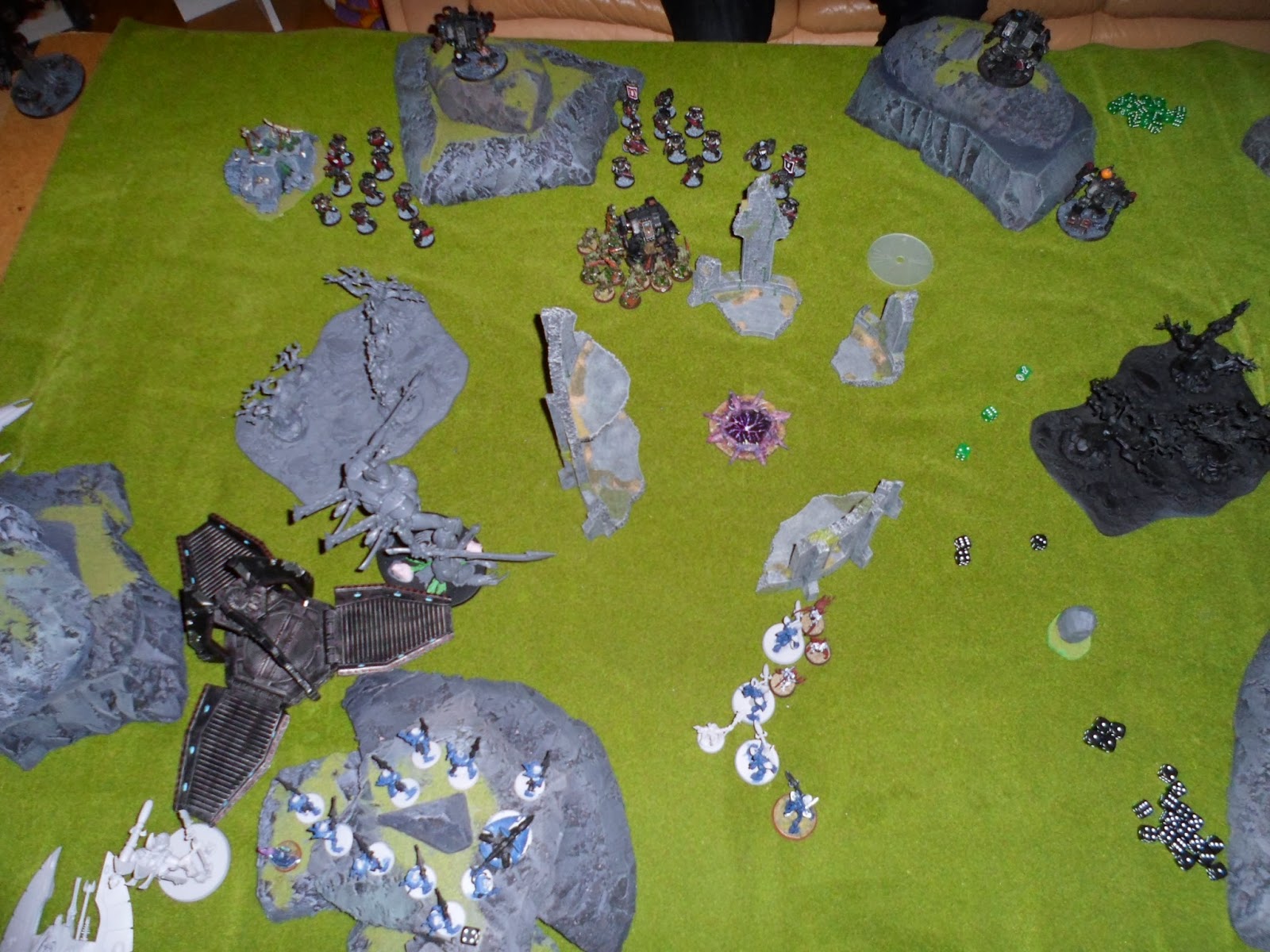 As a thank you for all the mayhem 10 Plaguebearers spawned and charged his Dread, they stood there for most of the game. Some Daemonettes spawned as well and charged my Wraithguard. 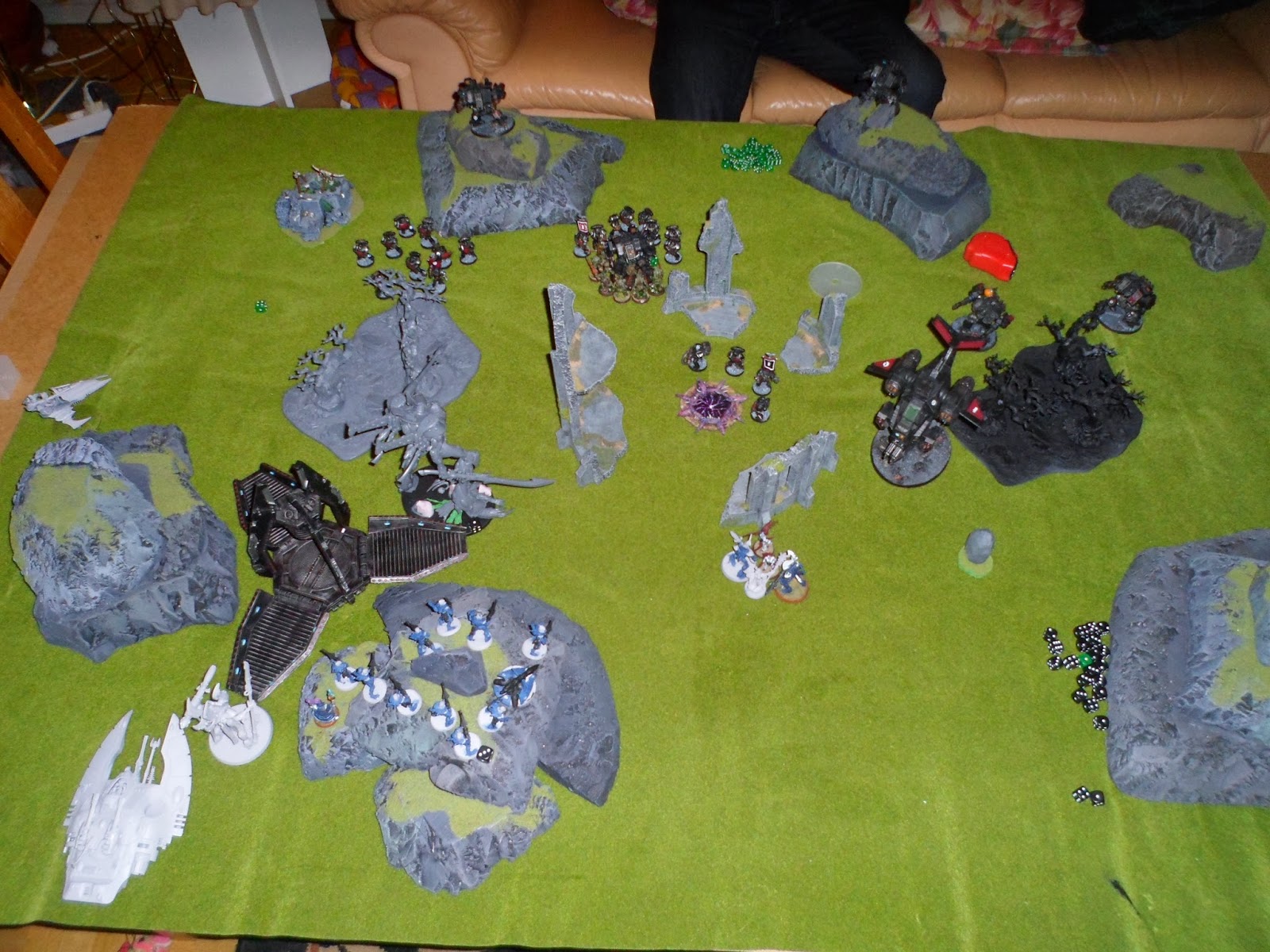 He ran to the Objective to try and get some early points, since this scenario is really mean... he also tried to support his Dread with Tacticals. Which simply meant they also ended up locked in combat for most of the game... 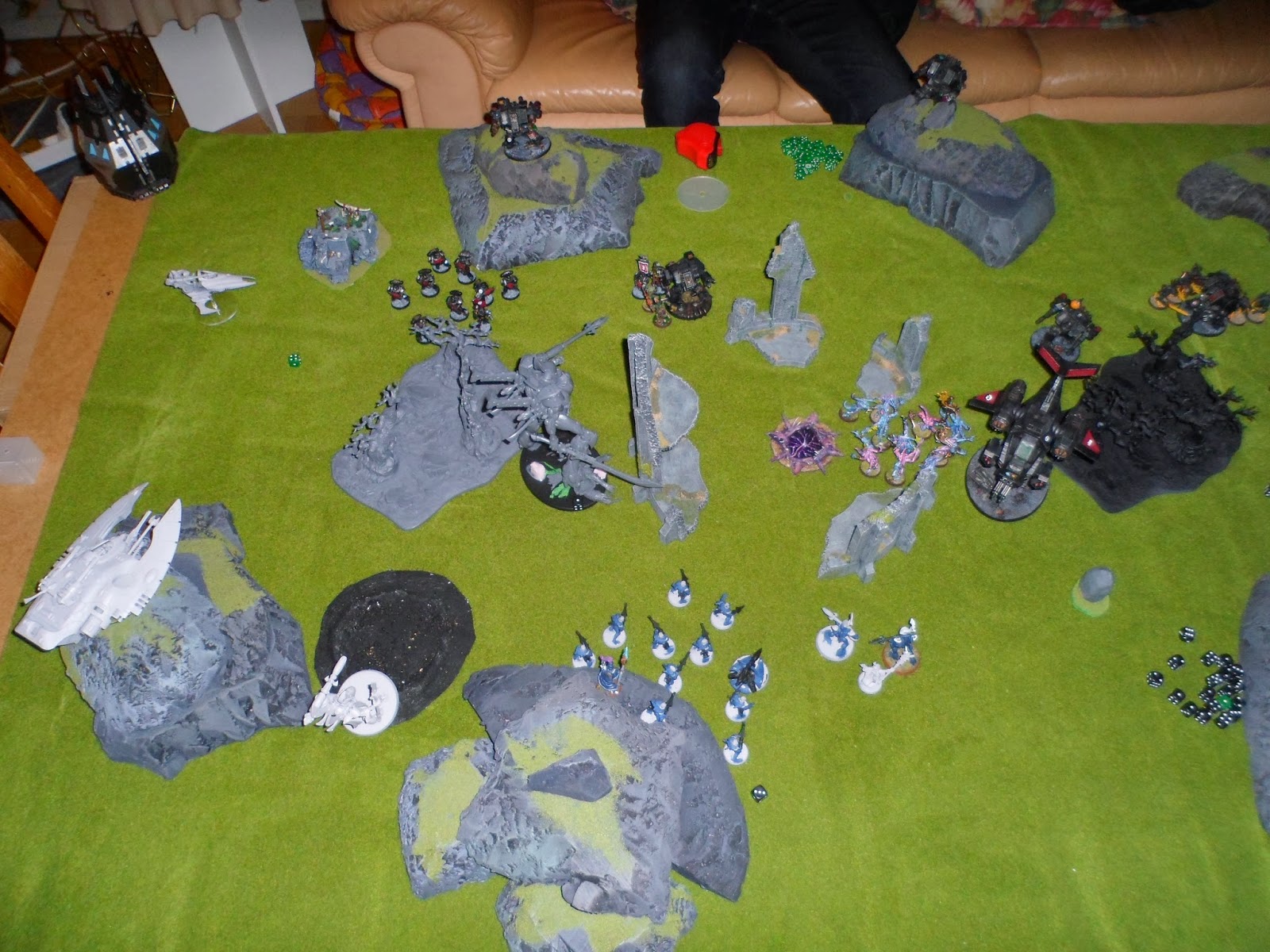 Horrors spawned from all the deaths! They started shooting around. There was also something that got teleported the same way as the Devastators did... but it misshaped, and in it's place Bloodletters spawned who ran up and charged the Dread (not that they could do anything against it after Furious Charge had gone off). 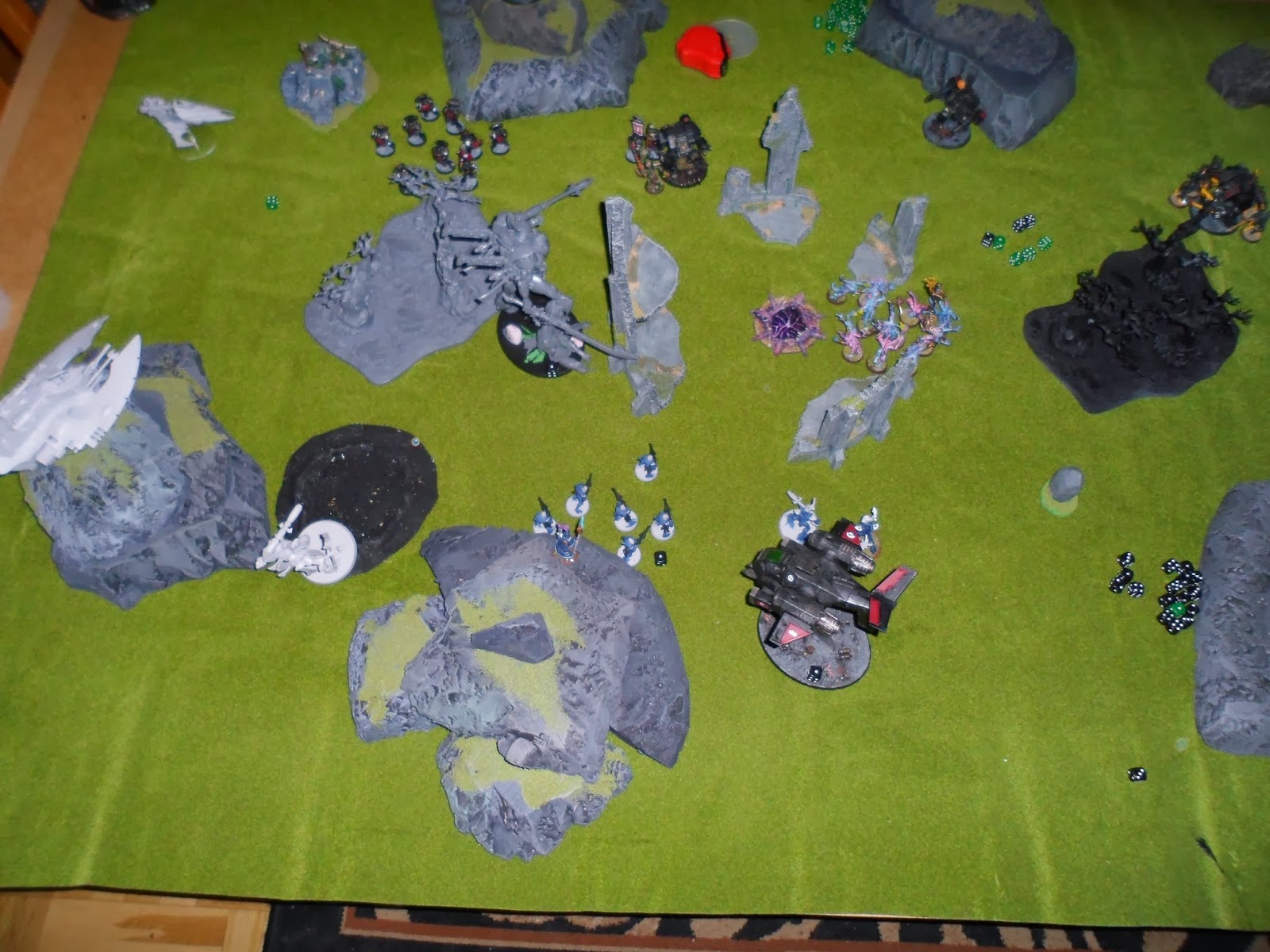 Here my opponent decided it was time to remove my invul-save and start withering down my troops... at one point I got this weird occasion that since every time you remove one of the possession tokens you have to re-roll a dice... and that meant I got to re-roll a failed armour save and stayed alive when I should've died! Weird! 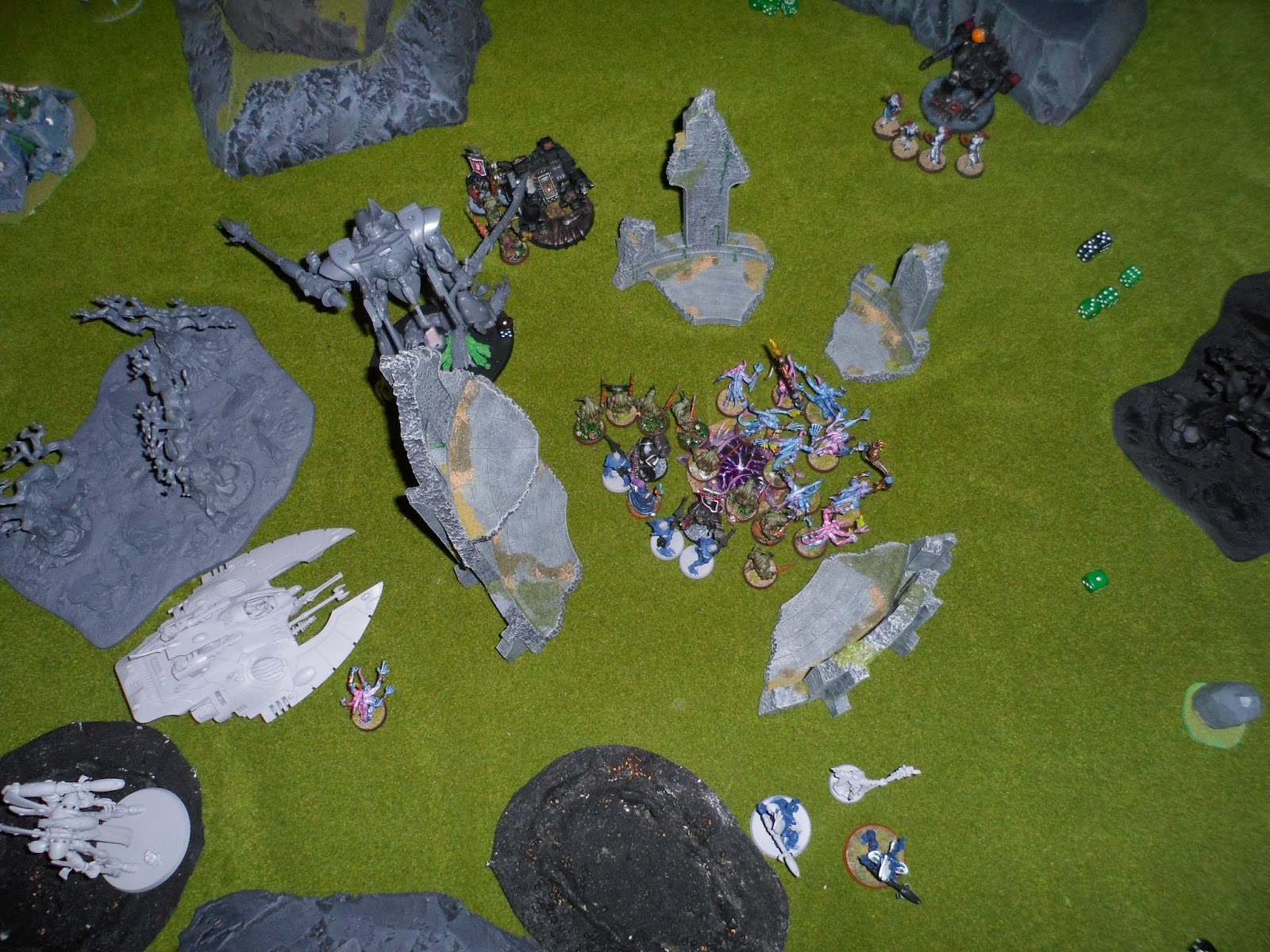 Missed a turn here... but the large squad of Tacticals were first mostly killed by the Wraithknight and then teleported on to the Objective... Plaguebearrers spawned and charged in. Guardians shot (killed a lot of Tacticals) and then charged in as well. My Warlock killed his Sergeant in a challenge, meanwhile both of our squads died to Daemons... it left us with one Space Marine, a Warlock and a Guardian. 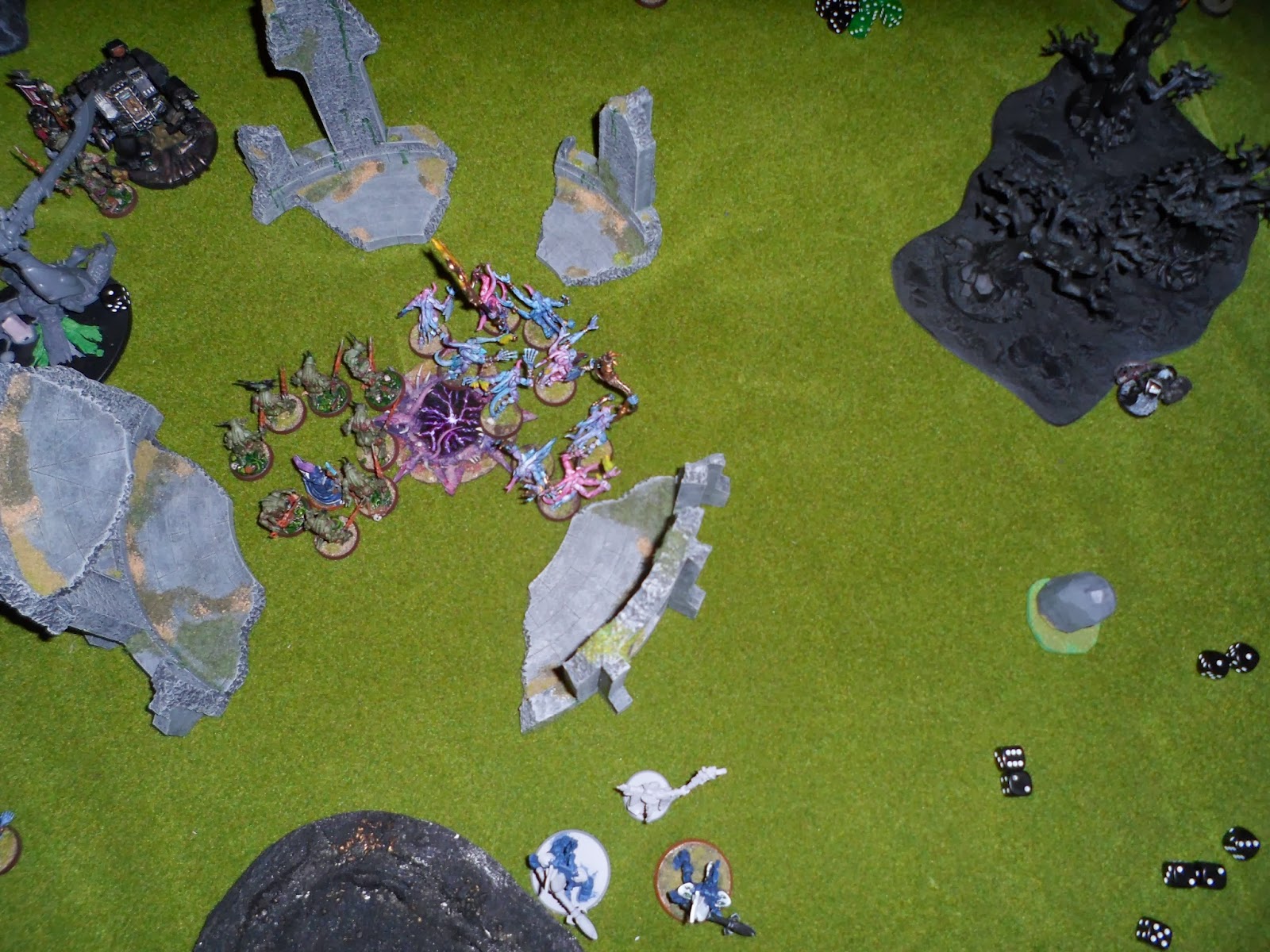 The Warlock and Guardian graciously decides to start killing Daemons sparing the Space Marine... he returns the favour by killing the last Guardian! AND THEN HE'S TELEPORTED OUT OF COMBAT. Leaving the poor Warlock to stand alone against all those Plaguebearers. What the hell! 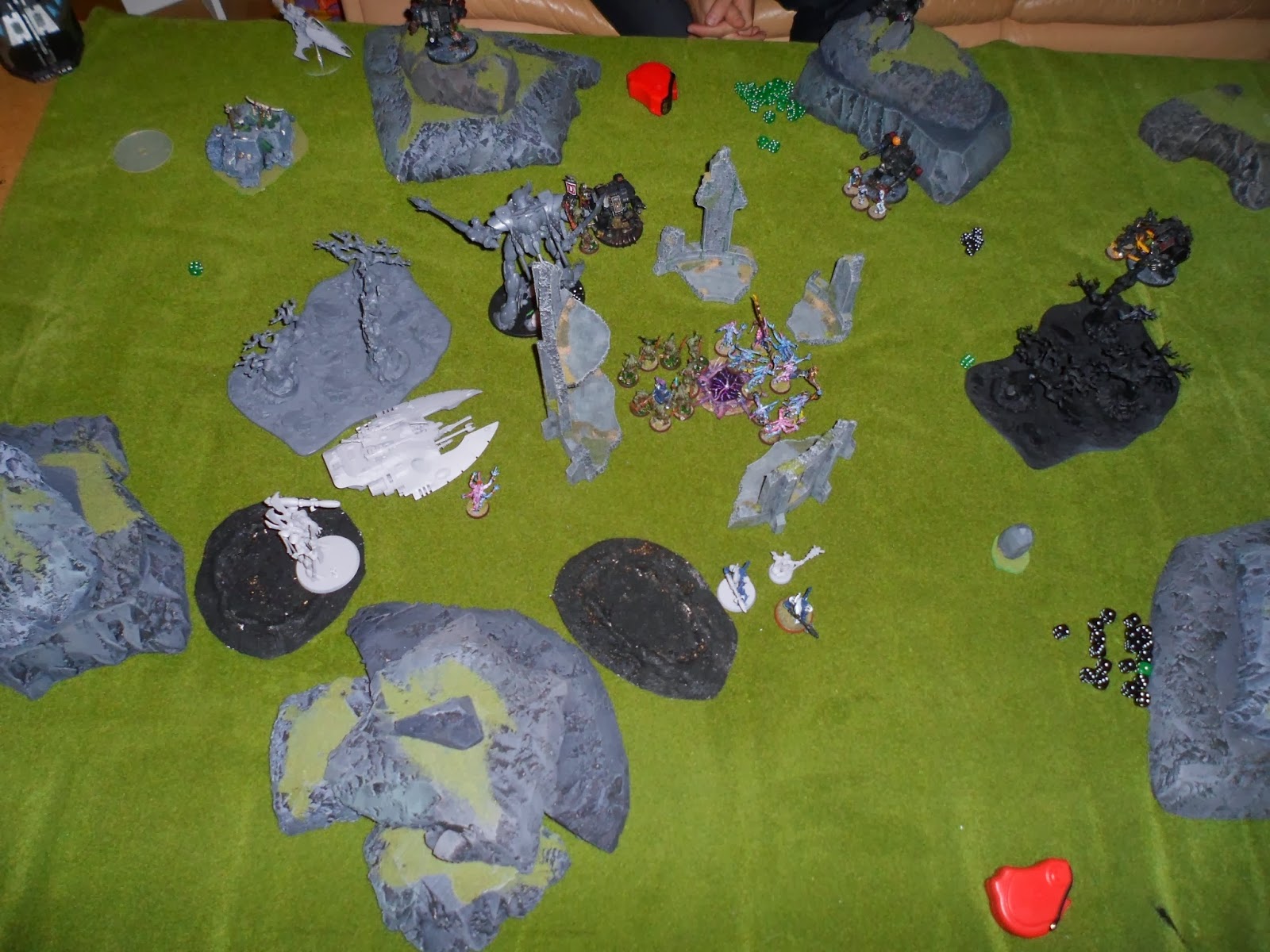 However, the Daemon World rewarded the lone Marine by turning the forest into a Razorwing Nest which dully killed him. The rest of the battle is basically a lot of spawned Daemons who stand around to die to Dreads they can't hurt. 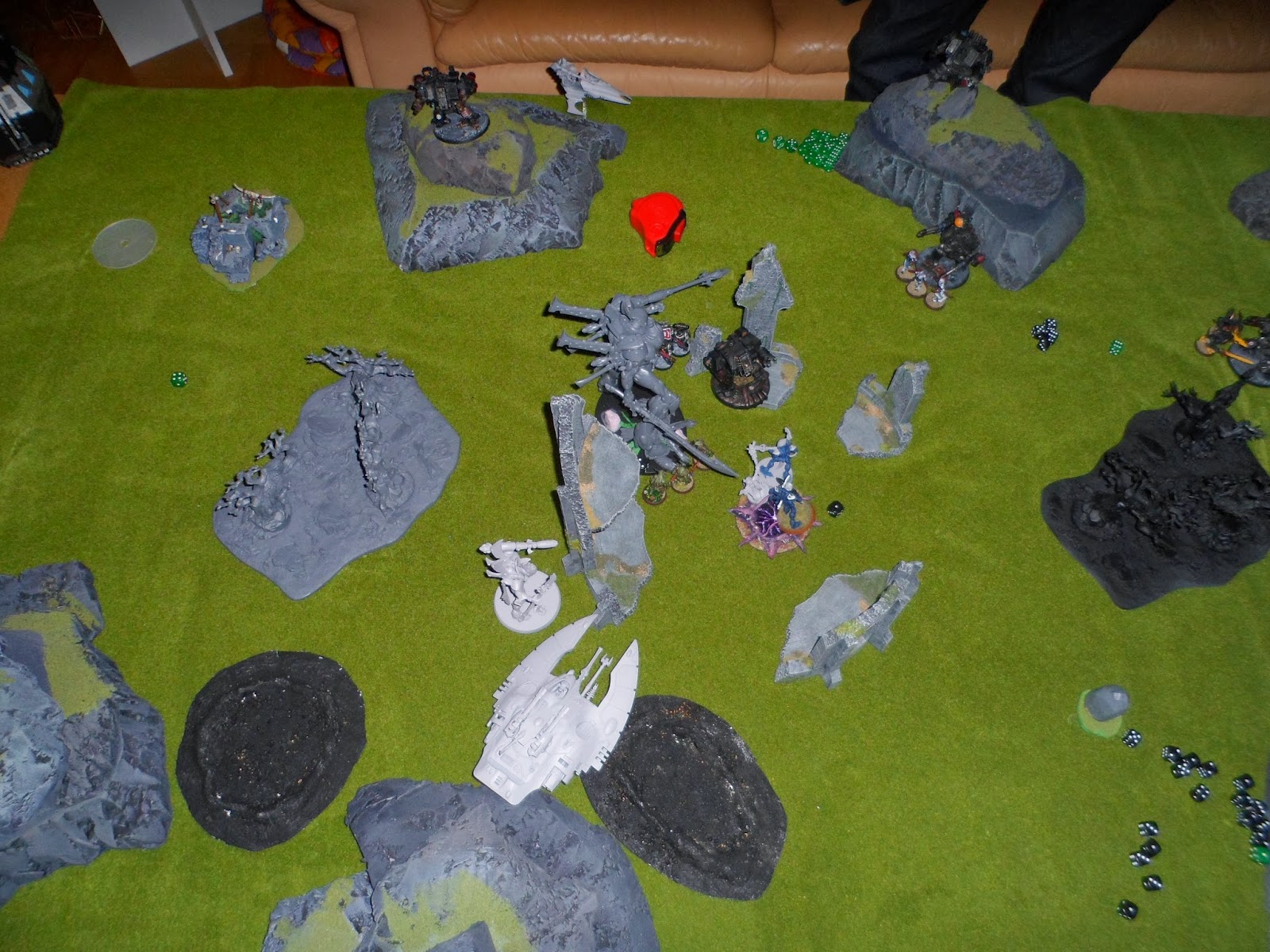 The Wraithknigt and Wraithguard clear out most of the Daemons around the Objective. The Dread and two surviving Marines (his only scoring unit left alive) finally kill the last Plaguebearers. 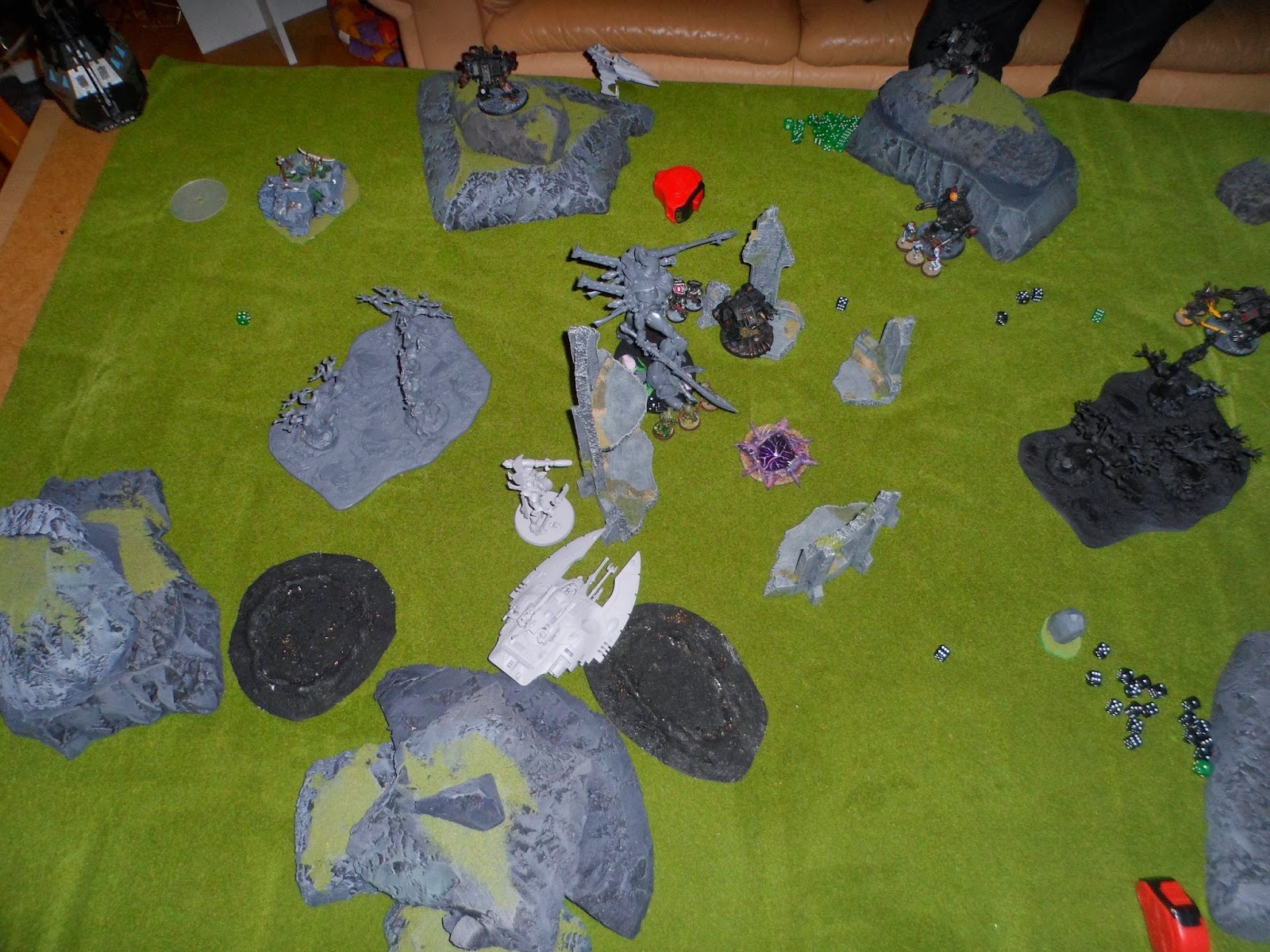 It takes all of his Shooting, but the Wraithguard are wiped out. I still have Dire Avengers in the Wave Serpent who're scoring though. 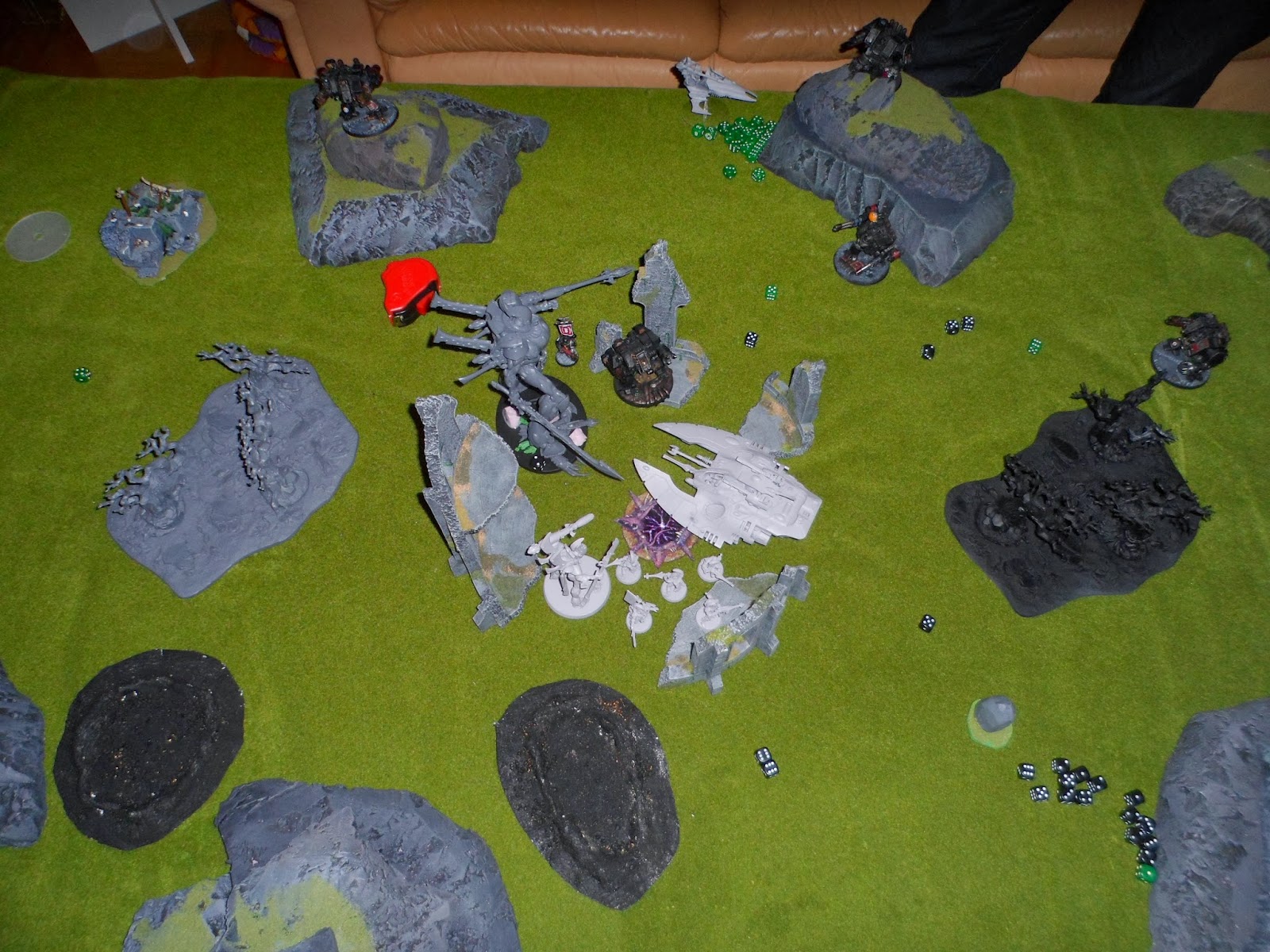 And out they come. Killing one Tactical and finishing off the last Daemons. The Dreads also finally get free out of their Daemons... so he gets some extra Shooting just when he needs it... 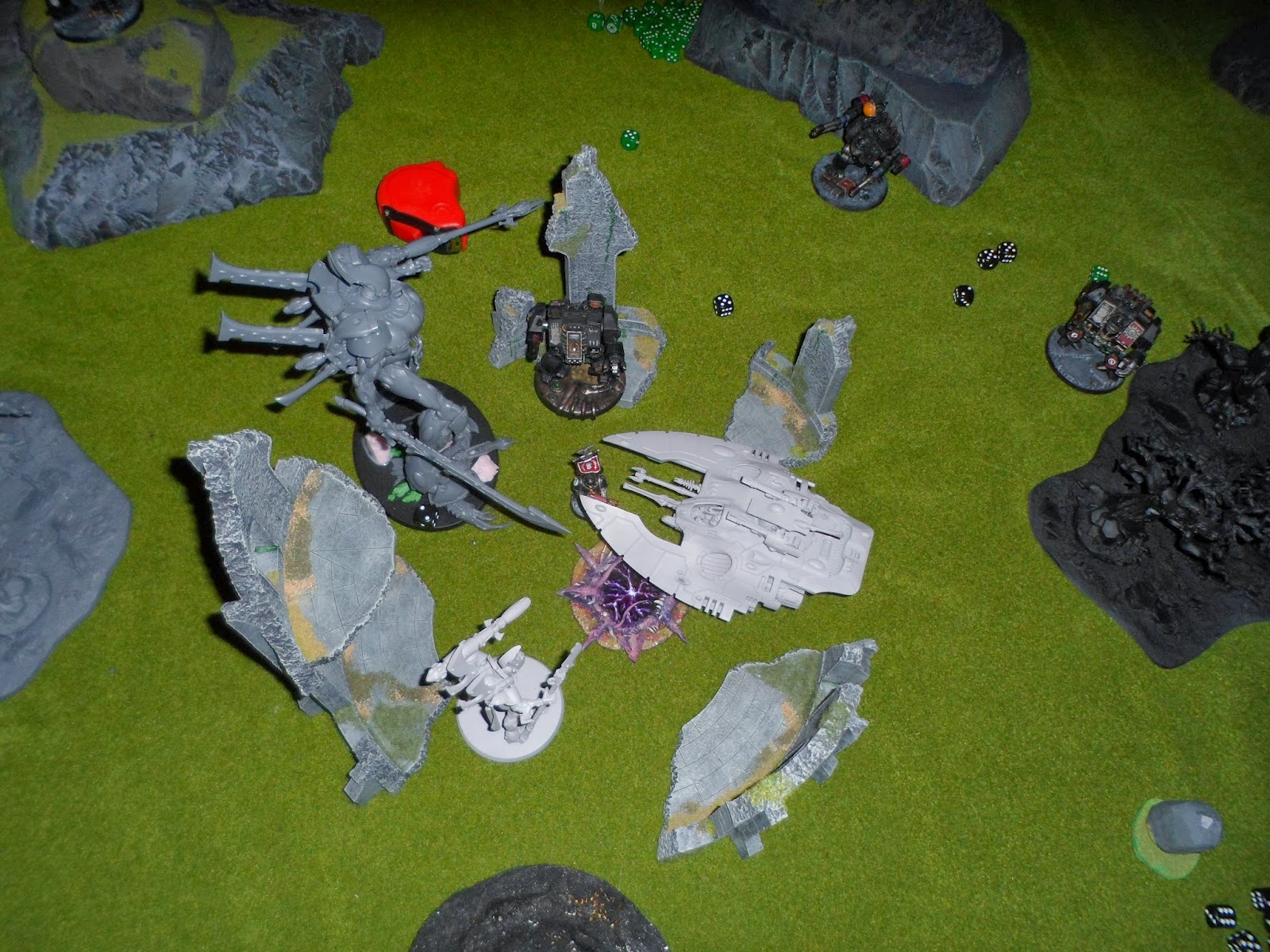 Which is enough to wipe out my Dire Avengers, just barely. His last Marine makes a run for it to try and claim the Objective for the last turn of the game... sadly for him I have last turn and the Wraithknight finish him off.

I was behind all game due to First Blood... but thanks to those Dire Avengers jumping out in turn 6 and claiming the Objective I got 6 points there... turning it around and winning the game for me! Sneaky Eldar tactics!

But I really love this Scenario, it's pure madness. There's so much weird stuff happening all the time which you just can't take into account. And there's also some room for unusual tactics, as you get these Possession counters which you have to decide when to use and remove... and then there's this mechanic where for every five models that die in a turn Daemons spawn in the middle. So the turn where I dropped off my Dire Avengers my opponent had killed three models, so if I killed more than one there would spawn Daemons in the middle who'd screw my Dire Avengers over... So I had to chose targets carefully there!