So I just finished building a lot of Cultists. The internet has decided they're terrible. I don't care much for what the Internet thinks anyway, as it's usually wrong. So I will try horde mode anyway! When building the list I basically chose stuff that I very rarely use. Just to make things interesting. So... I've not really planned this build.

Lets see if I can analyse it after making it and then see if I can make some tactical sense out of it... to just give me some hope for tomorrow (when the game is, yeah writing this the day before). First off I don't know what I'm facing... my friend said something about me not playing against his Imperial Guard so often though, so might be that... otherwise it's them Iron Hands.

So what do I have? Cultists. Lots of naked Cultists (no, not Slaaneshi-marked you perv! Just with no upgrades). A large mob of 27, another large squad of 25 and a small squad of 10. Two flamers each in the large squads. With so many Cultists on the board I felt it'd be necessary to try the Dark Apostle as well as he'll boost them all. Except for the small squad that is likely either being cannon-fodder (to send in to take Overwatch) or stay off the board and then come in and grab a backfield objective. The large mobs will simply advance forwards.

I also took a Level 3 Sorcerer. At first I thought he'd lead the other squad of Cultists... but then I thought, he's not Fearless anyway. Perhaps I should stick him in the same squad with the Dark Apostle and let him benefit from re-rolling Chaos Boons? We'll see what I do there... but the theme of the army is stuff that I don't use often... which I think will apply to my Psychic powers as well. I'm thinking something like Pyromancy and Telepathy... Making the Cultists invisible would be fun. But on the other hand Biomancy might come in handy if I'm aiming to take full effect of the re-rollable Boons... maybe one of each depending on what I roll then!

Heldrake hasn't seen any action in ages... maybe this is what'll save me this game? I also took a Forgefiend with extra plasma and Hades Autocannons. Never used those before actually. Let's see what they can do...

The rest of the Heavy Support was taking by two of my long lost faves! Predators! Not used them in ages, so that'll be fun to field! Unusually though I took full Lascannons on both. Suddenly I actually have decent anti-armour at range.

To complete the list I have a couple of Elite-slot Noise Marines in a Rhino with Blast Master and Sonic Blasters. My anti-infantry unit! So weirdly enough it seems I got most areas decently covered after all... at least in theory. This is a weird list, and it'll be fun to see what happens for sure... 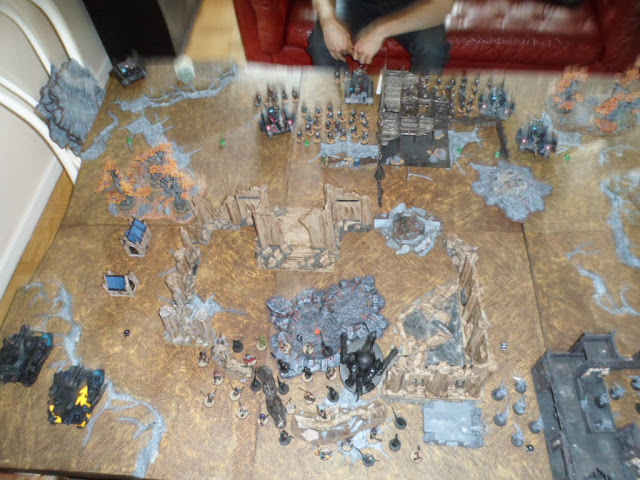 We rolled for mission, got The Relic with Dawn of War deployment. We set up a ruins-filled board, and he won to chose side. He also won to go first and chose to do so. There was Night Fighting turn 1. His Warlord trait was to redeploy a unit, and mine was Warlord causes Fear. My Sorcerer rolled twice on Telepathy and once on Pyromancy. I got Molten Beam for Pyromancy which I kept since I had a lot of armour against me. Telepathy is where it's at though, I rolled perfect and got Invisibility and Mental Fortitude (give Fearless).
With this in mind I kept the small group of Cultists off the board and joined the Sorcerer with the Dark Apostle in the largest unit on the board. Both units started in Ruins (but within 12" of the Dark Apostle). My opponent Outflanked with his Sentinel. And also used his Warlord trait to move the 20-man blob closer to the Relic. 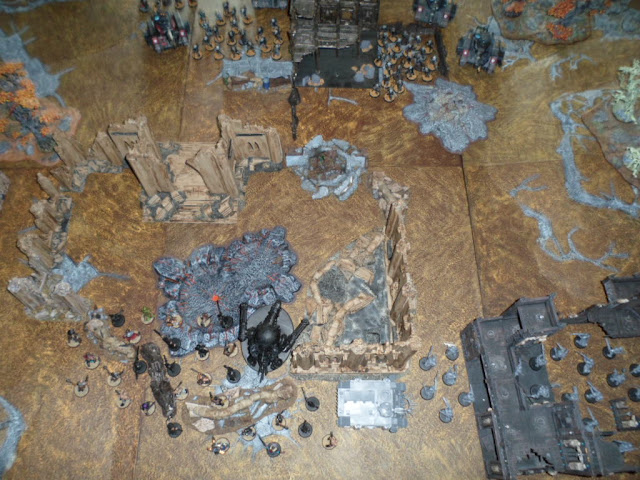 Then I stole initiative. 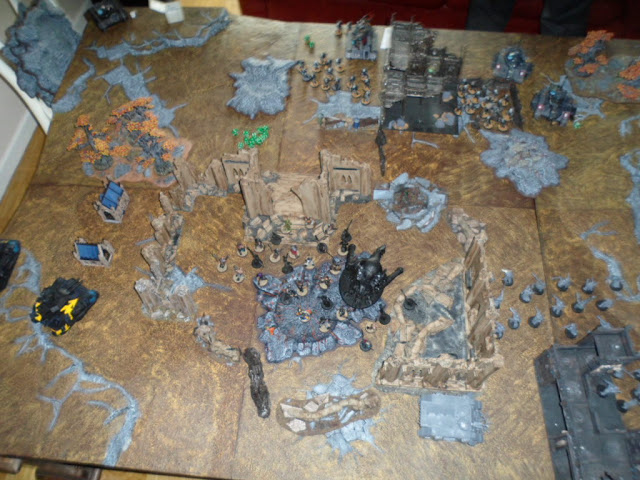 I basically cast Invisibility on the large squad of Cultists giving them 2+ cover in the area terrain, and then Mental Fortitude on the other squad giving them Fearless. Then I simply moved them forwards as fast as possible.
On my left flank I noticed that he had deployed his Basilisk completely in the open, so when I deployed I put my Las-preds on that side as well. First shot only got one pen... but at least it forced Snap shots next turn (so no Ordinance!). With that in mind I decided to shoot my other Pred at his Punisher... and it exploded. Took half a Command Squad with it (who fled off the board) and about a third of all the Veterans as well. Well, not bad for one shot!
My Forgefiend shot the large mob of Infantry, killed 5.

Oh, and I forgot about my Noise Marines. 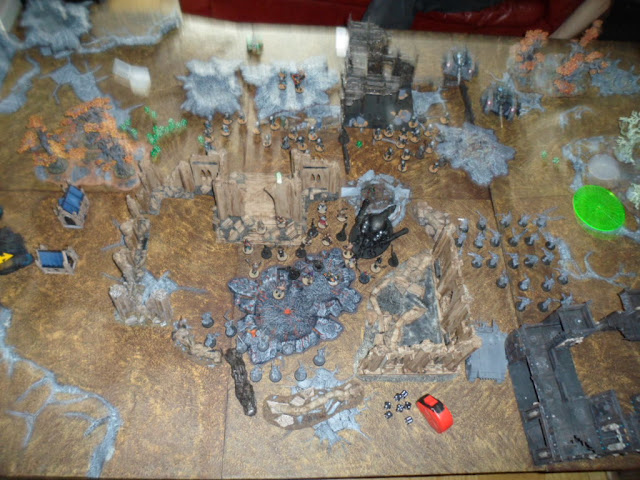 He advanced forward with all Infantry and the Chimera carrying Straken. Then the Leman Russes shot all they got at the large squad of Cultists and Forgefiend in the middle. He only managed to kill 5 Cultists (2+ is pretty good I hear) and one pen on the Forgefiend causing it to shoot snapfire next turn (I failed my Daemonic Possession save...).

Extra Cultsists arrive behind my army, but the Heldrake stays out.
Then I did the same routine with my Sorcerer and Cultists again and advanced forward. Remembered to move my Rhino, but the Noise Marines didn't do any damage anyway.
My first Pred finished off the Basilisk, and my second Pred killed the Chimera (killing the Vox Caster in the explosion). I think my Preds were hungry after not having seen any use in a very long time!
No more damage done, but my Forgefiend (who obviously missed everything since it had to shoot snap shots) managed to regain it's lost Hull Point with It Will Not Die. 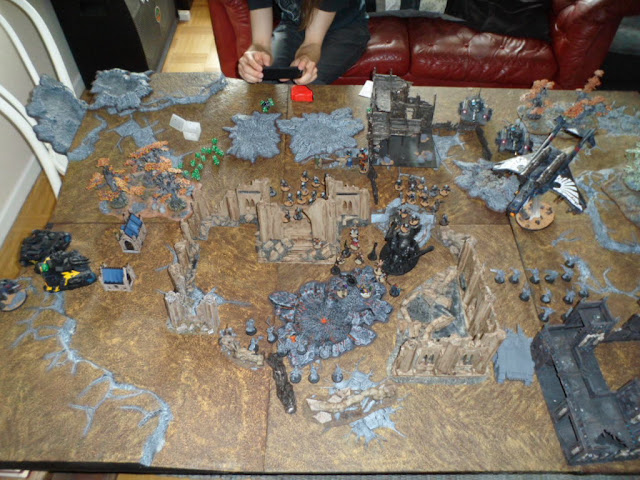 Both His Valkyrie and Sentinel arrived, and not a turn too late. It looked pretty grim at this point, so he really needed it.
His Infantry squad ran up and grabbed the Relic.
And it shot both it's Hellfire Missiles at the Fearless blob of Cultists, killed about 12 I think. The Russes however unfortunately failed their shooting this turn and didn't do much (aiming for the Forgefiend who resisted). Now the Veterans with Flamers had reached the large temple ruins, and they toasted 7 Cultists (no more 2+ for you!). The Plasma Vets took a chance shot at the Forgefiend and the only result was one of them died to Gets Hot!
The Sentinel got in behind the Predators, and actually managed to stun one of them so it couldn't move next turn! Lucky me he didn't have a full squad of those... I had really forgot about it. 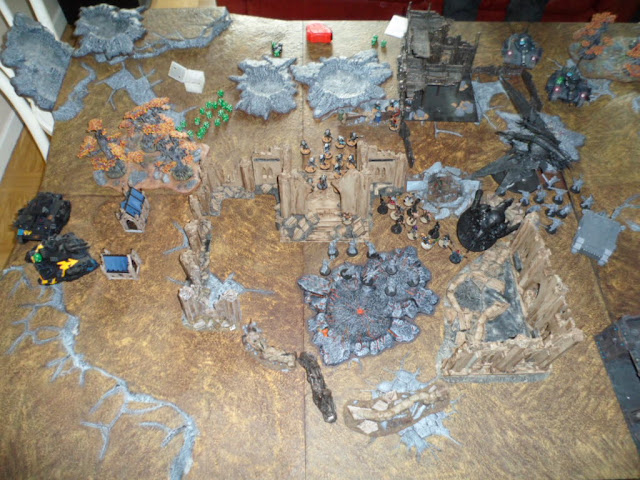 My Heldrake came in, and it too haven't seen action in a long time so of course started off gloriously by getting 4 Vectorstriking hits on the Valkyrie which made it Crash and Burn. Luckily for him it crashed right into my Fearless Cultists and killed another 5 or so...
Baleflamer+Burning Brand+2 Regular flamers took care of the Relic holders... The mobile Predator turned around and exploded the Sentinel. The other could still see through a small gap in a window and shot at a poor Plasma wielding Veteran who totally died.
The Forgefiend managed to cause a glancing hit on the front Leman Russ. 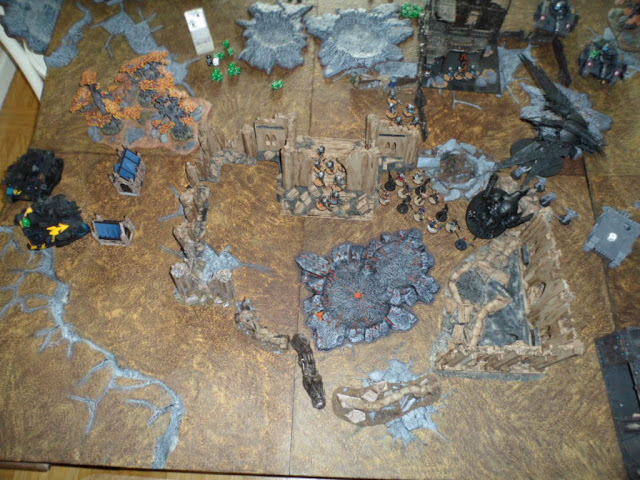 The Flamer Veterans focused on the small squad of Cultists that had gotten up close and wiped them out easily. The Leman Russes tried to bring down the Fearless mob of Cultists, but with some huge scatters they hit the other squad of Cultists (who were safe with their Invisibility) and took the extra Bolter off the Rhino instead... the Heavy Bolters killed another 7 Cultists though.
Straken ordered the remaining Plasma Veterans to Bring the Forgefiend Down. Didn't pen though.

My Invisible Cultists turned around and decided it was time to give the Veterans a taste of their own medicine and flamed back, wiping them out. Heldrake Vectorstriked at Strakens Command Squad, killed all but Straken himself. Then with my various shooting I basically cleaned up all of his units (a Pred killed one Leman Russ!) except for Straken (Noise Marines put a wound on him though) himself and one of the Leman Russes (which had 2 HP left). 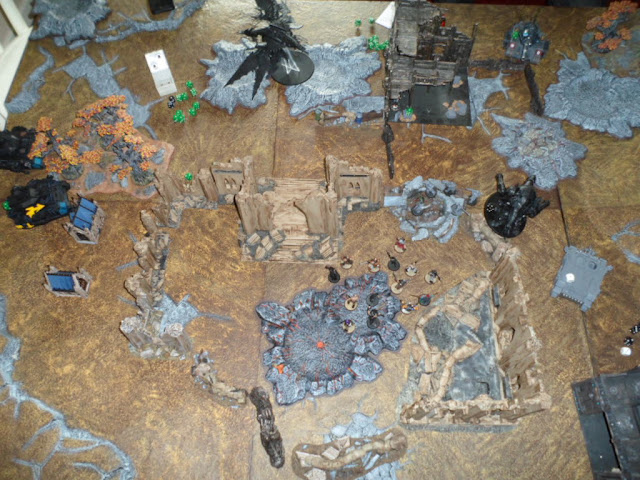 Straken in a last effort of valour charged the 5 Cultists that had grabbed the Relic last turn... I have to Challenge, he has to accept... and we both wiff it. The Leman Russ causes another Shaken on the Forgefiend but I save it and only take a HP.

I position myself to be able to charge/pick up the Relic next turn if there's one. I decided to make the unit in CC with Straken Fearless again, deciding it's better to have them there in his turn than running away. Forgefiend and Noise Marines put one glance each on the Leman Russ, making it a wreck.
Straken fails to save a wound caused by my Champion! But then strikes him down at the same initiative step. Both Fearless though.

Straken kills two Cultists (of course I take away two of the ones not holding the Relic) but in return he is swarmed and fails his last save as well.

So the final result is Chaos Victory, 5-0! (First Blood, Slay the Warlord, Relic)

So... I basically won this game when I stole initiative. It's really hard to deal with sometimes. But that combined with a mistake in deploying his Basilisk won me the game I think. I also rolled the perfect combination of Psychic Powers for this army. Since I got a large piece of area terrain in my deployment zone it means the Cultists were basically invincible! And then the Fearless-power made the Dark Apostle completely redundant. Sure, he used the Burning Brand and killed a lot of IG with it, and he made his unit Fearless... but I never used any of his special abilities. It simply never came into play. I think I'd been better off with a Slaanesh Lord making the Noise Marines scoring.
Speaking of which... I basically kept forgetting about them all game so they didn't do much at all this game... Heh.
The Predators however where MVP for sure! Punisher, Basilisk, Leman Russ, Sentinel, Chimera... They were my anti-tank and they took out every single vehicle but one! Damn good job! I've missed these guys!
Oh, and the Forgefiend was kind of crap. BS3 really hurts on this thing...
I certainly didn't expect to table him with this army... but I really got a very important head start and blocked his two most dangerous damage dealers turn one. The end-result may have been one-sided, but the game didn't feel one sided to play to me at least. I felt he was about to swing back when his Valkyrie arrive and the Flamers got in range... But in that one critical turn his Russes failed him who did really well in every other turn... ahwell!
Posted by Fagerlund at 5/24/2013 01:49:00 PM