Long time since I last played the Orks now, always a tough opponent for me. It's hard to face all those shots they can bring and deal back in turn. Our record is pretty even at the moment. This time I have some stuff I want to try that I've never tried before though so it should be interesting!

First off I have the Dark Vengeance set... and the Chosen models are just amazing. But I look at their weapons load out and wonder what the hell they were thinking? I really don't think they will work that well in any given situation... and just to prove my point I'm going to field them exactly as they are and we'll see what happens! I added some meltabombs so worst case they'll have to chase some vehicle or so. And then to show how you're supposed to do it I take another squad of five Chosen with Flamers (since I'm playing Orks, usually I take Meltas) who will outflank. The thing is I always have huge problems with Lootas, I seem to never really reach them, so lets see what some outflanking can do! And with the same mindset I also took 3 Obliterators who will Deep Strike and burn those Lootas some more (I really want them dead this game!). And since I had the points for it I also added 5 Raptors with Flamers... now that's a lot of redundancy. We'll see where they end up after his deployment!

Then I also wanted to field my Daemon Prince, since I realized I've not really played him much lately for various reasons. I expect him to be shot out of the skies as usual. But I've never tried Nurgle's Rot, so I decided that Orks would be a good way to test it out! Thus Deep Striking him in the middle of some Boys somewhere should grant some fun.

And then for the Troops I picked up a pretty solid core. One unit of Berzerkers to have him worried, driving through somewhere and one unit of Marines following in their wake with Flamers. Some Plaguemarines with Plasmas to shoot light vehicles as well as grab some objective and another small squad of Marines kept in reserve to grab another objective. As I have pretty many Deep Striking elements in this army I added Personal Icons to the Berzerkers and Plaguemarines, as it could be a nice back up plan should things turn out that way.

Another thing I've been thinking about a lot about since sixth edition arrived is some Havocs. So decided to try one squad with Heavy Bolters one Autocannon and one Missile Launcher. Usually I wouldn't like to mix the weapons like this but these are the models I have so decided to try it out and see what happens. They should be good for both taking out light vehicles as well as supporting other units with taking out Boys. And to round the list off I put my Defiler in there, always a good choice against all hordes.

So a lot of templates from me this time. If he brings the Burnawagon I might get some troubles as I don't really have a reliable way to take care of it at range (I have horrible luck with Lascannons on my Obliterators...) but hopefully I can get something around it and shoot the sides or rear at least. I also know that there's a flyer sitting on his desk waiting to be built... so maybe he'll build that one in time? I don't have any answer for it except for getting lucky with the Daemon Prince, so I will probably just try to ignore it should it show up... Let the dice gods speak!

We rolled for mission and got Purge the Alien. Great, so my objective based list is all ready at an disadvantage to the horde of boys. Not a good start! Rolled for Warlord traits, I got Acute Senses for Outflanking units and he got one that forced me to use my lowest Ld instead of highest. Neither was a big deal. Then I won the roll off for deployment and chose to go first as I wanted first turn. I realized I had one unit too much in reserve though, so I put my close combat Chosen as Inflitrators instead. There was to be no Night Fighting. Then he stole initiative.

First couple of shots cause 4 wounds on the Havos... no problem... except that I failed two saves. Pass my Leadership at least. Then the Lootas went on and caused 2 glancing hits at the Defiler. Other than that nothing much happened as he just moved up pretty much. 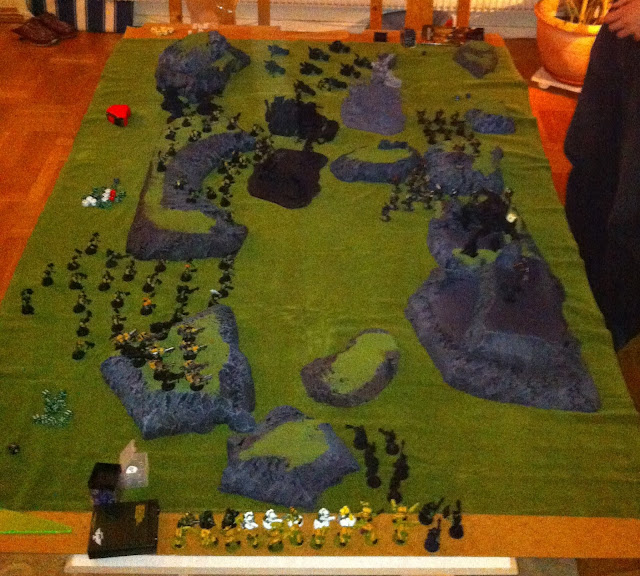 Like I wrote in the intro, I really don't like Lootas. Luckily for me he actually moved them up though. So my Chosen got to Rapid Fire them, as well as a pieplate from the Defiler, and the remaining Havocs had a go as well, wiping them out. First Blood! So my grand plan for my flamers would have to be used at Boys instead then... oh well I can live with that!

Then the Plague Marines actually managed to cause one wound on the Warboss. Not too bad! Killed a couple of Boys as well. 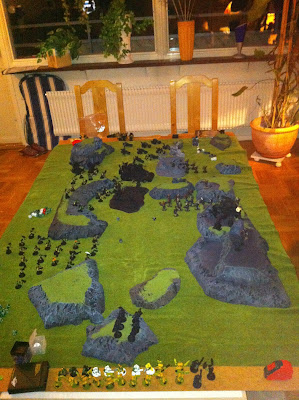 His unit of Boys came in from reserve.

His Burnawagon moved up and flamed the Berzerkers. Caused 27 wounds, I failed exactly 8 of course, statistical. He then shot the Plague Marines some, shot away 5 then assaulted the remaining 3 with the bikers and wiped them. 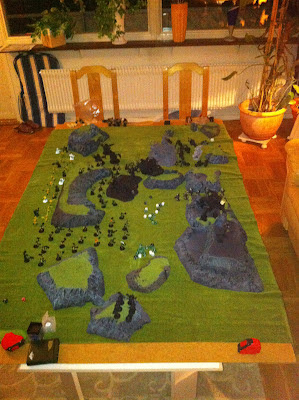 The small unit of Marines, the Obliterators and the Chosen came in. Was really hoping for the Daemon Prince at this point...

The Obliterators scattered away 8", so no melta at the Burnawagon for me. My horrible luck with lascannons made me melta the Killa Kans instead, causing a glance (...) and blowing one up. Instead I tried to shoot the Defiler at the Battlewagon... it scattered 11" and hit the Bikers instead, killing two (which both went on the nob which he failed both Look Out, Sir! rolls for). Some more boys died from shooting and then my Chosen charged the Boys, made their charge when they needed a 8. One died to Overwatch... They won the assault with five kills though, Fearless Boys sticking around. 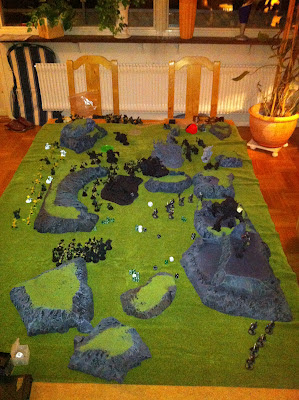 The Burnawagon moved up and flamed the Marines, I failed exactly 7 saves with 7 models left again. Everything else missed.

In the assault I killed 2 boys... and in return they caused 4 wounds (the Nob was too far away to strike still). I failed three saves... 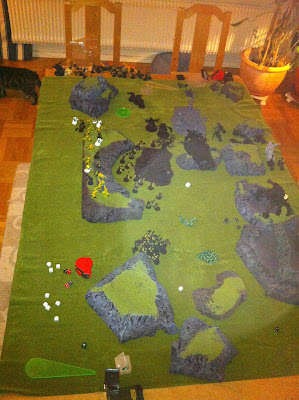 The Daemon Prince and the Raptors turned up. Both scattering 9 and 11 inches. Really bad scatters today! No mishaps though. Obliterators tried to melta the Killa Kans again for some reason, only exploding one and taking the close combat weapon off the other. Got some flamers on the boys, killing off a few. Then I tried Nurgle's Rot, passing the test... and he managed to deny it. The Obliterators wanted to finish business with the Killa Kan, but failed their assault. The Defiler turned around and flamed two bikers to death then assaulting them killing one more while Wazdakka failed to penetrate.

Lots of shooting and flaming on the Obliterators ended up with 2 survivors with 1 wound each left (due to the angles they were shot at, no shenanigans with allocation). The boys then charged in to stop them from shooting next turn losing a boy or two for the trouble. The Warlord then killed the Defiler while two bikers died in return. Boys shot at my Daemon Prince, grounding him causing a wound, of course. 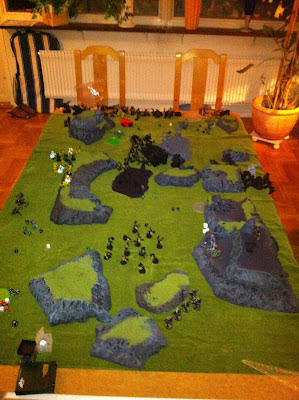 Nurlge's Rot killed two boys, woho! Havocs and Marines shot at the boys at the bottom, taking them below Fearless but they passed their Leadership. The Chosen and Raptors moved up to flame the unit of boys, then both charged in and made their charges. I probably should've done the charges in the other order though as 2 Raptors died to Overwatch... Still won combat and the Fearless boys stuck around. 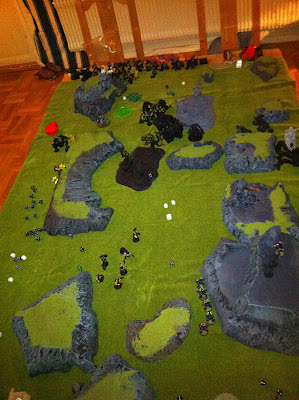 Night Fighting happened, not that it had any effect. Bikers shot off the last Havocs with help from the Boys. Then all but one Chosen died (the survivor fled) and the Obliterators died to the Power Klaw that finally reached combat.

The Marines moved up to try and finish those Boys that refused to die, killing all but two who of course passed their Leadership. The Daemon Prince could only Vector Strike at the boys due to the angle, killed 3 though. And that was all. At this point I had the Daemon Prince, 5 Marines and one Chosen (fleeing) on the board while the orks had every single unit still alive except for the Lootas. So I conceded since there was no way I could finish off enough units to make it somehow even. Crushing victory for the Burnawagon!

Don't build a list that ignores the Burnawagon when you know it will probably come. Yes, I had the Obliterators and they probably could have done something and I tried - but the scatter was ridiculous! Had I known that the Lootas would die so hard in turn one though I would've deployed the Obliterators instead of Deep Striking them. Perhaps my luck with Lascannons will turn at some point?

Flying and Nurgle's Rot doesn't go well together. For it to be effective you probably have to charge in and let them come closer to you... Flying around it's hard to get in a good spot where you can kill many models.

Special Close Combat on Chosen are (as expected) not worth it. They did way more damage with their Bolters! Infiltrate and Rapid Fire is a nice combination, perhaps I should try "naked" Chosen at some point just to see what happens?

And then one lesson I seem to never learn... Don't put too much stuff in reserve... it means you really depend on those reserve rolls... one or two units at most! (But it's so funny to show up in the opponents face from nowhere!)

Havocs need a very good deployment to do something. In this game they ended up far away from all light vehicles as well as bikers which were their primary targets. Perhaps I should've chosen to deploy second and hope to survive turn 1 just to get to counter-deploy. It gets a lot more important when you have shooty units after all.