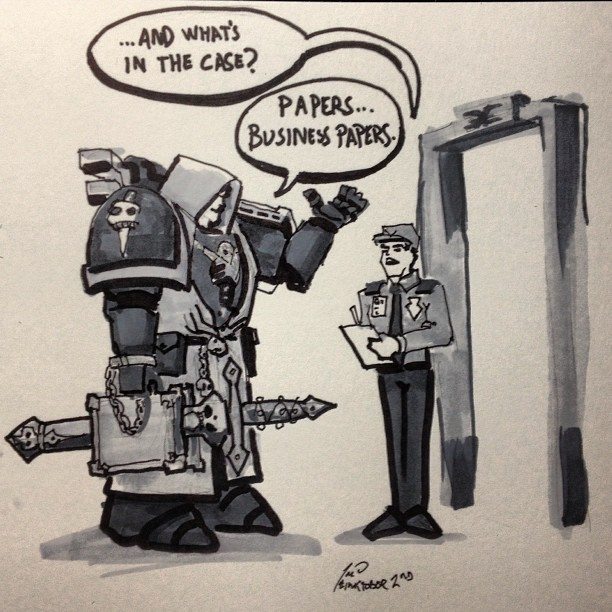 So he's finally here! Cypher, the man! Of course I had to get this as soon as I saw it. So lets have a quick look at this one.

First of all, it's not only Cypher. Those who remember his old rules might also remember that you were allowed to take him with a unit of Fallen back then... and this is true now as well! You get two choices of how to field him. Either alone as an option that takes no Force-org slot, or as part of a formation (only for CSM) which is him and 1-3 units of Chosen whose special rule is Infiltrate! So in other words, back to the old codex version of Chosen!
In addition, models from this Formation within 12" of Cypher gets to use his Leadership as well as gain And They Shall Know No Fear! Let's that sink in for a bit while we look at Cypher's special rules for a bit.

So the other way to field him is as a lone model... but in what armies? This is a pretty odd one for me personally at least! I'll just cite the text here:

Cypher can be selected as part of a primary detachment from the following codexes: Codex: Adepta Sororitas, Codex: Blood Angels, Codex: Chaos Space Marines, Codex: Grey Knights, Codex: Imperial Guard, Codex: Inquisition, Codex: Space Marines or Codex: Space Wolves. Cypher does not take up any slots from the detachment’s Force Organisation chart. He may not be included in an army that includes any models from Codex: Dark Angels.

...so you can't ally in Cypher (notice primary detatchment in the wording). And a lot of Space Marines get him. What? And another point, he can never be the Warlord of any army... and in addition to that he gives your Warlord -1Ld. He really does sow confusion and dissent all around him!

Points wise he's quite expensive, almost 200 points, but he's quite a beast for being a single Power Armoured model. His statline is pretty insane with WS7 and BS10 as well as I8. Only 3A though (he does have 2 pistols though, and I'm not sure if that'd give him +1A?), but he is still pretty capable of going up against a monster. Speaking of his Pistols, he uses them for everything, even in close combat. Which means that half of his attacks (rounding up) are S4 AP5 and the rest are S7 AP2. Narrative mechanic? Yes. What about shooting the guns then? He can shoot each pistol twice in the Shooting Phase, or he can run AND shoot one shot from each. His Plasma doesn't get hot, and his Bolt Pistol has 16" range instead of 12". In addition to this he shoots Overwatch on his FULL BALLISTIC, however the way the rule is stated it seems like only one shot from each gun there. He does have the sword as well, but he can't use it - instead it grants him Eternal Warrior and Shrouded.

In addition to this he also has And They Shall Know No Fear, Hit&Run, Infiltrate, Fleet and Independent Character special rules. I see the potential for Deathstars infiltrating up the board who can't be held up in CC unless you want them too (because I8 and Hit&Run!). Cypher will also make sure that if you break, you will be swept (again, I8 is hard to run away from!). Adding ATKNF is also a huge boon to CSM, meaning they in turn can't be swept or truly broken! I see some interesting combinations emerging here that's for sure.

However, I'd not call this a competitive character - he's most definitely a narrative one. Full of Cool basically. Especially since he also has some special rules that grants Zealot to Dark Angels and Victory Points for capturing him alive to any army etc. But with that said I do believe you can make some mean lists with him included. But he's lacking an invulnerability save and only has Power Armour, so despite being Eternal Warrior he's not that durable.

The rest of the book then? I've not read it yet, because there's actually quite a lot more than I expected here. There's quite a lot of background actually, some ten pages or so maybe? Which both includes the story of Cypher and a timeline of events as well as short stories where he's involved. Really neat!

And it that's not all either, there's also 3 Altar of War missions as well as 3 Echoes of War mission included! Ie, three generic scenarios where you can include Cypher and three more specific ones! The generic ones have some really funky special rules, such as forcing reserves to come on on turn 4 and having Cypher hidden in a unit and the point is to get him off the board or a really cool one where you generate a normal mission from the BRB and adds an additional Objective (Cypher's Objective) which then has a random effect. I really like the look of these missions and I look forward to testing them in action!

In other words, this dataslate is packed with stuff. So I can totally recommend it if you want to add some variety in your games, or fielding a really cool character. For competitive play I'm guessing CSM will have the most use out of him, as he does add some cool boons there, especially with the Fallen Formation. But again, these are my first impressions so I might very well have missed something. :)
Posted by Fagerlund at 12/25/2013 10:42:00 AM