Got a small game in tomorrow vs the new Eldar. To get a feel for them!

So I basically just threw something together. As I'm back in love with my lovely Preds both went in. Autocannon-versions this time though, and lots of dakka. In with three Obliterators, because... you can't go wrong with Obliterators. To lead I went with the Warpsmith... simply because I felt like it. He could also be useful to repair those Preds.

Then full horde mode. 35 Cultists and 15 Chaos Marines. Lets see how much fire power those pointy ears have at 1000 points...

Eldar (Don't remember all of his upgrades, but something like this)
HQ
Farseer
Farseer - Singing Spear

We rolled for Dawn of War, The Relic. He chose table sides, he won roll off to decide who goes first and let me deploy first.
I got Warlord trait that my Warlord and unit got Soulblaze in CC, he got one of the one use things which I don't remember since he didn't use it. He rolled twice on Divination and once on Telepathy for both Farseers, one got Psychic Shriek, Precognition and Prescience, the other got Hallucination, Misfortune and Precognition. No night fighting for turn 1, he didn't steal initiative.
Oh, and I basically forgot about taking pictures after deployment. sorry for that!

Well, since he hid in a corner I basically moved everything up. I moved my Preds side-ways to get some shots off at his closest Wave Serpent. I actually wrecked it, but then he remembered he had Holofields and luckily for him he had rolled all 4's on his Cover saves. So back to life it went! (This is why the Dire Avengers are piled out on the picture... he realised right after). So not too eventful first turn.

He split up his Wave Serpents to come around to ruins one on each side and the Fire Prism just moved a bit to get it's Jink basically.
He let loose his... shields (seriously, what's up with that?) at one of my Predators. He managed two Hull points on one of them. Not too bad for me. The Fire Prism whiffed. 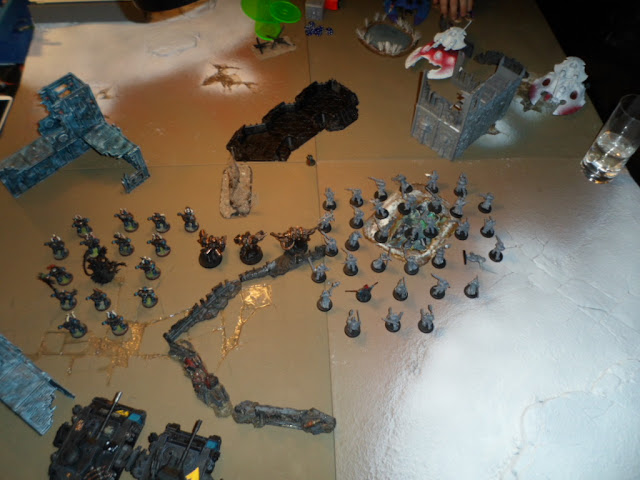 The Cultists grabbed the Relic and tried to stay with the closest models in Area terrain so I could go to Ground with them... The Chaos Marines moved up.
Both Predators shot Autocannons at the same Wave Serpent from last turn, only managed to get one HP off it and forcing it to shoot Snap Fire next turn (I think we forgot this though). The Obliterators moved up into Multi-melta range of the Fire Prism... all hit... and two ones and a two for pens... bah.
Plasma Guns on the CSM tried at the Wave Serpent as well... two Gets Hot. One died. Awesome.

He unloaded both Dire Avengers, one of them got Prescienced, both Precog'd (he did this last turn too by the way), and again shuffled the Fire Prism.
Dire Avengers let loose at the Cultists... but after Go to Ground I think only 5 or 6 died in the end (three to Psychic Shriek). The Fire Prism killed 3 Marines, and the Wave Serpents finished off the damaged Predator for First Blood. He forgot he could run after shooting though, so was left in the open.

I shot everything at the Dire Avengers closest to the middle, Assault Cannons from Obliterators, Havoc Launcher, Autocannon, Heavy Bolters, snap firing Cultists and Marines (plasma got hot again). That 4++ made it so that the Farseer had one wound left and four Dire Avengers were left standing afterwards though. Not so awesome.

He Precog'd up, but failed Prescience this time. The Wave Serpents spread out, one went into my corner to get side armour on my Pred, the other moved up closer to the shuffling Warp Prism. The Wounded Farseer and Dire Avengers shot at Cultsists and then ran into cover. The other squad moved closer instead while shooting, and left around 15 Cultists left that passed their morale. The Fire Prism and Wave Serpent shot at the Obliterators and killed two (one had taken a wound in the turn before, but can't remember from what... might've been Dire Avengers).
The large squad of Dire Avengers then charged the Cultists who killed one on Overwatch (they were damn good at snap fire this game). The Exarch challenged my Champion and chopped him down. The others killed five cultists. The remaining ten or so Cultists killed four Dire Avengers in return. But I still failed my Ld-test and was easily swept.

I moved the Chaos Marines into the area terrain in the middle, close to the dropped Relic, and the Obliterator turned around and moved towards the Dire Avengers that had killed the Cultists. I was planning to flame them... but the Predator rocked this round and killed all but one DA and the Farseer... the Obliterator shot plasma at them instead hoping to ID the Farseer, but only killed the DA instead. The CSM squad shot at the other squad of DA but no wounds caused (got hot plasma again...).
The Obliterator then charged the Warlord Farseer, saved his attacks and squished him with the Power Fists (only one wound went through, but enough to ID him!). He had the item that made him explode and try to steal your soul and come back, but turns out Obliterators doesn't have any souls. So Slay the Warlord for me!

Dire Avengers moved back towards his table edge to get the most out of terrain, the Farseer rejoined them (he had previously went into hiding behind the ruins). The Wave Serpent at my side finally managed to finish off my Predator. The fire Prism killed a couple of Marines and put a wound on my Warlord.

I grabbed the Relic, moved up with the Obliterator. Shot Lascannon at his Fire Prism, but failed to do anything. At this point I had 5 Marines, Warpsmith and the Obliterator left. But I had the Relic, so a 4-1 lead. He had a lot of fire power left though...

He tried to cast Misfortune on my Marines, but was denied. Everything shot at them anyway. Leaving only the Warpsmith left. Which was actually good for me, because with the Icon of Vengeance gone he was no longer Fearless and could thus go to ground in area terrain for that scary Fire Prism shooting. In the end I only took one wound, so I had the Warpsmith left with one wound and one Obliterator. We rolled to see if it ended, and it did. So a draw! He got First Blood, I got Slay the Warlord.


Lessons Learnt
So again a draw against these Eldar... we seem to play pretty evenly. All though in this game the dice did not help me... Turn two I SHOULD have killed his Fire Prism with three bloody melta shots, that would've given me First Blood and gotten rid of his scariest fire platform. But no...
So what I've learnt is that the new Eldar tanks are pretty damn tough. Holofields and AV12 makes them quite durable indeed. They also bring quite a lot of shooting as well. And those fast skimmers really make up for the short range of the infantry...
The Dire Avengers didn't scare me though. Maybe it's just because I had a lot of Cultists, but their shooting didn't feel very dangerous... and they absolutely folded in close combat.
On the tactical side... he really put my Marines mostly out of the action by deploying on the other side from them. My Warpsmith was never in range to actually do anything. When I had the chance to move up and try to blow up his Fire Prism with him I had to move back towards the middle and go for the Relic since the Cultists were gone. Smart play on him, those Rapid Fire bolters and flamer would've been death on his Dire Avengers, 4++ or no 4++.