2 games of Flying Circus vs Eldar

So over at The Warmaster-forums user bladesteel, a fellow swede among all Americans found me and challenged me to a game or two. Turned out to be two. He brought Eldar and I tried out a Flying Circus for the first time, as well as Be'lakor.

Again, these are old games and I can't remember the powers rolled or gifts etc... so take it as you will!

Daemons:
Be'lakor
Keeper of Secrets (With Portalglyph)
2 units of Daemonettes
10 Seekers
3 Slaanesh Princes (the Gray one has Grimoire, the other two lashes)

Hammer and Anvil, The Relic.

I deployed very defensively (you can't even see all of my army on the pictures...), hiding far back and Troops in Reserve as well as Outflanking Seekers.
He deployed pretty aggressive, keeping his Jetbikes in reserve. 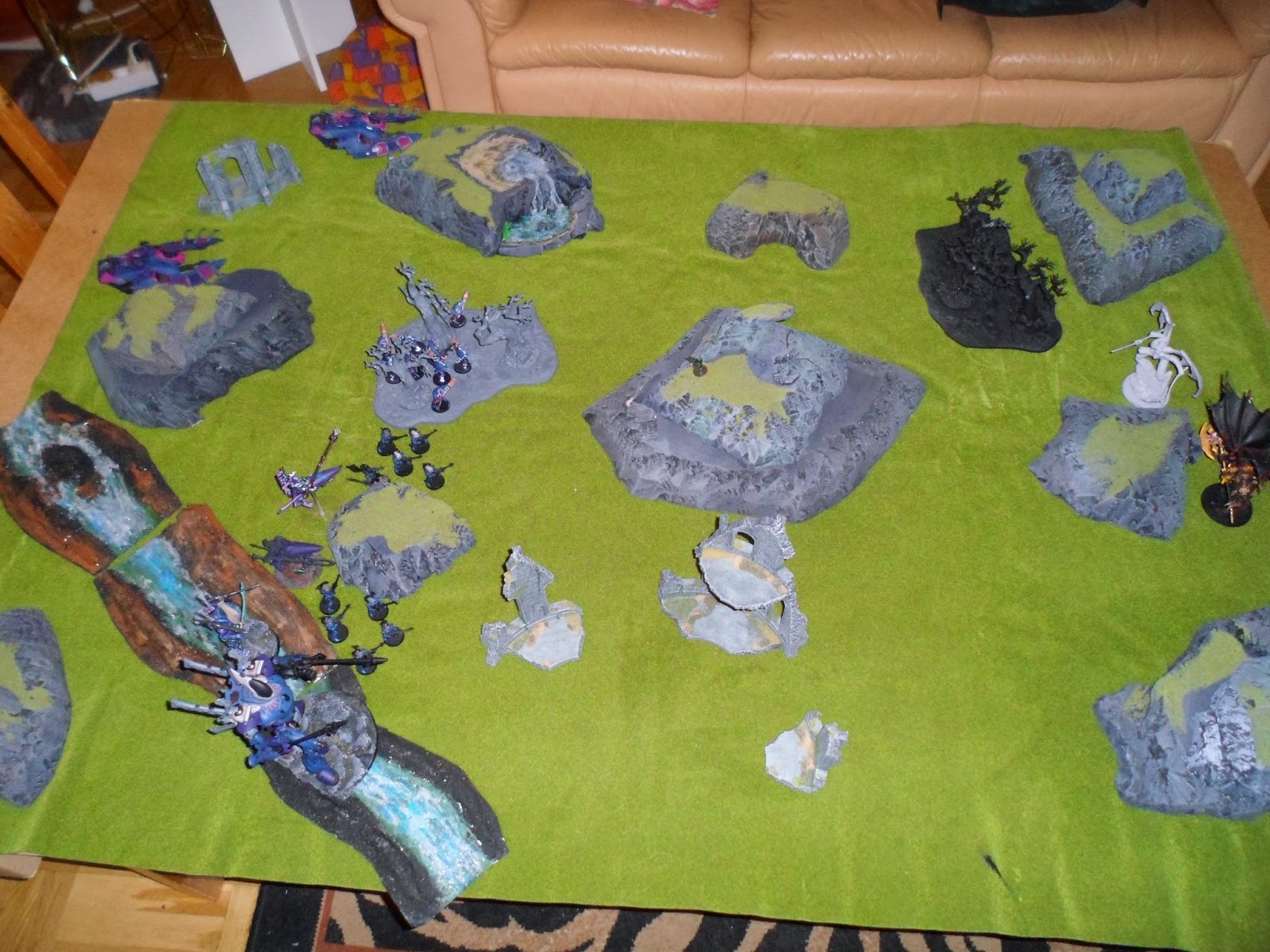 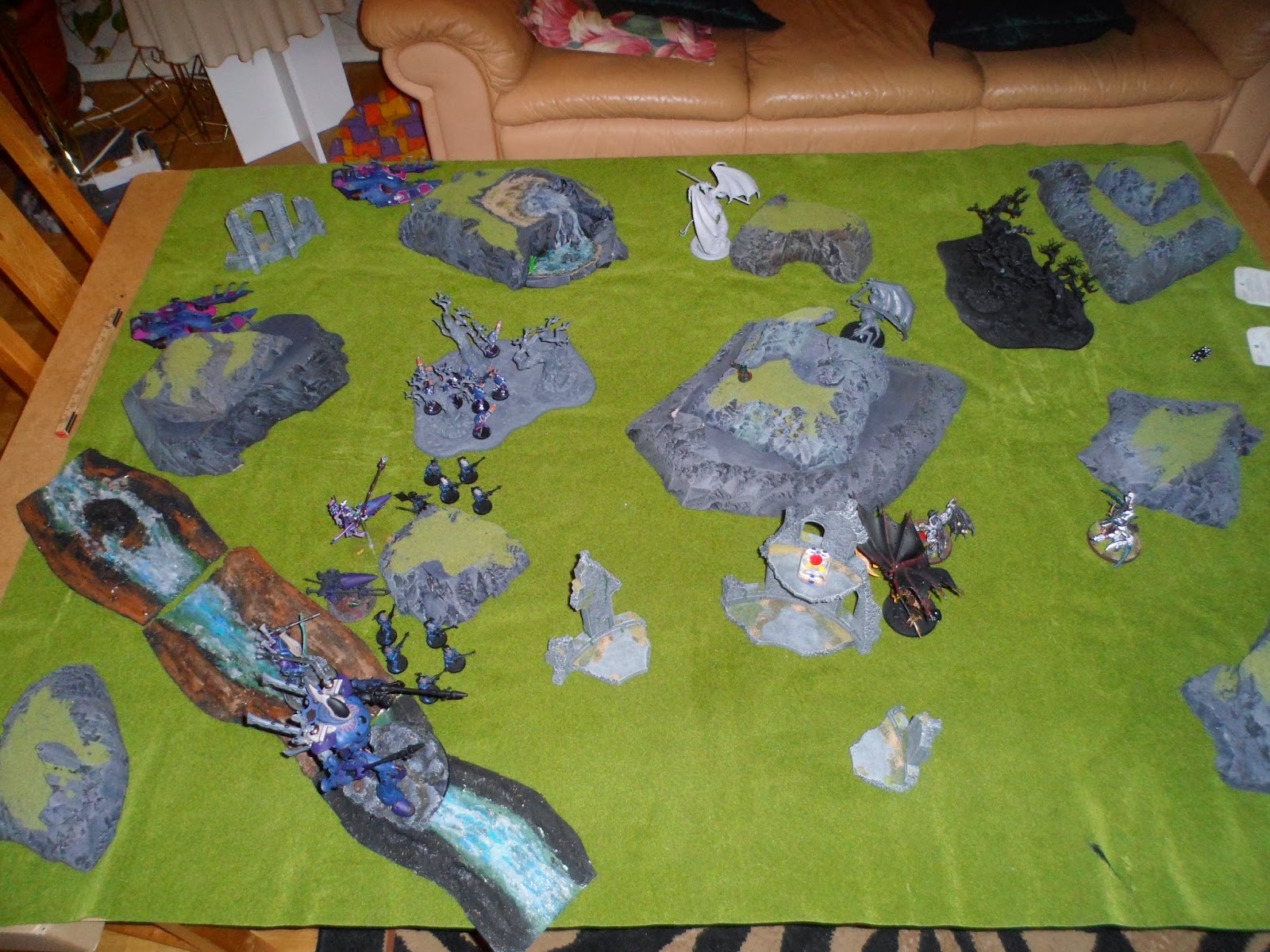 For some reason I split my army up here, Be'lakor and one Prince (who had Eternal Warrior due to Iron Arm) goes on one flank and the other two goes up the other flank. Huge mistake. Don't split up a Flying Circus.
Be'lakor Puppet Master the Wraithknight and unleashes the Wraithcannons on the visible Wave Serpent. He made his Cover save from Night Fighting on both pens. Ah well. 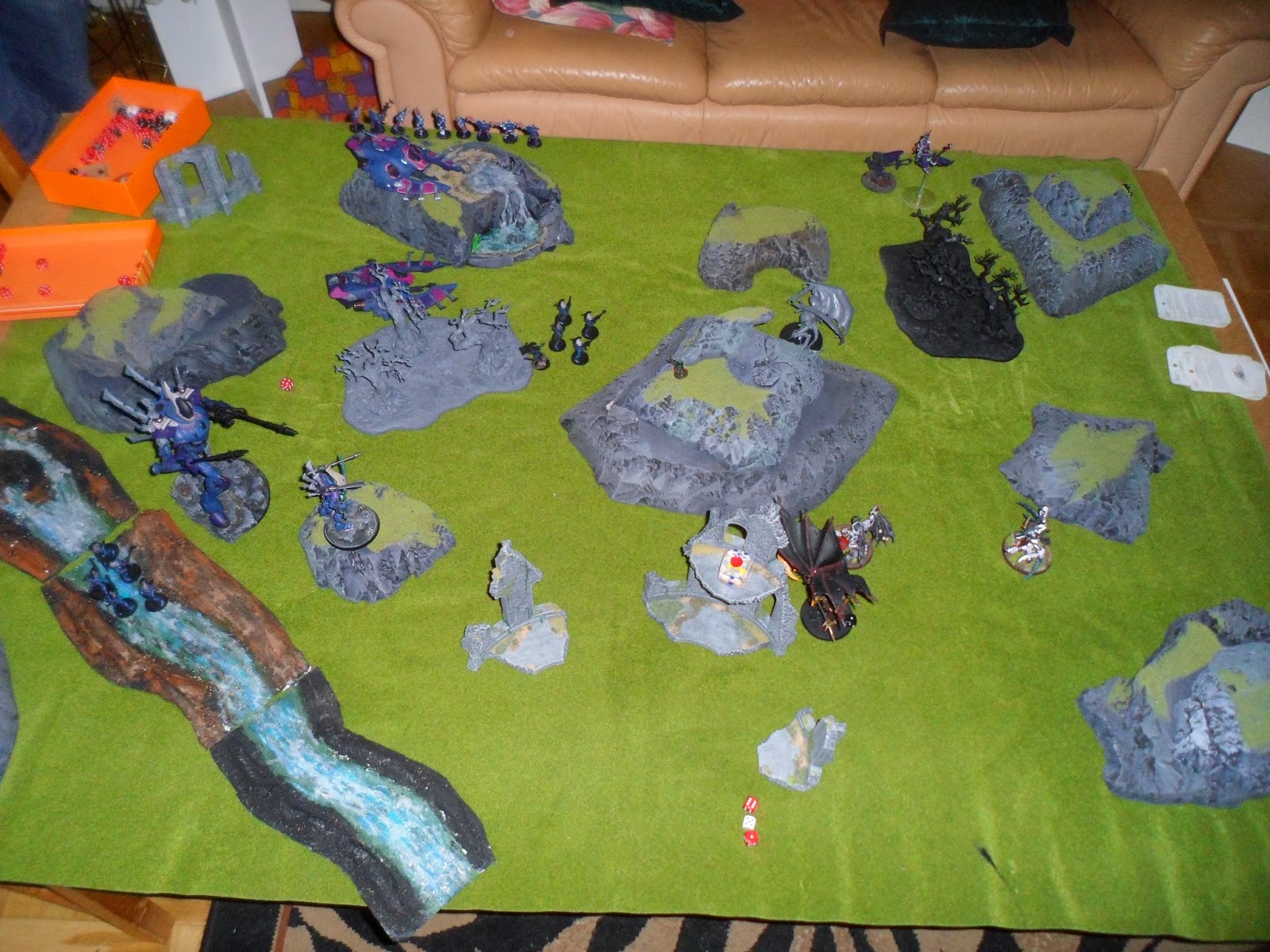 Needless to say, my Prince who flew way too close to his line died turn 1... 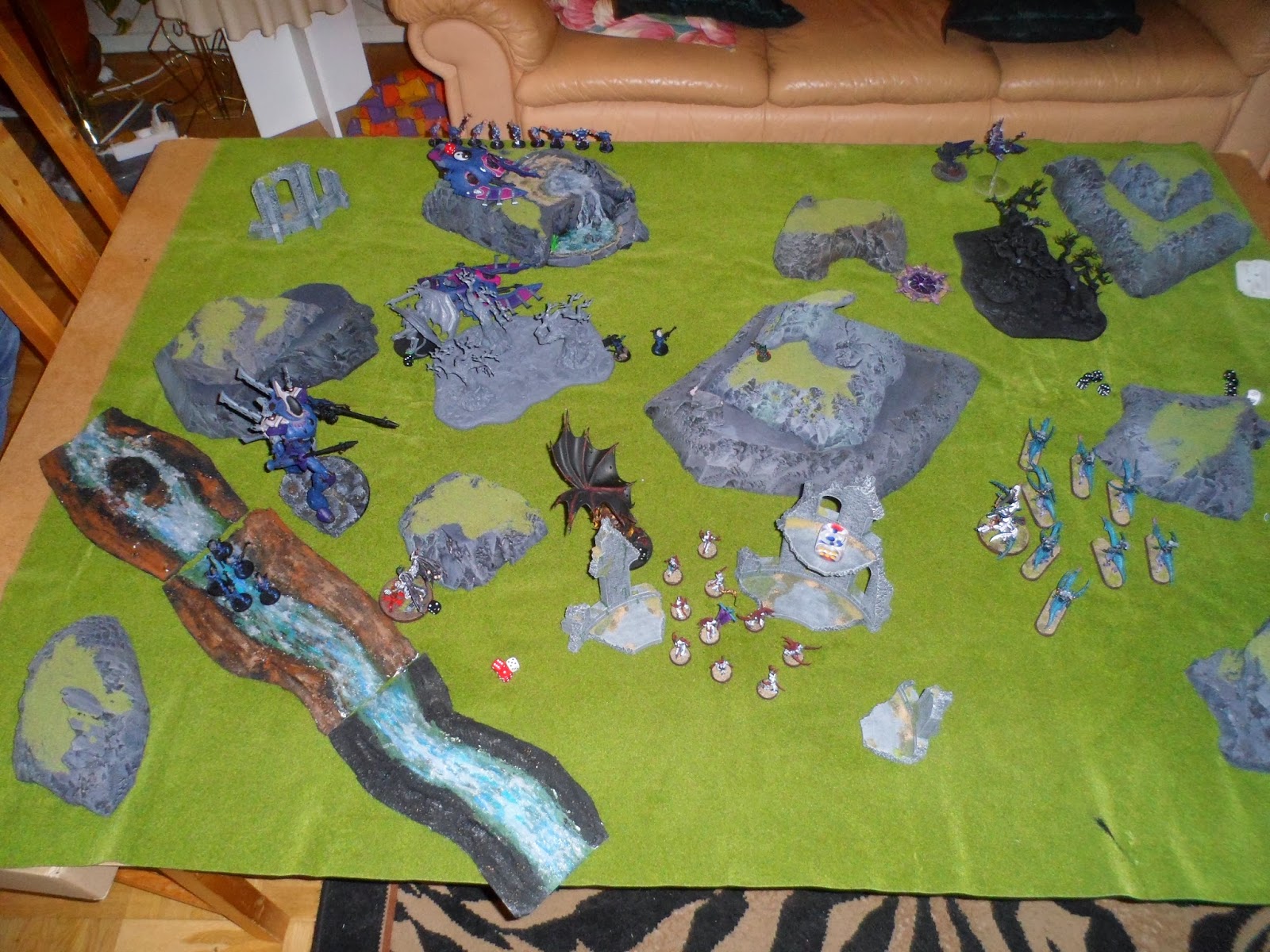 One unit of Daemonettes drop in, and the Seekers arrive. For some reason I decide to try and use them to chase after the two Autarchs. Silly move, they should've gone straight for the Wraithknight. Be'lakor moves up like a boss, Vector Striking some Dire Avengers and also gets the Grimoire treatment for that nice 2++. Puppet Master again, but I fail to wound the Serpents again. 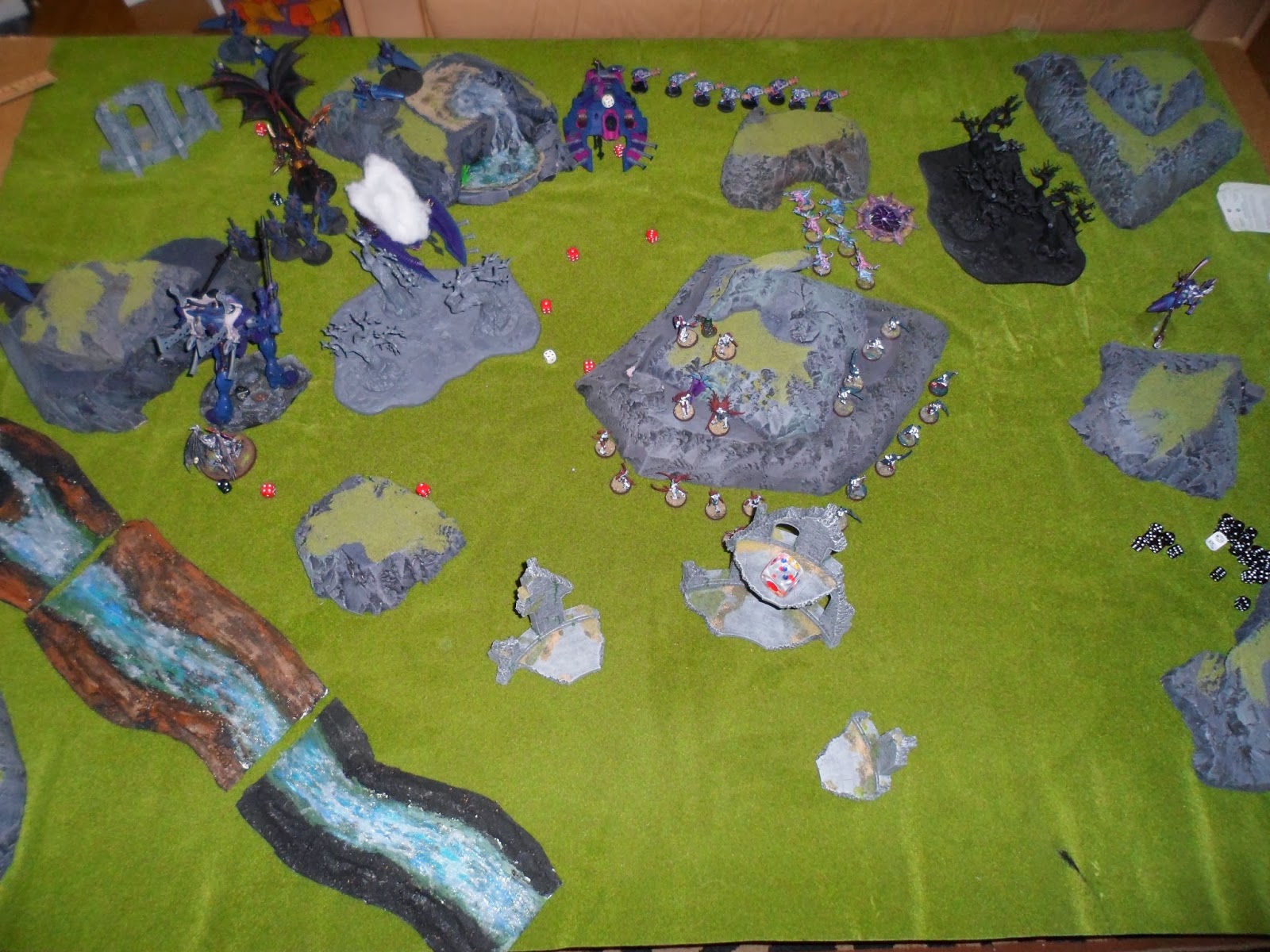 I kind of lost track of pictures here, this is turn 3 I think. What happened in between was the Autarchs charged the Seekers... and wiped them out in one go because of a horrible Instability roll... The Wraithknight instakilled the Keeper (damn those Distortion shots!). I managed to swarm the Relic at least, and eventually Be'lakor charged the Wraithknight and easily killed him. But that was basically my only victory, as my other Princes quickly went down to Wave Serpent Shields grounding them, and then those nasty 6's on D-scythes. With my Princes gone he went on to charge his Mantarch into my Daemonettes, wiping them in one go as well, and Spiders shooting off my other Troops.

So in essence I lost this game with that early mistake pretty much. After that I played catch up, but just couldn't do it. Even with his Jetbikes out for most of the game he completely out shot me. Of course I had to have a re-match!

We switched up the terrain a bit and went at it again. Again Hammer&Anvil deployment, but Emperor's Will this time. 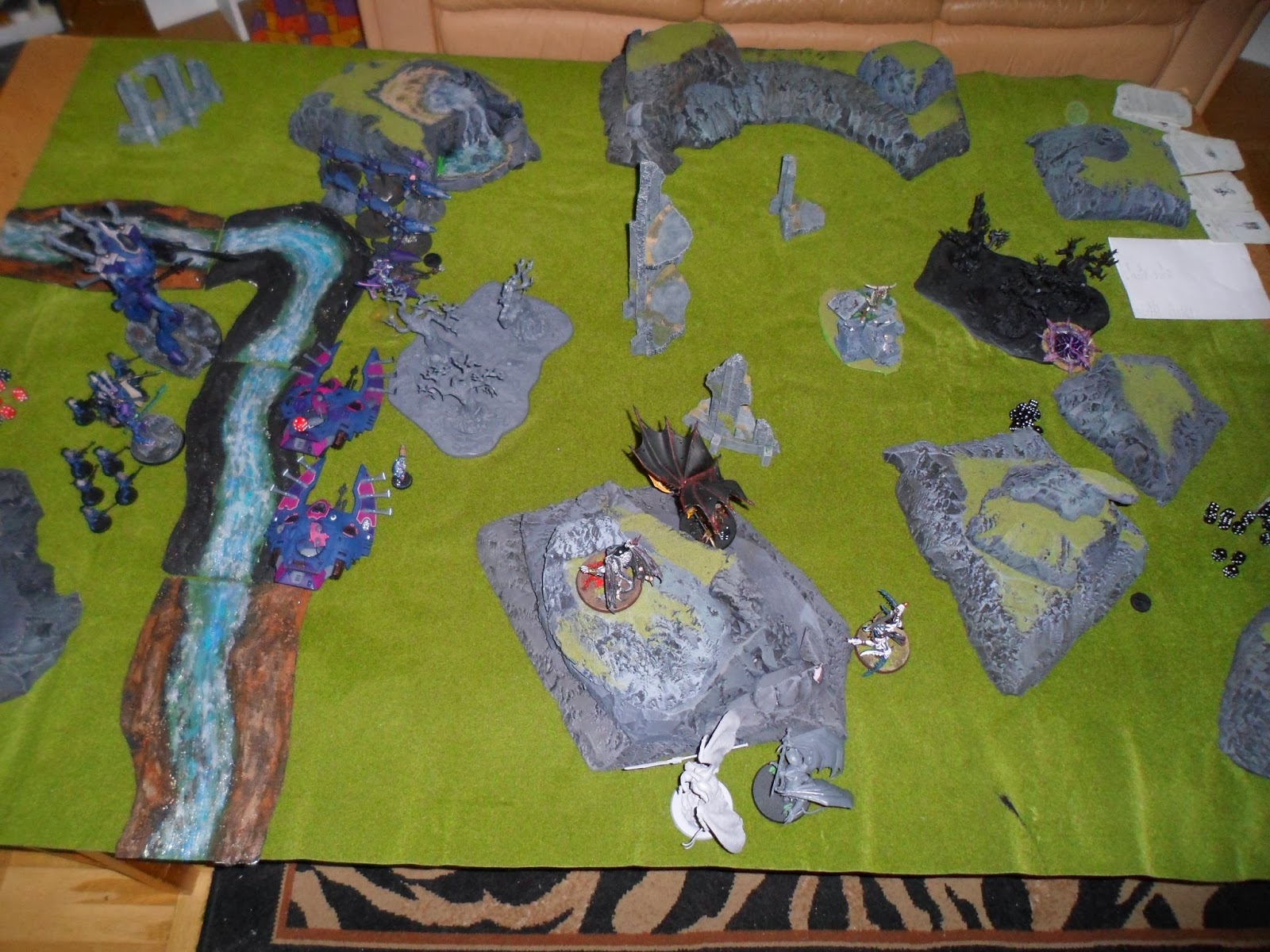 I won first turn again and deployed defensively again. Daemonettes Deep Striking and Seekers outflanking. Turn one I moved up behind the large hill (which is a Line of sight blocker). I put Grimoire on Be'lakor and felt invincible, so I put him on top of the mountain. Perhaps not the smartest move, but pretty baller at least.
He tried to bait me with his Warp Spider by putting them up front to draw me in. It totally worked, except for one thing... I rolled awesome on my lash-shots and killed all but one. Trap disarmed. 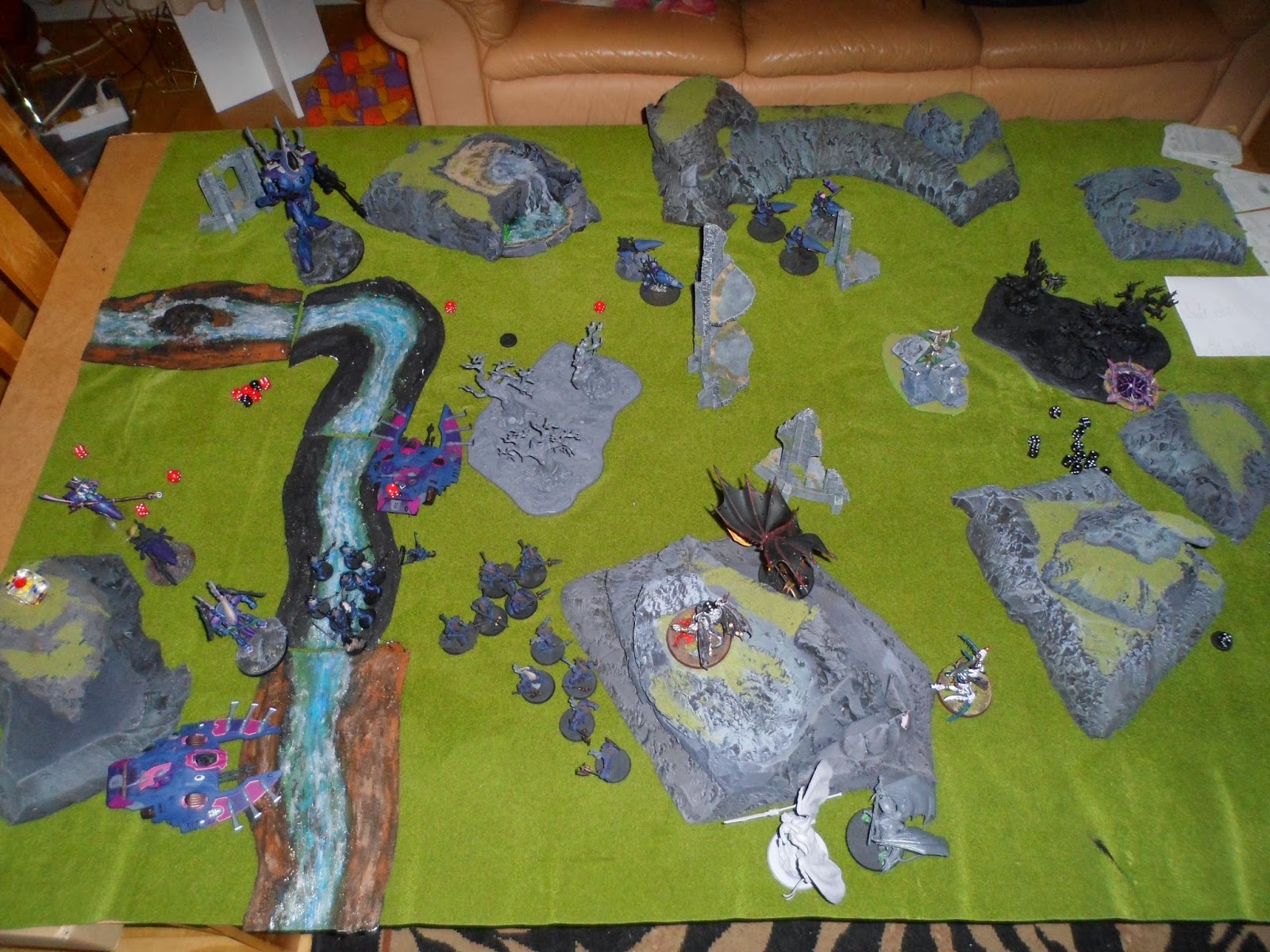 Wraithguard and Wraithblades came out to play, and his entire army shot at Be'lakor. He brought him down to a single wound left, but he took it like a boss. Bold move passed.

My turn 2 came up, and I rolled a 3 on the Warp Storm table... randomised the target (I had six Characters on the table so wasn't worried at all!). And of course it hits Be'lakor. What! I rolled my three dice, knowing I only had to roll 11 to lose my Warlord and First Blood... and rolled: 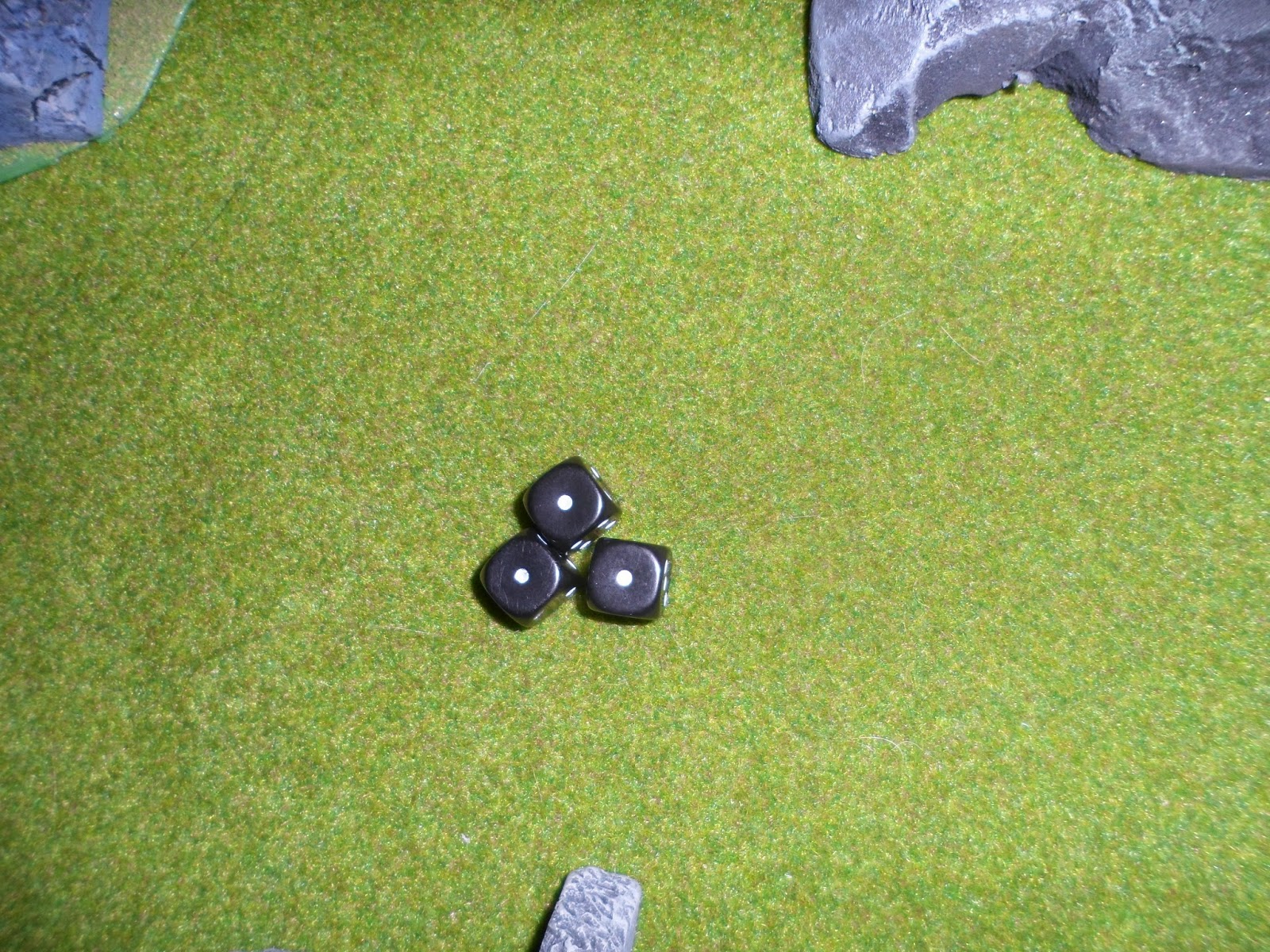 Aw yeah. No Chaos Gods will mess with Be'lakor! 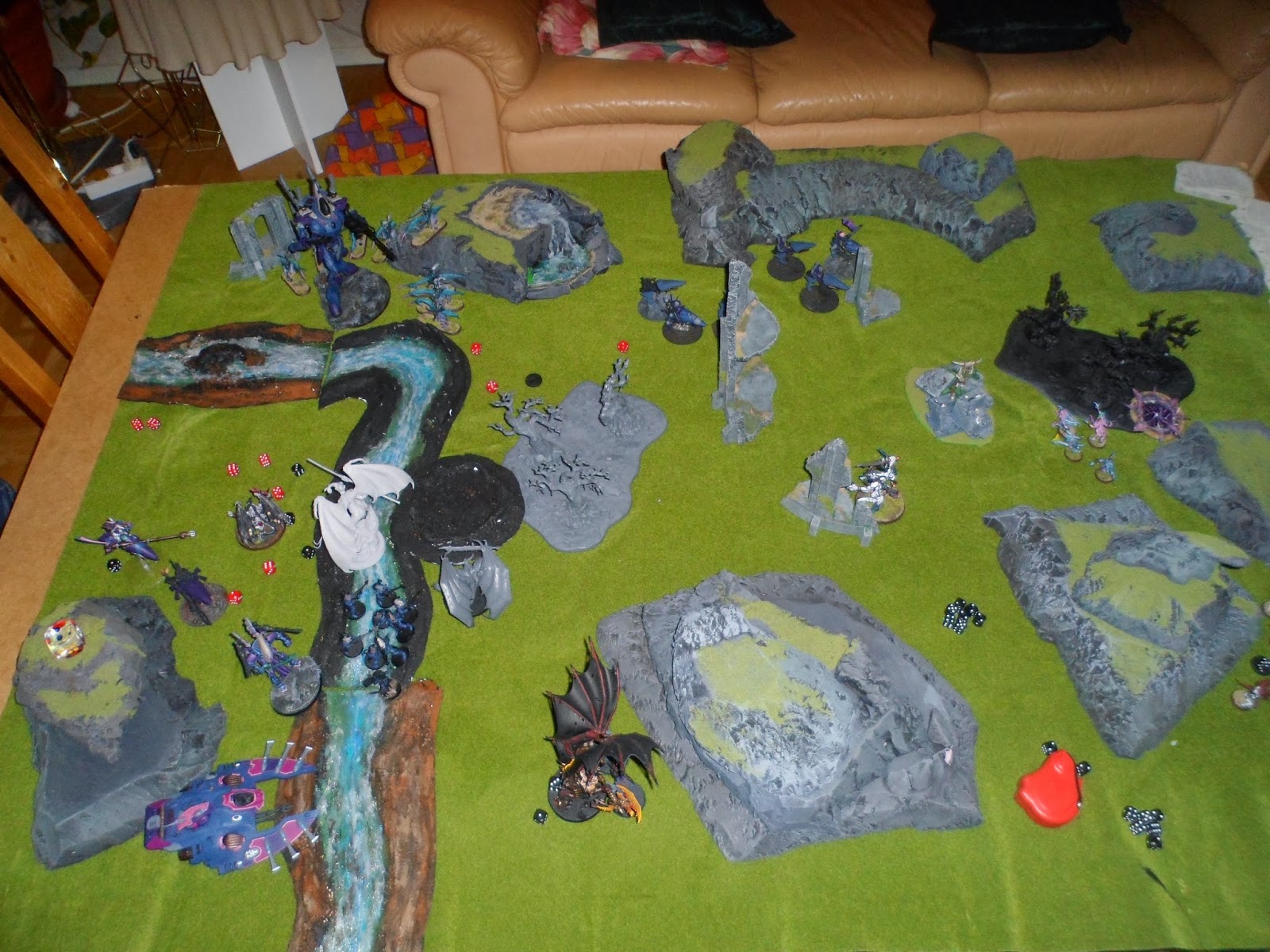 Massive fly-by of Vector-striking Daemon Princes pretty much wiped out the Wraith-units. The last one was charged and quickly killed in assault.
Seekers also came in, and this time there was nothing to distract me from the Wraithknight as he had even deployed close to a board edge. I tried to surround him to be able to auto-charge next turn. 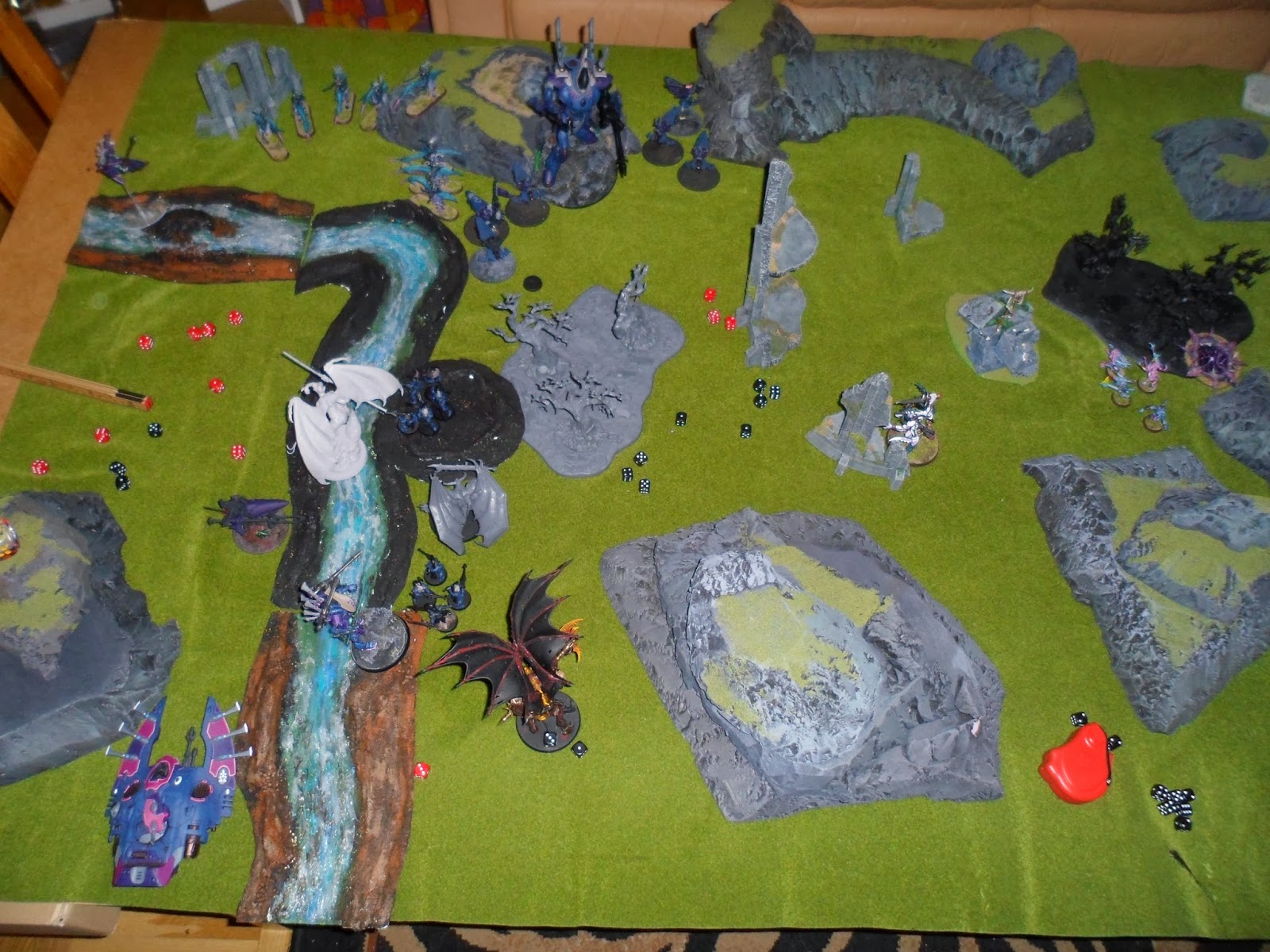 Be'lakor finally went down in the Eldar turn, but he had done his job really well all ready so that was okay. He tried to escape with the Wraithknight and wither down the Seekers. Didn't help much. 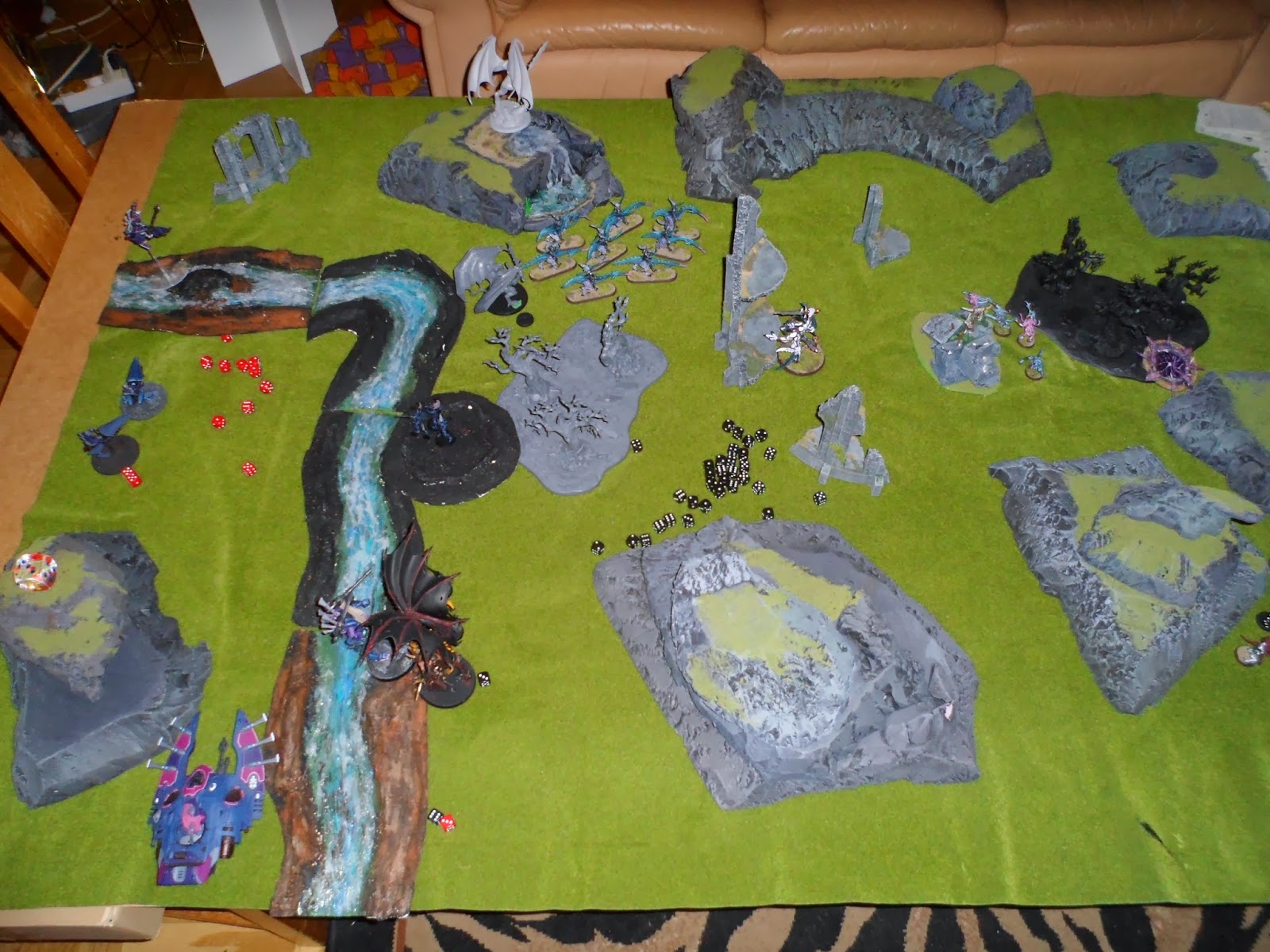 Seekers finished off the Wraithknight, Daemon Princes went after his Troops and the Wraithlord. Not much left of his Troops at this point... 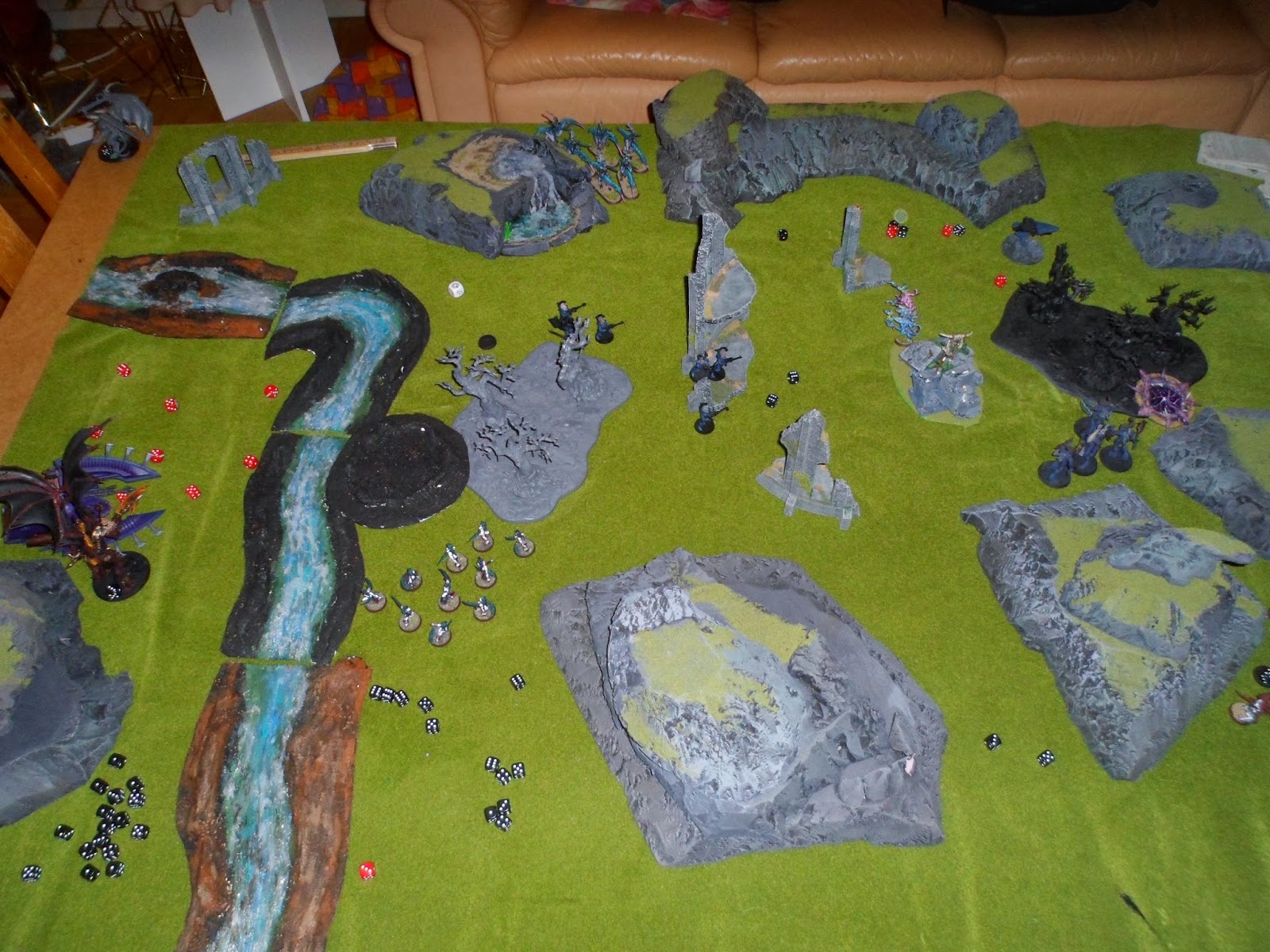 And this was the end. Those Wraithblades are actually Daemons who spawned from the Portalglyph (couldn't be bothered to go fetch more Troops). So basically 4 Dire Avengers survived, one Daemon Prince would come back the turn after. We called it there.

What I learned was how damn awesome Be'lakor is. He's a real boss, not that I ever doubted. Pretty expensive, but so worth every single point. Flying Circus was also quite interesting to play, as it's really fragile sometimes but oh so powerful when it's go-time. Good games!
Posted by Fagerlund at 2/14/2014 07:09:00 PM