Long time no bat rep... well, I've been lazy and busy but I've had time to play some! Unfortunately these games are 1-2 months old so I can't really remember the details... Instead I'm going to let the pitctures paint the story!

This first one is a 1500 point game, my first one against the new Iron Hands, and my first game using the Black Legion supplement. I went for Chosen in Rhinos, a couple of bikes, a couple of Obliterators, the Sorcerer with the Nova-power, a Lord and a Maulerfiend. The idea was to rush him basically.

He had lots of Tacticals (one melta squad in a Rhino), a squad of Assault Marines Deep Striking, Devastators and Centurions, a Storm Talon and the Eternal Shield Commander.

Hammer and Anvil, Emperor's Will. 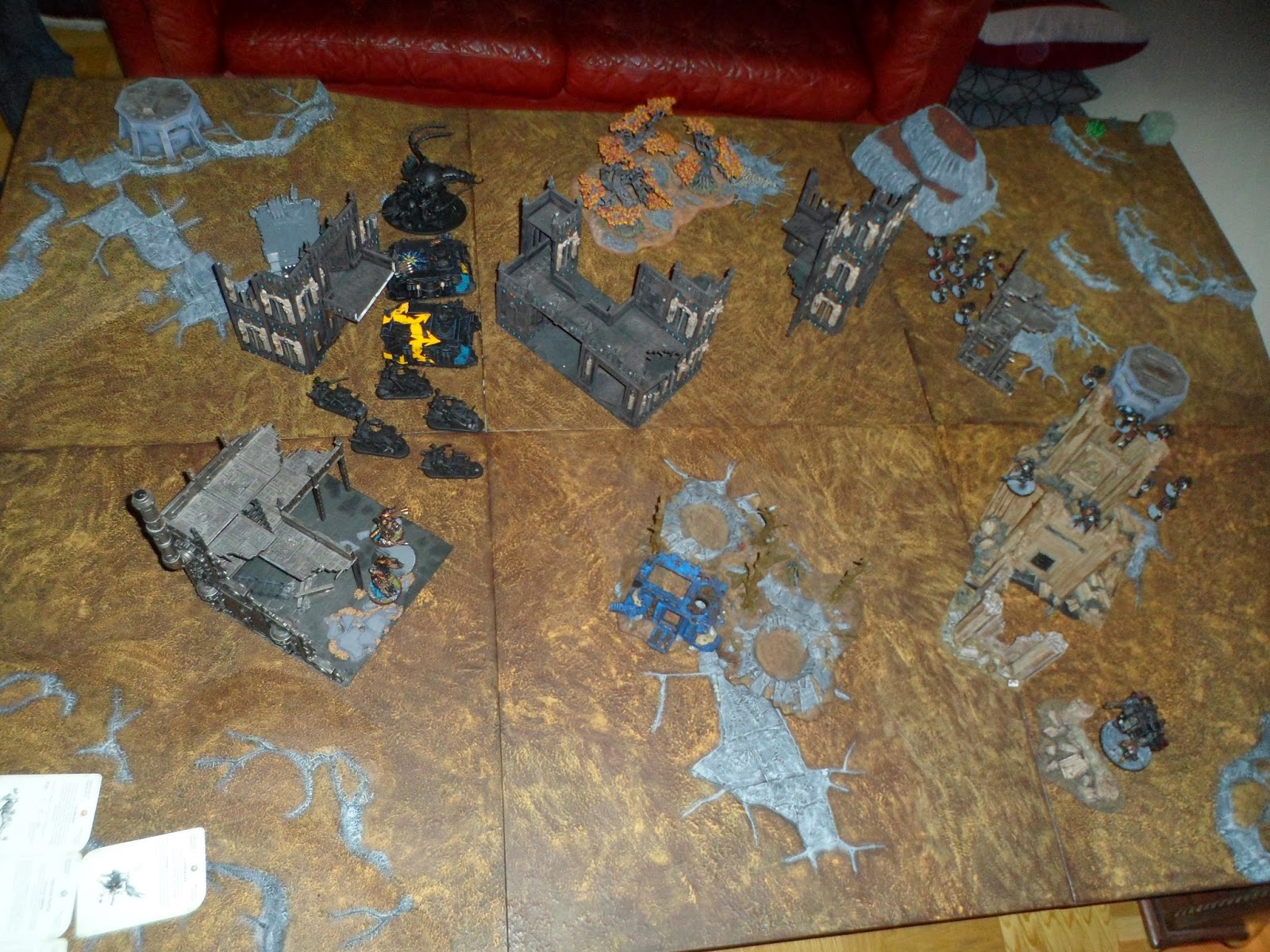 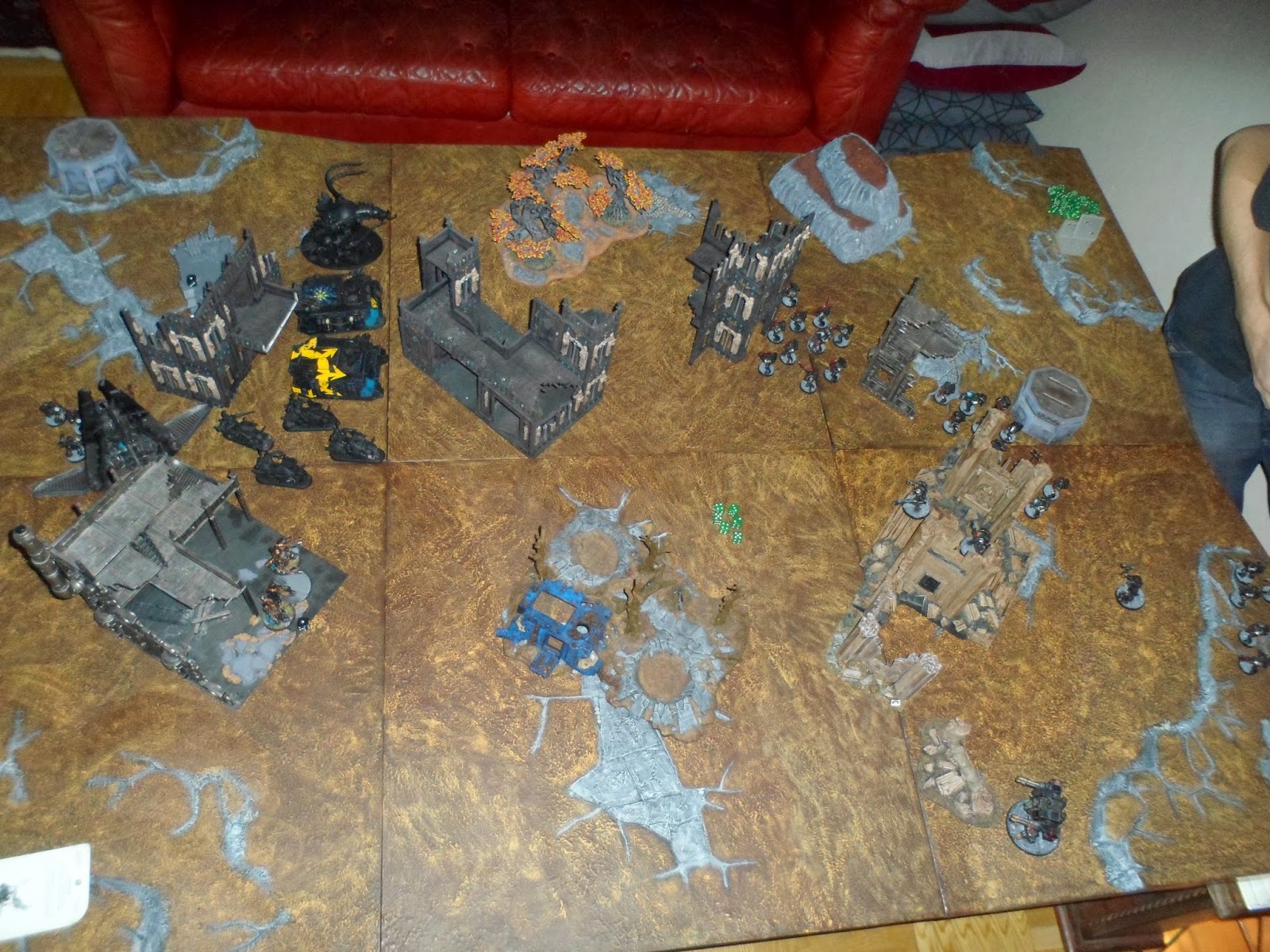 The Drop Pod Melta came in turn one and totally whiffed everything. 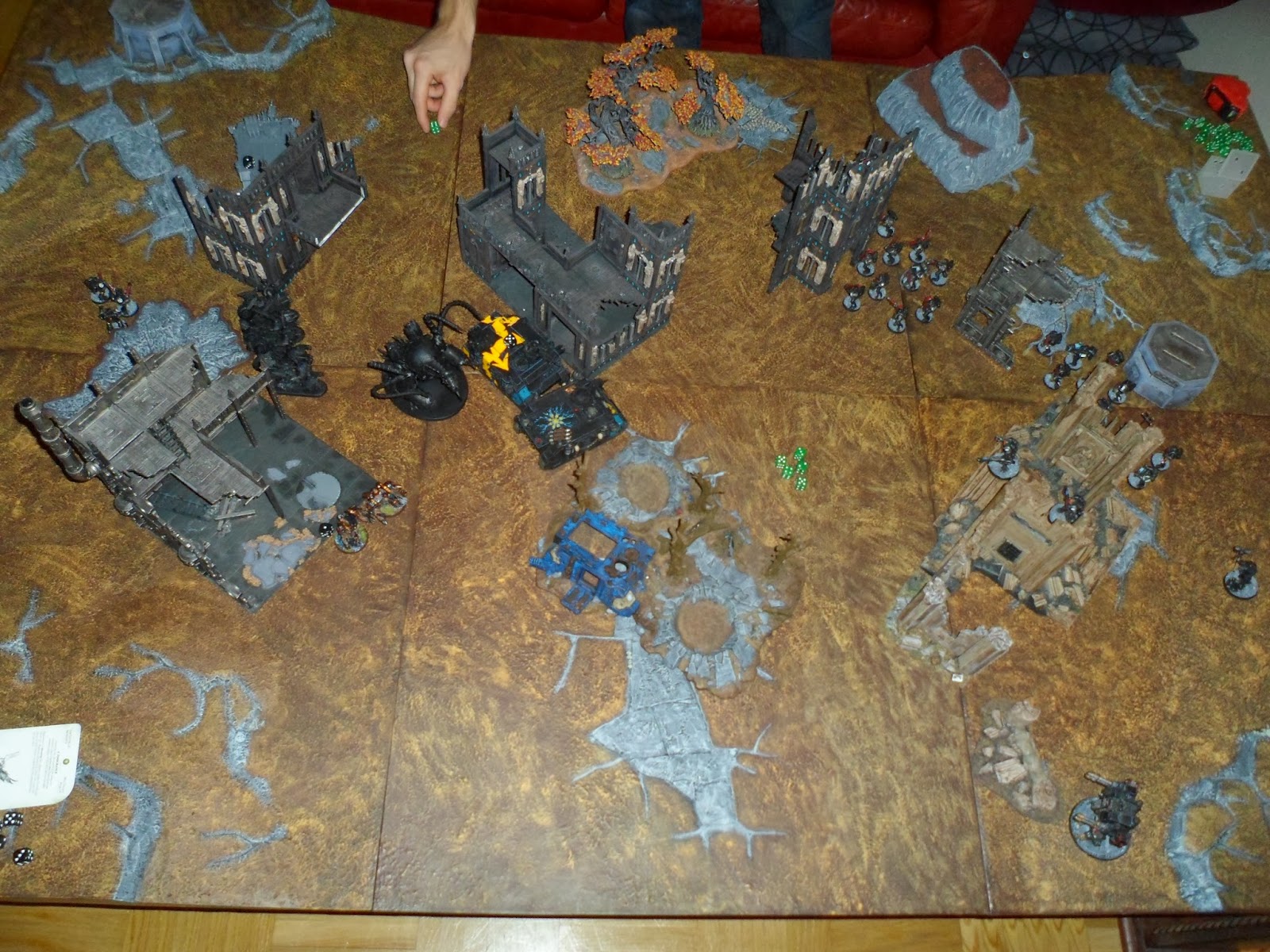 My Bikes turned around and got First Blood from the Pod. Killed the Melta Gun in the Explosion... The next turn the surviving Marines walk up right next to the Rhino... and all four of these super humans with their years of training completely fails to hit the rear armour of the Rhino. To add salt to injury three out of the four die to the four overwatch shots when they charge in... 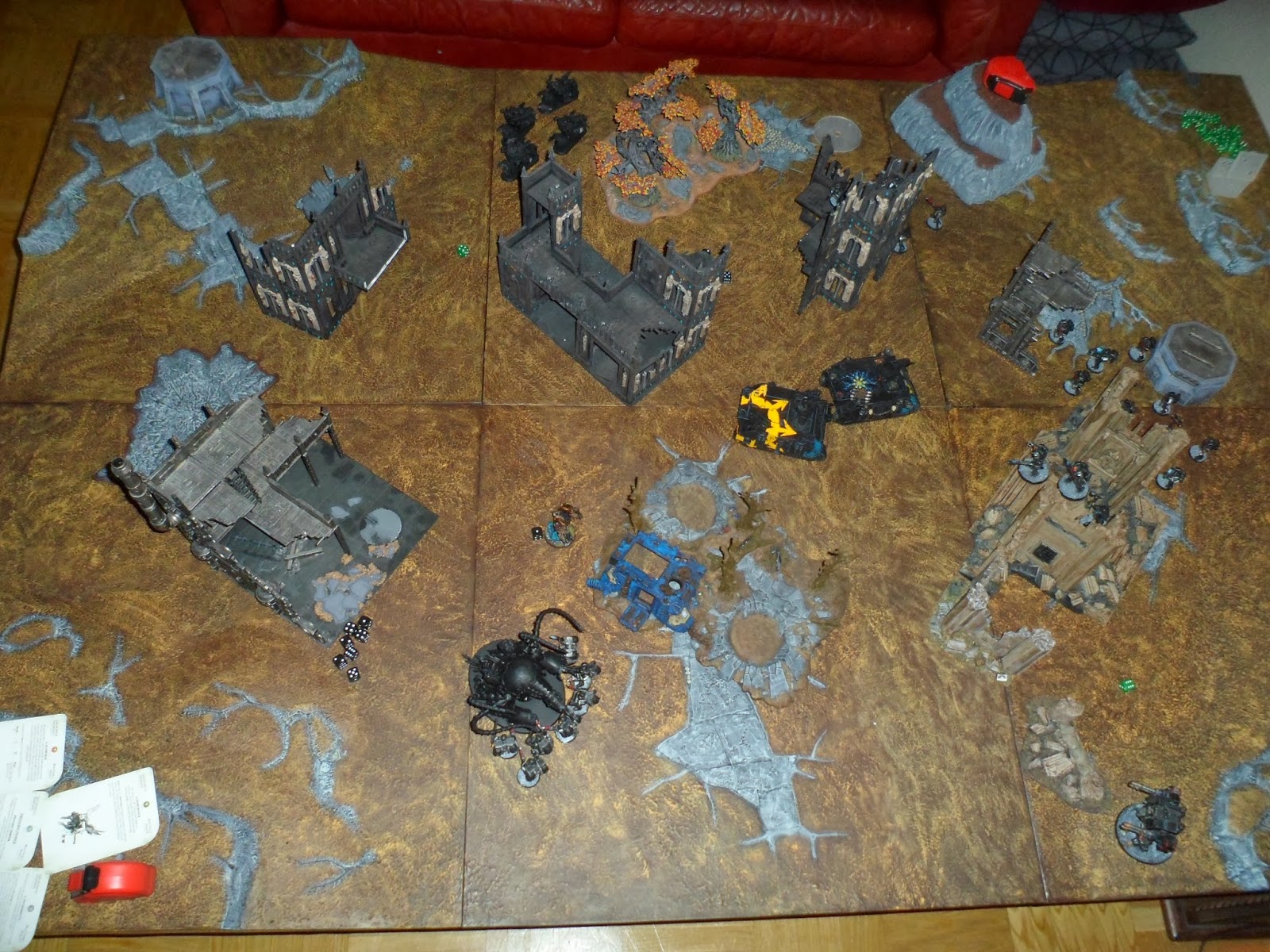 Assault Marines came in and got assaulted by the Maulerfiend. They stand there forever. The Nova power hit every single of his squads, but he passes all blind tests and just loose a model here and there. 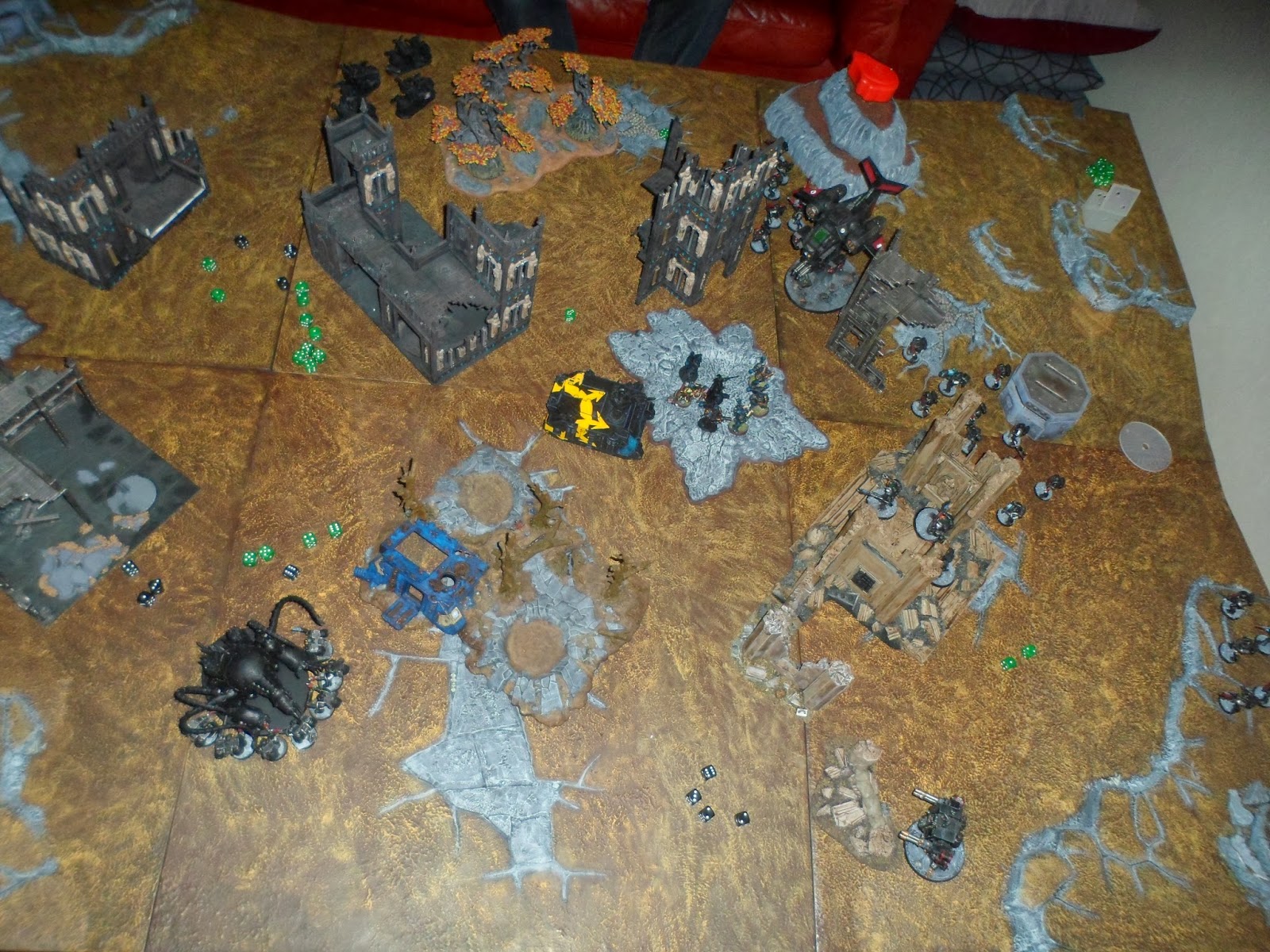 Centurions and Storm Talon does work on Rhinos. 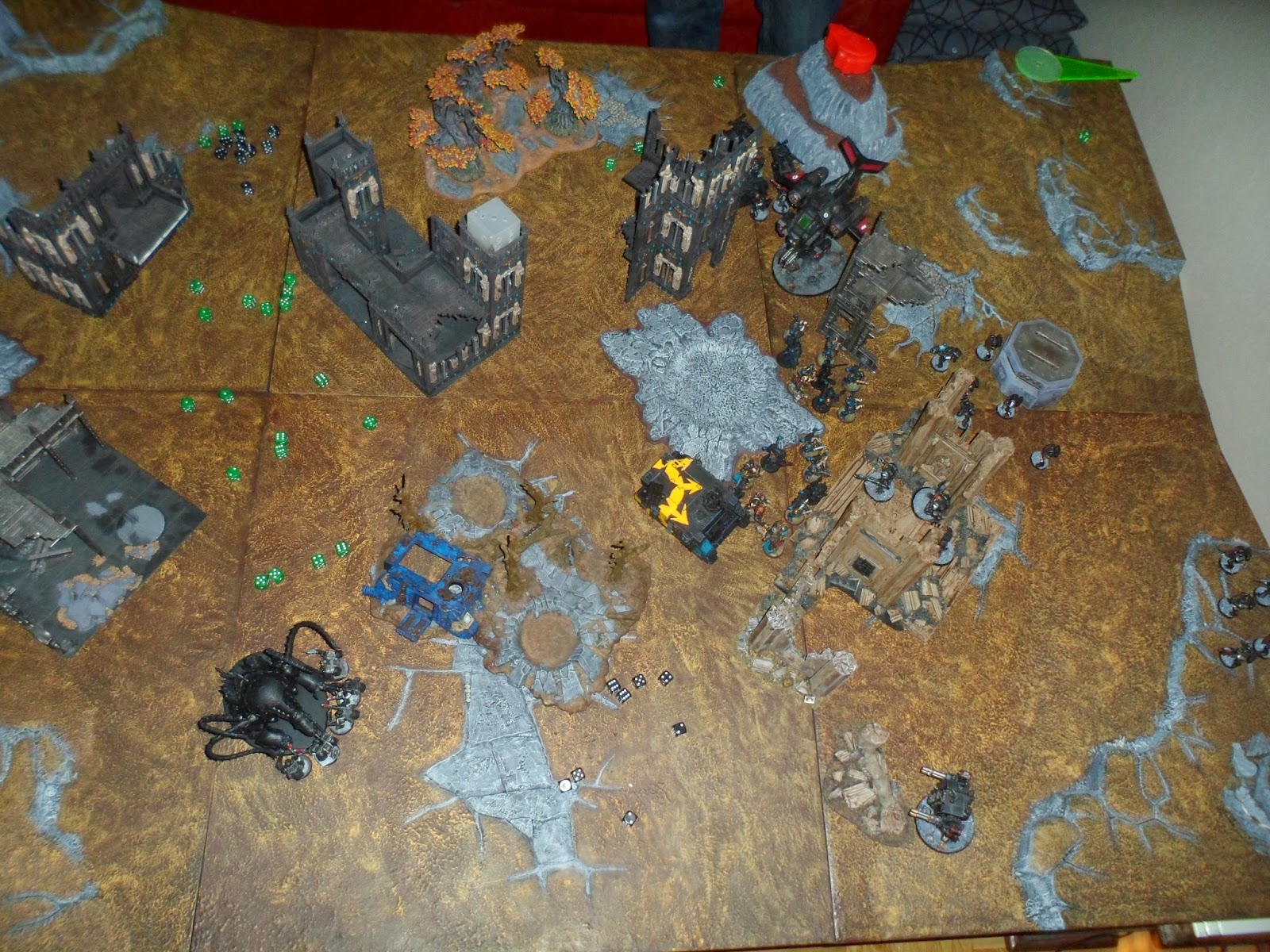 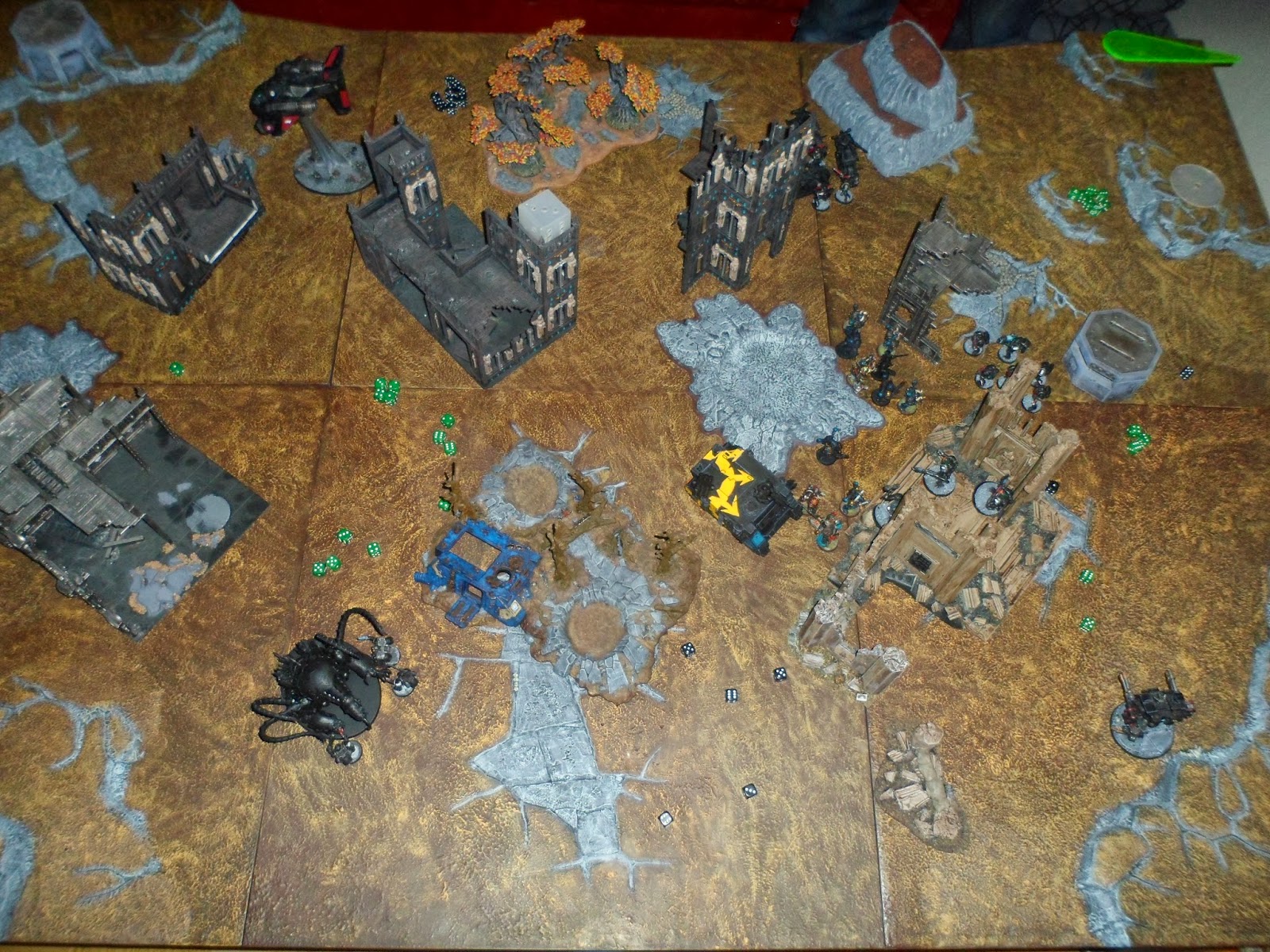 If you can't tell, my Chosen are simply barging through his stuff. Except for the Centurions and the Shield-Commander (who regained two wounds and splashed my Warlord). 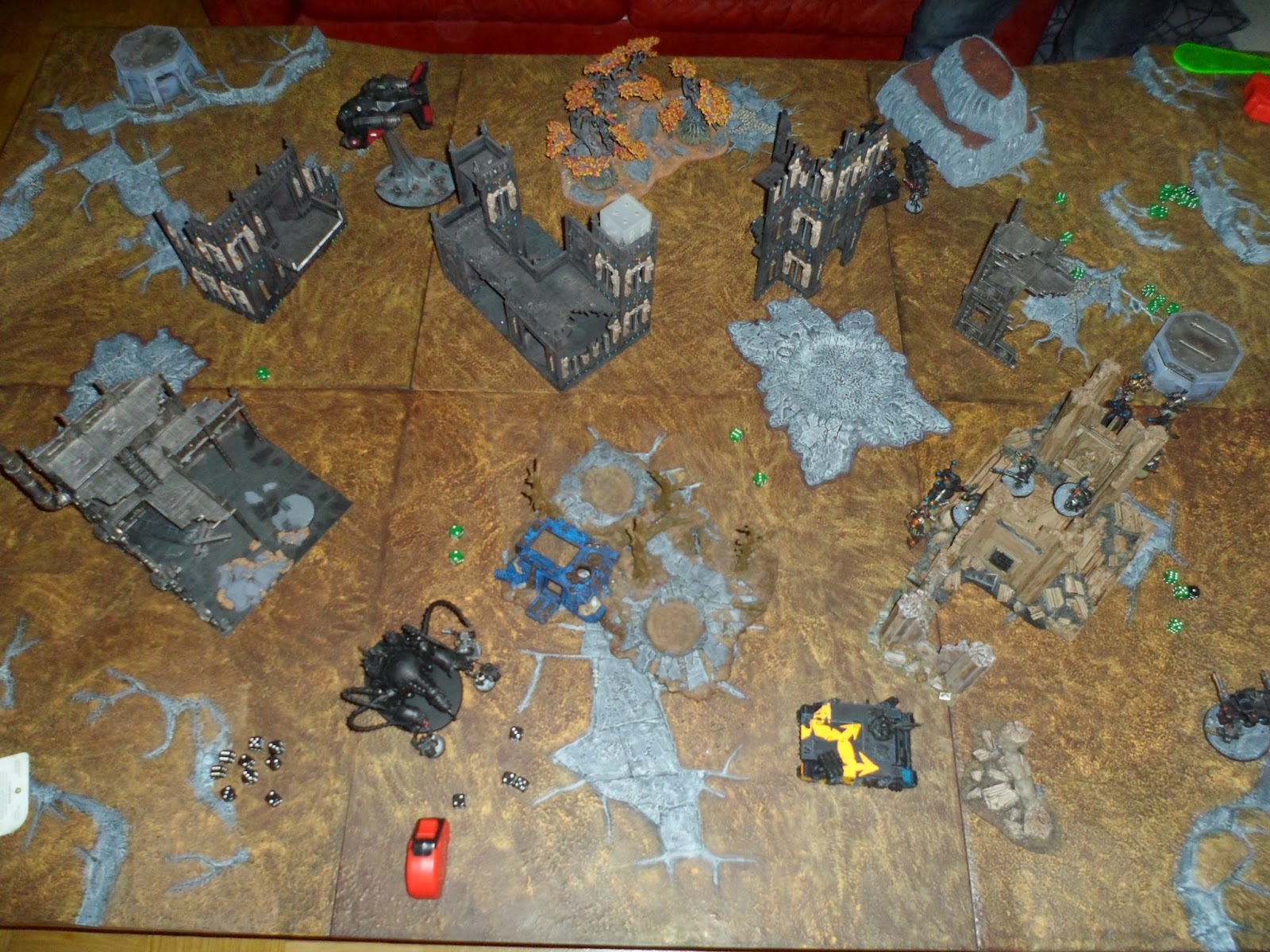 Unfortunately I took no more pictures of this... so you don't get to see the glory that happened with the Maulerfiend. But after the slapfight with the Assault Marines all game the last three finally fled and were not caught. This free'd up the Maulerfiend to run to the other side and make a 11" charge at the now hovering Storm Talon that was withering down my Marines sitting on a Objective. It was exploded. The turn after the Maulerfiend run right back across the board once again and stops the regrouped Assault Marines from taking Line Breaker. Meaning I win the game since I contest his Objective, hold my own and have First Blood. What a hero!

So, let me throw in another game here, just because. This time I wanted to try out my Tau (who are shamefully very unpainted)... I had to ally in some Eldar to get the points up to a good size though. Basically I went with Farsight Enclaves, having a Fire Cadre, 12 Fire Warriors, 3 Stealth Suits, 3 Crisis Suits with Plasma&Fusion, two squads of Pathfinders with both kinds of special weapons, 1 Broadside, 1 Piranha and allied in 10 Guardians in a Wave Serpent with Illic and some Pathfinders.

I faced off against a Land Raider with a Chaplain in Terminator armour and Assault Terminators, Razorbacks, Centurions and a bunch of Tacticals as well as some Assault Marines.

Vanguard Strike and Emperor's Will once again. I got to chose side so I deployed a gunline in the ruins and told him to come at me. Which he gladly did with Assault Marines and Land Raider. 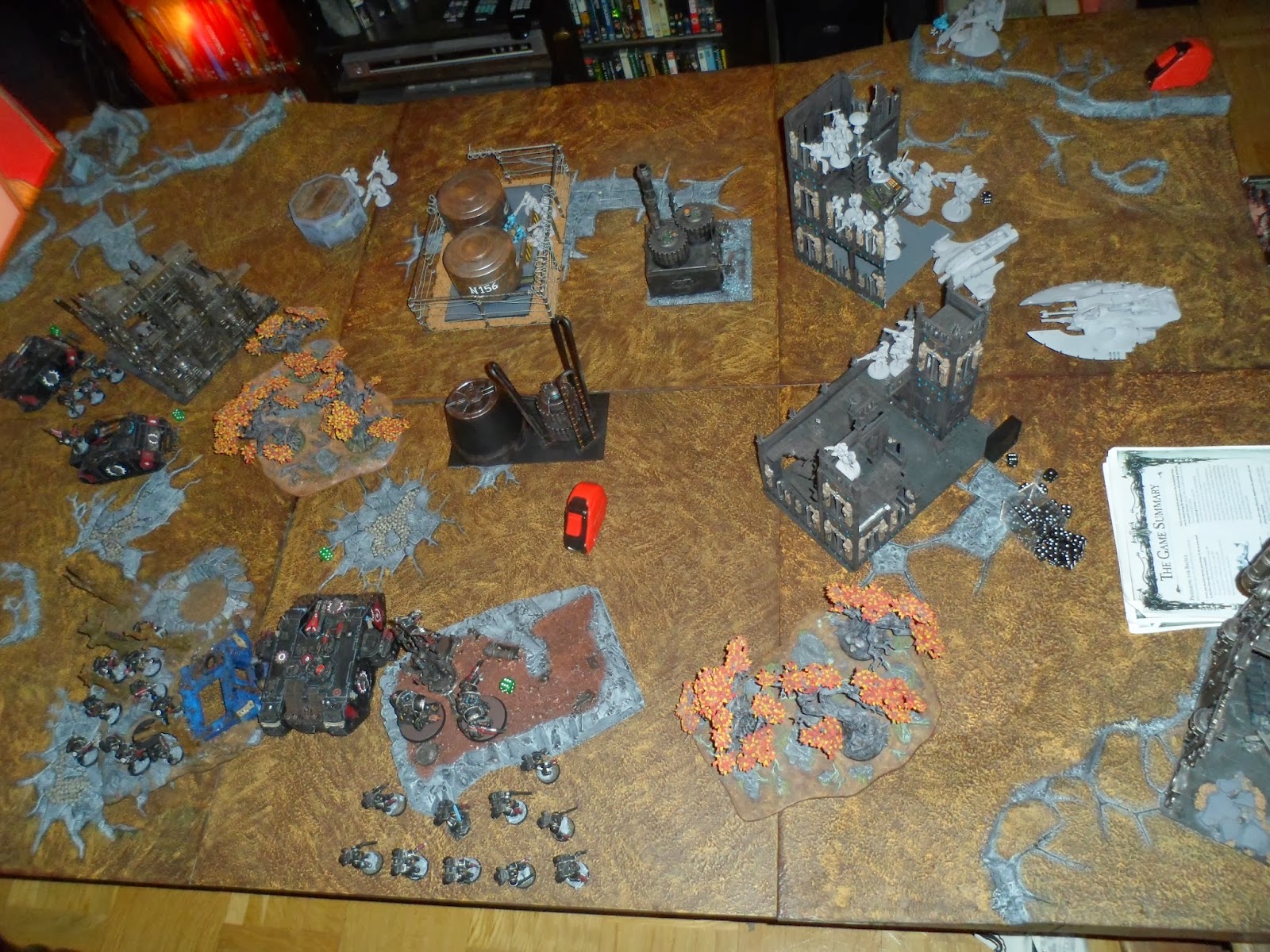 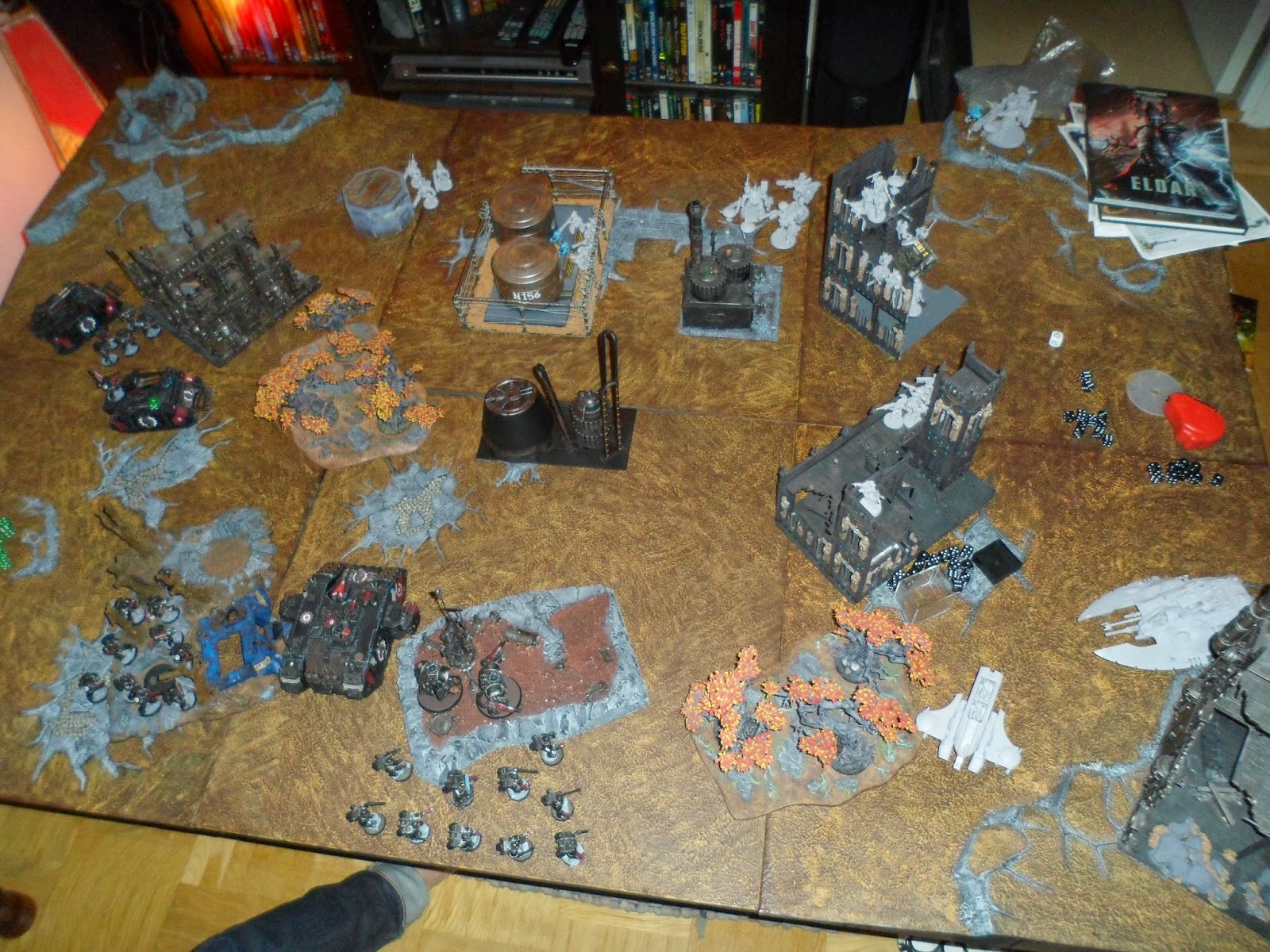 I totally miss-placed Illic. I forgot those Assault Marines had Flamers... and Flamers are nasty for a 5+ armour dude relying on Shrouded... he died turn 1 and gave up First Blood. Bah. 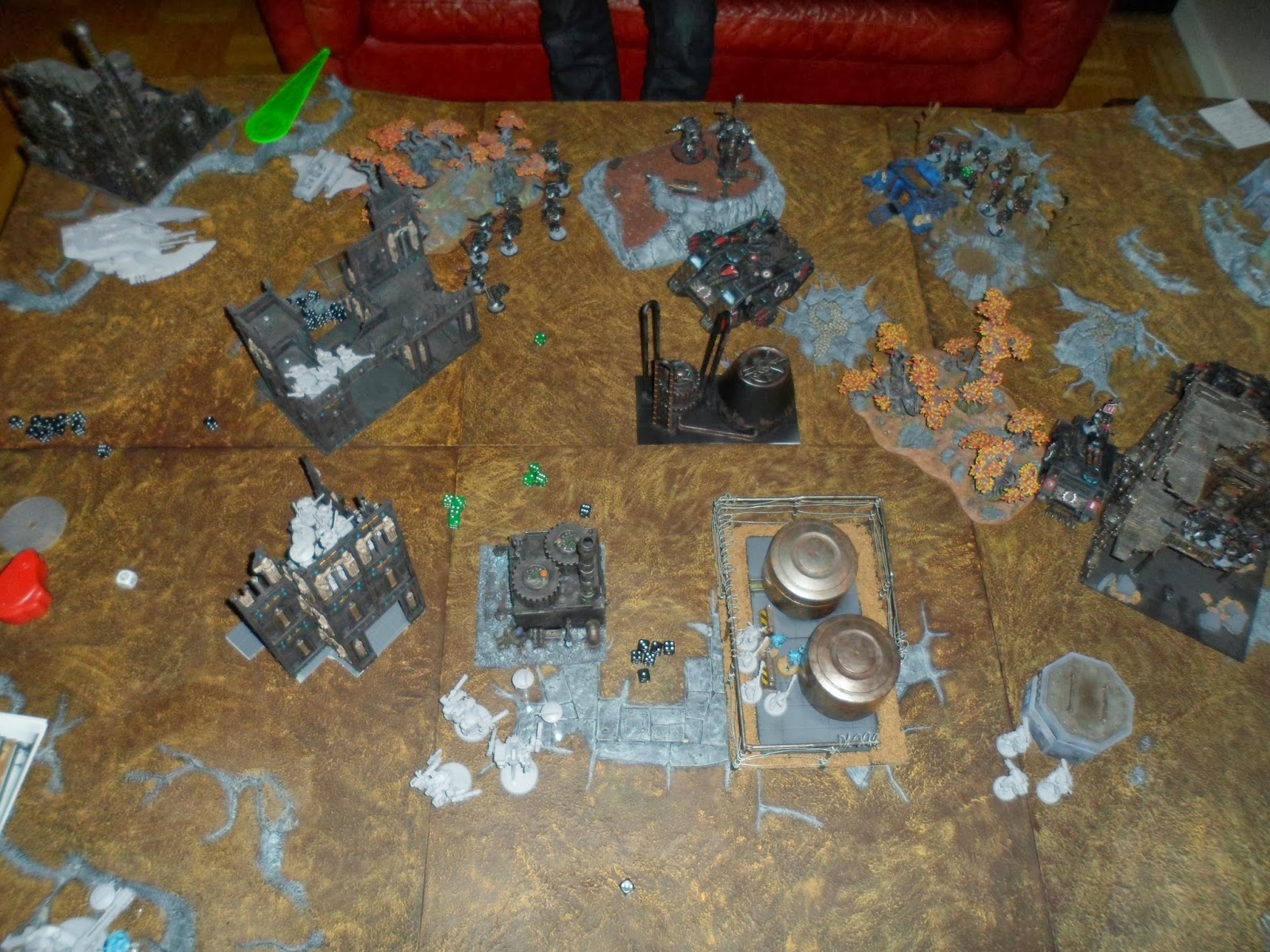 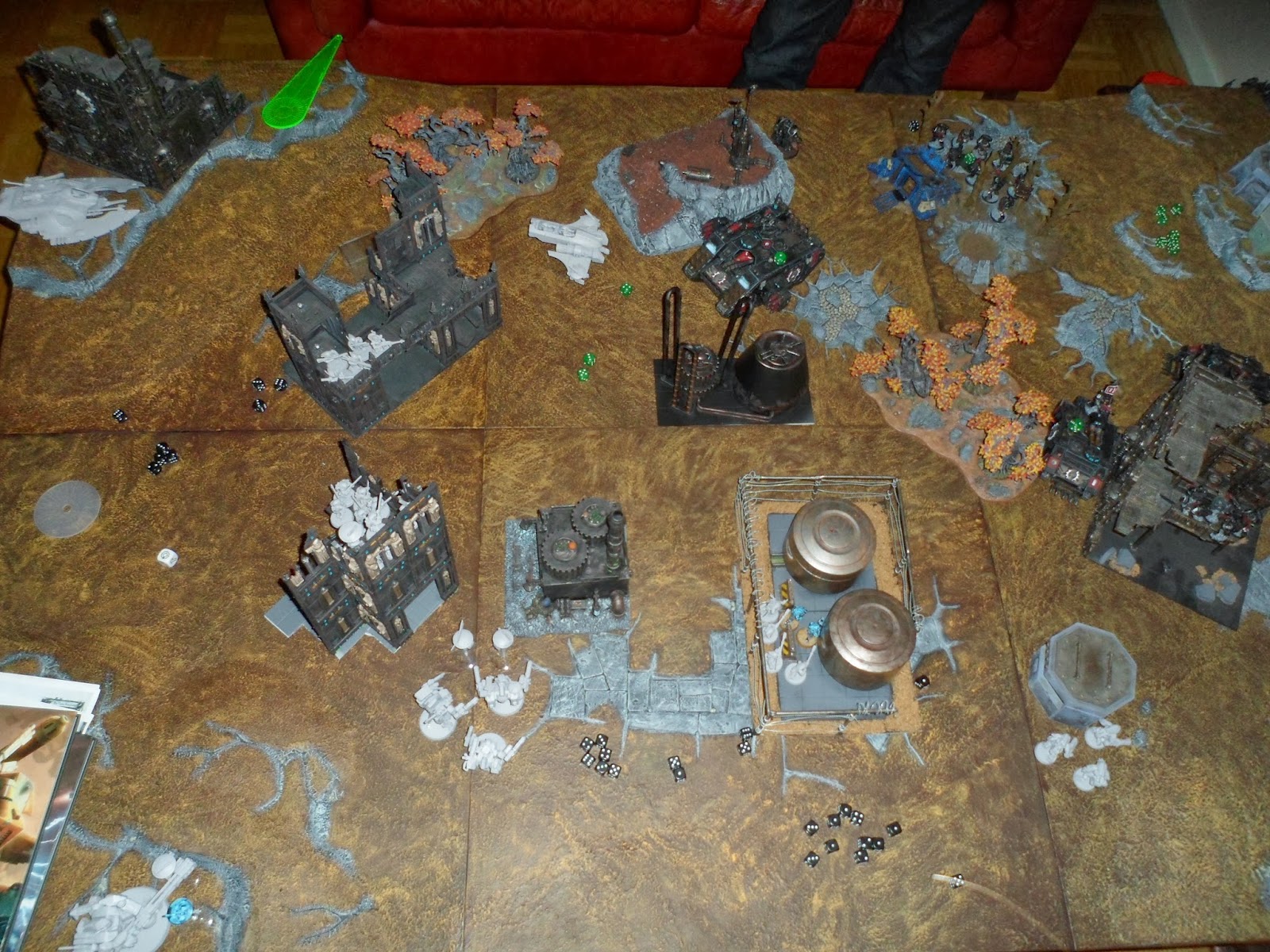 From my last game against the Iron Hands I learned that the Centurions put out a lot of fire power. So they got the pleasure of eating a lot of shots until only one remained (on the hill) at which point he wasn't very effective any more. 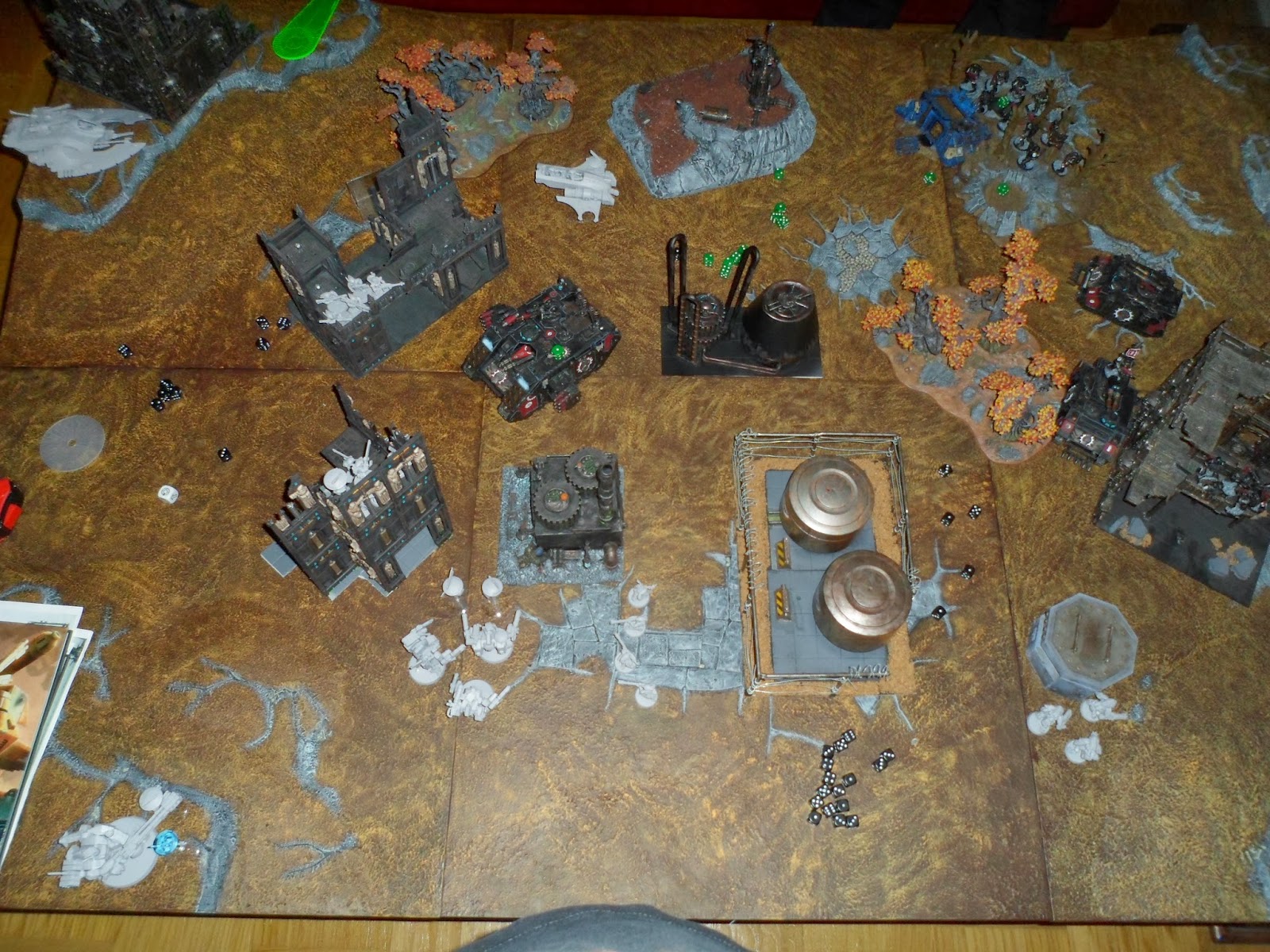 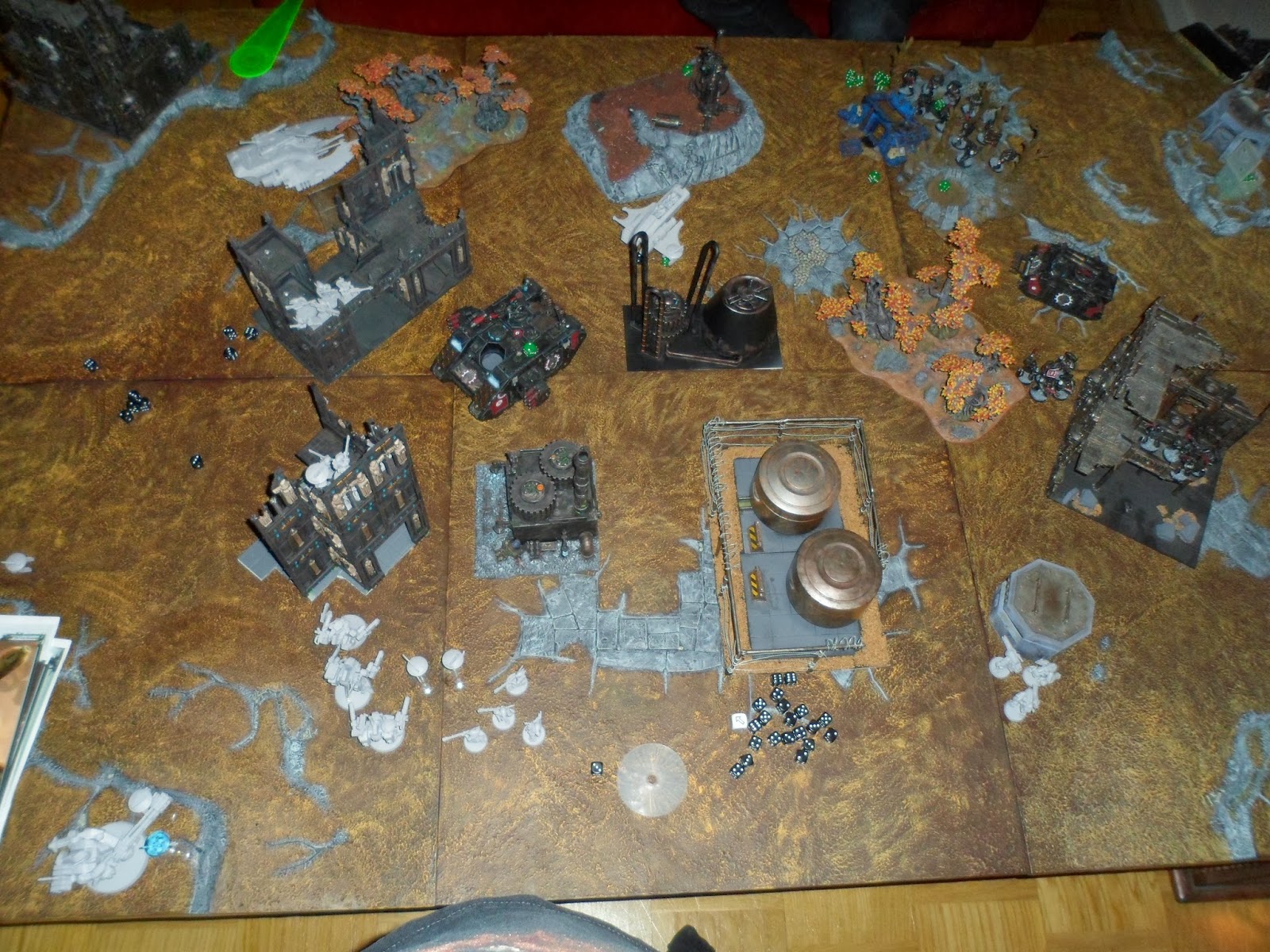 At this point I had shot about 8 Fusion Guns at the Land Raider, which was within half range. It refused to die, and it regenerated 4 Hull Points. Bah! 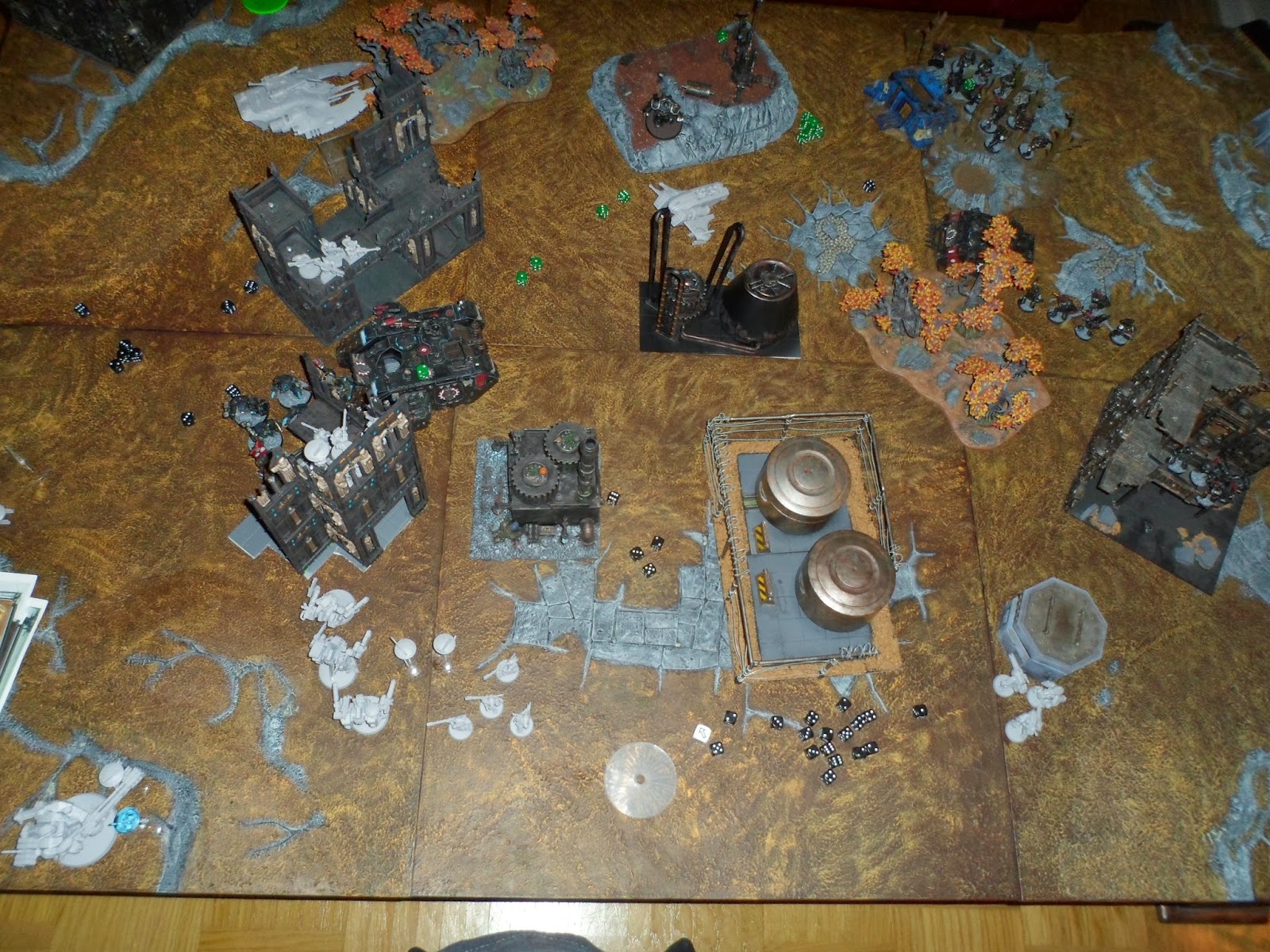 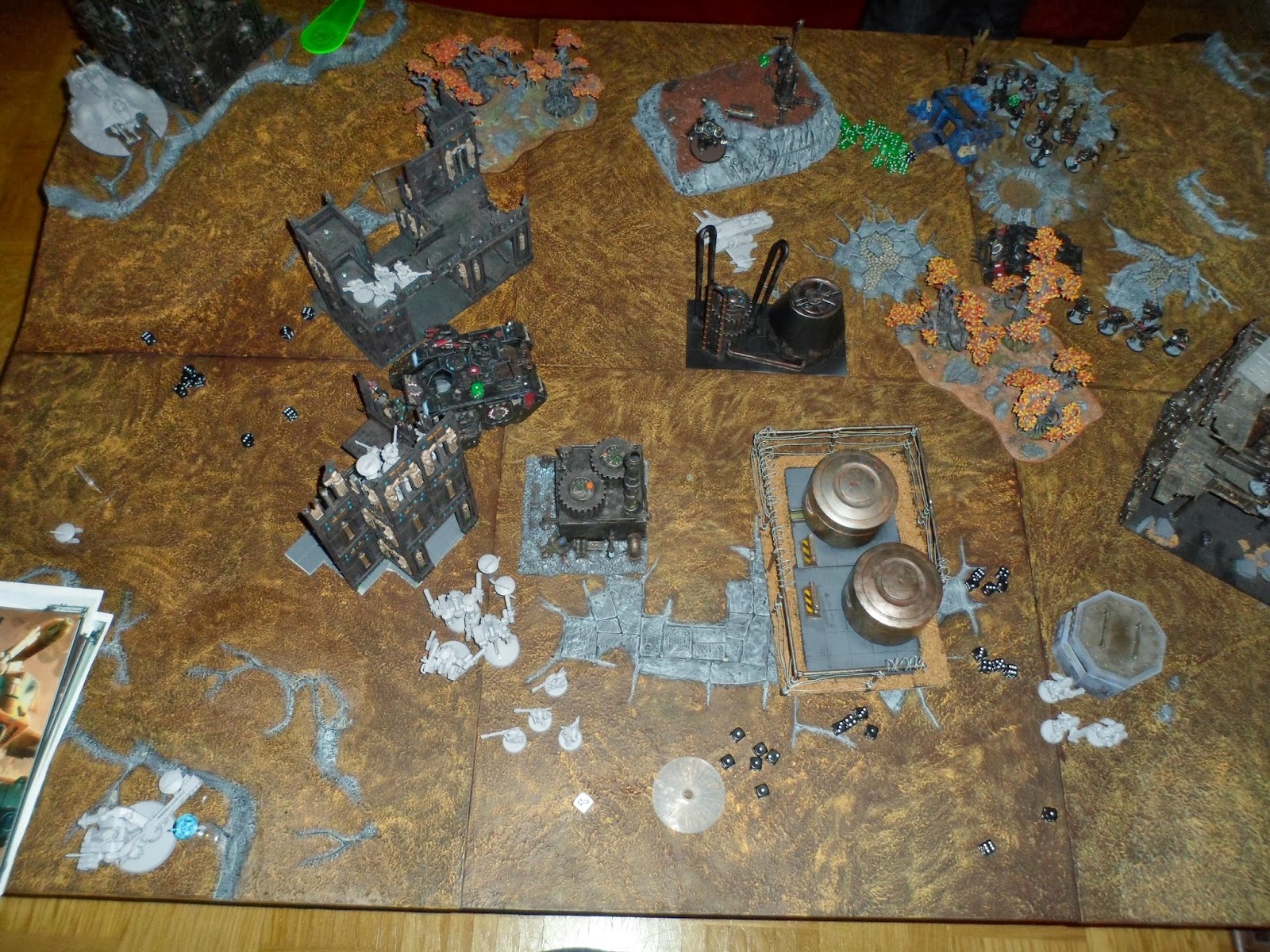 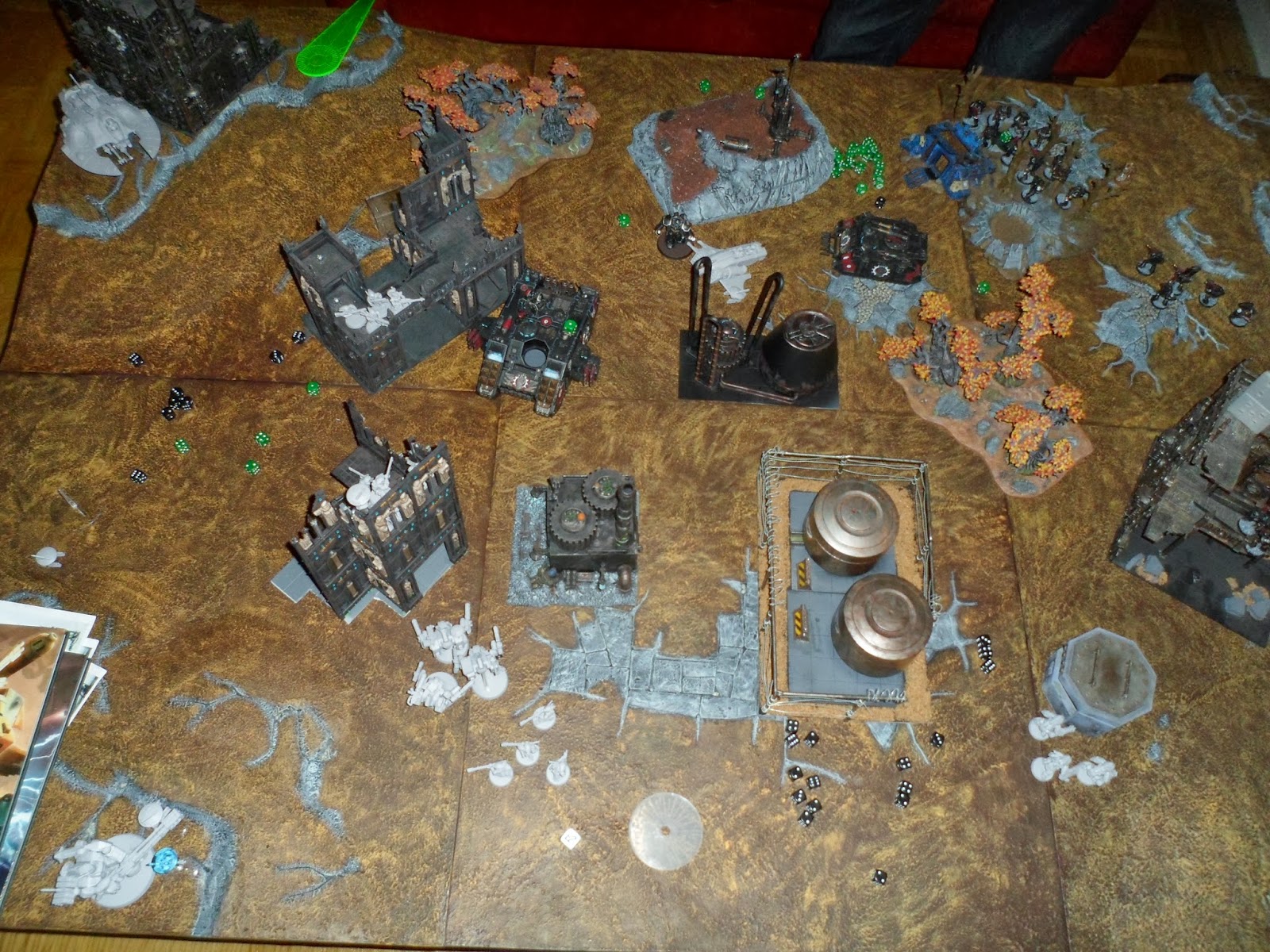 Pathfinders Outflanked on the right hand side. You never see them... as it should be. They picked at the Marines in the forest holding the Objective, didn't do much. They also refused to die for quite some time, keeping the Marines distracted. 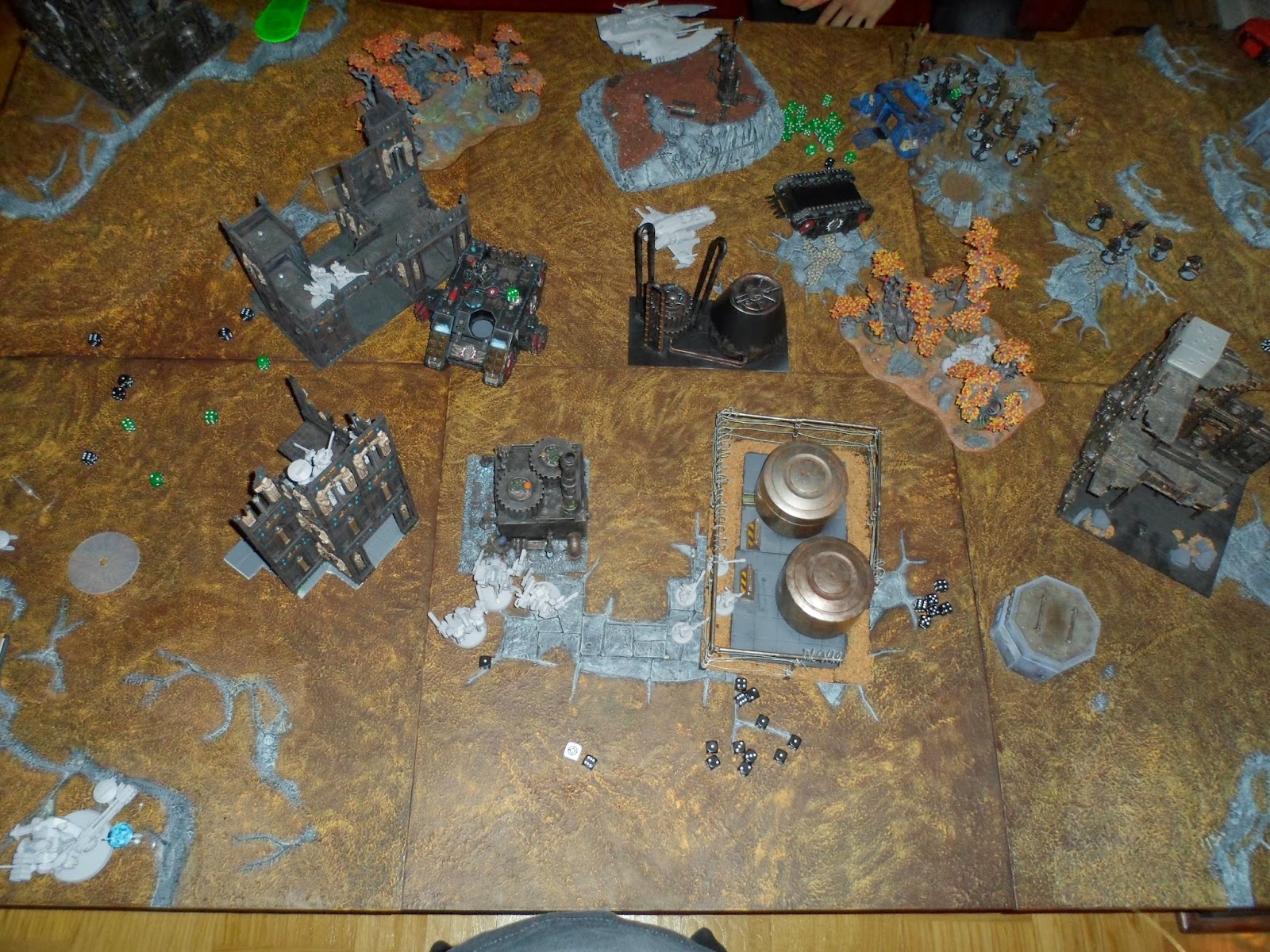 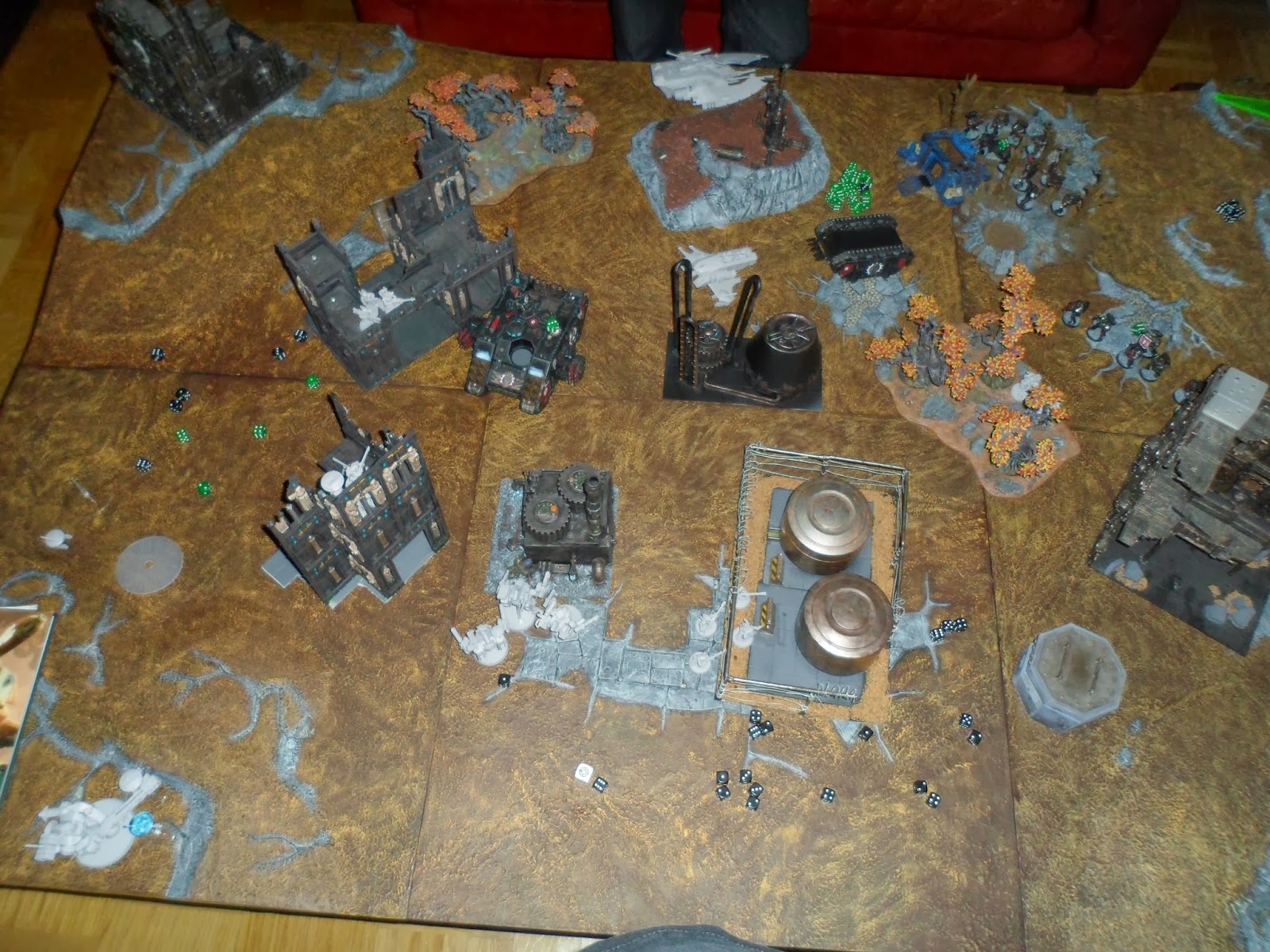 At this point the Land Raider is immobilized and has lost two guns (the ones that would have been useful). So it's finally out of action, but it simply refused to die! 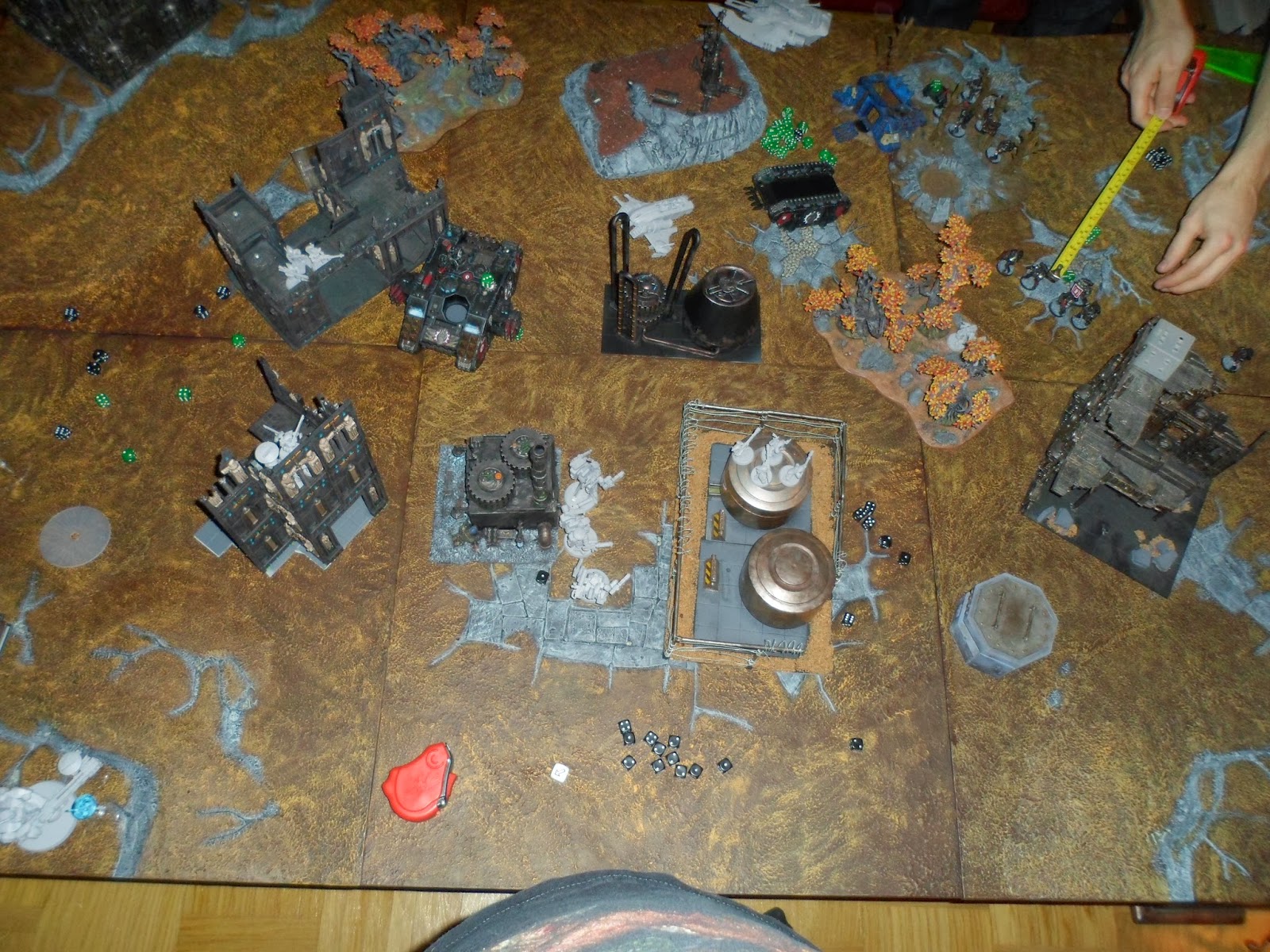 Wave Serpent turbo boosted forwards and dropped off 10 invisible Guardians (this was turn 7 so couldn't be bothered to unpack them) who contested his Objective in the forest and made sure I won by holding my own, slaying warlord and getting Linebreaker.


So, two games against the Iron Hands! And what did I learn? They have gotten a lot more annoying to kill. Especially those Characters and vehicles with It Will Not Die. It's really frustrating at times! Big boost for them for sure!

I also learned that playing Chosen is fun. They wreck face and rock and roll with the best of them, especially against Marines. The Nova-power is also very much awesome.

In the second game I made two huge deployment mistakes. Losing Illic so early sucked, and the other one was putting the Broadside way off. He was blocked from shooting most of the game really. I should've put him more forward to have been able to take advantage of his shooting more. I also learnt that Tau are very forgiving to play. Just point and roll dice, it'll be okay. I don't think I'll play them much until I've painted them at least, so I can at least look good on the battle field.