First battle report! So at the time of writing the new Chaos codex is on the way, which means I wanted to try some silly stuff. First off I've had both Ahriman and Khârn standing on a shelf (unpainted!) for a while, so wanted to try them out before they get new rules. And what better way to accompany them than a host of Bezerkers and Thousand Sons? I also wanted to try some distraction tactics so add some Obliterators, of which one was alone which I was meaning to deep strike behind enemy lines to cause as much trouble as he could.
On the other side of the table were the Iron Hands who this time around fielded a very troop heavy list supported by Devastators and a Vindicator. I had a feeling both that and the Storm Talon would come today, but decided to simply ignore them...

Then we also wanted to try out some Cities of Death! So we chose the scenario High Ground from the book, which basically is king of the hill. The building/ruin in the middle is the one objective - the player who has a scoring unit in it at the end wins. We modified it a bit to fit 6:th edition, as well as limiting Stratagems to one each that we also decided to randomize from the Key Buildings chart. I got Fuel Reserve (= +1S to all Template weapons 6" from the building) and he got Feel no Pain while inside the key building.

We rolled for Warlord traits, Iron Hands got Furious Charge in opponents deployment zone and I got a re-roll for reserves. Nice one!

I then generated my psychic powers for my two Aspiring Sorcerers (I decided to keep the original five powers of Ahriman rather than generating three new ones). I chose Pyromancy and Telekenisis, and got the primaris of Pyromancy and the Dome (blessing giving a unit a 5++ that can "bounce").
We then rolled for Night Figthing in turn 1 which we got.

The middle building with the antenna in it is the objective, the building to the left has a Medic and the one above has the fuel reserves.
Iron Hands won the roll-off to go first and decided to do so. I didn't manage to steal initiative (rolled a five though!).

Turn 1 - Iron Hands Space Marines
So he moved up into the ruins on the left and started shooting stuff. The snipers who had infiltrated into the ruins on the right side saw the Rhino through the open door, one hit and it did rend... I made my cover though. Then two of the Devastators in the ruins to the left who had moved up one floor (which I allowed even though they were slightly too far away to get up) then shot two snapshot missiles at the same Rhino. Of course my kindness was punished immediately as he rolled two sixes to hit and I failed one of my covers saves and of course the Rhino exploded. Oh well. Khârn had been sitting on a shelf for a long time so I guess he could use the exercise. 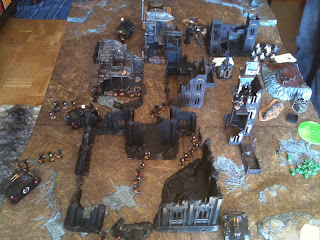 I turbo-boosted the Rhino at the top, my plan there was to get around and get my Power Fist onto the Vindicator or just go straight for the marines in the building. I also realised I made a mistake with deploying Ahriman, I was afraid of the Vindicator so deployed much further away than I planned, but due to Night Fighting and cover I'd been pretty fine deploying them closer to the fuel reserves and the middle...

Then I tried to shoot the Vindicator using lascannons on the Obliterators... rolled double one of course.

First the Storm Talon fails to come in, and then the Terminators who do come in scatters 11"! Luckily for him he was still fine, he didn't manage to roll high enough on his run to really spread them out though.

The Razorback to the left popped the second Rhino easily, and there went my plan of trying to engage him on his side of the board with Berzerkers while the Thousand Sons moved on the objective... I'd just have to meet him in the middle instead. The snipers started shooting Ahrimans Thousand Sons and actually managed to kill one.

Then the plasma squad tried shooting the other unit of Thousand Sons. The Plasma Cannon overheated and promptly killed the marine (first time it was shot ever!). 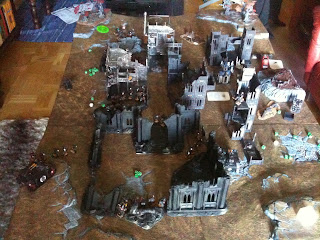 The Obliterator did come in (after a re-roll, good thing I had that one!), and dropped behind the Vindicator to show his brothers how it's done. To prove my point the two Obliterators on the top decided to shoot Plasma Cannons at the Terminators. One of them overheated (but I made my save) and the other one was  a direct hit, hitting 4 of them! Then I rolled three ones and a two to wound... Which he saved.

The Obliterator behind the Vindicator scattered out of the 6" melta-range but was still within 12" so shot his twin-linked melta at the side armour of the Vindicator. Got a glancing hit. Then Ahriman, bugged by the Snipers last turn threw Doombolt and Bolt of Change (supported by Warptime) at them killing two, his unit then managed to miss everything.

The army was now a bit frightened of the one Obliterator amongst them, so that entire half of the table shot everything they had at him pretty much. Not a single failed save suffered, despite lascannons and missiles coming his way - and even a large blast from the Vindicator!

The Devastators however managed to kill a couple of Berzerkers and Thousand Sons with their blast missiles. Then the Terminators decided to charge the two Obliterators who shot at them last turn.The Lightning Claws failed to do anything and thus the Obliterators actually got a chance to strike back at the same time as the Thunder Hammers. They actually managed to kill two Terminators (one Lightning Claw and one Thunder Hammer) before going down.


Turn 3 - Chaos Space Marines
Everything missed or failed to wound. Everything. Except for the one lone Obliterator who had moved up to within 6" and then blasted the cannon of the Vindicator. The Aspiring Sorcerer closest to the objective tried to cast the Dome on the Berzerkers like the earlier turns... but got perils of the warp and just died. Ahriman managed to kill two tacical marines with Doombolt/Bolt of Tzeentch.
The Obliterator then decided to finish the Vindicator in close combat and assaulted it, and exploding it. The Explosion actually killed one Devastator! The Berzerkers from the far away Rhino had reached the middle and charged one of the Tactical squads in the building, wiping the unit and suffering one dead in return. Then it was finally time for Khârn to do something this game as he had reached the middle and him and his lone remaining Skull Champion declared a charge against the tacticals with a plasma gun. It started well as the plasma gun overheated on the overwatch and killed the guy! Then Khârn rolled double one for charge range... 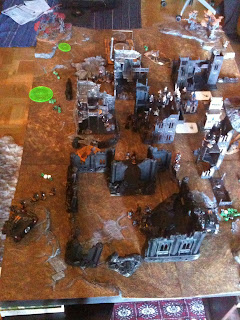 So now the Storm Talon comes in automatically. The Iron Hands proceeds to shoot away both the remaning Berzerkers in the middle (the Skull Champion with a Power Fist survived though) and Thousand Sons (who failed 4 out of 5 saves). The Obliterator got some as well, but he still just shrugged it off. The snipers also managed to inflict one wound on Ahriman with their precision shots (which I chose not to Look out Sir! as troops was more important for me at this point).

The Terminators who've chased the Berzerkers all game finally catched up and charged the lone Champion and killed him with the re-roll of Lightning Claws (again I'm punished for being nice and reminding about stuff!). 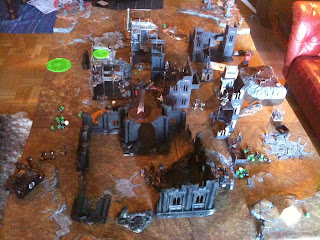 The Obliterator tries to kill more troops and thus flames the tacticals instead of going for the Storm Talon... manages to kill just one despite twin-linked. He then tries to charge in... and gets killed by overwatch... Still a hero though, and he did just what I wanted him to!

Khârn tries to charge again and this time he gets through. His champion kills two out of three guys before Khârn gets to go then... so then I roll his six attacks and... the Betrayer kicks in. I roll two ones that has to go on the hero champion... and I promptly roll another pair of snake eyes. Phew. Then the remaining four attacks slaughters the lone tactical. Whoo! First blood for Khârn!

So he just continued to shoot everything except for Ahriman and three Thousand sons off the board.

Ahriman must've been depressed from seeing Khârn so dully shot down though, because he fails TWO psychic tests (5+6 and 6+6) and the perils of the Warp takes him off the board...

The Thousand Sons however finally decides it's time to do their job and manages to gun down 2 marines. So it's three scoring models to three... if the game ends it's a draw.
...which it does not. So I concede and it's a Iron Hands victory!

In all seriousness there's not that much for me to take away from a game like this with a pretty goofy list and extreme bad luck with the dice... I am however very satisfied with how well my one harassing Obliterator worked out. That I'll probably try in more games!

Other than that my urge to get some Havocs to match those Devastators increases... Despite the incredibly dense terrain and cluttered board the Devastators really did a great job covering the troops on the objective. Even the unit in the back with the Master of the Forge who got a bit misplaced and spent most of the game moving forwards and only shooting snap shots finally managed to take out Khârn in the last turn. Those S8 AP3 missiles really bring the hurt!
Posted by Fagerlund at 9/03/2012 09:20:00 PM