Sadly not many games played this week, only two actually.

My Daemons once again faced off against the Eldar. We played one of the Eldar: Altar of War missions, which in the end had no impact on the game at all really. He brought Mech Eldar, and wiped me out after 6 turns. I managed to kill all his Troops though, but sadly not the Warlord. So he won by 2-0 thanks to First Blood and Slay the Warlord. My chariot actually killed something, woot woot.

The other game was another slug-fest between Orks and Blood Angels. This time they got Purge the Alien, and like last time they were all in the Orks deployment zone fighting. In the end the Orks managed to wipe all of the Blood Angels out, despite two Baals on the field. A single Nob, Warboss and another squad of ten or so Orks were the only ones left standing when the smoke cleared.

So... I'm still in the lead somehow, but now I'll be working a lot and going on vacation... so the others will have their chance to catch up indeed. 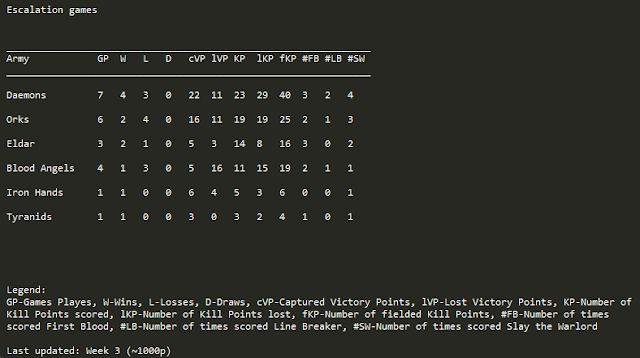