I didn't plan to make a Battle report of this... but the game turned out pretty crazy so...

First, his list had Master of the Forge with Conversion Beamer, 15 Tactical Marines, 8 Scouts... a friggin' Vindicator and a Storm Talon. Uh...

We rolled Big Guns Never Tire, and I got to go first, he didn't steal. I rolled absolutely terrible psychic powers, so ended up with just two Psychic Shriek. I got Hellgaze on the Keeper (S8 AP1 Lance)... and Armour on the Herald.


So I basically started off by running everything forward. Tried to shoot the Scounts. The Warp storm hit the scouts... for three turns in a row actually. The Chaos Gods really hated them this game.
Vindicator killed all but three Daemonettes from the Heralds unit... ouch. Pot shots from Master of the Forge and missiles took a few wounds off the Keeper.
Turn two saw my Screamers come in, the slashed at his lone Master of the Forge... didn't realise he had 2+ armour... and well, he rolled three 2's for saves of course. Bah. Keeper Hellfired at the Vindicator, only glanced it. Luckily for me his Storm Talon didn't come in, but Vindicator shot at the other squad of Daemonettes who had now been joined by the Herald and ran into the forest. So most of them survived since they went to Ground. A few more wounds on my Keeper also.
Turn three I saw my chance since the Storm Talon was still out. The Screamers moved up to charge the Vindicator and the Keeper the Scouts. Both charges made, the Keeper killed his squad for First Blood. The Screamers only managed a single glance however... And then his Storm Talon came in. Killed my Keeper easily since it only had one wound left and he killed a couple more of the Daemonettes in the forest (but Go to Ground again saved most of them). He forgot to move his Vindicator... so three free hits for my Screamers! Yay! I exploded the Vindicator.
Turn four, I wanted some revenge and moved up the Screamers to charge his Master of the Forge. I got lucky and hit and wounded with two out of three attacks, Slay the Warlord for me! In his turn his Storm Talon came down into Hover mode and just barely killed all my Screamers (he did 6 wounds and I didn't make a single save). He also killed my three Daemonttes that were hiding near the sabotaged Objective, and all but one and the Herald of the ones in the forest (I didn't Go to Ground this round though).
For turn five we got a really weird situation... because suddenly Nurgle showed up in the Warp Storm table, and I got 6 S4 AP3 Poisoned hits on his five Marines sitting on the Objective in the black forest... and killed all five. My Herald split off from the Daemonette, but both ran towards the Sabotaged Objective... I got super-lucky with Psychic Shriek and killed 4 of the 5 Marines!! I failed the charge though. The Daemontte ran a full 9" and grabbed the Objective... So now we were in a situation were we held one objective each that was set, and I held another one with a single Daemonette... he could run and grab it with a lone Marine however... I had First Blood, Slay the Warlord and a extra point for killing his Heavy Support. So in other words, he had to kill both my lone Daemonette and my Herald (that was close enough to contest the objective) and run more than 2" with a single Marine. If he doesn't manage this I win. His far away squad couldn't see the Daemonette, so they shot the Herald and just managed to kill her. The Storm Talon moved up and hit quite poorly, but enough to kill the Daemonette... and the Marine ran... 2". Just enough. We rolled to see if the game ended and it did. Iron Hands vi...
Wait, the objective was sabotaged. And it exploded for the first time all game. And it wounded... If he fails his 3+ save he looses the game... but he made it. So Iron Hands victory, 7-6! Yikes. 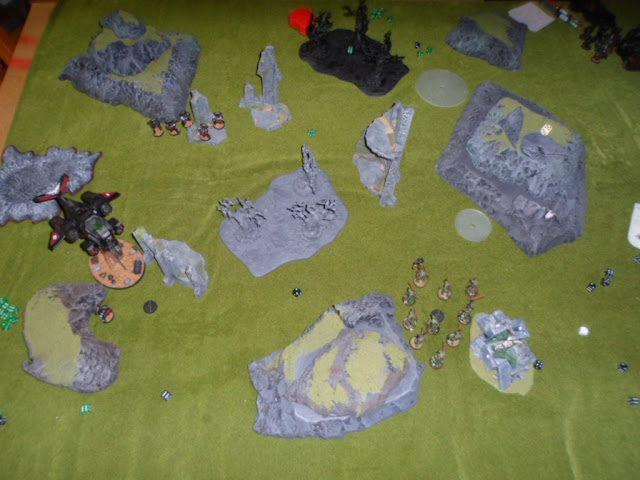 So, here we have it, the final standing after week two I guess: 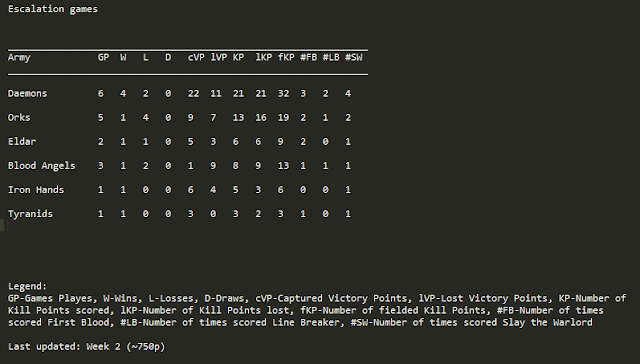