So, my first little game with my new Eldar! Against my friends new Necrons! So basically we wanted to test our new toys out... And there's that.

We rolled for mission, got Purge the Alien, no night fight turn one, he got to chose sides and also won to chose who went first and let me go first. I rolled only Eldar-powers because I wanted to see what they could do. So my Farseer got Guide, Doom and Mind War, Spiritseer got Protect and Drain, the Warlocks got one of each of the ones the Spiritseer got. 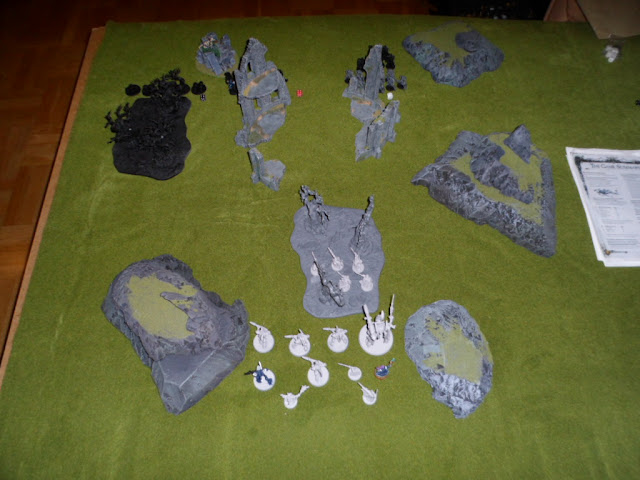 I moved everything forward except the Rangers who stayed in their normal forest. I failed Protect on the Wraithguard. Guided the Wraithlord who killed two Warriors that didn't get back up. The Rangers failed to do anything. The Farseer ran up and used Mind War on the Immortals aiming for the Overlord of course, but only got a Immortal instead. 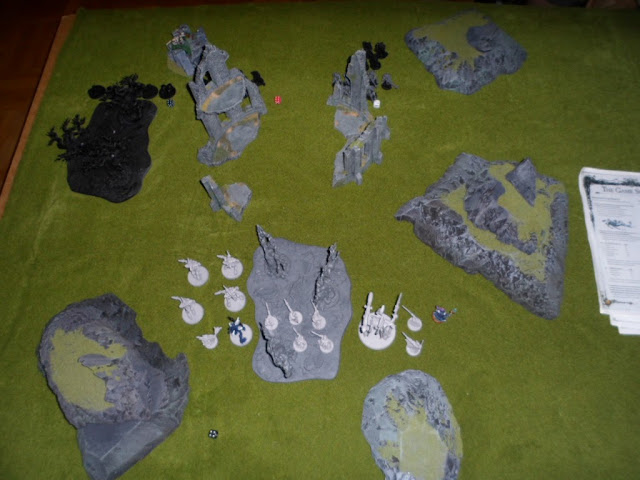 Everything moved up, into Rapid Fire range where possible. Scarabs ran through the forest and revealed it as Ironbark (of course he gets the good cover!). He failed to kill anything, thanks to Rangers going to ground in area terrain basically. Not an eventful turn. 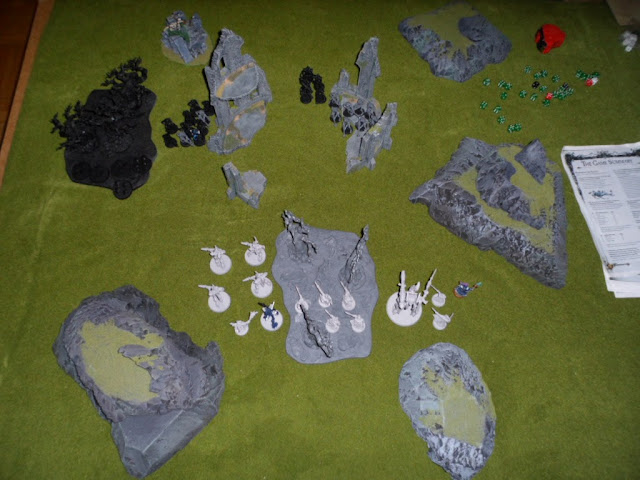 Guide on Wraithlord again, Protect on the Wraithguard and then I Drained the Scarabs (-1WS and I). Also used Doom on the Immortals, thinking the Rangers could need some help... but forgot that they were all ready shooting snap shots so... eh. Wraithlord shot and killed a single Warrior who got back up. Seercouncil moved to be just within 12" so I could throw the singing spear which bluntly missed, and then I tried to run back... rolled a 2. Fleet made it into a 1.
Wraithguard shot the Scarabs... caused 4 wounds... and he saved three due to his 3+ cover. They charged in and killed another base for no wounds in return. 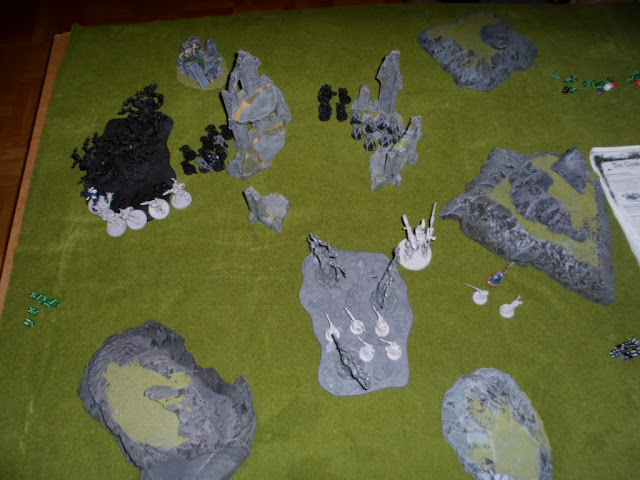 Warriorsquads both moved up to Rapid Fire the Rangers and Seercouncil respectively. Rangers took no wounds due to going to ground again, but both Warlocks died leaving the Farseer alone.
Immortals moved up and charged the Wraithlord, who proceeded to fail Mindshackle and wound himself, then took a wound from the Overlord. Wraithguard killed another base of Scarabs. 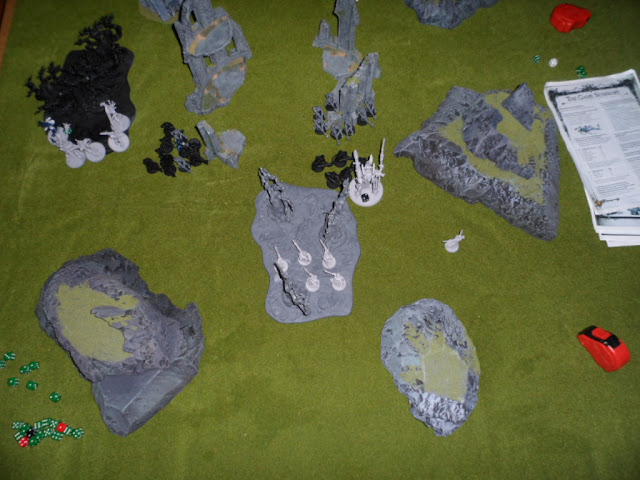 I tried to support the Wraithlord by charging in with the Farseer, challenged with the Wraithlord... who killed himself. Farseer took a wound from Immortals without doing anything in return and ran away. Next turn he got Tesla-death however. 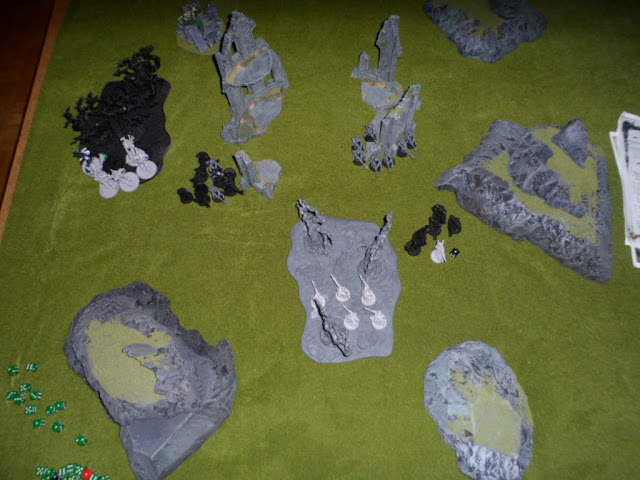 For another 3 turns the Wraithguard and Scarabs waved at eachother. About the same time it took for the Warriors to shoot the Rangers who rolled 2+ like bosses. Eventually all but one died though, and he failed his morale and fled. The Immortals charged him... and he actually passed the Mindshackle... was then chopped down of course.
In the end I had a slim chance of coming back, if my Wraithguard could just do 2 puny wounds to the Scarabs in his turn, and I'd have one chance of killing his unit of Immortals and Overlord... of course they only caused one wound since he rolled three sixes for saves... So then the game ended in turn 5.

He got all secondaries and three kill points, I got the Scarabs. So 6-1 Necrons!

Mindshackle Scarabs are horrible.
Anyway, with that out of the way. I have never rolled this many ones in a game I think. The only time I didn't roll ones was for cover saves with my Rangers... but then again, all they did all game was hiding in the woods so... He chose the sides, and thus denied the Rangers the good forest. Instead they ended up in the middle, taking a lot of incoming fire meaning they did nothing all game. I guess Purge the Alien isn't their best scenario anyway, they would rather have an objective to guard all game. But ah well.
And talking of ones... I forgot the Spiritseers ability to cause Wraithguard to re-roll ones against a single unit... now that would have been useful indeed. Silly mistake from my side. Remember your rules.
Wraithguard were not very impressive in combat. They're good at tarpiting though, and well... that'd been useful if I hadn't been charging the Scarabs (another good tarpit unit) hoping for First Blood... but then that cover save happened, and my abysmal shooting didn't help. Next time I think I will have to run them alongside something else... hard to do at this point level though.
Wraithlord... can't really say much. Failed Mindshackle made it so I didn't get to see what he could do in combat. And for shooting... about half of my 2+ to wound rolls where ones. So... yeah.
I knew the Seercouncil was risky with such a small unit, and I tried to keep them back... but then I tried to be fancy and shoot and run out of the way... but Fleet failed me and indeed they gave up First Blood. I should probably have kept them in the forest with the Rangers, taken Shrouded and just been sitting there casting powers with the Farseer. Ahwell!
So, despite the low points a lot of stuff learned. We'll see if I can make some of it count next game!
Posted by Fagerlund at 7/14/2013 11:17:00 PM