So, quite a few games has been played this week! Very nice indeed! Here's a short summary of my games.

My first game was of course against the Orks (this league is our baby after all). So I've added a Herald of Slaanesh and another unit of Daemonettes. Lots of upgrades going on here, because he had painted a lot and we jumped up to 750 points. He added another squad of Boys and some Lootas.

We rolled for mission and got the Relic. So we basically ended up with a slug-fest in the middle. My Screamers came in from reserve and slashed back and forth over the Lootas who didn't do much all game and eventually ran off the board. The bikers flanked me, and killed one of the Daemonette squads (which arrived from Reserve) and then got charged by the other squad for a whole lot of nothing. At least the Herald killed the Nob. The Keeper however did a splendid job, and killed both Boys, Warboss and finished the bikers. Game winner! Redeeming himself! Not only that, but by killing the Boys Riftbringer made it so that I spawned a new unit of 14 Daemonettes... who then proceeded to table him and I got a 6-0 victory. 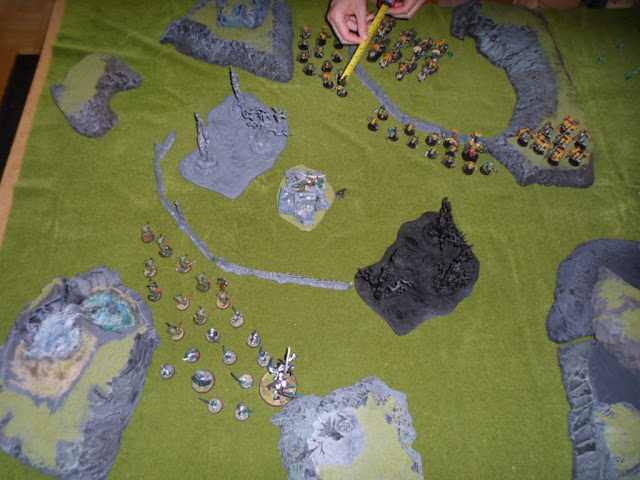 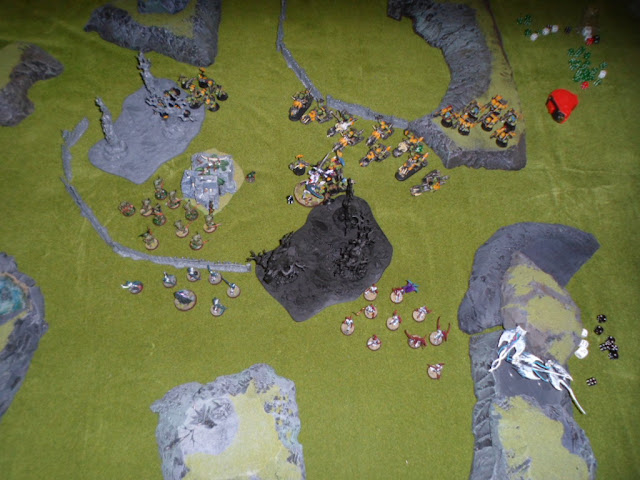 Second game was against Blood Angels. They had added a shooty Dread and some Assault Marines. We rolled The Scouring so his Baal was scoring, as well as my Screamers. I started the Screamers in reserve as usual.

His Baal failed to do much against my Plaguebearers, and was then counter-charged and glanced to death for First Blood. The Assault Marines jumped in the middle and was charged by Daemonettes who didn't do much... the Herald carried them from barely not losing, and then they won by numbers. The Death Company first killed the Screamers in their first charge ever, and later went on to try and help the lone Assault Marine and actually finished off the Daemonettes and Herald.
My Keeper carried the day again however, by first stomping on his Warlord, then smashing his Dread and finally killed the last Assault Marine. He had +1W and It Will Not Die for this game, which really kept him alive against the Dread-shooting. In the end I tabled him, and held two Objectives worth a total of 5VP. 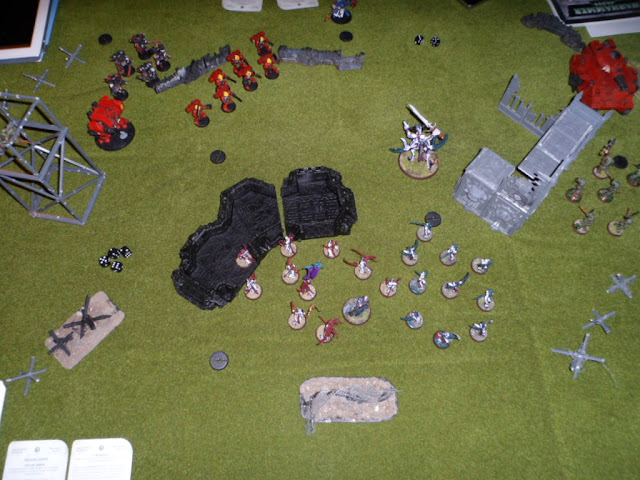 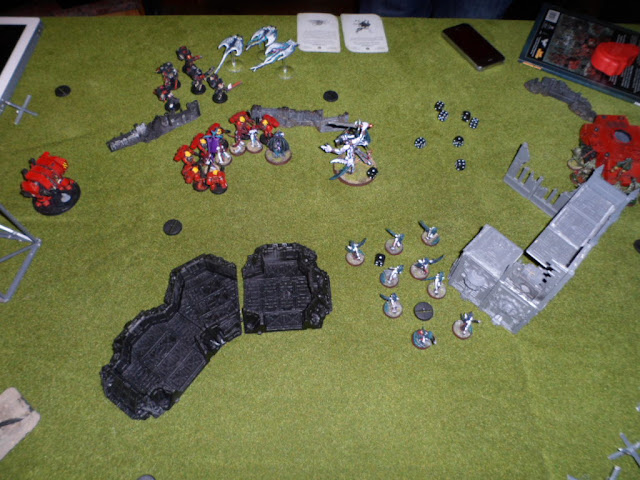 Meanwhile the Orks played against Tyranids, the Relic. I don't know too much of what happened, but the Tyranids won in the end with the Relic, First Blood and Slay the Warlord.

I got a third game in, this time against Eldar. He had changed up his list completely from last week and instead brought one unit of Guardians with a Warlock, one unit of Dire Avengers, Farseer (Warlord), Spiritseer and two Fire Prisms. We rolled Emperor's Will, he got to go first, but I stole initiative and moved everything but Plaguebearers forward. He also rolled Terrify with both his Psykers, and we realised mid-game that it doesn't do anything against Daemons at all. One lesson for the book!

His first turn of shooting almost wiped out one of my Daemonette squads, I kept running... and the Screamers failed to come in. Not good. His second turn of shooting wiped out the other squad of Daemonettes for First Blood. He tried to bubblewrap his Fire Prism with his Guardians to protect it from the Keeper that was running up one flank. I managed to avoid Difficult Terrain, charged in, he Challenged with the Warlock and survived. The three remaining Daemonettes got a lucky charge in on one Fire Prism and actually managed to stun it. Next turn he made the Guardians Fearless with Embolden, I killed the Warlock and stayed in combat. He finished off my Daemonettes but failed to kill any Screamers. The Screamers took their chance and charged one Fire Prism and ripped it's lance weapon off, while the Keeper killed all but one Guardian who stayed in combat because of Fearless, protecting me from Shooting next turn. He moved up Dire Avengers, killed 1½ Screamers. Keeper finished Guardians, and next turn charged in on the Dire Avengers (who lost three to slashing Screamers) was challenged by the Exarch, won and then swept the unit including Farseer and Spiritseer. With only two Fire Prisms left, he tried to be cute and Tank Shocked my Plaguebearers trying to force them further than 3" away from the objective, hoping the game ended in turn 5. Turns out he didn't manage to push them quite far enough away, and the game ended. 5-1 for the Daemons! 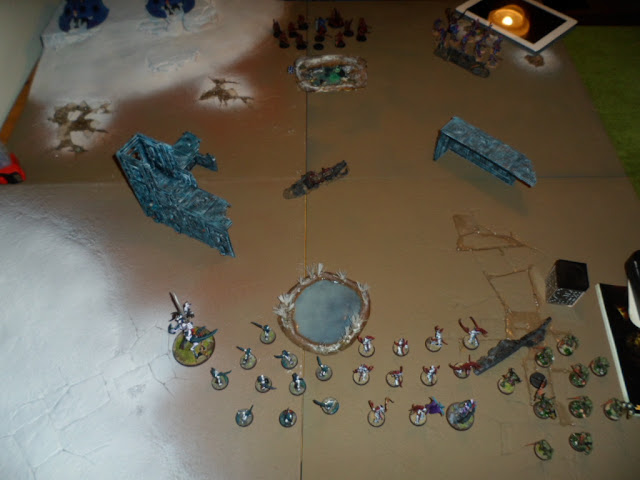 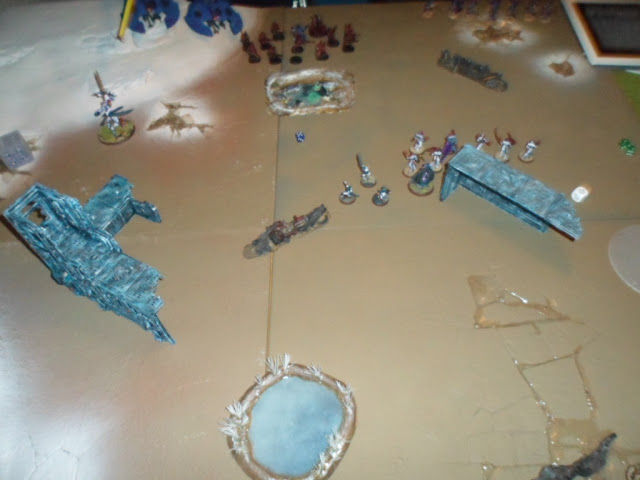 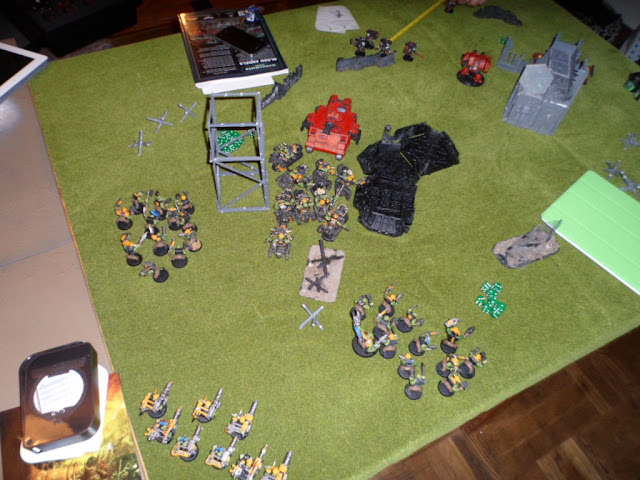 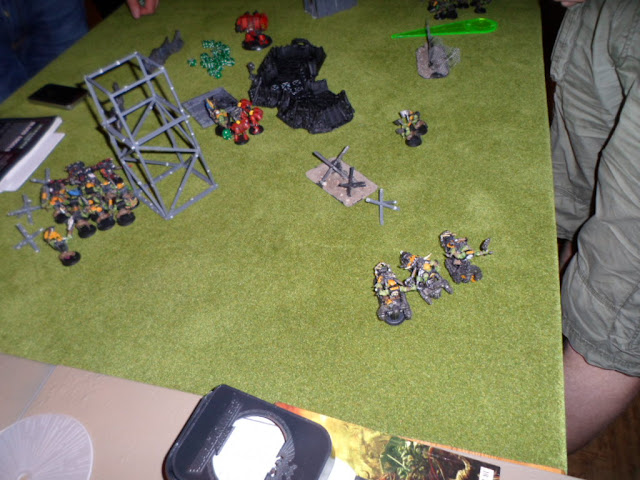 And tomorrow I have a game planned against the Iron Hands, which will probably be the last game this week of the league. A good week for Daemons for sure! Current standings: 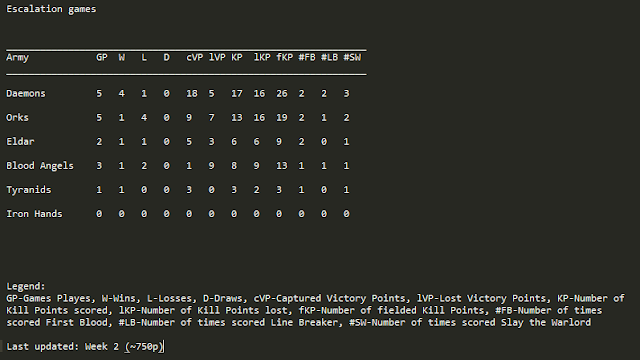