So we wanted to try out the scenario in The Crusade of Fire with all the Daemon World rules and stuff. So here it is. To not make it too complicated and drawn out we went for 1500p. I also decided to bring my Dark Angels... since it'd not give me any advantage with them Daemon-rules and what not.

So for starters I wanted to try out Belial, so in he went. My two units of Deathwing with him. I think I will Deep Strike these two squads in the middle turn 1 to take full advantage of the Deathwing Assault. Also, the scenario gives you points for every turn you control the objective... so if I can grab it turn 1 all ready it will be helpful.

With this get in the middle fast thinking I also grabbed my 5 Scouts. They can Infiltrate in. All though I know he has a lot of Scouts as well, so no guarantee that I'll get the middle with them.

Another unit to get in his face turn one is 10 Veterans arriving by Drop Pod. Hopefully they'll cause some damage. I equipped them with 2 Meltas (one Combi) and a Combi-Flamer. Mostly to be kinda WYSIWIG. Might Combat Squad these, so that either the Meltas are in separate squads, or the meltas+flamer are in the same squad. Depends on his list... if he has a lot of vehicles I'll gamble and separate them. These guys will be joined by a Interrogator-Chaplain, mainly just because I want to try him out - and this is also why I'll most likely NOT Combat Squad this unit. To get the most out of them. But we'll see...

Then I simply filled out with Tactical Marines to advance up as quickly as possible. And that's my 1500p!

The scenario is you set up the objective in the middle and then chose long table edges. If you hold the objective in the end of a turn you get the turn number amount of VP. So a bit different. Also there's Daemonic Possession going on, and my Scouts were Possessed by Slaanesh, one of my Tacticals as well, and my Veterans were Possessed by Tzeentch. One of his Tacitcals were possessed by Slaanesh as well. I got to chose sides, he won who to go first but let me deploy first. I set up my Tacticals, putting all Terminators in reserve, Deep striking turn 1. Scouts Infiltrated up in the middle on the objective, hoping to grab a quick VP.
He got Master of Offence for Warlord trait. No night fight and no steal. 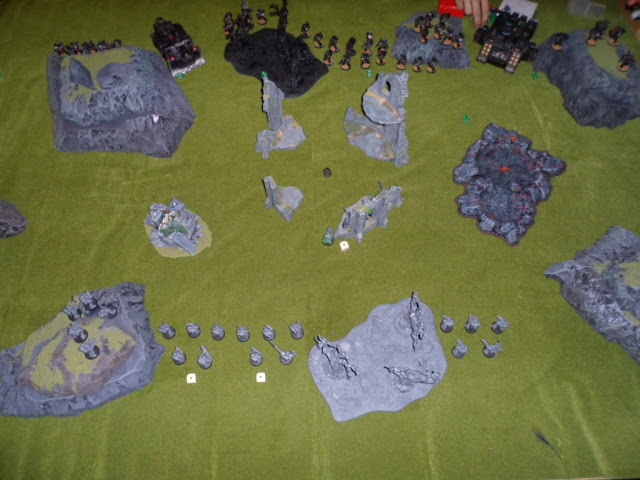 So, with the Daemon World rules the first thing that happened was that I got to chose any of his units and "re-deploy" it using Deep Strike... so I picked up his Land Raider and put it in a corner far away, hoping for it to mishap and die... and it did. Just that instead of dying it got "opponent gets to place it"... so he put it back basically where it started! And since it suffered a mishap that meant a unit of Plaguebearers spawned where the Land Raider was supposed to be... what a weird start.

Anyway, then my Drop Pod came in, melta:ed and exploded the Land Raider anyway for First Blood, and Belial landed in the middle, the other squad of Terminators behind the Vindicator and they wrecked that one too. I also killed most of one of the Tacical Squads, including special weapons and Sergeant. 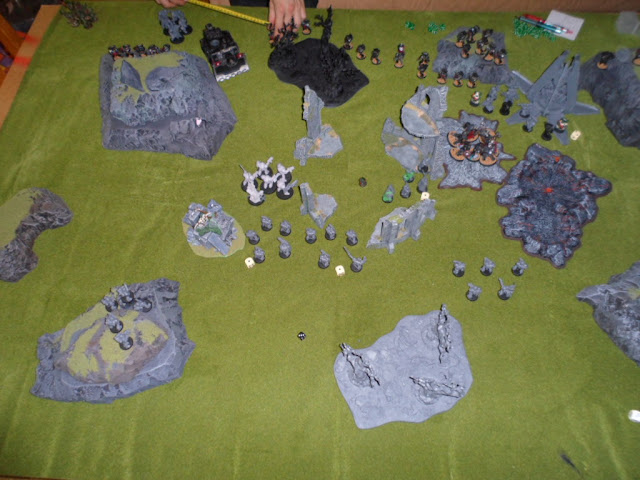 Daemon World was something against Psykers I think. His Terminators were angry, and moved up and slaughtered the poor Scouts leaving them right on top of the objective. In the one corner he shot away all but two of my Terminators, and thanks to the Possession token on the Veterans he also managed to kill 3 of them. 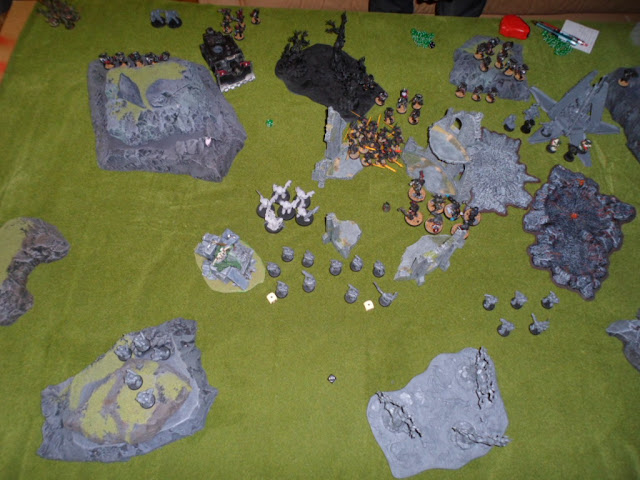 So in total 16 models died this turn, which meant that 15 Bloodletters spawned in the middle... they scattered off to the Iron Hands side of the board and proceeded to charge and kill the last of the Tactical Squad I maimed last turn. The Plaguebearers charged my Terminators but it was a stand off.

Nothing much happened for Daemon World, luckily... the board was all ready crowded with Daemons...

Belial and his Terminators charged the Asasult Terminators in the middle, but before that I shot them up with some plasma here and there. I think I killed two from combined shooting. I also killed a couple of Marines with long distance shooting, and the Veterans charged in against the other large Tactical Squad (after flaming them first). The Interrogator-Chaplain killed two, and the Marines killed two from each side or so... not much more happened there. In the middle I challenged with Belial to protect him from Thunderhammers, actually caused a wound on his Commandor for none in return. My other Terminators were slaughtered though, leaving two alive... 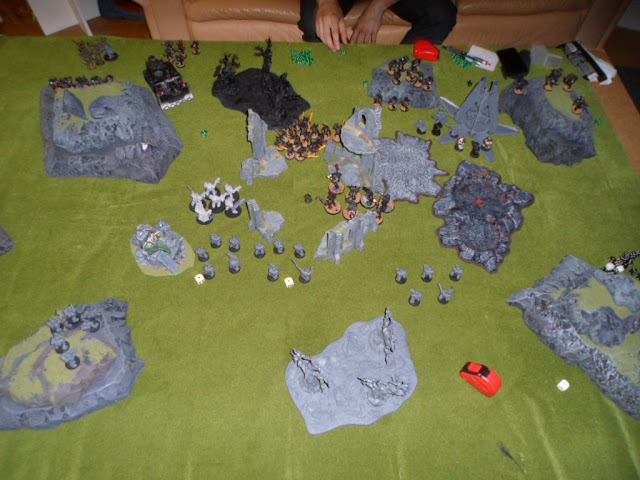 Another Daemon World result that didn't have much impact I think.

We decided that you'd be allowed to shoot into a combat where you weren't involved yourself, so he proceeded to shoot at my Terminators and killed mostly Plaguebearers (we randomized the hits) but also just barely finished off the Deathwing. He also fired frag missiles into the clumped up unit of Bloodletters and killed them all easy.
In the challenge Belial caused another wound (!) for none in return. His Terminators killed one of mine for none in return. 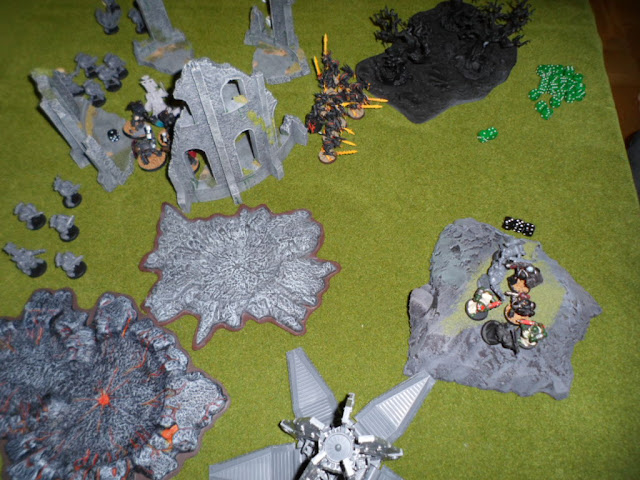 Another turn with over 15 kills... so 15 new Daemons spawned... but because we randomed them into Horrors and I only have 10 Horror-models we decided to make two units, the remaining five became Bloodletters. Both hit dead on in the middle... both charged into the Terminator-fight and killed my last Terminators and one of his. The one remaining Plaguebearer successfully charged his Tacticals, was killed and they consolidated up higher on their hill.

This turn Nurgle showed up and tried to rust my Drop Pod, but failed. 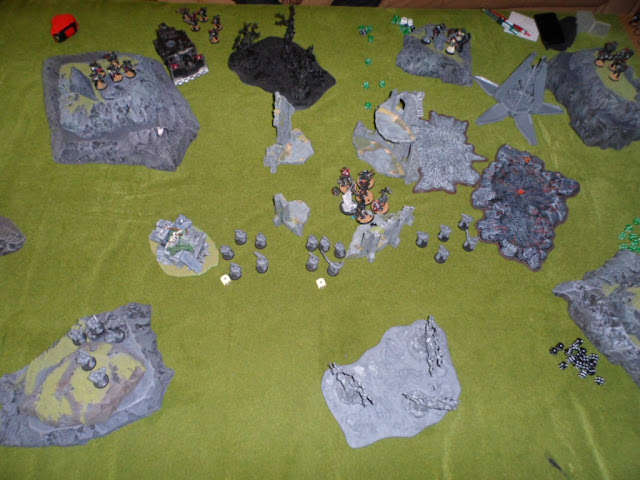 I started shooting into the Daemons surrounding the Terminators (we decided this was okay since they were so many...), killing off a few. I also took some pot-shots at his troops sitting up on the hills and killed a few with Missile Launcher and Plasma Cannon. The Veterans finally won their fight with 3 models left alive. The Warlord-challenge was a stand off again. 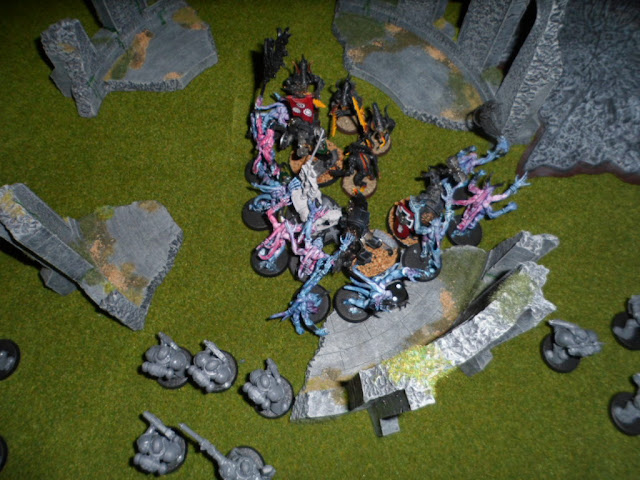 By this point neither of us had many units to actually do stuff with... he moved closer to the middle, killed some of my Tactical Marines.
In the Challenge nothing happened again, the Terminators killed off a few Daemons.

Only five Daemonettes spawned this turn... but they also got right in the middle. They found a gap in the lines and could charge the Terminators. After all was settled only two Terminators and the challenge (which was untouchable) remained from the Marines and still lots of Daemons.

Khorne showed up and gave everyone Rage... yikes.

He tried to kill me by removing a couple of the Possession-tokens, but nothing happened. I again did as last turn, killed some Daemons in the middle and a few of his Tacticals that I could reach with my Missile Launcher and Plasma Cannon. The Veterans started moving towards the Devastators on the hill, but rolled poorly for terrain moves. I also charged one five-man squad into the Daemons, with all those attacks I wiped the Daemonettes out and should've killed three Bloodletters with a single Marine but he made all the saves... The Challenge was once again a stand-off. 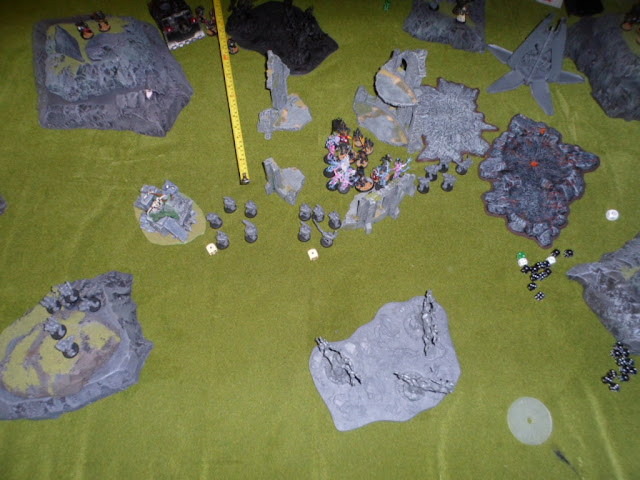 He decided to shoot back at me instead of killing Daemons in the middle as revenge... I told him not to do it since it'd spawn more Daemons... but he wouldn't listen. :P
The Challenge was a stand off once again. (AP3-weapons in a Terminator challenge is really, really silly...).

So, since he killed some of my Tacticals five Bloodletters spawned and scattered once again in his direction... they then proceeded to munch up his five man Tactical unit. Serves him right for killing me instead of Daemons! 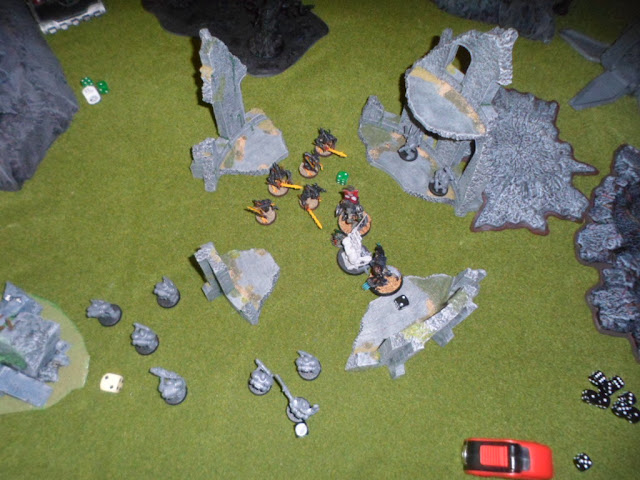 My Veterans moved up to within 6" of the Devatators, charged up the hill... I rolled exactly 6 on three dice. But then he remembered Overwatch and killed my closest guy so I failed the charge anyway... bah.

In the challenge Belial FINALLY managed to kill his Commander and that's +2VP for me, Slay the Warlord and Belials Warlord trait! All Daemons were basically dead by now... I also shot and killed his last scoring Marine, so his only chance to get any points at all was killing Belial and denying me from capturing the middle. 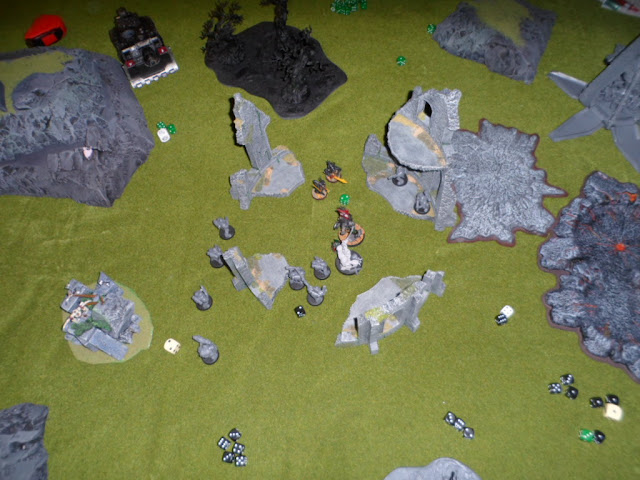 So of course he shot all he had at my Tacticals and managed to kill just enough to spawn more Daemons who didn't scatter and assaulted into the middle. In the Assault phase Thunderhammer insta-gibbed Belial who had been trying to kill Daemons to save both of them... but no, apparently the Chaos had spread further than he thought as he was chopped down from behind... 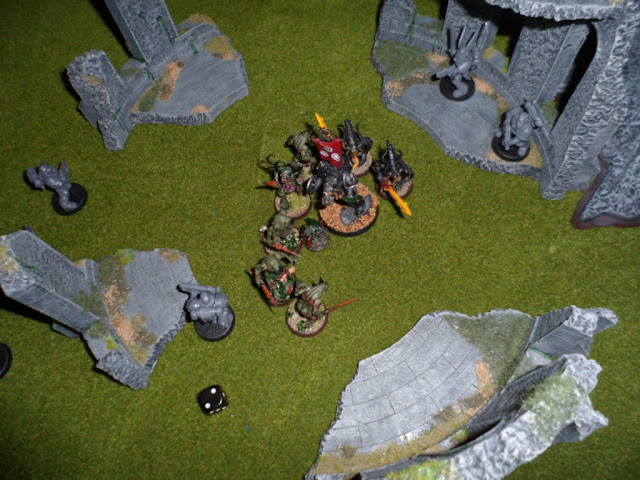 We rolled to see if it ended, and it did. So Dark Angels victory, 3-1 after all!

Well, no lessons to be had here as it was just a fun game... but what a strange scenario! The board nearly had us both beat! I think this scenario would have been even more fun with no Marine-armies however, as Fear had no effect at all... So that's it for next time, no silly Marines!
Posted by Fagerlund at 6/27/2013 06:59:00 PM