So, I have a game planned against Orks! Nice to see them greenies on the field again. I also realised I could make a mono-Khorne army. Then you combine that with the fluff about ever-resurrecting Orks from the Daemons and Orks codices and... profit?

So, this list has a lot of upgrades that I don't necessarily think always is a good idea. But I wanted to reach that 1850 mark. But I don't think it's too bad. One thing I'm not very sure about is the amount of Heralds though... that'll possibly hurt me a bit. But you gotta do what you gotta do when you have limited models!

First off, which feels obvious in a Khorne army... a Bloodthirster! Kitting him out with a Exalted Reward (to replace with a Portalglyph unless he rolls Riftbringer), and one Greater Reward. This other Greater Reward I will most likely replace with a Blade of Blood, for an additional 2-4 (+1A for two Specialist Weapons, and Rampage) attacks every round... very much appreciated when playing against Orks! I only got a chance to play the Bloodthirster once in the old codex, but I expect this guy to kill some stuff. To not have him feel lonely I did add a Daemon Prince of Khorne for Heavy Support as well. Same loadout on gifts, again hoping for Riftbringer, but this time might keep the Greater Reward for extra survivability (otherwise the +1S for a Greater Etherblade isn't too bad, unless I want Rampage on this guy as well).

The other HQ-slot is filled with Heralds. Two on Juggers, and two on foot. The two on foot are basically there to grant extra survivability to the Bloodletter units with some Greater Rewards. One of the juggers runs an Exalted Reward for the Grimoire, and also the Loci that grants Hatred - he will run with the Hounds. The other one has a Greater Reward for extra protection and the Loci for Rage - he will join the Bloodcrushers. I figure they need more attacks rather than re-rolls so...

And that basically tells you the rest of my list. Two squads of Bloodletters, one small squad of Bloodcrushers and a huge squad of Flesh Hounds. Needless to say, I don't really plan to play Objectives here. Portalglyph and Riftbringer are just my backup, the rest will need to get in the fight as soon as possible. Orks are hopefully happy to oblige.

I did take the Banner of Blood on the Bloodcrushers, because I figure that I will at least give them the best chance I can. I don't have high hopes for this unit, especially not against Orks. But we shall see.

So, the upgrades I mentioned is basically Icons and Instruments... most of them doesn't really make sense in this army. I don't really plan to Deep Strike anything (possibly the Bloodletters, depending on Deployment and Mission). It doesn't hurt with extra combat resolution and some re-rolls for the Warp Storm though. And then I got as many characters as possible. Those 5 points extra is totally worth it to help protect against the silly Warp storm (last game I rolled the one to lose a character twice in a row!). And well, these characters also have Greater Rewards again to help protect the unit. A bit wasteful, and I'd rather have some more models, but I don't think it'll hurt too much.

So lets see how this works out!

Rolled for mission and got Purge the Alien with Vanguard Strike deployment. I won to chose sides as well as to go first (which I chose to do). No Night Fighting and no steal initiative. He rolled Counter-Attack for his Warlord when in his own Deployment zone (ie, worthless on a Warbikersquad...).
So, lots of rewards to roll. My Bloodthirster got a second roll on Exalted plus a Lesser and picked up Riftbringer and a Etherblade (since it's a Specialist Weapon that's a +1A), and for Greater reward got Feel no Pain (4+). His Warlord trait was also to grant him Instant Death. My Jugger-Herald got Unbreakable Hide (3+ armour), and my two footsloggers got Feel no Pain and an Greater Etherblade. The champions got Greater Etherblade, re-roll invulsaves and Feel no Pain (crushers). The Daemon Prince rolled Wind of Chaos for Exalted... I decided to keep it due to facing Orks, and also the Portalglyph didn't seem too helpful in a KillPoint game... the Greater Reward was to re-roll invulsaves. 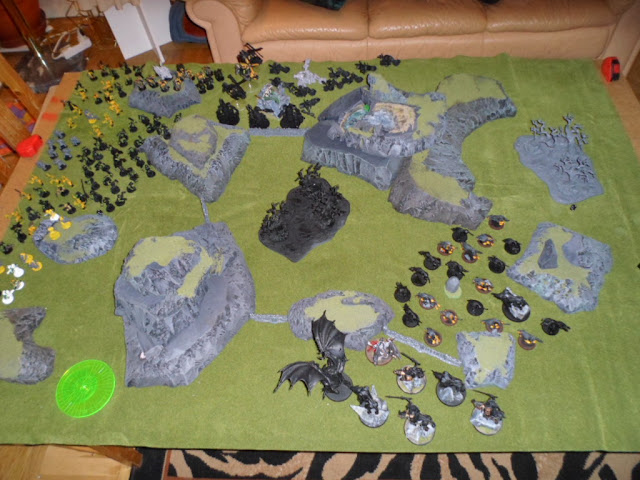 Due to Purge the Alien I left both Bloodletter squads in reserve. So after deployment I won to re-deploy scouts first, and the Flesh Hounds scouted forward, and after that his Deffkoptas jumped over the Warbikers.

I basically ran everything forward. Used the Grimoire on the Flesh Hounds.
Then in the Warp Storm phase Slaanesh showed his face... and took three HP's off the Killa Kans (wrecking one!)! He also hurt two Lootas, but both made their t-shirt saves.
My Daemon Prince landed on top of the mountain, decided to try his new power out and managed to kill two Boys. 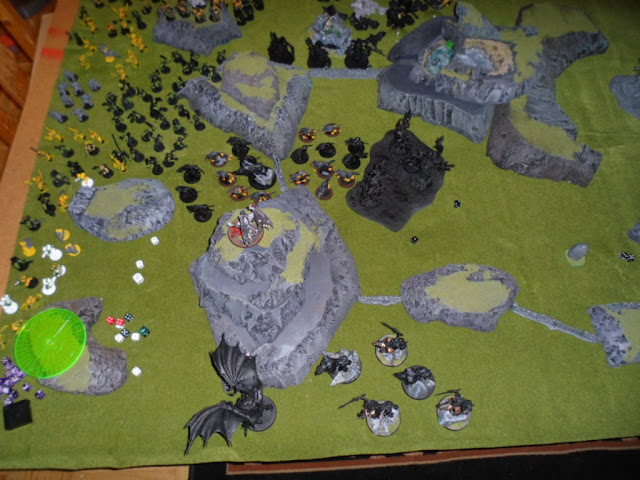 The Warbikers and Deffkoptas were speeding up along the board edge, trying to round the hill on that side and come up behind me. One squad of Boys moved up to the Flesh Hounds, deciding it's better to charge than to be charged.
The other two squads plus the Lootas shot at my Daemon Prince. In total 6 shots wounded... and I failed 4 saves. Bah. First Blood to the Orks!
The Boys charged in at the Flesh Hounds, but due to initiative they lost 9 before they got to strike... and in return they made three wounds. Still Fearless though, so no problem. 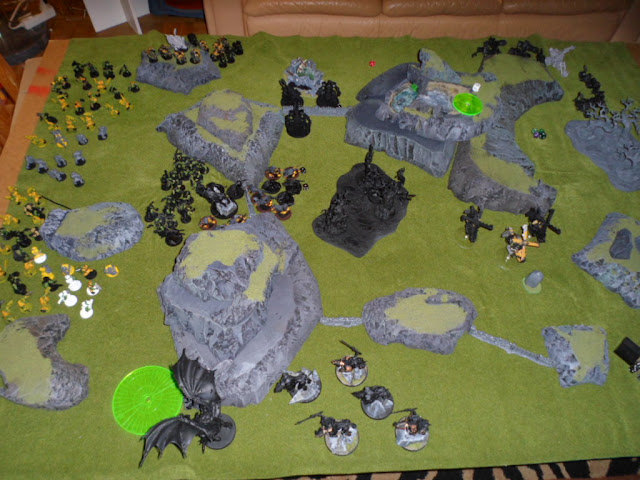 Both my Bloodletter squads decided to stay in reserve, failing to come in. The next fail was the Grimoire which then reduced the Flesh Hounds save by one. Yay.
The Warp Storm decided to be kind to me however and granted me a free squad of troops. Due to limited models, and Slaanesh showed his face last turn I spawned 9 Daemonettes that ran to spread out a bit. The Bloodthirster whipped one Boy to death. Nothing else to shoot...
In the assault phase the Bloodthirster charged in against 29 boys, feeling ballsy. He took two wounds on overwatch which I of course failed to save despite 4+ Feel no Pain on top of 3+ armour. In return he killed 6 Boys however, which was enough for the Warp to open up and spit out five Horrors. So instead of my reserves I got two other squads... strange.
The Bloodcrushers turned around and charged the Deffkoptas, slaughtering them before they had a chance to react. Except for one that was insta-killed on Overwatch. The Hounds lost only two of their numbers despite 6+ save and killed 8 boys in return. 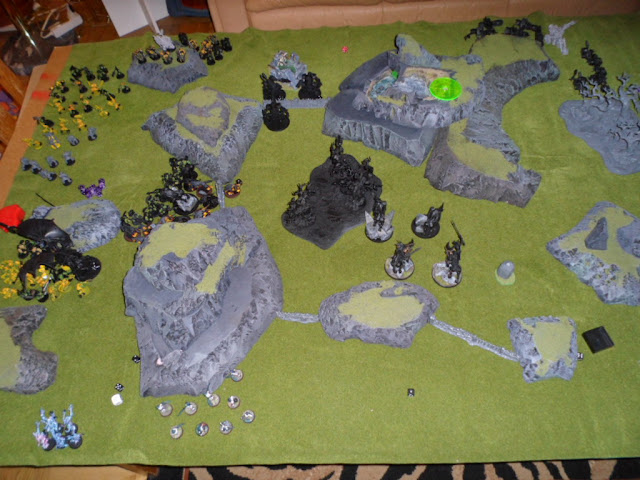 No Dakkajet arrived. The bikers continued to speed around the board to get around me. The Orks shooting was abysmal. All those dice and not a single wound caused.
In the assault the Bloodthirster whiffed a bit, and again I failed my saves leaving the Bloodthirster with only one wound... I rolled 3 on Daemonic Instability though so no problem (a 2 would have been nice though!). The Hounds finished off the last Boys in their squad and overran leaving them free for my turn. 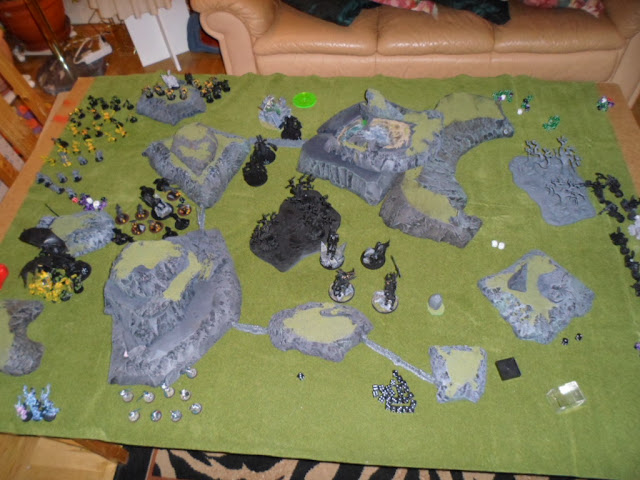 Bloodletters kept staying out. Grimoire failed once again... and to make matters worse in the Warp Storm phase I got -1 invulsaves. I start to understand why people want Fateweaver in lists like this... Horrors got up on a hill, but failed to wound anything.
The Daemonettes failed their charge against the squad tied up with the Bloodthirster, but he started challenging (I finally remembered that was a good idea) the nob and did fine by himself. The Bloodcrushers charged the Warbikers, their Nob refused my challenge and in return I killed 7 bikers. The Warboss completely failed his attacks and was overrun.
The Flesh Hounds charged the last unengaged squad of Boys, taking 8 wounds on overwatch(!) but thanks to Hatred they killed 15 boys and won that combat big. Still Fearless though. 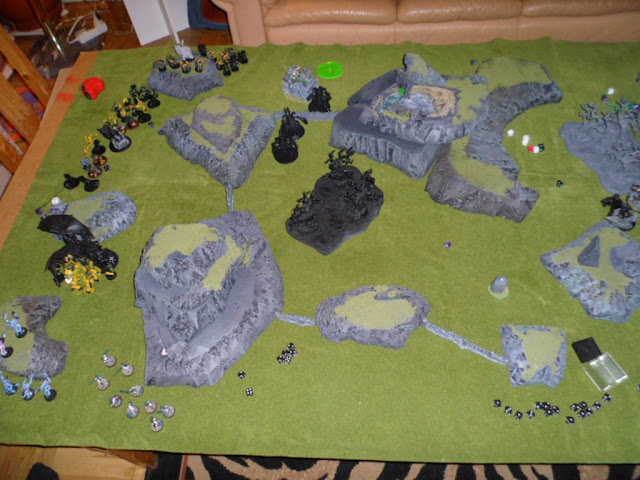 Dakkajet comes in. Waaagh is called and 4 wounds get pass my Heralds armour, two of which are passed off to another crusher. The Shock Attack Gun overkills one Horror. Another falls to Lootas.
Hounds win their combat again, quite convincingly. The Bloodthirster whiffs his attacks again but this time actually manages to save his take wounds (the Nob refused Challenge again). 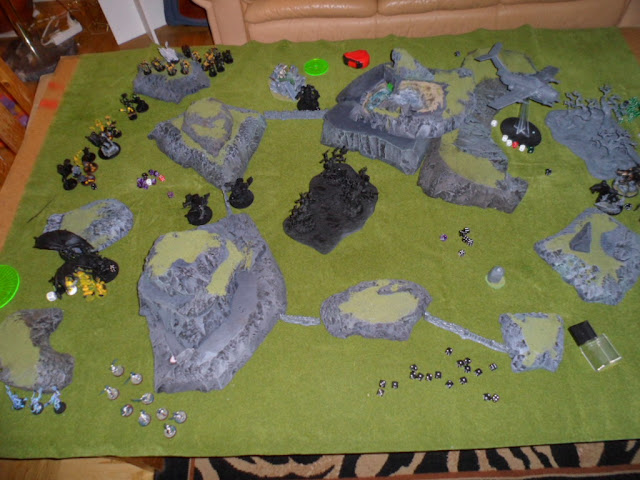 Bloodletters finally show up automatically. So I sit them down in front of the Lootas, the only Orks except the Kans not in combat. Grimoire failed again.
Horrors go and hide behind the hill to not give up a kill point. Daemonettes moves closer to help the Bloodthirster for real this time.
Warp Storm and Khorne comes up. At this time I have two Khorne instruments on the board, so two re-rolls! The only un-engaged units are the Lootas and the Kans though (the Dakkajet can't be hit by Blasts), but despite my re-rolls nothing was hit.
Daemonettes + Bloodthirster finish off their squad (sadly not spawning more Daemons), and the Flesh Hounds finish of theirs (only the Nob survived to the end, but was run down by the Sweeping Advance). 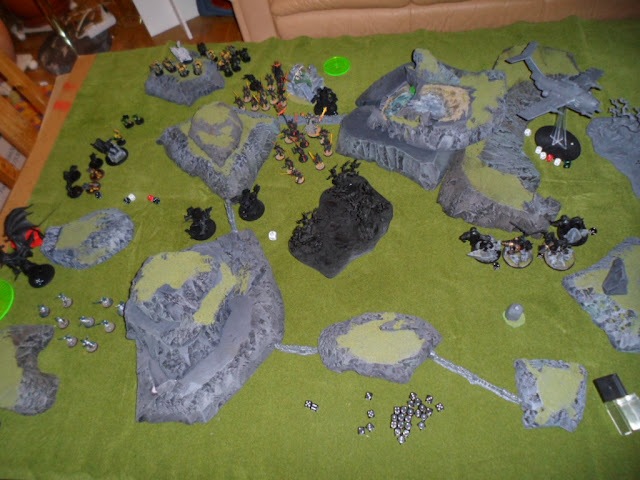 Dakkajet turns around, tries to shoot at the Bloodthirster but I make my saves. The Shock Attack Gun scatters off again, but the Killa Kans (that have basically spent the whole game running back and forward to try and get something in range) and Lootas kills half of the front squad of Bloodletters (including the Herald). But it's too little, too late and the Orks give up.

So... that was a big comeback. In the end of turn 2/beginning of turn 3 I felt like I had lost. But the Orks completely failed their shooting while my units in assaults did exactly what they needed to. They seem to simply hit just hard enough to stay in combat for the next round or two and then due to the incredible speed of the entire list find a new target in my own turn.
Flesh Hounds chewed through 60 boys by themselves (all though they wouldn't have made it without the Herald, he was a champ at tipping the scales). And this despite the Grimoire failing 3 out of 4 turns! This unit is really scary, and hard to get rid off. The size meant everything here, as they took quite a beating but still had enough hounds to pile in and cause the damage.
I also learned that the Bloodthirster is still super-strong. He actually can stand up to 30 Boys himself. But I don't recommend it, because it takes a bit too long for what you actually kill... I probably miss-matched him a bit. Perhaps I should've gone for the Kans, and then Lootas. But ahwell, he did counter deploy against me so...
The Daemon Prince... don't leave him in the open. Despite flying. That was really silly of me. I don't really know why I put in up there like some king of the hill. Really bad idea.
And then in terms of scoring... I feel like with a fast list like this that hits hard you probably don't need more than two Troops. At least not if you have some additional means of creating Troops. Because the Orks never really had a good chance to focus on my Troops even had he wanted to... but that'll take some more testing to decide.
Overall this list felt very powerful, managing a comeback like that. Admittedly against Orks who really, really needs a new codex. But still. Will be a lot of fun to try this list out some more!
Posted by Fagerlund at 4/28/2013 08:59:00 PM