1500p: Blood Angels vs Eldar Corsairs (with a twist)

So, in WD400 they talked about games with Game Masters. I've always wanted to play in a game like that, but as they say the best way to get something done is to do it yourself. So I took the scenario from the battle report in WD400, changed it a bit to be more doable for both sides and asked some friends if they wanted to play. And here we are.

The scenario is this:
We have an Imperial Bunker where I (GM) will place three Objectives. These Objectives can only be captured by the Defender, but can be contested by the Attacker. They are worth 1VP each. In the middle of the board there is an artefact, with rules like a Relic from that scenario. This can be captured by the Defender and is worth 3VP. This Artefact is however guarded by a squad of Thousand Sons with a Sorcerer controlled by me (GM), who will try to escape with it on the opposite board edge and fight anything in their way (taking their turn after the two players).
The Attacker on the other hand is doing Killpoints. Pure and simple. However, the Thousand Sons doesn't give away any Killpoint. Both sides also have Slay the Warlord for an extra VP.
I reckon this is roughly balanced for 1500p armies.

And for players we have the defending Blood Angels and the attacking Corsairs! But why would they fight here and now? Simple, the Chaos Sorcerer broke into the Imperial Bunker by night and stole the portable Library containing many of the secrets of the Blood Angels. Secret rites, not often talked about and when they are in whispers. However he was discovered just before dawn, and the Blood Angels mount a force to reclaim their portable library. Meanwhile the Eldar Corsair notice the commotion on their scans, and takes this opportunity to attack the Imperial Bunker in a quick raid to grab whatever goods or values they can, or even capture some slaves to sell to the Dark Eldar.

And well, with all that backstory in place, and me not playing... we'll see if I can't just write this report up in story mode...

D'raeldn couldn't quite believe it. He had almost done it. So close!

'Move move move you worthless noisy chunks of metal!' he screamed over the warning sirens to his Rubricae, knowing that they were all ready commanded to move as quickly as they possibly could.

The encryption of the mobile library was much too complex for him to break through on the move. He would need a quite strong ritual to defeat the guarding spirit and get access to it's contents. He wasn't quite sure it would contain the data he was looking for... but he was quite certain he would find some clues on how to reach the Webway on this world. He just WOULD get into the Webway by any means necessary...

Wait, what was that? His psychic senses detected something... Eldar? No, surely it was just his thoughts about the Webway that confused his senses? Then he saw familiar shapes in the pre-dawn darkness. No, there were really Eldar here. Surrounded... where did they come from?!

'Prepare to teleport in front of those heretics Brothers, we shall pursue from behind so that we may catch them between us. Our sacred texts must be recovered at all costs.' Brother Librarian Michelangelo voxxed to the other Terminators at the teleportation bay.

He saw those dark shapes, barely visible in the pre-dawn gloom. 'Brother Bael, can you catch them?'

'Affirmative Brother Librarian, I will toast them and you're invited to the party!' the reply came as the screeching sound of the Baal Predators engines started sounding in the dark, and suddenly the darkness was lit up by the flames. Several of the traitor Marines simply melted away.


'Target acquired and well lit, fire!' the voxx came from Brother Didier leading the Devastators. After the barrage only a few of the Traitor Marines were left standing. This would be an easy recovery after all, how could those heretics have thought to succeed with so few?

'The Mon-keighs are moving out of the bunker, Prince. Have they detected us?'

'I'm not sure, they seem to be fighting amongst themselves. But bring that Tank down anyway, it's dangerously close!'

The Corsair Prince was not pleased. This was supposed to be a surprise raid to stop the guard patrols of the supply convoys sent in this system. How had those inferior creatures detected his approach so soon? Lost in these thoughts he heard the whistling sound of missiles fired from the War-walkers... and watched the smoky arc with his keen eyes... and winced in dismay as the missiles simply bounced off the blasted tank. In the distance he could see the bunker lit up by Warp energy unleashed by the Warp Hunter, hopefully that was more successful than the missiles had been. Meanwhile he ordered the advance, staying hidden in these ruins. 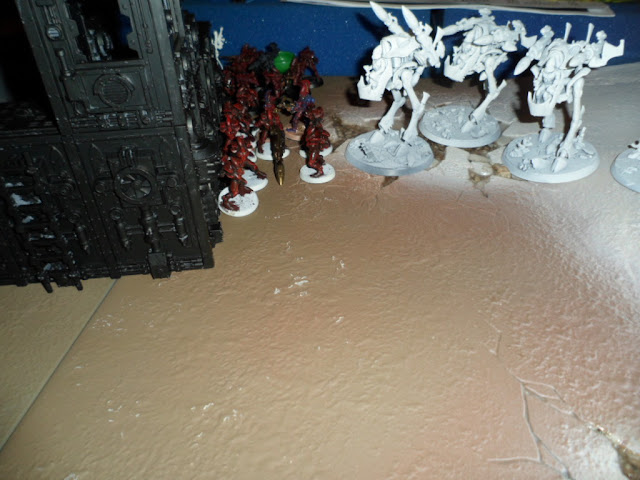 D'raeldn's Rubricae was falling all around him, only three of the automations was still with him. Blasted Blood Angels. He was trapped between the newly arrived Eldar, but thankfully they seem to ignore him at least. He moved as fast as he could towards those ruins...

'Brother Librarian Michelangelo, the teleportation device is struggling we suspect interference by those heretics while they were inside the bunker. We will be delayed' Veteran Terminator Sergeant Pardos crackling voice came from the voxx caster. Brother Michelangelo was not worried however, he had seen the Chaos Marines futile attempt to harm the mighty Baal Predator... all though those missiles had come from a strange direction... best order the Assault Marines up to retrieve the Mobile Library as soon as possible. He started to get a bad feeling... 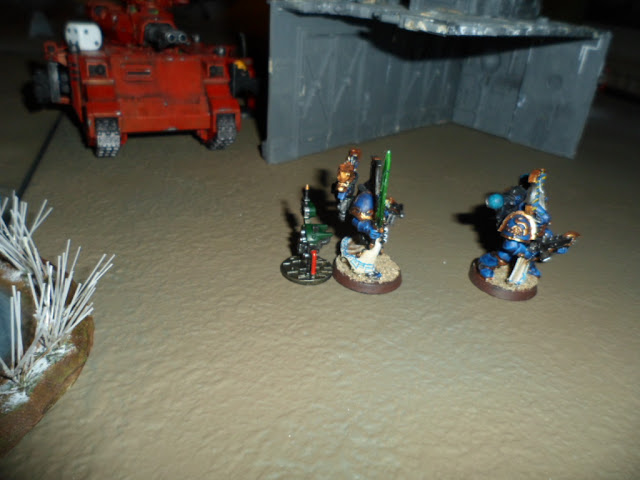 D'raeldn watched the last of the Rubricae go down around him. Not good, not good at all... then suddenly those Eldar in front of him let loose their full arsenal in the dawning light... and the Tank behind him went up in flames! Ah, maybe a chance after all! He saw more of those missiles coming in, the Dreadnought went up in a large explosion as well, the flames spreading well over the bunker. Even those hulking Terminators went out by a Warp-blast. D'raeldn felt the psychic presence of the hated Librarian go out. Suddenly it looked as if his pursuers were not so numerous after all... 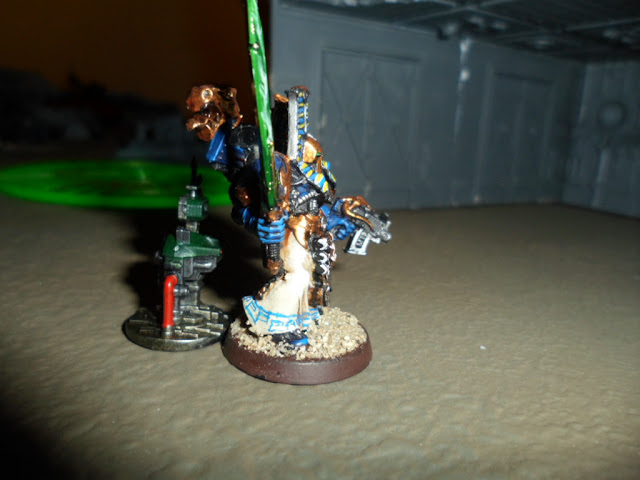 He noticed some Eldar in front of him, the only thing between him and freedom. He quickly channelled his focus into hot searing flames, watching those hated Eldar melt before him with glee. He readied himself to charge in and finish the last ones off... but first he had to check to the Library... yes it was still intact.

When he turned around to start his charge he was suddenly hit square in the chest by a missile and all went black. 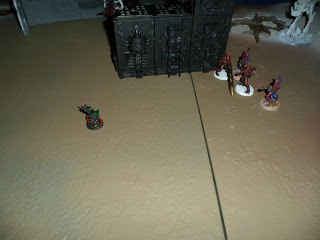 'Command, Brother Librarian Michelangelo has gone down, I take command of this situation. We've just landed inside the ruins. There are Xenos here! Seems those heretics weren't so few after all. Take defensive positions now!' Brother Pardo voxxed on all channels.

Behind him the Assault Marines landed on top of the Sacred Library, and he saw them let loose their Bolt Pistols at nearby Eldar forces, but restraining themselves from charging in. Good he thought, that Library is more important than some filthy Xenos. 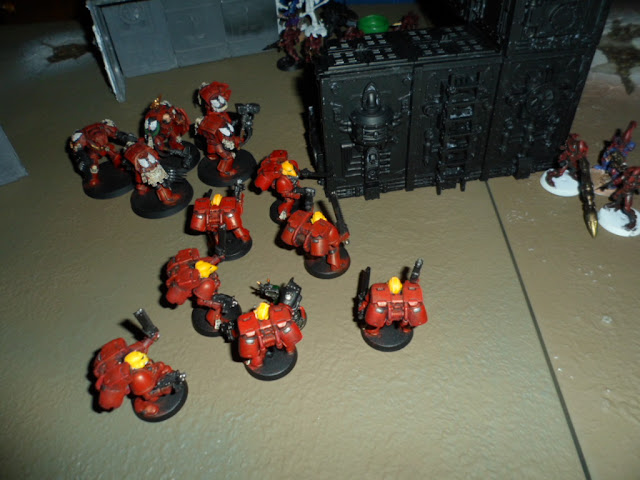 He watched the movements of the Xenos in front of him while receiving acknowledgements from the forces around the bunker as the repositioned to face the new threat. So few of them all ready? No matter, faith in the Emperor would see them through this day.

'Interceptor to Prince, a lone transport vehicle is sighted. I'll take care of it.' 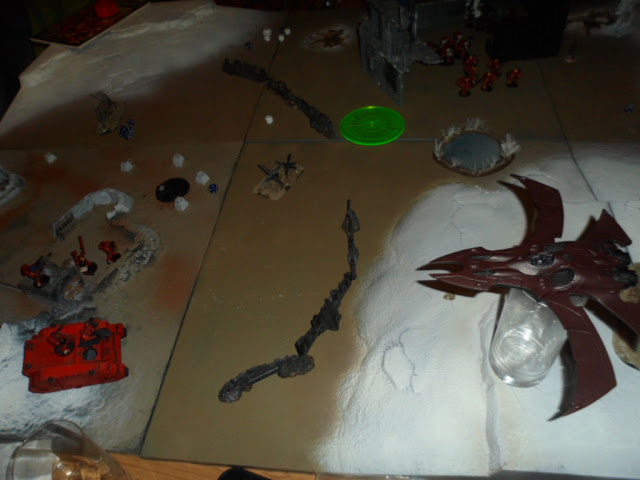 The pilot watched as all his missiles and lance bursts shot out around the lone Rhino. Not a single hit.

The Prince himself was much too bust ordering his Corsairs to let loose on the Terminators that had arrived in front of him. A barrage of Shuriken, Plasma missiles and flamers were let loose. He was pleased to see that not a single Mon-keigh was left standing. Surprisingly easy. 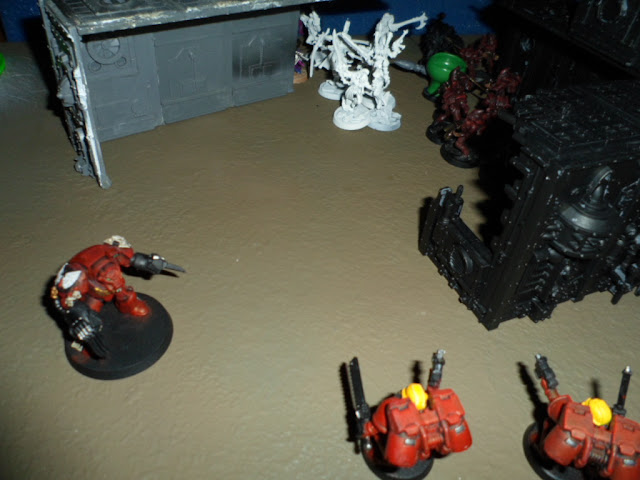 He spotted the Jump Marines in the distance and quickly ordered the Warp Hunter to lock on them. The ensuing Warp blast killed most of them, and he was further pleased to note that the last survivor holding some strange artefact was blasted to pieces by missiles without his direct command. Ah, the day was won!

'They are completely decimated now, we retreat from this field and turn towards the supply convoy instead... this will be a great raid indeed...'

D'raeldn woke up by the shaking ground and as he opened his eyes he saw a large explosion right next to him... he just glimpsed the Portable Library before it was engulfed in the flames...

Blasted Eldar. They had catched on to his plans it seemed. But he would have his revange...

So... it was just one of those days it seemed. The Blood Angels rolled extremely poorly. I think he failed about 50% of his 2+ armour saves... and the fact that the Terminators didn't show up in turn 2 was just adding more bad. Then you combine that with the fact that the Corsairs rolled 'Explodes' for every single penetrating hit they got, and hitting well above average... it turned out very one-sided unfortunately. I mean, when the Dread exploded it took FOUR Devastators with it...
The other part that didn't help was my set up of the board, when I imagined the scenario I thought of the attacked as a close range army, like in the WD-battle report. Instead Corsairs are very much ranged, and I definitely should have thought of this and set the board in a different way. The Bunker should've been in one of the middle sections, that way the Blood Angels would've at least had the chance to have some guns in range... As it were they were completely outranged, and the Devastators only got to shoot once at the Thousand Sons...
So as a first time GM I learned that I should focus on balance more first, and less on the fun stuff... as it turned out most of my fun stuff never even happened anyway... ah well, until next time!