So... I'm gonna try out my Khorne Daemons from this battle again. This time against either Space Marines or Imperial Guard (or a combination...). So since I'll use the exact same list I don't really have anything else to add!

We rolled Big Guns Never Tire (with 4 objectives) for mission with Hammer & Anvil deployment. He won to chose sides, I won to deploy first though. Night Fighting for Turn 1.
I got no scatter within 6" of Warlord for trait, and he got extra VP for winning challenges. His powers were Warp Speed and Smite. My Bloodthirster was doubly blessed (again!), and I rolled Warp Tether (come back from reserves with one wound left if you die) and a Etherblade. For Greater Reward he got re-roll invul saves. My Daemon Prince took the Portalglyph, and also got re-roll invulsaves. Grimoire on the Juggerherald with the Flesh Hounds again. The other Juggerherald got Greater Etherblade, but the Juggerchampion got 3+ armour. The two Heralds on foot got Touch of Uncreation (which I decided to keep since he had quite some armour on the board) and Feel no Pain. The Bloodletterchampions got a Greater Etherblade and a 3+ armour.


So after deployment I scouted the Flesh Hounds forwards! 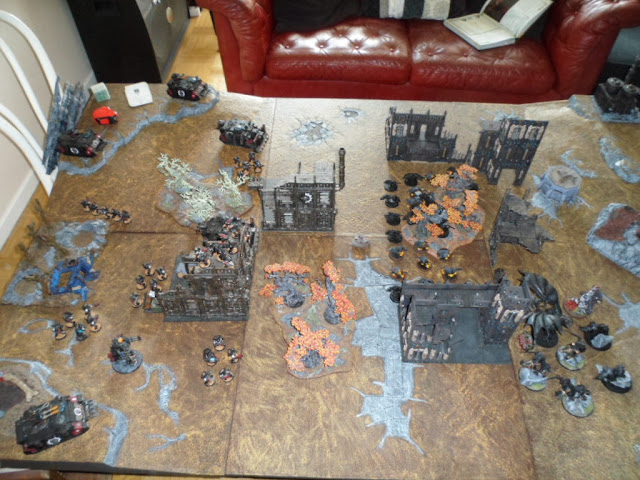 So I made everything move forward as fast as possible. Imagine the look on the faces of those Marines... suddenly out of the darkness of night there are a bunch of burning Flesh Hounds in their faces. Of course the Grimoire failed me though.
The Warp Storm didn't want to be any worse, so it gave me -1 on my save as well. Yay. Great start indeed.
The Portalglyph landed on top of my objective though and spawned 3 Horrors to sit on it. And the Bloodthirster flew up and whipped one Missile Launcher from the Devastators to death. 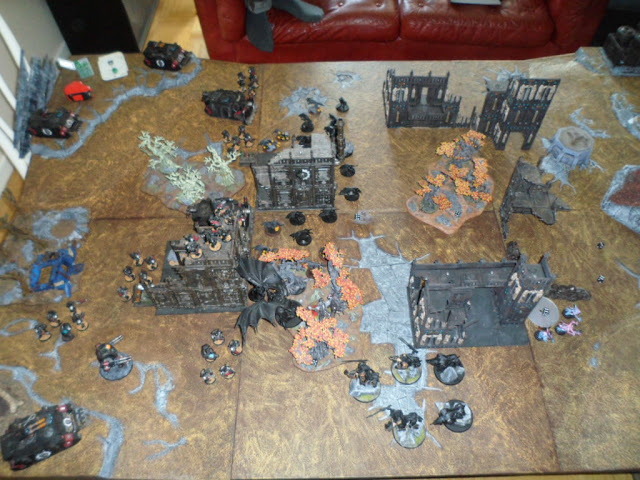 So this was his chance to shoot before I charged in. So he shot most of everything at the Flesh Hounds, but rolled really terrible. So despite me not getting any save whatsoever his entire army worth of shooting only killed 9 Flesh Hounds. 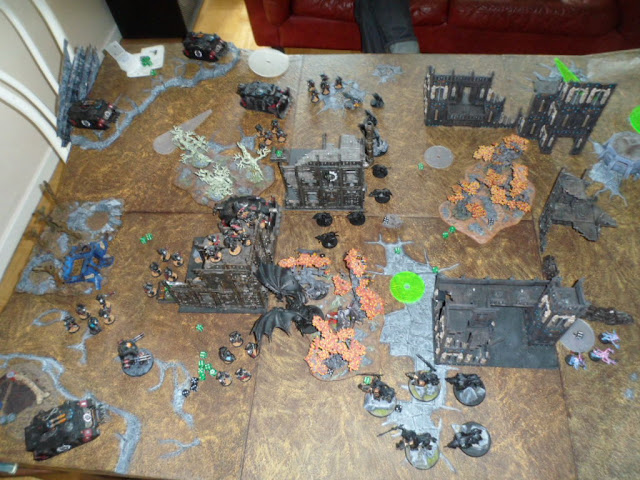 So I started by getting one squad of Bloodletters in and they dragged the other squad with them. I deep struck the first squad off the Bloodthirster since he provided an "icon", and then the other squad off the new icon, getting really close and personal while overloading that flank.
The Grimoire passed, so I moved up the squad spreading out to prepare for a big multi-charge. However, due to my causalities last round I didn't feel confident enough to charge both Vindicators and both 5 man squads in reach... so settled for one of each. A mistake in retrospect. The Hounds finished off the 5 Marines and put 2HP on the Vindicator. Had I charged at least the other 5-man squad I may have been able to stay in combat for his shooting phase... oh well.
The Bloodcrushers charged the Razorback on this side, bashing it to death and granting me First Blood.
The Bloodthirster charged the Dread and took a wound on Overwatch before wrecking it. And the Daemon Prince charged five Marines, killing 4 and thus staying safe next round. 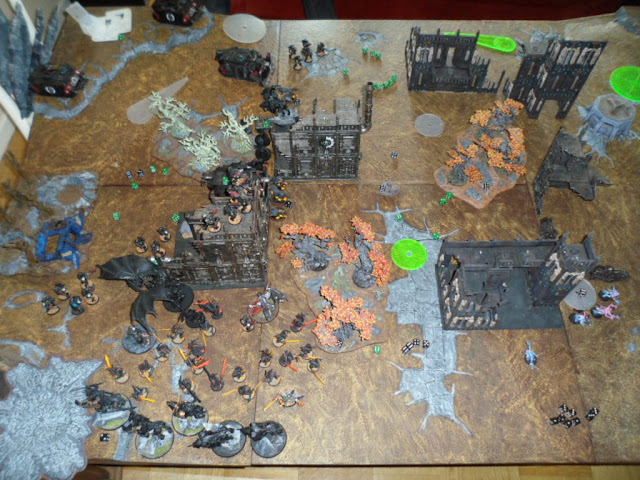 Luckily for him the Storm Talon came on, but unluckily the Terminators stayed out.
The Vindicators wouldn't do the same mistake and staying still again so both backed off to be able to get their shots off. Combined fire between Devastators, Rapid Fire Bolters and one of the Vindicators killed off 12 Bloodletters (spread out on both squads), the Bloodcrusher champion and a couple of Flesh Hounds.
The Storm Talon shot the Bloodthirster and got one wound on him.
In assault the Daemon Prince dispatched his lone enemy. 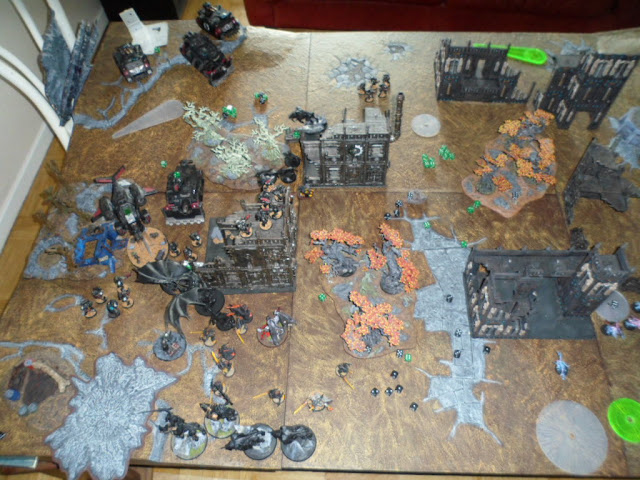 Grimoire fails again. Both the Daemon Prince and Bloodthirster vector strikes at the Storm Talon, causing one glancing hit. The Portalglyph spawns one Daemonette that runs for the middle objective.
In the Warp Storm Khorne shows his wrath and slaughters 4 Marines and two Devastators!
In the assault is where it's at though, Flesh Hounds finish off the Vindicator they started on last turn (one Flesh Hound dies in the explosion), the Bloodcrushers kills their five Marines and the larger squad of Bloodletters kills the five Marines on the Objective taking their place. 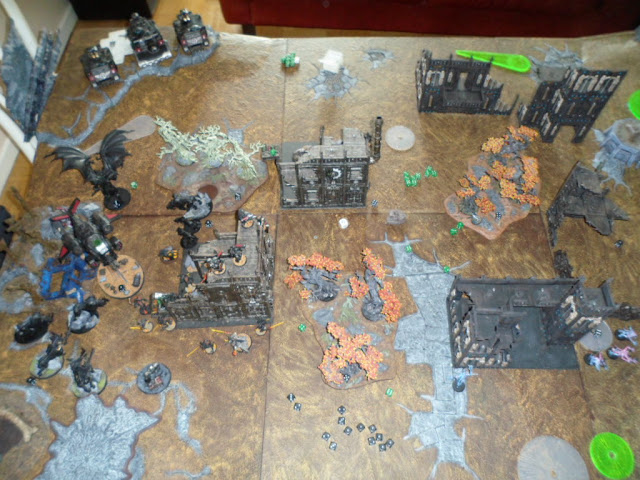 The Terminators once again fails to come in.
The Storm Talon flies across the board and kills the three Horrors on the Objective easy. The remaining Vindicator backs up and shoots the Flesh Hounds... causing no wounds because I roll my needed 6's like a boss (not a single fail!). One of the Razorbacks causes a Grounding Test on the Bloodthirster but he stays in the air. 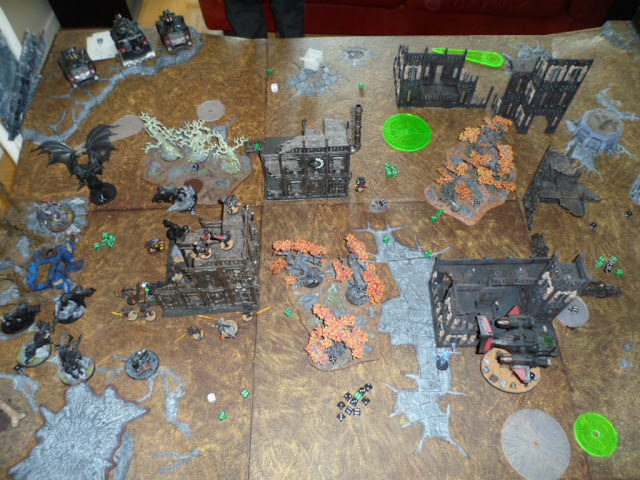 With the Flesh Hounds badly decimated I decide to use the Grimoire on the Bloodcrushers instead and manages it. They move across the board towards the remaining tanks, together with the Daemon Prince and Bloodthirster who lands in front of one each. 2 new Horrors are spawned.
Khorne shows his face in the Warp Storm once again, but this time the few hits he gets scatters way off target.
Bloodthirster smashed the last Vindicator, Daemon Prince takes out one of the Razorbacks and the Flesh Hounds takes out the last survivor from Khorne wrath the turn before. 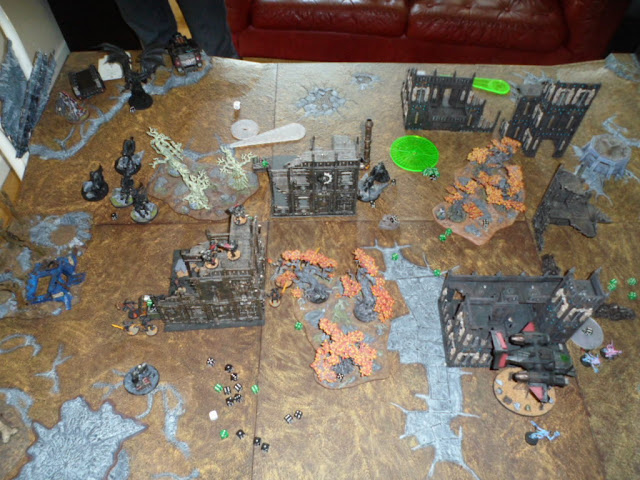 Terminators finally arrive, but scatter way off target and almost into a building but avoids a mishap.
Terminators and Razorback manages to put 2 wounds on the Daemon Prince, trying to get that extra VP for killing Heavy Supports. The Storm Talon, realising nothing can hurt it at this side of the board hovers to take care of the two new Horrors. Devastators and Plasma Cannon Marines shoot at the Bloodletters below them, but I go to ground in area terrain (3+!) and only one dies. 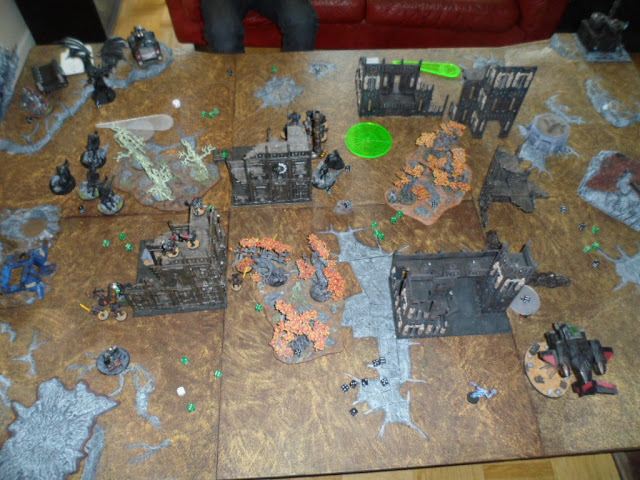 Flesh Hounds a bit isolated in the middle, so I use the Grimoire on them once again and pass, planning to charge the Terminators. Which is basically the only thing of note, the Daemon Prince flies into the middle to try and get closer to the Storm Talon and possibly deal with it should the game continue while the Bloodcrushers charge and explode the last Razorback. The Bloodthirster also charges the Terminators (taking the Overwatch instead of the Flesh Hounds, due to wounding on 6's).
The Terminator Sergeant steps forward and shouts challanges, before he can react my Herald Hammer of Wraths him to death though... The Bloodthirster goes on to kill three more Terminators, the Hounds take one as well leaving 1 Terminator and the Librarian standing.

It's looking grim for him and he's thinking about conceding, but I convince him to at least play the turn so we can have an epic Warlord Challenge.
His shooting turns out exceptional, and he kills every single Bloodletter denying me 2 objectives, the Storm Talon also draws it's straw and kills the Daemonette denying yet another objective.
The Librarian rolls Warp Speed, and gets +3A and I... this is his chance (remember he gets +1VP for warlord trait if he kills me)... because I challenge and he accepts. I completely whiff my roll and only one wound is rolled which he easily saves with his Storm Shield. So he has five attacks, only one needs to go through for him to active Force Weapon... he hits and wounds 3 times... but AP4 staff so my 3+ armour saves it all.
The game continues however. 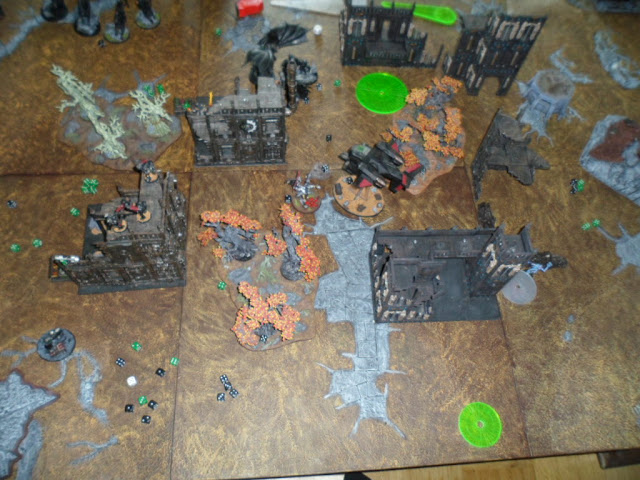 In a silly line of thought I don't move my Bloodcrushers. Thinking the game all ready over. The Daemon Prince Vector Strikes the Storm Talon, but accomplishes nothing but scratching the armour.
In the assault the Bloodthirster stomps the Librarian and the Herald + 2 last remaining Hounds kills the last Terminator.

The last remaining 4 Tactical Marines jump down the ruin and runs for the Objective. The Storm Talon kills the Daemon Prince with help from the Devastators. At this point it's just a narrow win for me... but the game continues.

I realise I might have to kill that last Tactical Squad to secure victory, so move up both the Flesh Hounds and the Bloodcrushers (who still has their Icon of Blood unused). The Bloodthirster Vector Strikes at the Devastators, killing all three for another Victory Point (Heavy Support). Now... the objective is the one that halves the charge distance... and my Hounds fail horribly. The Crushers however roll 12"... which means they charge 6"... but they're 7" away so impossible charge... had I moved them in turn 6...
The Bloodthirster also lands almost exactly 3" away from the objective, possibly close enough to deny but in the end it didn't really matter so.

The game ends, in a close 6-4 for Daemons! (all secondary objectives + 3 Heavy support kills vs one objective and one Heavy Support kill). Had that Librarian won the challenge in the turn I whiffed... he'd had +2VP (Slay the Warlord and warlord trait). So a damn close game in the end!


Grimoire is really, really fickle. But, with a unit of 20 Flesh Hounds, you don't need a save anyway. T4 and 2W is really hard to get rid off. So despite suffering Grimoire fail and Warp Storm that lessens my invul save two games in a row now (and this one was worse as it was in the first turn when all the firepower was aiming for them!) my Hounds has still survived to the end! Really super tough unit. If you get the Grimoire off they become truly awesome, but without it they are still great. Just wow.
And the Bloodthirster... I really like this guy. He simply goes from target to target and annihilates everything he looks at. T6 is awesome.
I have also learnt that Daemons either go awesome, or horrible. Usually both in the same game. They are extremely powerful when they work, but also extremely fragile. Makes the army really interesting to play, as you have to adapt all the time. And with this super fast army you have a lot of fun... shooty edition you say? You get one turn, then I laugh at you. So if you fail to do enough damage in turn 1 you're probably dead.
Hanging on to that was my big mistake in this game. I had the chance to multi-charge both Vindicators and two 5-man squads with the Hounds (they were all lined up nicely so would've been easy). But I underestimated the hitting power of my decimated unit, which meant they killed off the five man squad they were fighting and exposed themselves to shooting next turn. I really should've charged both 5-man squads at least, to stay in combat. But I was lucky this time and got out of it anyway.
I think I need to get another Daemon Prince or two though... and try a real Flying Circus. That lone Storm Talon was really annoying, and I simply couldn't be everywhere to deal with it. Imagine what two of them would do to me... really annoying. We'll see what happens with this list though, because I'll definitely play mono-Khorne again... really fun army!
Posted by Fagerlund at 5/01/2013 01:23:00 PM