Time for some fun! Planned a three player free for all tonight, and I've decided to bring Daemons for the first time in a long while. With the new codex just around the corner it's time to say good bye and give a good sending off. Now, I'm very lacking in owning "what is good" for Daemons - so I'm just going for something that should be fun. You can't spell Slaughter without Laughter. So I'm taking this chance to try the Bloodthirster! Accompanying him will be a large blob of Bloodletters led by a Herald as well. The Herald has Iron Skin and is only there to help protecting against small arms fire by standing in the front. This unit in particular I'll keep my eyes on as I'm planning to use it on a mini-tour this weekend... So it'll be good to see just how badly it will hurt. :D

As a second thought I also added in some Unholy Might here and there as a way to perhaps deal better with vehicles.

The other, and none-preferred wave will be Tzeentch. No, no Flamers or Screamers as I don't own any of those. Instead the Changling because I love how extremely annoying he can be, and also a Daemon Prince with the usual load out of Breath and Bolt. No Master of Sorcery because I figure that if you're going after a flyer you'll want to Vector Strike and Bolt it, and if you go for something on the ground you'll Vector Strike and Breath or Breath and Bolt - so never any need for being able to use all three the same turn and that saves me a lot of points so.

Yeah, that's my 1000 points. I expect to go up against Space Wolves and Dark Eldar. I'm hoping two Monstrous Creatures will be some trouble at this low point level at least - but then there's those Dark Eldar with all their poisoned weapons and what not... I'll probably concentrate on the Space Wolves anyhow - otherwise my shiny, burning AP3 Fellblades would be wasted anyway. With three players anything can happen though...

Edit: Sadly our DE player got ill and couldn't make it, so a 1v1 it was!

We rolled for mission, got Crusade with 4 objectives, and Vanguard strike for deployment. He got extra D6 for runs for Warlord trait I got Outflank on my Bloodthirster. He chose to keep his psychic powers instead of rolling new ones (so Jaws and Living Lightning).  He won both the roll off to chose sides and who to go first - and let me go first.
But since I'm Daemons he was the only one to place any models, and he put the Thunderwolves with the Rune Priest on the board while the Wolf Guard split up and joined a Drop Pod each. He didn't try to steal initiative and no night fighting.

"Rune Priest, vox comm from the outpost on the planet below. They claim to have seen xenos on the surface, and some of the local population has been reported missing. The ships they have sighted leads us to believe there are Dark Eldar raiders in the area. What are your orders?"

"I feel some disturbances... it seems to be coming from the bunker below. Perhaps that's what attracts these xenos. We should investigate, who commands this outpost? Get him on the comm."

"Sir... they no longer respond to our hails. All we get is the same repeated message about xenos."

"Very well, I will go down and see for myself. Send word for Harald and Thorleif to join me, we will need to move quickly."

So, I went for the Khorne Daemons for preferred wave and got them. The Bloodthirster hit close to the Thunderwolves to unleash his Death Strike at them, but missed. The Bloodletters also hit spot on and simply spread out on the hill. 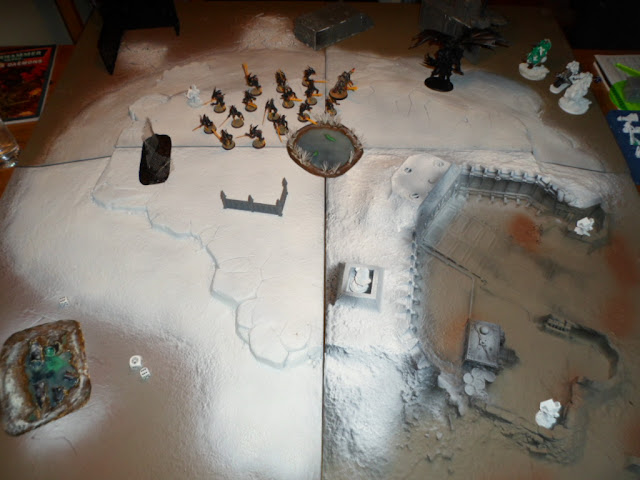 His two Drop Pods arrived, and one of them scattered quite a bit so he was a bit more spread out than intended at first. The Wolves moved up closer to the units that had come out. First he attempted Jaws of the Word Wolf on the Bloodletters, but Khorne doesn't approve of puny psykers and I made my deny the witch roll with a 6.
After that the two Drop Pods who only could shoot snap shots anyway tried to hit the Bloodthirster but failed. The two units then let loose at the Bloodletters (one plasma got hot, but was saved). Combined they killed only 6 Bloodletters thanks to some good saving throws.
The Thunderwolves also tried to charge the Bloodletters, but rolled a 7 when they needed 8, so failed charge.

Neither my Daemon Prince nor my Horrors came in.
So instead I moved up both the Bloodletters and the Bloodthirster to charge the Wolves. Oh, the Bloodthirster whipped them first and took one wound off one of the wolves. Then in the assault the Bloodthirster and the Herald combined wiped the unit before anyone else got to strike. First Blood and Slay the Warlord in one sweep! Both got good consolidation rolls and could kind of hide behind one of the Drop Pods for next turn. 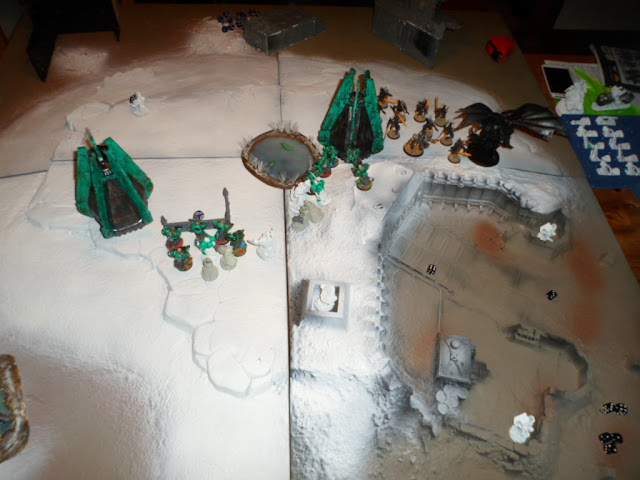 His remaining Drop Pod failed to come in.
But the two untouched units of Grey Hunters unloaded all they got at the Bloodletters once again. I had placed the Herald in front again, but thanks to Plasma he didn't do as much as he could've. When the smoke cleared only 6 Bloodletters remained.
The Drop Pods failed to do anything this turn as well. Oh, and the objective on top of the bunker was revealed as Sabotaged but it didn't explode. 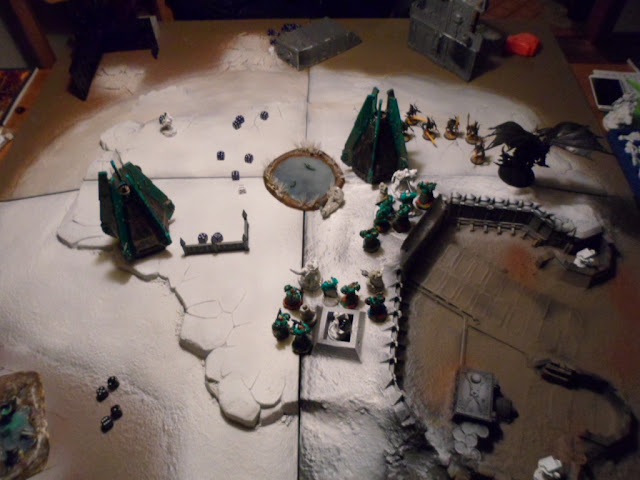 Both the Daemon Prince and the Horrors arrive. Both hit on target with very little or no scatter. The Daemon Prince on top of the hill to start taking care of the closest unit of Grey Hunters and the Horrors in the bunker between two objectives (both eventually revealed to be Skyfire nexii).
Breath of Chaos killed 3 Grey Hunters (Bolt of Tzeentch missed on a 1) since the Wolf Guard Storm Shield saved a couple of wounds, but then the Bloodthirster charged in, was challenged by the Wolf Guard which he quickly cut down and the remaining five Grey Hunters stayed put.
The other unit was shot at by the Horrors with no wounds, and then charged by the Bloodletters. He made his Counter attack-test, so lots of attacks on both sides. I killed 4 Grey Hunters he caused 6 wounds before Power Fist and I rolled...


...yeah. The Power Fist killed one more Bloodletter and the Grey Hunters stayed in combat. 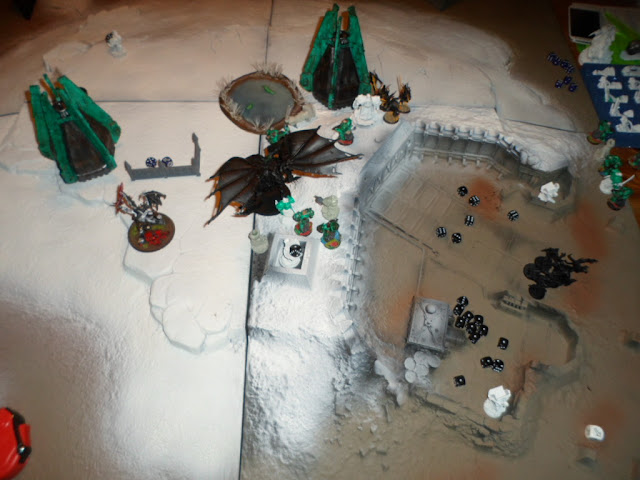 The last Drop Pod came in and arrived in the middle of the Bunker. With not many available targets most if not all Pods shot at the Daemon Prince with no effect. Then the Grey Hunters that came out of the Pod tried to shoot at the Horrors. But the Changeling glamoured them and they failed their Ld and instead tried to shoot the Drop Pod with the plasma gun (which got hot, but was saved). No damage done.
In the combat with the Bloodthirster the Greater Daemon only killed 3 guys, leaving the Power Fist and Mark of Wulven alive - they caused one wound each in return which failed to save. The Bloodletters killed all but the Wolf Guard and three Daemons died in return, but everything stayed put. 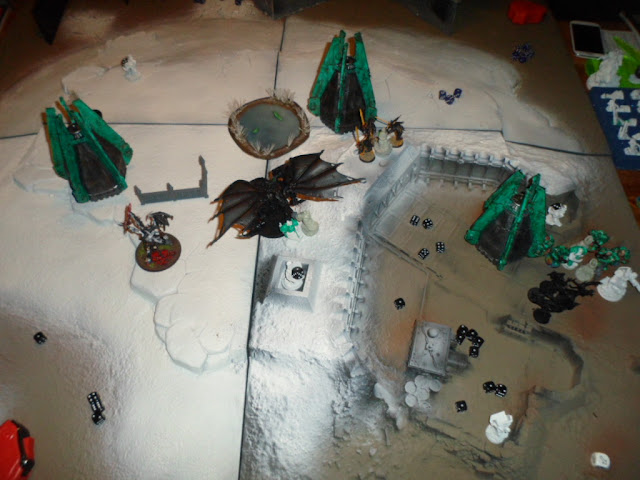 The Daemon Prince flew into the bunker and used Breath of Chaos and Bolt (missed on a 1 again) on the newly arrived Grey Hunters. In a stroke of luck he managed to kill the Wolf Guard and two more guys. The Horrors failed to do any wounds to the same unit of Grey Hunters.
The Bloodletters managed to kill the Wolf Guard and consolidated towards the other free squad of Grey Hunters. The Bloodthirster finally killed the last in his unit and consolidated towards one of the Drop Pods in lack of better things to do. 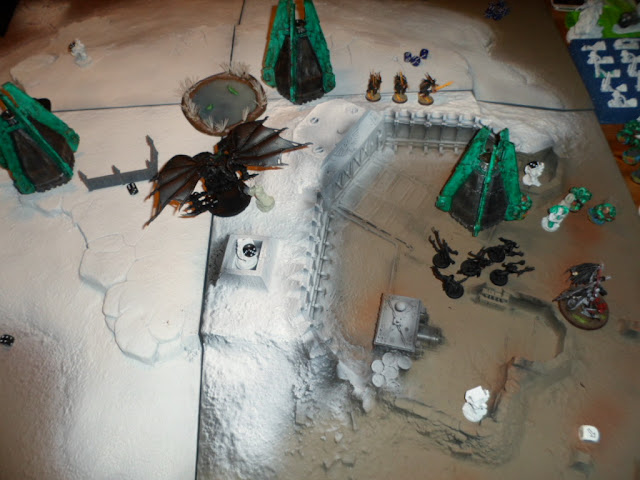 The combined fire of Drop Pods actually managed to kill the last Bloodletters, wiping them out. Then the Grey Hunters tried to fire at the Horrors once again - but again the Changeling managed to glamour them! And again they shot at their own Drop Pod with no effect other than not being able to charge. 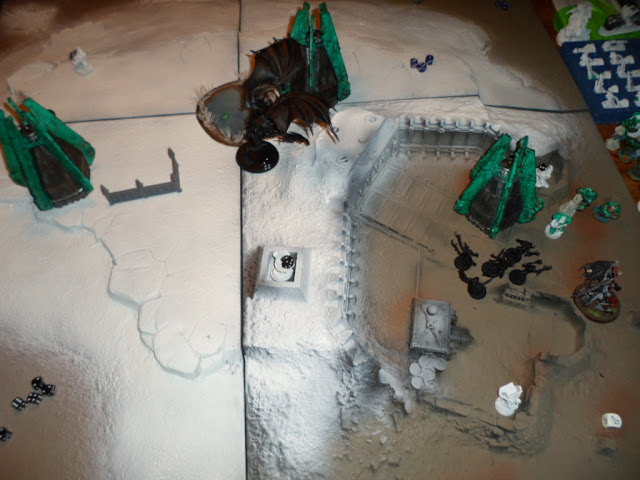 The Bloodthirster whipped the Drop Pod with Death Strike - caused a Immobilized (ie two HP lost) and then charged it and wrecked it. Scrap for the Scrap God!
The Daemon Prince killed two more Grey Hunters with Breath (and rolled a 1 for Bolt once again) and then charged them. He took two wounds to Overwatch though! Once in combat he killed the rest of the squad however.
The Horrors sat nearby and laughed as they always do while grabbing the objective to the south of them.

The two remaining Drop Pods tried to shoot with no effect. After that we roll for the end of the game, and yes it ends.

Well, once again I was quite lucky with dice. I made some really critical saves that made my Bloodletters live far longer than they should have and that really messed him up. I think that I managed to focus my forces in the beginning thanks to his scattering Drop Pod and thus could chop him up piece by piece, which is how you have to play Daemons I suppose since you only get half the army from the start. Luckily for me his decision to start all units in the Drop Pods helped me with this goal. I think that had he deployed one unit in the beginning and dropping the third Pod empty I'd had some more troubles. More bodies on the ground would've forced me to really consider my priorities - had he done so I don't think I'd been able to charge his HQ-unit and the Rune Priest might've actually had the chance to do anything.
But wow does the Bloodthirster hit like a truck! He killed well over his own cost with ease! I hope the new rules keep him similar to this, or even with some new tricks perhaps.
But heroes of the game was of course the large unit of Bloodletters. They performed well over my expectations. Now, in this game they were of course helped by the fact that there wasn't that much that could really shoot them the turn they arrived (two units of Rapid firing bolters is nothing to scruff at though) which really helped their survivability in the long run. But even so I think it showed that they can actually take a lot of hits and still be rather effective once they reach combat. A unit of 6 wiped out 8 Grey Hunters with their Wolf Guard. Good job! This does help me with how to properly use them this weekend, where I'll have a lot more guns pointing down at me...
Oh, and Changeling. <3 I really hope Mr Kelly didn't change your rules too much!

"The bunker looks abandoned... no wait, is that a figure moving there?" Harald pointed as he spoke.

Suddenly the figure exploded in a cloud of blood and a huge rift appeared in the air with burning figures streaming through.

"Daemons? Where did they come from? Bridge, come in! Send reinforcements by Drop Pod at once! Daemons are coming thro...aah!"

The Rune Priest barely had a chance to finish his sentence as a gigantic Bloodthirster ripped through the veil of reality right before his eyes. It roared, and in the roar a beam of heat shot out and evaporated Harald and his wolf, then it came charging in with a axe larger than three men. Then there was darkness and roaring, mad laughter.

Then there was silence over the snowy hill.