Time once again for a fight versus the Imperium! This time I decided that I would play either all Khorne or all Tzeentch - so rolled a dice and I got Khorne!

Well, that gives me reason to try out a couple of new concepts. First one I wanted to try was Hordes. Oh yes. Cultists in large squads gets extremely dangerous with the Mark of Khorne. So in went all my Cultists. Then a pretty large squad of Marines, numbering 15, replacing their Bolters with CCW's and sticking two Meltas in there just because as well as giving them the Icon of Wrath. Will probably run Khârn in this unit. Or possibly with the Cultists. I have a hard time deciding... on one hand he makes the Marines Fearless - but I've all ready taken Veterans of the Long War so his Eternal Hatred won't do anything... but he will give the Cultists Hatred... Because of course I have to bring Khârn in this list. Then two squads of Berzerkers just because I have the models and they're starting to look dusty.

The other concept I'd like to try is Single Mutilators as distractions. Mark of Khorne suits them so... good chance I'd say? I don't own the models, and I probably never will - so have to proxy them and we'll see what happens. Two of them went in. I reckon he likes to Combat Squad his units and a group of five should be possible for one Mutilator to handle. Especially with Veterans of the Long War in there. We'll see if I'll deep strike them or not though. And just to keep them company and a chance to try him out, in goes the Helbrute. I really don't expect anything from this model... but anyway. His Crazed rule suits Khorne I think.

I also like that you can basically make Berzerkers on Bikes and Jetpacks. So I take both. I only have five Raptors though, so they'll be a suicide squad I believe, as usual. The Bikers though, I kitted out with the Icon of Wrath and then Champ even got a Gift of Mutation. I think these guys will be up for anything he might field! And to keep them company I put the Maulerfiend in there. Three fast units should keep him busy while my footslogging horde moves up!

Because I won't really care about objectives I think... Khorne wants blood, so the goal is to wipe him out...

We rolled for Mission and Deployment and got The Scouring with Hammer & Anvil deployment. Just like my last game (and just like that game we used the house rule to not reveal points of objectives until the end)! I get Eternal Hatred for Warlord thanks to Khârn and he got Countercharge in his deployment zone. His Psychic Powers were Warpspeed and Enfeeble. For my Gifts of Mutation I got +1I on the CSM Champion with a Power Fist (woho...!), Raptor Champion +1WS, and Biker Champion Poisoned CC-attacks.
He won the roll off for choosing sides and I won the roll-off to deploy first and decided to do so. He didn't steal initiative and there was Night Fighting turn 1.

Nothing much to say here. I moved everything (except the Raptors) forwards as fast as possible, keeping in cover were possible... and then rolled some great run-moves of 6-4". Nothing to shoot. On we go! 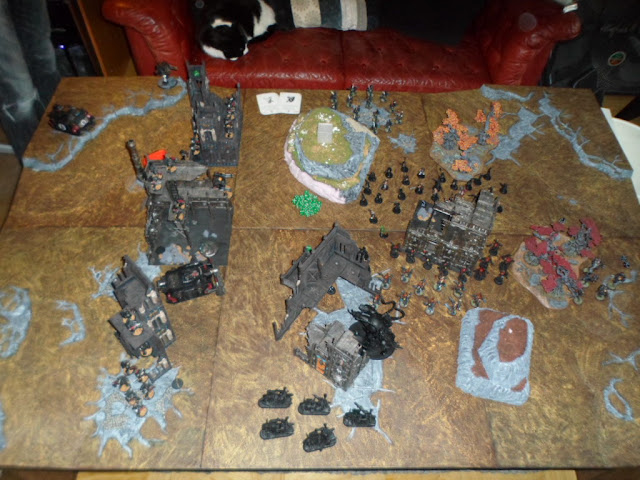 One Drop Pod comes in and lands in the middle of everything and the Marines who comes out starts killing Cultists. The Dreads also manage to kill one CSM. Combined fire from Marines and Devastators kills 3 bikers including the Champion. The Vindicator also shoots at the bikes, but it scatters off and lands on the Maulerfiend but cover save is made. The Bikes then decides they've had enough and flees.

Both of the Mutilators come in, and I drop them in his deployment zone, one to take care of a Razorback, the other for a unit of Marines holding an Objective. Of course they can't do anything else this turn, but...
The Bikes actually rallied and moved into cover, too far away to melta anything this turn.
The CSM on the flank actually managed to kill 3 Marines with their pistols! Then they charged in, and despite needing 10" on three dice through cover they actually made the charge! The remaining two Marines died as well in a flurry of blows. Maulerfiend charged and exploded the Vindicator, which gave me First Blood (Yeah, I'm writing a bit out of order here). In the middle, I charged the Helbrute at the Marines who came from the Drop Pod, eating the Overwatch with that. Then Khârn and his Cultists charged in, as well as one unit of Berzerkers. The other unit of Berzerkers moved into the ruins to claim a objective while getting closer to the enemy lines. All three of these units also shot pistols/multi-melta at the same unit with no special results (except for Khârn getting hot on his Plasma Pistol but not suffering a wound).
In the big combat in the middle I decided to challenge with my Berzerker Champion, and in a stroke of luck he died before he could strike due to his Power Fist. This was excellent news for me, as Khârn killed 5 Marines (and one Cultist) by himself, and the Berzerkers finished of the rest leaving only the Sergeant alive and as every valid target was dead the Helbrute and Cultists didn't even get to fight - but thanks to And They Shall Know No Fear we all stayed locked in combat. Perfect!

The Storm Talon failed to come in, but both the other Drop Pod and the Terminators came in. The other Drop Pod also came in the middle to keep me locked in the middle I suppose. The Terminators scattered off target a bit and he had to take two dangerous terrain tests... failing one. And then he died as well. Silly Terminator!
The rest of the Terminators killed off 3 Raptors however, which was enough to make them flee. The Marines with their meltas from the Drop Pod also killed off the two last Bikers for a Victory Point (Fast Attack). The Dreads managed to kill another CSM each and some Rapid Fire Bolters and a flamer killed a couple more. The Devastators shot rockets into the side of the Maulerfiend, causing two unsaved penetrating hits - one ignored by Daemonic Possession and the other a Weapon Destroyed. Then the Razorback finished him off. The other Razorback shot at one of the Mutilators which I dully saved.
In the middle I challenged with Khârn, he had to accept being alone and quickly died (I also hit another Cultist, but rolled a 1 for the to wound!). As a reward Khârn now had Shred. 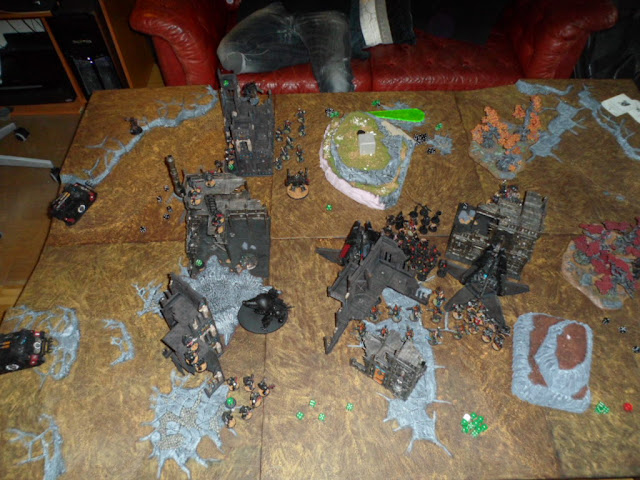 Both my Berzerker squads charged full squads of Tactical Marines. One the squad holding the Objective in his Deployment zone and the other the squad that had come out of the Drop Pod. Both results actually went exactly the same, with two Tacticals surviving in both squads (except the Sergeant was killed by my remaining Champion also, but I forgot to roll on Boons! Shame on me!). The ones from the Drop Pod fled and actually got away though, so I consolidated on the Objective in the ruins close by. The other squad also filed Morale, but was caught and thus locked in combat still.
One Mutilator reached the Razorback and exploded it with his Chainfists while the other reached the Marines, killing four of them for no wounds in return.
The Chaos Marines shot their meltas at one of the Dreads causing a stunned result, then they charged in and the Power Fist finished the Dread off. The other Dread was shot by the Helbrute (Weapon Destroyed) and then also finished off in the assault (in return for taking 2 HP back).
The Cultsists shot their pistols (and Khârn missed) at the Terminators, killing 2(!) before charging in. I challenged his Librarian with Khârn and luckily for me he didn't accept with his Terminator Sergeant instead. Khârn only caused a single wound though due to the Storm shield (and killed another Cultist), but luckily for me the huge mass of attacks from Khorne Cultists annihilated the rest of the Terminators before they got to strike (all though I realise we forgot that the Sergeant had a Power Weapon so he might've killed 1-2 Cultists if he had gotten to strike first as he should have). Thanks to And They Shall Know No Fear we stayed in combat once again though since I caught him after he failed morale. 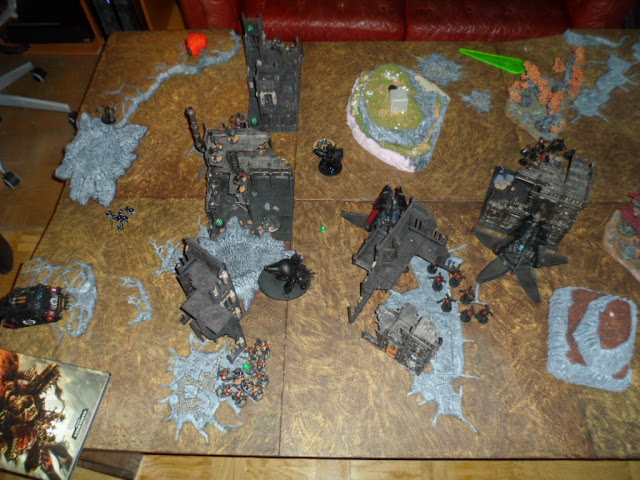 The Storm Talon does show up, and it zooms across the board and kills the last two Raptors for an easy victory point (Fast Attack). The remaning Razorback shot the Mutilator that had killed his friend, but once again I saved it. The Devastators took the last HP off the Helbrute. And the Drop Pods actually killed stuff (1 CSM and 1 Berzerker respectively). The two Marines who now auto-rallied shot a melta and pistol at the Berzerkers had had routed them last turn and killed one, charged in and killed another one before dying to the counter-charge. Then the Librarian died in the duel with Khârn, and at this point he had basically nothing left and in particular no Scoring units (or wouldn't have had if we finished the CC-phase) and thus gave up.


Counting the objectives I held as well as the ones I would easily get on consolidates or my next turn even it turned out I had a total of 10 VP (including First Blood, Linebreaker, Slay the Warlord) and he got 2 (for killing my Fast Attack). Khorne victory!

Well, this was basically an exercise in how to roll exactly what you need to roll to make an assault army work! I had some amazing luck with run moves, charge distances, him failing reserves and even failing armour saves just when I needed to. Had that lone Sergeant in the middle not won his challenge this would've turned out a bit differently I think. As it was a large chunk of my army was unavailable for him to shoot at in a turn where he really needed to shoot at me.
But even if we don't count on my luck I'm pleased with how this army actually worked. It has some fast elements that the opponent has to take care off while the rest of the army can advance and get into their own charges. And in this case they did it perfectly, even though it meant they simply died. But they were distracting enough so that my large blobs could actually get across the field.
I really didn't expect the Mutilators to do as well as they did either, but I guess I landed them in a spot where he didn't really have any defence against them - this combined with the advancing CSM on that flank kept them kind of safe and low priority.
It was also nice to get Khârn in there and have him rip stuff up. He really needs to be with at least one other champion so you can focus him on doing what he does best, killing a lot stuff. Running him with the Cultists was a tremendous boost for them as well - his Eternal Hatred and Fearlessness made this large unit seriously scary to face. Despite taking quite a beating I still had more than enough to just drench Terminators in attacks... eventually you'll just fail those 2+ saves.
Posted by Fagerlund at 2/15/2013 06:27:00 PM