CARNAGE: Battle for the Duck Pond - Part I

So, I found some notes on this game which is one of the last I played in fifth edition. Meaning, it was played before this blog was started. But this game, and the game following it were so epic that I've decided to put them on the blog as well. I only have my notes from them though, so this won't be as much in depth as my normal reports.

First off, a description of the scenario is in place. The name of the scenario is Carnage. It's a really, really old scenario that featured in White Dwarf ages ago. Basically it's a four player free for all with a single objective in the middle. This was played in the beginning of the summer, meaning the bathing season had just started. Therefore we chose to make this objective a Duck Pond - and counted it as dangerous terrain. So who would win the privilege of having the only place to take a bath in for themselves?

And then there was the dirty filth in need of a bath that were fighting. 1000 points each. In one corner were my Chaos Space Marines, and I had decided that my Berzerkers really needed a bath so I had two units of those. In another corner were the Dark Eldar, who're known to be the filth of the universe, are they not? And the third corner held Orks... I don't have to say anything about them, do I? And the fourth and final corner there were Iron Hands, hiding behind their Land Raider filled with assault Terminators... some people are fancy!

Let the carnage begin then! 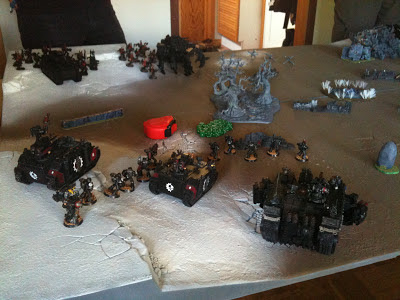 In the start of the game Night Fighting stopped most of the shooting going on. There were a few shots going off, but the most notable were Lootas that killed off my Defiler in turn one. If I recall correctly this was the first time I fielded it as well... My Predator killed a Trukk before that though. Other than that everyone just crept forwards.

In turn two Night Fighting stopped and Dark Eldar showed what they were made off. It felt like they shot away at least half of the Ork army in one round of shooting! Both the Iron Hands and Chaos just crept closer to the middle... watching as the remaining Orks charged the Dark Eldar. Things were really heating up on their side of the board.

In turn three the Dark Eldar were starting to fight back with mixed success against the Orks. They also tried a Dark Lance at the scary Land Raider but nothing happened. The Iron Hands then started to do some damage with their Melta guys who had driven up in a Razorback, shooting at my Predator. My Lascannons was gone. He thought he had then neutralized my tank... sad news for him! My weaponless Predator Tank Shocked his unit of Devastators containing his HQ the Master of the Forge. And they failed their Ld-test and ran off the board! Who needs guns anyway? One squad of my Berzerkers containing my Lord as well then kills off the Melta-squad that shot the Predator, the Lord didn't even get to strike before they were all dead. The close combat between the Orks and Dark Eldar was raging on, so in the Orks turn the only thing worth shooting for the Lootas was my Predator... they manage to stun it but miraculously it survives despite several penetrating hits!


The Dark Eldar were in pain at this time, not much left on the board. The Iron Hands then decided to back away the Land Raider from the objective because he thought it'd be more fun that way (this objective being very old, even the Land Raider counted as a scoring unit). The Assault Terminators then jumped out and annihilated a poor unsuspecting squad of Dark Eldars. The immortal Predator is then back on track, and after it's success with Tank Shocking last turn it tries to ram the Razorback... but is found to be 1/2" too far away. Damn! There are four surviving Berzerkers in the middle... but since the champion has melta bombs and they're hungry for blood after having been shot up all game they chase after the Land Raider instead of going for the objective. Unfortunately the melta bombs missed. The Chaos Lord then wants to be useful too and shots his Plasma pistol at the Razorback... it gets hot...

The Dark Lance kept missing the Land Raider (how can you miss something that's so big?!). The last squad of Dark Eldar rapid fired one Terminator to death... in return they charge back. The Land Raider then shots its Lascannons in the back of the immortal Predator. But since it's immortal it of course is unaffected. There is also one remaining Iron Hands marine on the board who was fleeing last turn, he rallies 1" from the board edge and immediately starts his journey towards the middle to execute his revenge! In the Chaos turn the Berzerkers in the middle gets another chance to throw melta bombs at the Land Raider, and no mistake this time if goes poff! Mission accomplished! My other Predator with a Autocannon which has basically been stunned the entire game until now finally gets to shoot back at the Lootas who has been bothering it most of the game and manages to kill one. It then survives the return fire once again. Then from pretty much nowhere the Ork Battlewagon charges in towards the middle, it has been stunned for most of the game and stuck in a corner... but now it created a wall for a conga line of Boys behind it... The Boys also decided to shoot into the close combat between the Terminators and Dark Eldar, and due to randomness all three hits went on the Terminators... and one died!

The game continues to turn six, and it's getting really tense by now. The Dark Lance now no longer has a Land Raider to try to shoot and thus chooses the second biggest thing on the board. The Battlewagon on the objective! Turns out practising on a Land Raider helped out, because they wrecked it! My Berzerkers were very grateful as they no longer had to deal with that Deffrolla... The Iron Hands shoots what little they have left to shoot at the immortal Predator, only managing to immobilize it though. The last remaining Marine shots the Berzerkers though, and kills one! Vengeance has begun... In the Chaos turn there's not much to do, the squad of Berzerkers with the Lord that has been off to one side all game has finally reached the middle. They run to get into the Pond since it's potentially the last turn... I rolled just high enough to get one Berzerker into the Pond! ...and he failed his Dangerous Terrain test and died!! The Boys then inspired by the Berzerkers tries the same thing... one Boy reaches the pond... you guessed it. He dies as well!! Bloodthirsty ducks in ths pond apparently...

Does the game continue? Yes it does. Turn 7, the last one for sure coming up.

Both Dark Eldar and Iron Hands are basically out of the game at this point, neither can reach the middle any more. So the Berzerker squad that blew up the Land Raider now jumps into the pond to claim the objective... And one of the dies! Three out of four models that has entered the pond has simply died! The remaining Predator with the autocannon manages to shoot the last Lootas off the board. So all that remains at this point is for the larger squad of Berzerkers to try and do something useful. They charge the boys. The 'zerkers cleanse most of them and finally, finally the Lord gets to strike in close combat! I roll my +2D6A for my Daemon Weapon... and rolls a 1 and thus takes a wound and can't strike... D'oh. The Champion with his Power Fist kills the last boys though. The squad consolidates into the pond to rejoice in their victory... and two more guys dies to dangerous terrain... And that ends the game, with a Chaos victory! 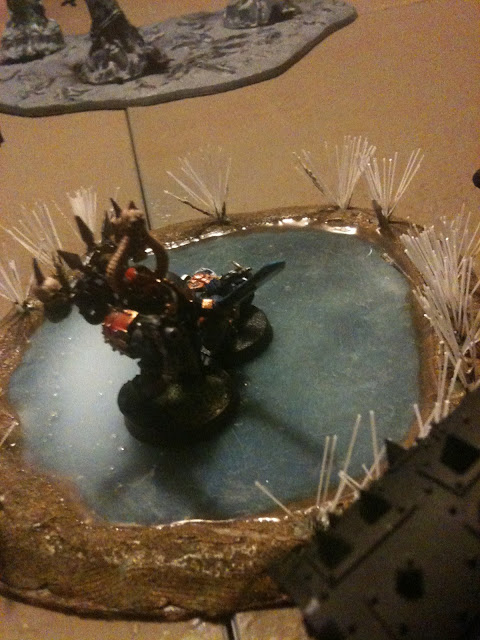 At the end of the game the Orks are completely wiped out, the Dark Eldar have three fleeing models and one locked in combat with two Terminators, the Iron Hands has those Terminators as well as a lone Marine and a Razorback left. Chaos has two immobilized Predators (one with out guns), one Skull Champion right on the objective and another five Berzerkers with the Lord (who cut himself) left. The name of the scenario is Carnage, and that's exactly what we got indeed!
Posted by Fagerlund at 10/16/2012 02:30:00 PM