So, time for revenge! Last time I played against Necrons with my Eldar I got my ass handed to me, so a new game this time! Unfortunately I haven't added anything to my Eldar collection since I've been slow with painting... but I put D-scythes on the Wraithguard at least! So since my friend had build a lot of new Necron stuff I had to fill out with Tau... basically not much thought here. I just took what I have...

On to the battle!

We rolled for mission, got Big Guns Never Tire with 4 objectives (really nice for me!) and Hammer and Anvil deployment (because of the points we used an almost square board anyway...). He won to chose sides, and to go first. He rolled Furious Charge in my deployment zone as Warlord trait, I got run 1" extra. My Farseer got Guide, Executioner and Doom. My Spiritseer got Destructor/Renewer and Empower/Enervate, and my Warlocks got Conceal/Reveal, Destructor/Renewer and Enhance/Drain.
There was Night Fighting turn 1, and I didn't steal initiative.

Not much happened here really, his Warriors and Immortals completely failed to move (I think they got like 3" in total with difficult terrain and run moves combined?). Both of his objectives turned out to be re-roll ones when shooting though. Scarabs moved up on one flank and the Wraiths took cover in a forest on the other. Annihilation barge moved up in range of the Broadside since that was the only thing threatening it on the board... and killed the Markerdrone but the rest was saved. The Tesla-arc also killed a nearby Fire Warrior.

Prescience on the Rangers, Doom on the Wraiths (which was denied) and Conceal on the Seer Ccouncil. The Wraithguard and Wraithlord moved up, followed by the Seer Council.
Shooting. Markerlights on the Scarabs gave me two markers, and the Rail rifles insta-killed one base. Then the Fire Warriors who had been stationary fired at the Scarabs, two shots each thanks to the Fireblade and the Markerlights removed their cover. Killed all but 3 bases. Yikes. The Broadside fired at the Annihilation Barge and blew it up for First Blood and 1VP for killing Heavy Support. Wraithlord missed all his shots... but the Rangers managed to put two wounds on the Wraiths and incredibly he rolled two ones killing one! Yay, they did something! The Wraithguard ran, again followed by the Seer Council. 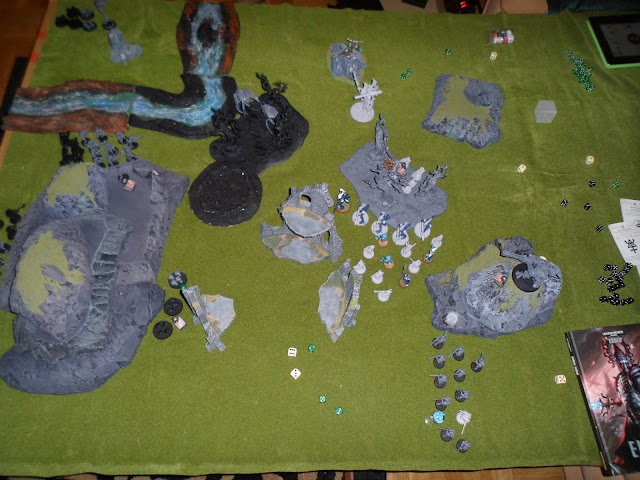 The Warriors and Immortals continued to be stuck behind the mountain pretty much, they were really lazy this game apparently. The Wraiths and Scarabs moved up to make their charges though. Scarabs tried to charge Pathfinders, but came out short despite Fleet. The Wraiths made their charge against the Rangers though, killing all but one who managed to escape.
The Immortals shot at the Wraithlord also, causing a wound. The Warriors also put one wound on the Wraithguard who I of course failed to save. 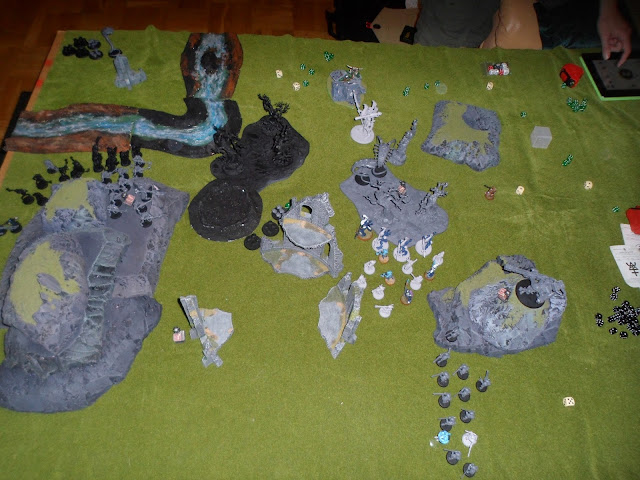 So, Guide on the Pathfinders since I planned to moved them, Conceal on the Seer Council and Doom on the Wraiths (which I forgot to use...) and Enervate on the Wraiths (which was denied). I also cast Renew twice on the Wraithlord, rolled 11 with the Spiritseer, but the Warlock passed his Ld7 fine and healed the Wraithlord back to full.
Movement, the Fire Warriors rolled a two on their Difficult Terrain (since one of them stood on the hill...) ruining my plan of trying to take the forward objective on his side. At least they were still out of Necron gun range. Pathfinders moved into the ruins, Wraithguard moved up to surround the Wraiths and the Wraithlord move up towards the Scarabs. Oh, the lone Ranger fled off the board.
Pathfinders put one Markerlight on the Warriors on the hill, the Fire Warriors with increased BS managed to kill three of them. The Broadside + the Wraithlord killed of the Scarabs, while the Wraithguard flamed the Wraiths to the Warp.
At this point I was in a very commanding position with one objective held by the Broadside (who was pretty much untouchable up on his hill with a objective halving the charge distance...) and two additional VP's. 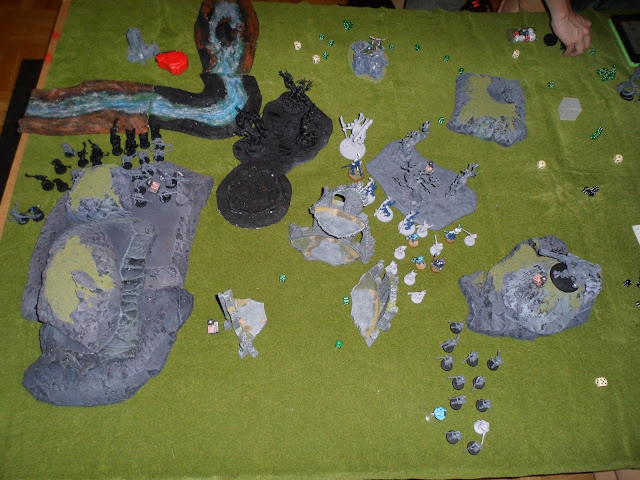 The Warriors and Immortals finally started to come into decent range, killed three Wraithguard (they managed 4 wounds in total I think...) with their Gauss weapons but failed to wound the Wraithlord. The other Warriors shot at the Pathfinders forcing them to Go to Ground and killed one of them. 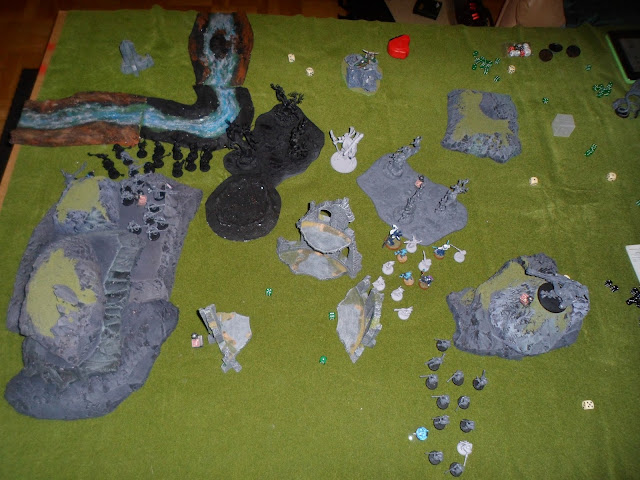 Guide on the Fire Warriors this time. The Spiritseer left the lone Wraithguard and joined the Seer Council instead, the Wraithguard moved into the Forest... which was a Razorwing nest. I knew this beforehand, but I figured T6 would be plenty. Four hits and a Rending later the Wraithguard was no more...
The Fire Warriors instead moved up towards that forest, thinking to claim my own objectives at least. Increased BS from Markerlights (despite the Pathfinders shooting Snap Shots!) and Guide plus the Broadside then killed 6 Warriors and the Necron Lord. Two of them got back up, but the Lord didn't. Woo! 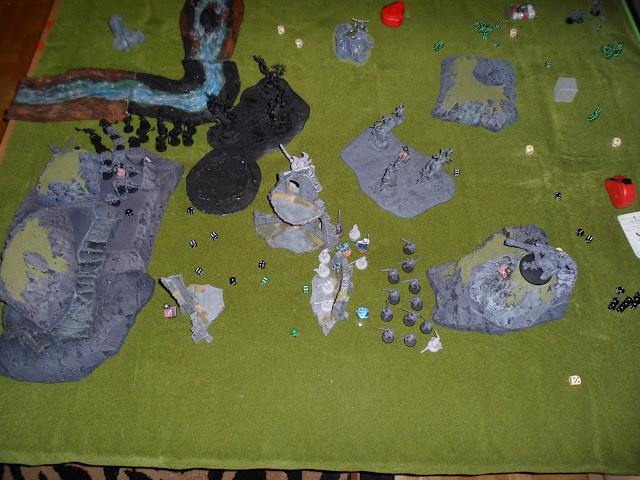 Immortals shot the Wraithlord to no effect, then tried to charge... and lost one guy to Overwatch flamers... Warriors shot everything at the Seer Council and killed the Spiritseer and one Warlock. 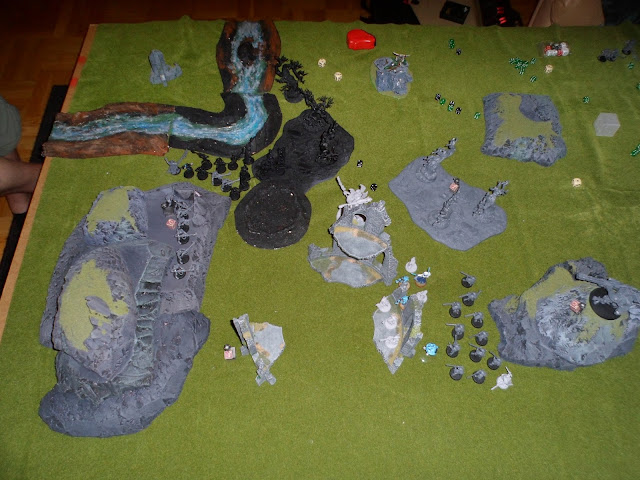 The Fire Warriors kept moving towards the Objective, and everything except the Broadside shot at the Warriors holding the Objective on the hill. Killed all but three, who fled denying my Wraithlord his glorious charge. The Broadside shot his Seeker missile and everything else at the Immortals who I had Doomed but once again forgot to use... and no Immortals died since I rolled a 1 with the to wound on the Seeker missile. 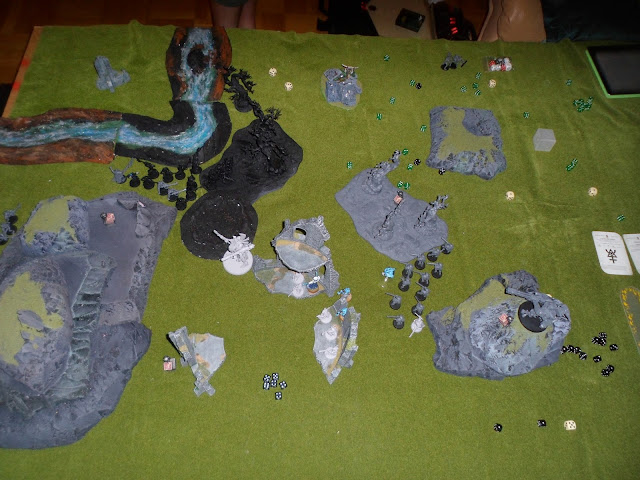 Warriors rallied, and ran up to grab their objective once again. The other Warriors were about one turn away from grabbing my objective in the forest by now... they shot at my Fire Warriors, killed just enough to cause a Ld-test... and despite the Fireblade being there they ran off the board. Bah. Can't trust them Tau apparently.
The Immortals and Overlord charged the Wraithlord. Ld10 isn't good enough vs Mind Shackle Scarabs, since he killed himself (once again...). 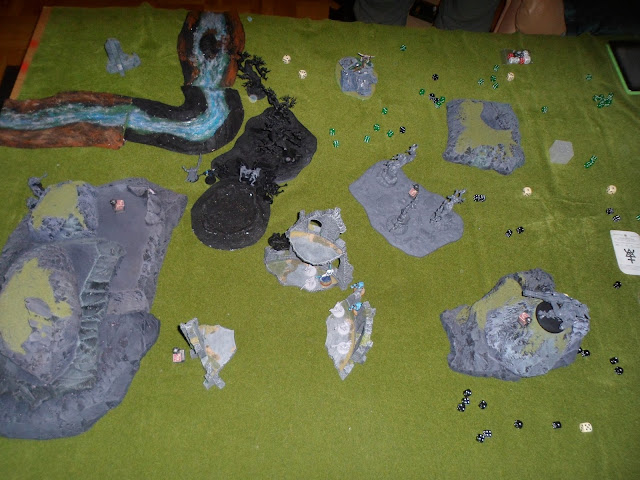 Seer Council moved up to use Destructor on the Immortals and killed one guy. Then charged in. A Warlock challenged the Overlord and passed Mind Shackle Scarabs (Ld7 is apparently plenty to pass where Ld10 isn't...). He was still cut down by the Warscythe though. One Immortal fell and didn't get back up making the fight a draw with one Warlock and the Farseer vs one Immortal and the Overlord.

We made a mistake here, thinking this was only turn 4, so forgot to roll for if the game ended or not. 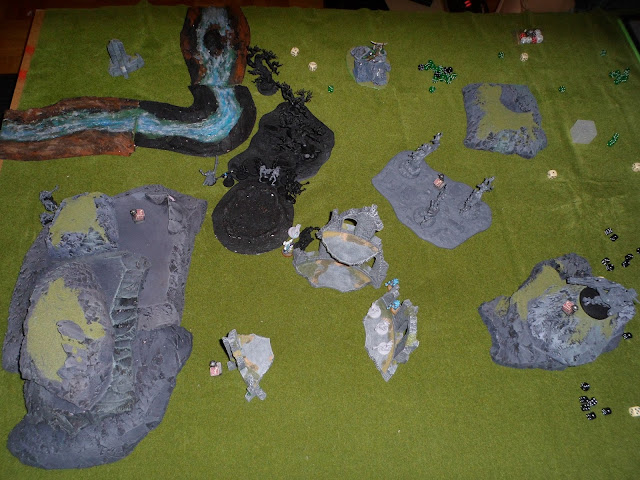 So the Warriors who had rallied finally managed to re-take their Objective and the other Warriors moved closer to my Objective while killing another Pathfinder. In the assault the Warlock was in base contact with the Overlord and failed his Ld and put a wound on the Farseer, he was then cut down by the Overlord. The Farseer was Fearless with his sword though, so he stayed.

The Broadside let loose on the Warriors coming closer and managed to kill just enough to cause a Ld-test which was failed on a double six, making sure they couldn't reach my Objective after all. In the assault my Farseer passed the Mind Shackle Scarab-test and survived the Warscythe.

Tau shooting is strong. The Eldar did their part and took care of the Necron stuff that came piecemeal and close, but it was definitely the first round of Tau shooting that won the game. It was also the Tau cowardice that was close to losing me the game as well...
What I learnt though was that Executioner is a really crappy power (I did use it I just forgot to write which turn above and it didn't do anything both times anyway so...). And I rolled it twice when choosing Powers... bah. Also, the Shard of Anaris... don't know if I would ever take this in a list where I'm not trying to get as many points as possible. No AP-value really hurts. Sure, Rending is nice... but you only get two attacks with a Farseer... so... Now, the Fearlessness was somewhat useful in this situation though. But it feels very situational.
This configuration of a Seer Council is really weird and hard to use in any way... I think I need to get a couple of more Warlocks if I'm going to run them on foot, and maybe then they'll be powerful enough to have a purpose. In this game I just ran them around, making sure the Farseer was where I needed him... I guess extra wounds for the Farseer isn't that bad... but then when I really needed them to do something they were too few in number. I still want to try a Seer Council on foot though, but I wonder how many more Warlocks I need...
Broadside... what a reliable unit. Even with just a single one he dominated the field. And in this mission he was just perfect as he could score at the same time! And with First Blood and one Heavy Support killed he actually claimed all of my VP's in the end...!
Wraithlord needs some kind of support though. Maybe another Wraithlord would be nice. As when he's all alone he gets really vulnerable to these nasty tricks like Mind Shackle Scarabs... Maybe some Scorpions or Banshees would complement him well though? We'll see what I come up with.
Posted by Fagerlund at 9/09/2013 04:49:00 PM