So we decided to motivate ourselves to paint more with a small escalation league, starting at 500 points painted models, then adding more for each week. So I basically took this as a good reason to paint my Daemons that have been lagging behind a bit... which means my choices are purely based on "this needs to be painted".

Not that amazing, huh?


So we rolled for mission, got Purge the Alien, Vanguard Strike deployment, he chose sides and he chose to go first. My Warlord got Hatred, rolled Dominate and Pavane of Slaanesh for powers, and got a 1 for Exalted Reward (for another roll that gave me the one that returns the unit if he dies + a Witstealer Sword). Daemonette champ got a Etherblade.
There was Night Fighting turn 1 and I didn't steal initiative.

Turn one wasn't very eventful on either side. He started by revealing the artefact in his deployment zone which gave all psykers D3 S4 hits... of course I took a wound from that. Other than that he killed one Plaguebearer.
I moved forwards, got both Dominate and Pavane off, neither did anything though. Warpstorm killed my Plaguebearer champion. I turbo-boosted the Screamers over the Boys and killed 4. 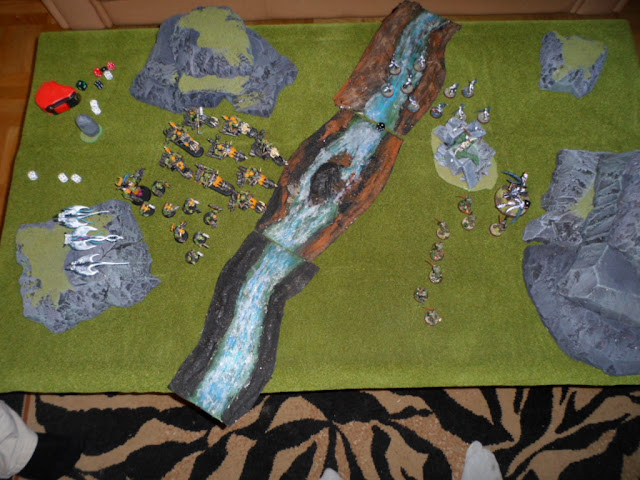 He turned his Boys around, combi-skorcha and sluggas killed one Screamer. Warbikers killed all but 2 of the Plaguebearers despite going to ground... then the Boys finished off the Screamers in the Assault in return for one boy. First blood!
I continued to move up and cross the river with the Daemonttes, Plaguebearers being stuck from Going to Ground. Warp storm was calm, I got Dominate off again, and the Pavane hit the Warbiker Nob, taking one wound off him (too bad it didn't hit a normal biker...). 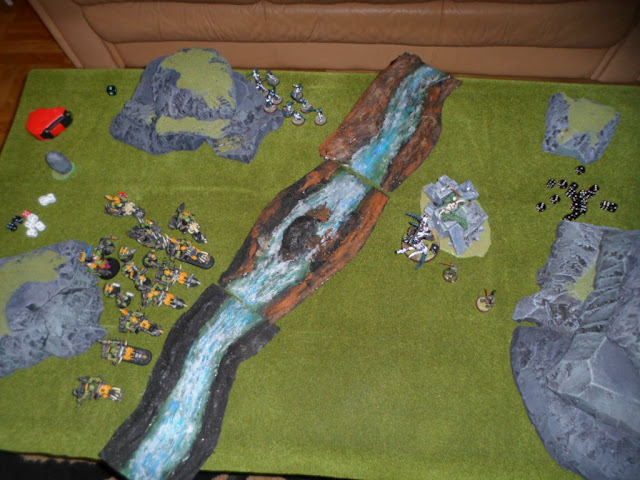 The Orks castled up, waiting for me to get closer. Warbiker shot at my Keeper, putting him at one wound left.
I move up to charge the Bikers with both Keeper and Daemonettes, get Dominate off again. Plaguebearers gets up too for a long charge. Warp storm... 3 again. Kills my Keeper... bah. It'll come back next turn though, but without the Keeper-support the Daemonettes doesn't stand much chance against the Bikers... but I charge them in anyway, because it's safe in assault than outside. He kills 4 on overwatch, then challenges my Allures, neither does anything to the other basically and we stay put. 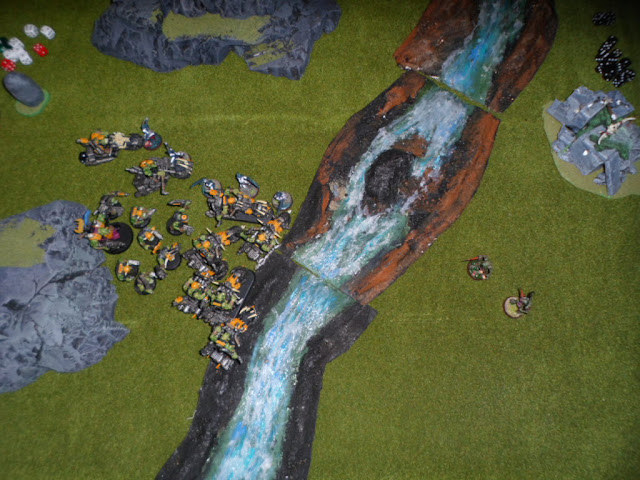 His Boys find a gap in the lines and manages to charge in to help the Bikers. I kill one biker, but the only thing that does is let more of the Boys get in to attack... he wipes my Daemonettes out easily.
My Keeper comes back, put both Dominate and Pavane on the Bikers. Pavane hits the Nob again, and he finally dances himself to death. Another biker dies as well. 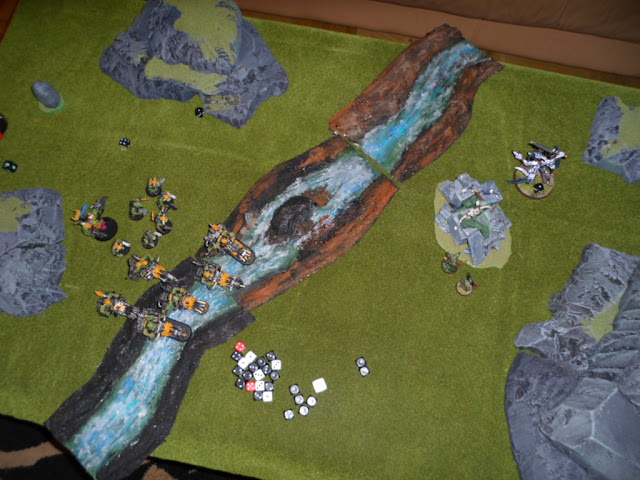 His Dominated bikers refuse to move for the first time of the game (finally that mob rule doesn't help them!). Warboss and squad crosses the river.
I charge the Boys with both Keeper and Plaguebearers... he challenges with nob which I kill easy. Plaguebearers actually kill 3 boys though despite all dying so I still win combat but he stays.
We forgot to roll for if it ended...

His non-dominated bikers gets around and charges the Keeper from behind... And kills me with Hammer of Wrath... but since the Keeper is still I10 I also get to attack and I kill the last boys for a KP at least.
He got First Blood, Linebreaker, Slay the Warlord and 4 KP, I got one KP, so 7-1 to the Orks!


Not much to say here, Warp Storm really screwed me over at a critical point of the game. I probably made a mistake with the Screamers though, running them off alone like that. I think I should've been a bit more defensive with them, only slashing if I could get to a safe spot after. Ah well! Other than that it was just a bad match up for my units, and well - the fact that the army isn't really planned shows through as well. Plaguebearers really stick out here - in Purge the Alien especially... they're too slow to keep up with the rest! And with no objective to camp... Ahwell. At least I got stuff painted! We'll see how many more games I'll manage to get in before next week where we're aiming for 600 points...

Oh, and scoreboard so far: 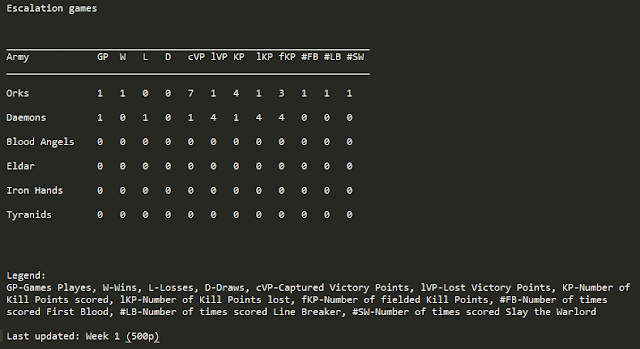