So I've slowly been adding some Dark Angels... and my plan was to not play them until I had actually painted them... but when I realized I could make a 1850p list I couldn't really resist. So my first opponent will be Orks! Yay!

So there's not terribly much thinking about this list, as it's basically what I have. Azrael makes pretty much the entire army scoring, he and the Librarian will join the Command Squad - which will be boosted by Prescience.

Azrael chooses his Warlord trait with no need to roll, and depending on the mission I'll go for the Feel No Pain within 3" of an objective (and move him into a scoring unit where he is needed) or The Hunt as Azrael should be quite good at killing whatever Ork is in lead. The other traits doesn't make much sense, as I'm not planning to charge much in this game and the only reserves I have come in automatically.

The Veterans in the Drop Pod will probably be Combat Squaded - having the two Combi-meltas (+melta bombs) and the Plasma gun in one squad and the flamer in the other. This way I can use both the Flamer and still be able to blow some vehicle up. And my thinking for putting them all in the Drop Pod is that they have 2A base so they shouldn't be push overs if they're counter-assaulted. This is also a reason why I might want to keep them in one squad for safety in numbers... I'll have to decide that after I see his list I suppose. But most likely they'll be two squads.

The Terminators will come in turn 2, either off the Bikers beacon or the Drop Pods beacon, depending on which one has the better position for them to cause as much havoc as possible.

And that's basically it. The Tacticals will Combat Squad unless we play Purge the Alien, with the Heavy Weapons-guys on the backfield objectives and the plasma guns and pistols covering the midfield.

Oh, and I built this list before I knew I was playing this game, so I just added Flakk Missiles as an afterthought. Then I got to play Orks, and I realized he might've finally built his Dakkajet, so those two Flakk Missiles might be very handy indeed!

So I randomized some terrain and we rolled for mission and deployment and got Emperor's Will (2 objectives) and Hammer and Anvil. I won to chose side, and chose the side with the river.
He won the roll off to go first, and decided to do so. For Warlordtraits he got an extra dice for run rolls, and I chose Feel no Pain when within 3" of objective, because I felt I wouldn't be able to catch up to a bike with Azrael... I got Prescience and Hallucination for my Librarian.
My Bikers scouted across the river, and my Scouts Infiltrated to up on a hill.
There was Night Fighting Turn 1, and I didn't steal initiative.

So everything started to move forward (one Stormboy died from his own rokkitpack), and his objective was revealed to be a Targeting Relay (not bad!). Trukks stopped to shoot at Ravenwing, but failed to do any damage. Some more scattered shots also failed to do anything, but Wazdakka killed 3 Scouts (including my Missile Launcher that was Precision sniped by Wazdakka) while the other bikers turbo-boosted, but the Scouts stayed put. 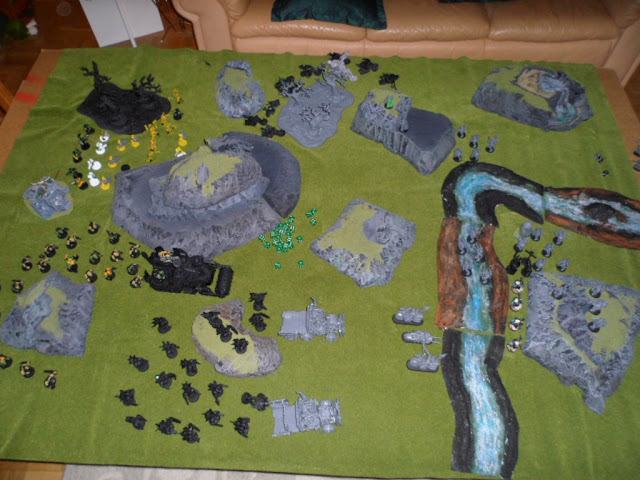 So my Drop Pod came in, and as stated in my intro the Deathwing stayed out. The Pod landed to the side of the Battlewagon, pretty much where I wanted it. The Melta-half of the Veterans jumped out close to the Battlewagon and the Flamers and Plasma on the other side. The river was revealed to be Hyperslme (which didn't worry me at all, with Ld10 and a re-roll on top of that), and my objective was sabotaged. Not much other movement really.
The Combi-meltas did their job, and one hit and exploded the Battlewagon, killing half of the Lootas on the inside as well. The Flamer four Stormboys, and the Plasma overheated and got killed... The Bikers that had scooted away some shot their plasma and bolters at the closest Trukk, getting one penetrating hit and one glance, but both went through and I got another explodes result, so the Trukk careened backwards and exploded a measily 1" which covered 1 boy that made his save. Only two boyz on the inside died. The Command Squad that was Prescienced shot at the other Trukk, making it explode on the spot and killing half the squad inside. The Scouts got one precision hit at Wazdakka, but failed to wound. 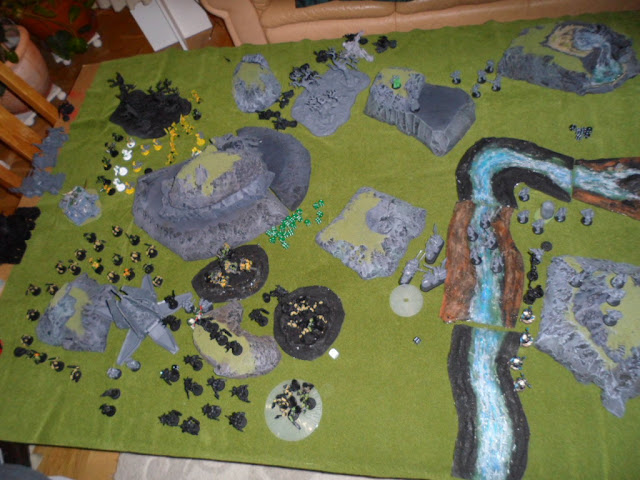 The Dakkajet came in. Bikers moved up towards the 5 Marines on this side of the board, shot 3 to death and then easily killed the other 2 in assault (despite me trying to be cheesy and survive through challenge). The Lootas killed off the remaining Scouts.
The Dakkajet only managed to kill two Marines (from the squad with the Flakk missiles) despite calling a Waaagh. The Waaagh at least helped the Boys to complete their charges. The two units of Trukk boys both tried to charge the Ravenwing, starting with the small squad that was furthest away trying to draw out my Overwatch, but I judged correctly that 9" was too far despite Fleet and managed to kill two boys from the other squad instead. In the combat the Orks killed 2 bikers, leaving only the Plasma gunner alive, but he used Hit&Run to get away from combat.
The Veterans with depleted combi-meltas was charged by the large unit of Boyz, and killed 4 Boys before they got to strike and in return only one Veteran died. The other half of the Veterans was charged by the Stormboyz, they failed their Overwatch, but killed one boy in combat - but more importantly the Sergeant killed the Nob in a Challenge before he got to hit back and in return the Stormboyz killed 2 Veterans. Extremely successful combat for me! 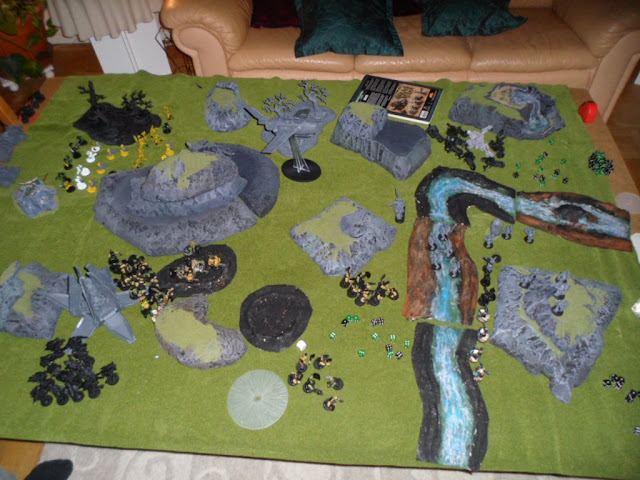 So the Deathwing Assault occurs, and both Deathwing squads manage to squeeze in between the cliffs and behind the Boyz within 6" of the Locator Beacon on the Drop Pod. Both squads shot at the Boyz holding their Objective, could only see 10 of them but with twin-linked shots for arriving they killed all they could see.
My Flakk Missile shot and hit the Dakkajet, and destroyed one of it's supa shootas. My Marines combined with the Command Squad finished off the Trukk Boys in one sweep (but the Sergeant in the Hyperslime river overheated his Plasma pistol and died in the process). The lone Biker killed a Loota.
The Stormboyz finished their Veterans, but one heroic Veteran in the other squad held the large squad of Boyz at bay (thanks to the Nob completely failing his attacks).

The Warbikers moved up next to the river, preparing to charge across. Wasdakka once again Precision shot the Missile Launcher in this squad as well! But they failed their charge, losing one bike in the process.
The Dakkajet killed one Marine on top of the hill, feeling safe since the Flakk missiles were all gone. The Lootas and their Mek shot at the lone biker, killing him but the Mek overheated his gun and died as well.
The Boys finally killed the last Veteran in combat and consolidated a bit. The Stormboyz jumped a whooping 18" towards the Command Squad, and killed one despite only being in range with 5 sluggas.

In my little corner everything shot at the Bikers since they were scoring and the Dakkajet would have to fly off the field anyway. I managed to kill a single biker. I also tried to cast Hallucination, but was denied by the Warboss.
The other side of the board the Deathwing reigned supreme however, one squad tried to move around the mountain to get at the Boyz behind, killing most of them (all they could see once again). The other squad shot at the other Boyz killing a few, and then declared a multi-charge at the Boys and Lootas. They lost one of their number, but killed enough Boys to make them flee, leaving 2 Lootas and around 8 Boyz alive.
My Objective exploded, but failed to kill anything. 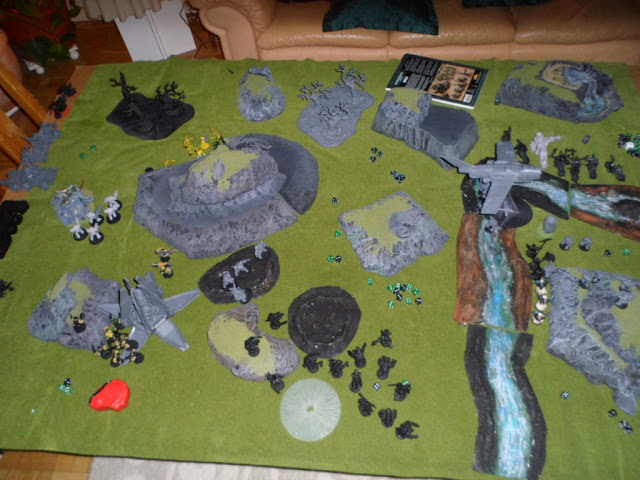 The Lootas kept running, but the Boys rallied (on a double one! Too bad it was the Lootas that needed it...). The Dakkajet left the airspace, and both the Warbikers and Stormboyz crossed the Hyperslime river without any problems (well, one biker died to Dangerous Terrain). In the Shooting Phase Wazdakka had obviously spent his aiming with all that Missile-sniping and rolled four ones... follwed by another four ones for the re-rolls. D'oh. His Warbikers killed the remaining Marines from the squad that used to have the Missile Launcher though. The Stormboyz charged the Command squad (that got three hits on Overwatch, despite missing Prescience this turn, and also one gets hot that killed a guy). Azrael killed 4 before they could react, and all the other Marines just flailed aimlessly while the Orks failed to penetrate armour - and as a result fled and was Swept.
The Boyz that was holding the Objective also charged the Terminators coming their way, and all died for the effort. 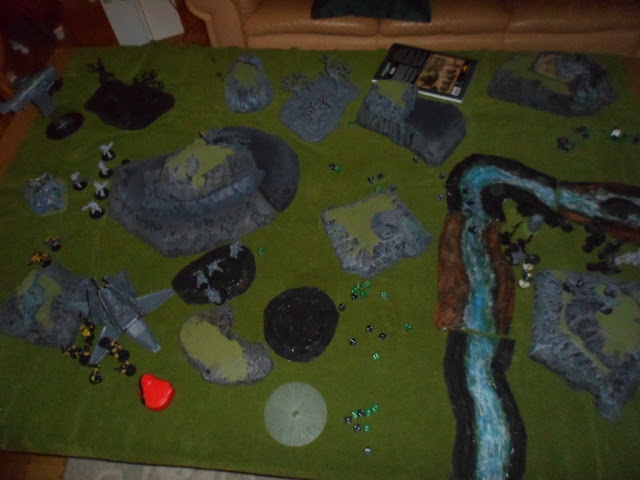 The Deathwing on the Orks Objective moved up to grab it, while still getting a good line of fire up, utilizing Split Fire to perfect effect, killing both the Lootas and the four Boyz they could see. The other Deathwing finished off the remaining Boyz.
The Marines combined with the Prescienced Command Squad killed all Warbikers except for Wazdakka, and with him the sole Ork left on the board he conceded.

I didn't really learn this lesson this game, but Drop Pods are awesome. My trap with two units that are pretty decent in close combat so you don't want to charge them, but if you don't they charge you really did their job at tying up and dividing the Ork-force. Those Veterans probably won me the game themselves!
I was helped immensely by the terrain and the deployment map however, with a semi-shooty fast list against me... and me being able to hide in a corner behind a river that was potentially dangerous for most of his fast stuff. And I also think he should've moved faster with the Trukks in turn one instead of stopping to shoot, so that helped me a bit.
I also learned that Combat Squads is a ridiculously good rule. Being able to feed a small unit like I did on the flank the bikers came up on to delay them while still having enough units to hold the objective worked out great. A single unit can only go through so many units in a game after all!
And then the Deathwing... wow, they're devastating on the turn they come in. Twin-linked Assault Cannons are awesome. I was worried by the amount of Boyz when I saw the list, but I managed to come in behind Terrain, and while one of the Boyz squads was locked in combat so that just worked out perfectly for me. They barely had to make any saves all game!
And then there's Azrael. His Ld10 across the board was really helpful (I would've failed quite a lot of Ld-test without that actually). Probably his most useful ability (except for making Deathwing and Ravenwing Troops of course). And he actually got a chance to dish it out in close combat as well, showing that he can do some damage there!
I really misplaced the Scouts however. I should've sat them in the forest instead, where they could've acted as another distraction for the Warbikers. Maybe they would've spend another turn before they got to my corner that way. But ohwell.
This deployment map really made my battleplan work out perfectly however. But I'll have to try again on a different deployment to see if it's still as solid! I felt the Dark Angels shooting is pretty powerful at least!