Two Objectives are placed just out of reach from deployment on both sides, two more central and the last one on a hill. No Nightfighting from start. Iron Hands stole Initiative!

Droppod turned up on the edge Combimelta+Melta squad jumps out and misses everything. Great start. The Objective nearby where they land turns out to be Sabotaged. Otherwise general movement forward by the Land Raider and the Vindicator to get in range with the big guns and reach closer towards objectives. Devastators nearby find the Objective to be Nothing of Note (damn, I wanted a Skyfire Nexus!). Everything else that tries to shoot misses this turn. Stealing the initiative didn't do much difference otherwise than moving forward first.

The Vindicator comes under heavy fire since the Guardsmen fears it more than anything else on the board. Two important hits, although when the to wound roll comes the dice shows snake-eyes.
The Manticore fired D3 shots.. of course turns up to be just 1 and the missile scatters off some 10''. The Leman Russ Commanders are shocked by the Iron Hands swift manouvers at the start of the battle and fails to hit anything with their big guns that scatter way off target. The poor Meltasquad remaining in the shadow of the Drop pod is erased from the board as the Imperial Guard scores their First Blood. No Unit secures the Grav wave Generator that ended up being left alone for the rest of the game. Another five Marines in different squads as well as two Missile Launchers are taken out by IG and due to miserable Armour Save rolls/well aimed shots.

No arrival of Reserves this turn. Things are looking rather dark as the Marines are slowly advancing towards objectives The one near their deployment turns out to be a Scatterfield. The Razorback in the middle let its troops out and then remains to provide them with cover. The Vindicator delivers immediately when it has come within range and blows up the Leman Russ on the flank. One Chimera is wrecked by Devastators on the Objective Hill.

This turn sees the arrival of the first Vendetta which directly takes aim at the Vindicator that  by a miracle survives THREE TL las cannon hits. A Chimera near the objective in the Guardsmen deployment zone find it to be a Scatterfield. The remaining Leman Russ takes aim on the Vindicator which by now had given up all hope, but although it is a hit the roll for penetration is a 2 (with 2 dice, taking the highest w Ordnance turning out to be a double 2). The Marines that seized the Objective close to their deployment zone is blasted away under heavy fire from an advancing Chimera. Some Plasma is fired from a Chimera towards the Storm Talon, but it gets hot and the Guardsman fail his save. The remaining tank crew now have a hot, smoking  pile of molten slag on the floor of their ride. A Multilaser salvo hits the Storm Talon but fails to do anything against its thick plating. 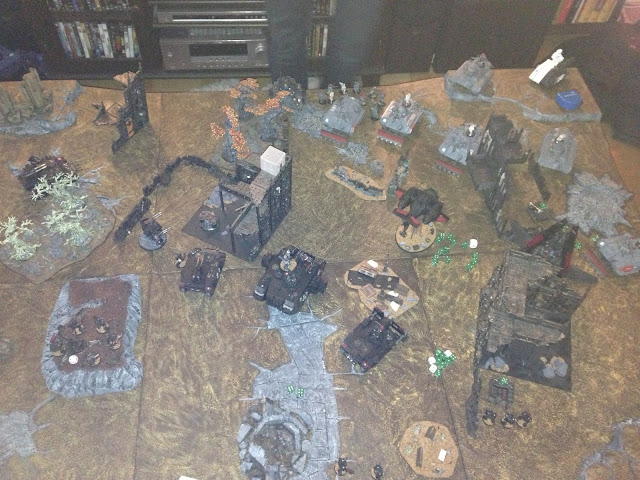 The Central Objective is seized by the Marines and turns out to be a Scatterfield (+1 cover). The Vindicator takes aim at the Leman Russ and causes a Weapon Destroyed. Although the Battle cannon is gone, this old tin jar still got three Heavy Bolters left. The Devastators takes out a Chimera with ease and EIGHT Guardsmen die in the following explosion. The Storm Talon reaches the Manticore and takes out two hull points with its TL Assult Cannon and Missiles. A lone Missile Marine tries to take down the Vendetta with a lucky snap shot but misses his target. The Terminators have leapt out of the Land Raider and try to charge a nearby unit but fail the charge due to Difficult terrain. The Land Raider takes aim at the Vendetta with its TL assault cannon and scores three hits! None manages to break through the hull though. 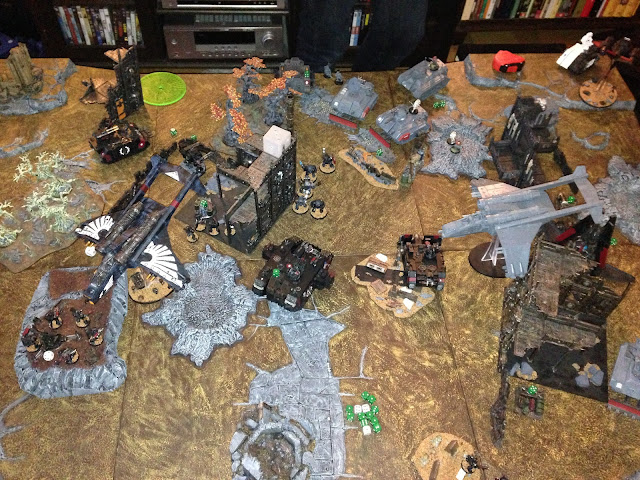 The Second Vendetta shows up soaring above the battlefield. This time there is no mercy for the Vindicator that suffer its deathblow by the vicious bird. The Manticore fire all its firepower at the Terminators that now stands in the open; the Librarian in the front manages to roll FOUR Look out Sir! and in the oncoming heavy fire from several IG units three brave Terminators perish. Some more Marines moving towards the objective near their deployment are again blasted from existence by Chimera fire. Three Devastators on the Objective Hill are taken out by the second Vendetta, while another Plasma gunner fires his gun which Gets hot! And of course he fails his save. 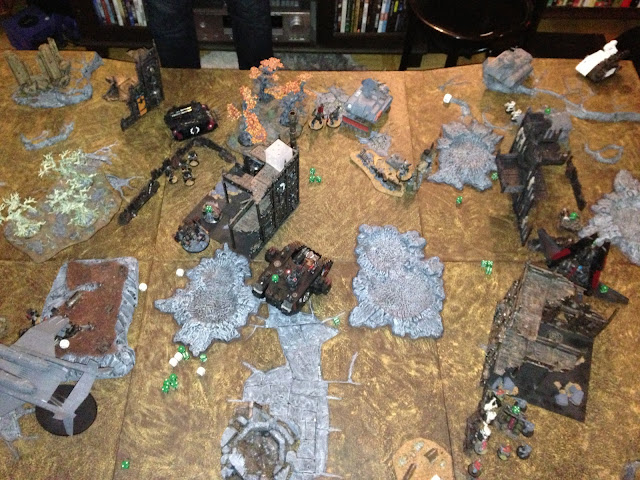 The Dreadnought that moved forward on the west flank to accompany some Marines towards the central objective in a ruin now turn around towards the Vendetta that just zapped some Devastators and turn the mighty TL autocannons towards the flying menace and hit with all firepower (6's w re-roll, but still!) and then roll a tripple six for penetration, causing and explosion in the sky. BOOM! The Razorback on the flank advances, lets out its Flamer-squad that makes their way towards the central objective which got their crew reduced. The last Guardsmen in between the remaining disabled Leman Russ and a Chimera is killed by the advancing Razorback with Heavy Bolters.
The Storm Talon went into Hover mode to avoid flying off the board and takes out the Manticore finally. The Librarian and the Terminators had moved forward and charge a poor Chimera which stood no chance to their wrath.

Comment: The Squad in the Chimera ended up in CC w the Terminators in the following turn, which was wrong. You live you learn. The big difference was that they would have got an round of shooting before getting charged. Statistically the result wouldn't have been much different.

The Guardsmen Command Squads issue the order for bringing down the Hovering Storm Talon, only to cause a Crash and Burn on its own Command Squad (not Warlord though). The Razorback in the middle are blasted away due to heavy fire towards its side armour. A plasma fired from inside one of the Chimeras... you guessed it. Gets hot! and the gunner fails his save.

No Nightfighting still. The twin suns of this planet shines vigilant causing the night to be a much shorter spanning period. The Two remaining Terminators go to finish the remaining Leman Russ off while the Librarian seizes the Objective near the IG deployment zone, although standing alone this might be a gamewinner with a big risk. The Dreadnought encouraged by the last lucky shots decide to take another pick on the remaining Vendetta, but this time only causing a penetration with no other effect than a hullpoint taken away.

The Librarian becomes the target for everyones attention and comes under heavy fire; 3 las guns, 7 Plasma rounds, 6 Heavy Bolters, 6 Multilaser actually hits but he manages with all his saves!! The Chimera troops are now seizing the Objective close to the Iron Hands deployment Zone.

The score is now 7(IH) towards 5 (IG) The game continues.

Still no Nightfighting. The heroic Dread takes away another hull point from the Vendetta and another Missile from a Marine close by the Hill Objective hits but the plane manages to Jinx although the missile was a pen... close call little bird! The Objective is still contested much to the anger of the Iron Hands marines who was looking for a solid victory. The Razorback fire at the remaining Command Squad but the Warlord remains as the lone survivor of the slaughter. The two Terminators regroup with the Librarian after having bashed the Leman Russ.

The Vendetta takes a chance and go down into Hover mode and fires three TL las cannons at the Librarian who deflects all three hits with his Storm Shield. The last Terminators are although killed by heavy fire and Plasma, saving their master who in the end remained by the Objective!!

Comment: The Chimeras nearby the Librarian could have tankshocked at this time, but my opponent forgot that. The game ends.