Time for another battle! Might be one of the very last games I get in with this Chaos codex, so lets see what we can bring. I went for a pretty solid all around list this time, to see if I could bring the pain. I also wanted to give the Decimator another chance, and this would be the first time I use him in my CSM army so perhaps he'll get better support this time around.

Everything in this army has a pretty defined role. Last time I played my harass Obliterator to great effect, so I thought why not drop two of them this time? Still keeping two deployed as well though to shoot at Razorbacks and/or Dreads and then I threw in a Predator that could support them with that.

A small squad of Marines to take any back objective (which starts in reserve to deny an easy First Blood), a larger squad including an icon (which might help the Deep Striking Obliterators depending on when they decide to show up). A squad of Plaguemarines to grab any midfield objectives and take incoming fire. All with plasmas of course, so they can bite back. Then a squad of Berzerkers in a Rhino to keep him occupied as far on his side as possible (might even be there for Linebreaker if they survive long enough).

Knowing there's always a possibility to face a Land Raider playing the Iron Hands I of course have to take my Chosen with Meltas who will Outflank. If they're lucky they'll get the Land Raider (if it shows up), otherwise they'll always catch something before they die as usual.

Finally we have the Decimator... what will I do with you? It has some really cute flamers, so I think I'll tag team him with the Daemon Prince (who is now finally a Flying Monstrous Creature according to the latest FAQ!). Together they should be able to spit out some Template Death, and hopefully be pretty durable.

First we rolled for mission and got Crusade and Vanguard Strike, we randomized some terrain, and the Iron Hands got to chose board edge first - I won the roll off for who went first though and took the first turn.

We rolled for Warlord Traits, I got Acute Senses for all my Outflanking units (not super useful but at least I had one unit that was Outflanking) and he got his Warlord as a Scoring Unit. He rolled for Psychic powers on Biomancy and got Smite and Iron Arm. We also rolled that Night Fighting was in effect from the beginning.

My deployment was pretty straight forward. I put the small squad in reserve, planning to grab the objective close to my board edge and then put Plaguemarines on the march towards the one opposite. Berzerkers were set up to drive for his far objective and cause some mayhem, while the rest was in the middle to drive towards his closer objective. I did put one squad of Obliterators in reserve as well as my Daemon Prince (didn't want him shot off in the first turn due to not flying). And of course the Chosen were Outflanking.

He did not steal initiative.

So I basically moved everything forward then tried to shoot at whatever presented itself. I missed with everything. I'm not even sure he had to roll any saves this turn...

First his Droppod with a Venerable Dreadnaught came in behind my squad of Marines. Then the shooting started. Due to Night Fighting I had 2+ cover on both my Decimator as well as Obliterators... of course I failed on both and one Obliterator went down to Instant Death while the Decimator lost a Hull Point. The Land Raider drove up and killed two Marines, and the Dread in the Drop pod caused a Pen on the Predator which fortunately was only a Shaken result. 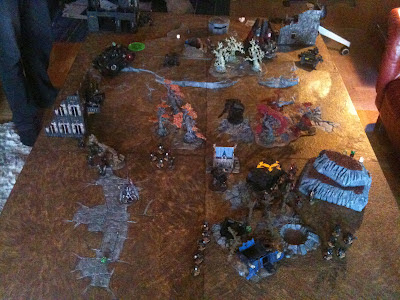 Night Fighting continued. So both my Daemon Prince, Obliterators and Chosen came in while my small squad of Marines stayed in reserve - perfect there at least! The Rhino drove forwards a bit and the Berzerkers came out.The Plaguemarines grabbed their intended Objective in the corner.


Then everything went on to keep missing... This included the Twin-Linked Meltas of three Obliterators, Twin-Linked Lascannon of the Predator, Butcher Cannon... Everything failed. Except for the Marine squad who got back armour on the Venerable Dreadnaught so of course Rapid Fired Bolters and Plasma into it, and luckily managed to blow it up. First Blood! Oh and the Daemon Prince used Winds of Chaos to fry two Devastators who actually fled since they lost their Sargent but stayed on the board.

The Storm Talon came in and fired it's Skyfire on the Daemon Prince, and assisted by both Devastator squads as well as a Tactical Squad with Bolters they managed to bring my Warlord down (but he almost survived actually!). Then the Decimator lost his Siege Claw to a Melta. The Land Raider shot at my Marines, and managed to kill both of my Plasma gunners...

His Terminators had jumped out of the Land Raider, the Librarian attempted Iron Arm but got Perils of the Warp. The unit went ahead and charged the Obliterators anyway, wiped them of course but took one guy in return. 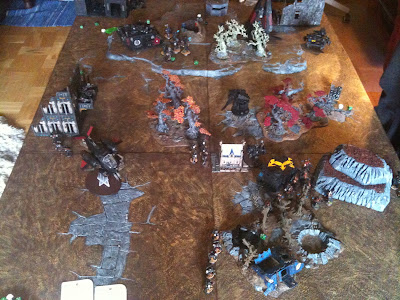 My small squad of Marines came on and moved straight for their objective. Got some scattered wounds from shooting here and there, nothing of note except for the Chosen who moved up and shot their Meltas at the Land Raider, was out of Melta-range though so only managed to inflict two glancing hits. The Berzerkers then charged the squad on the objective, slaughtered them but lost one guy to Overwatch.

The Land Raider and one squad of Marines shot at the Chosen, managed to kill three of them due to poor saves mostly... but they stayed in the fight. Then the Terminators assaulted my unit of Marines in the middle... The heroes actually killed one Terminator on Overwatch and then in some desperation I tried to challenge his Warlord expecting him to deny it but he chose to accept since he had his Storm Shield. Lucky for me! My Champion hit and wounded with both of his attacks and he failed one save! Slay the Warlord to me! He even survived the return blow! The rest of the unit was wiped off of course, but the Champion passed his Leadership no problem! Four Termiantors? No match for a rising Warlord like him! 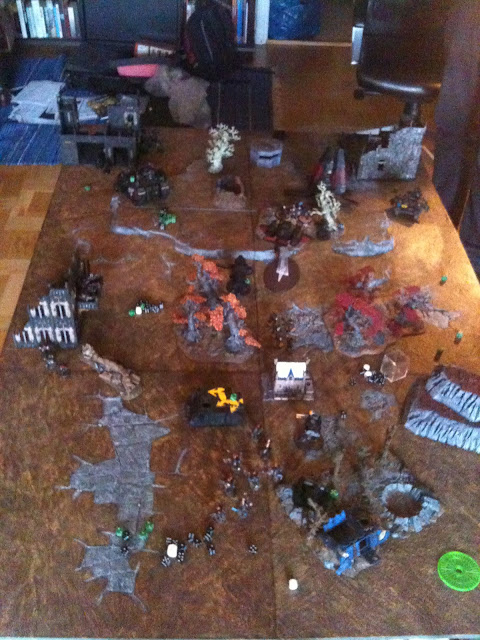 The remaining Obliterator who had tried his Plasma Cannon last turn (which scattered onto the Land Raider and did nothing) gave it another shot, and this time he fried 4 Tactical Marines in the middle - the thinking was to get rid of his Scoring Units. The Sargent passed his Leadership though. The same thinking went for the Predator who shot the unit coming closer and took them of the Linebreaker position actually. Then the two remaining Chosen wanted revenge against the Land Raider, caused one penetrating hit which exploded it. The explosion killed one of them in return though... the survivor stuck around though.


My Decimator who once again missed with his Butcher Cannon decided to try a ridiculous charge of 10" on the Tactical Squad holding the objective behind the building. And I made it with a roll of 11! He went on and kicked one guy to death, the remaining squad fled off the board due to Our Weapons Are Useless (he chose to do this so that he could fire his Devastators on the Decimator next turn). On the other objective on his side the Berzerkers charged the Dreadnaught, one died and then the Meltabombs only caused a Penetrating hit which immobilized it. Good for me! Meant they'd not be shot up next turn.


At this point I was considering converting my Aspiring Champion into a Lord for his great efforts so far... then he died to Lightning Claws so never mind that.

The Storm Talon flew over and managed to get an angle to shoot the Marines hiding in the Objective building (the Objective turned out to be +1 Cover Save by the way), I thought he would have to fly off the board... oh well, one dead Marine only, still had the objective. The Devastators who had nothing else to shoot at exploded the immobilized Rhino while the other squad missed the Decimator.


The Terminators continued their march, stepping over the lone Obliterator on their way. And in the combat between the Berzerkers and the Dread I actually only manage to inflict a Glance with meltabombs. Not too bad! Still protected from shooting by being locked in combat! 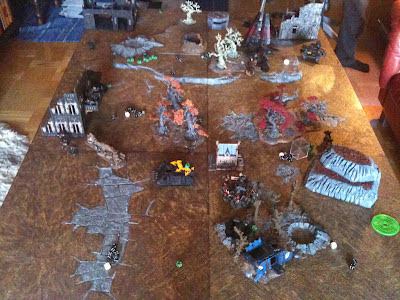 All my shooting missed once again. The Berzerkers failed as well. Still safe in Close Combat then!

The Storm Talon decided to gamble and enter Hover mode to get another shot at the squad hiding in the building... and it paid off as half died and the other half fled off the board. The Terminators in lack of better things to do crushed the Predator, but the explosion killed one of them in return. Then the Berzerkers finally managed to wreck the Dreadnaught and moved off to claim the objective as well as activating the Brainleaf forest in their next Shooting phase... however the game ended there!

So basically everything went according to my plan, despite rolling extremely poorly for three turns. I think the tables kind of turned when my hero Champion won his duel and the Decimator pulled off his incredible charge. At that point I felt pretty secure. That combined with that the Berzerkers and Plaguemarines did their job perfectly finally won me the game. Also my small squad that arrived from reserve did their job... but not much to do about the Storm Talon. My plan was basically to ignore it anyway since it's only one unit and the only thing I had in my list that could possibly deal with it was my Daemon Prince doing Vector Strikes... and he died in turn two...


Other than that I still think the Decimator is ridiculously overpriced, it simply does nothing worthy of those points. Okay, so this game I was lucky and it added a little bit to the win... but BS3 is really annoying on a 200+ point model that's supposed to be pretty shooty... Such a shame on such a nice looking model!


Crushing Troops however is ever so effective. I tried to kill them off as much as I could, and was helped by the fact that he made a list with few troops this time. This really hampered his chances to compete on the objectives. By the end of the game we had roughly the same amount of models on the board, but he only had 4 Scoring models left!