So this time I have a guest on the blog, all though you've seen his Iron Hands before. This is his latest game versus the Imperial Guard! 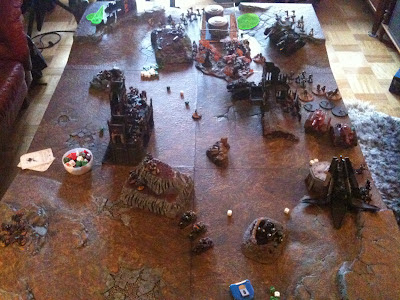 IG did not steal initiative. 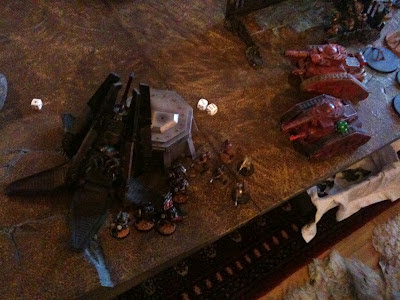 Drop pod arrival with a Meltaheavy squad that leaps out and fires. Combimelta causes a crew shaken, one hull point on the Leman Russ OLINDA. vindicator takes out two Heavy weapon squads and three troops (one Plasma gone).

General movement forward towards the Objective, in cover of buildings with Iron hand troops. 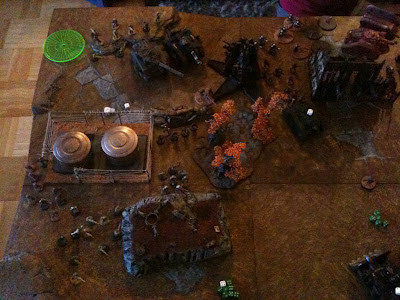 Demolisher moves forward in middle, a Squad behind. Leman russ squad on left flank focus on Drop pods troops, supported by flamer squad. Carnivorous jungle detected, run move with command platoon in Imperial Sanctum. The door of the Sanctum is shut and no-one can target them.

First blood IG, special weapons squad turns their aim against the Meltasquad that is erased. 12 wounds, four without saves -_-

Demolisher fires at the Vindicator, one hullpoint gone, crew shaken. Flamer marine nearby dies from shrapnel. Rest of the squad dead from massive fire from the Leman Russ squadron.

One marine dead in the missile squad from a Guardsmen grenade launcher team.

By the first rays of the sun over the planet comes the arrival of the second Drop pod, with a misplaced Plasma-geared Squad that fails to penetrate the armour of the mighty Leman Russ squadron.

Drop pod kills two guardsmen with its Storm bolter. The bolter marines in bunker ruin kills one guardsmen. Vindicator hits eight guardsmen near the forest - makes seven (!) saves due to have gone to ground. One more bites the grass from the Storm bolter. Devastators hits but fail to wound the Demolisher. Two missiles misses, but the Devastators rips away two hullpoints from the Demolisher. The Sniper Scouts, hiding out in a sandbag emplacement kill one member of the command squad. The bikers burst forward hitting with two melta causing two glancing on The Olinda Leman Russ, that without no hullpoints left came out wrecked! Storm bolter on drop pod misses its target being special weapon team.

Missile marines in bunker ruin was massacred by Guardsmen advancing on the right flank. A demolisher shot scatters into ruin killing the Devastator sergeant. The autocannon team fails to wound Vindicator.

IG decided to have a barbecue on the drop pod plasma turning three flamers in their direction, killing two. The group is then under heavy fire by guardsmen, but either guards or las gun cause any wounds, leaving one remaining marine to a final brave stand. 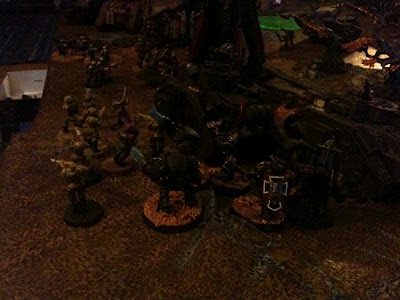 The Iron Hands moved in on the relic and claimed the Objective. All reserves arrive. The storm Talon moving towards the left flank and the Terminators arrive next to the Drop pod, behind enemy lines in a good position to threat the Leman Russ squadron from behind.

Demolisher is finally wrecked. A great number of Guardsmen is erased on left flank by the Vindicator and Devastators in building. Melta biker fires his melta, causing one HP on the LINDA LR tank.

The Sniper Scouts kills a Command Platoon member, the three remaining flees. Storm bolter from Drop pods fails to hit, and the lone Marine kills one flamer as revenge from his smoking battlebrothers. 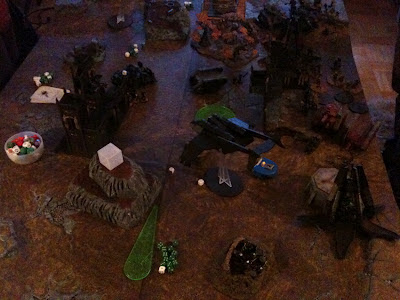 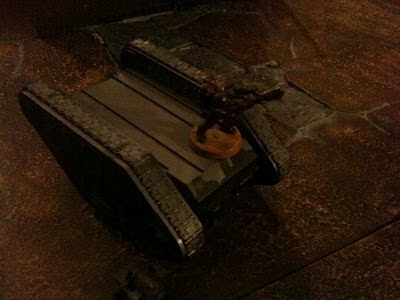 The third turn sees the arrival of the feared Vendetta gunship.

The Guardsmen are leaping over the Demolisher wreck and the Demolition Charge member dies from falling on his shoelace being impaled on a sharp edge of the vehicle. The death of a true hero! Advancement on the left flank by Guardsmen w Psyker. Remaining guards in middle advance towards the hill.

Tanks roll over barricade towards covering shades from the carnivorous forest without any Dangerous Terrain-effect.

The heavy weapon squad move out of the way from tanks, falling into a defensive retreat. A circular movevent by Guardsmen that stops the Terminators from reaching the tanks.

Shooting begins, fire from a special weapon team is upon the lone biker, but it misses. Lone marine under heavy fire. 8 hits, 4 wounds, fail to save two and falls to the ground without a head. Flames from the trooper upon the Demolisher wreck fail to wound. Defensive autocannon misses Terminators. Lone biker suffers overkill death by hits from both Laser cannon and Leman Russ LINDA's Battlecannon.

The Leman Russ squadron exterminates the objective-holding Squad. Vendetta fires on Storm talon, taking out one hull point. Guardsmen fail to hit the Storm talon despite eight shots from the Psyker. The Guardsmen in cover of Tanks run 3 inches. Mortar fire over Terminators, but it scatters and kill three of their own fellow warriors, causing the rest of the squad to run over the table edge. 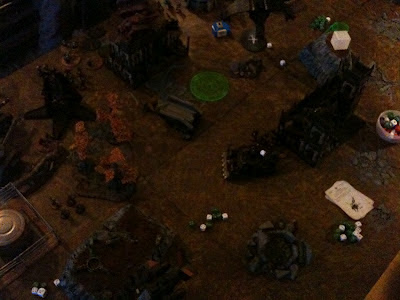 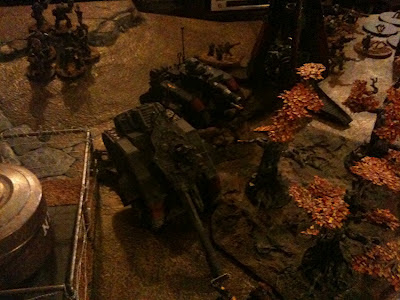 The Storm talon oves into hover mode and erase the Psyker Warlord and his squad. Stormbolter of Drop pod kills Guardsmen Special Weapons Team that runs off table after two failed morale checks. Scouts and Devastators try to bring down the Vendetta, but without success despite two snapfire hits. The Devastators in the building erase the Guardsmen by the hill with frag grenades despite going to ground-orders being issued.

The Librarian casts Haemmorage on a Flamer squad, burning one of them from existance, the witchfire did not bounce.

The terminators move in on the Leman Russ squadron, smashing one and leaving the other one with two hull points remaining. 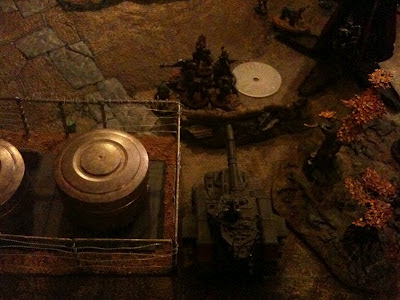 Vendetta closing in on the hovering Storm talon, Guardsmen troops advance from the other direction. Remaing Russes advancing respectively pivoting towards the Terminators. FRSR-fire order failing, no extra firepower against the Terminators from the Guardsmen in the back.

The platoon fires at the Librarian Warlord, but a brave LC-termies throws himself in the way to take the shot and saves his lord from almost certain death. Mortar teams keep laying fire upon the Terminators, although nothing goes through their armour. The lone flamer cause two wounds, but without any effect on the Terminator armour.

The vendetta brings down Storm talon, and two Guardsmen nearby die from the crash and burn of the wreck when the Storm talon hits the ground.

A run move on the left flank by the Guardsmen, and the Leman Russ on right flank fires at Vindicator but scatters seven inches that causes a in a raging explosion of fire under the Vendetta, that escapes unharmed soaring high above the battlefield. 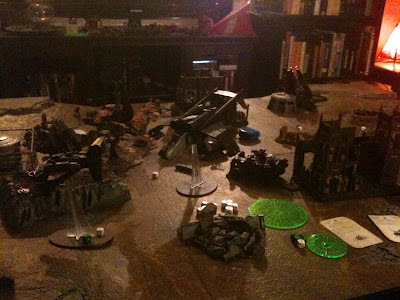 The vindicator faces the advancing Guardsmen troops on the flank, the Terminators advance upon the Leman Russ. The Librarian warlord leaves his group and faces the IG troops. The snipers takes out the lonely flamer troop that closed in on the Relic. The Vindicator fires, but scatters off target and its Storm bolter misses too. The Devastators on hill kill three guardsmen on the flank, causing the remaining ones to retreat. Devastators in the building hit the Battle tank LINDA with four missiles, but fail to do anything about its massive front armour.

The Terminators takes out the last Leman Russ from the squadron easily. The Librarian warlord get his eyesbrows burned off by Flamer Overwatch, suffering one wound, slaying the (f)lamer in return. Reforming four inches again with the Terminators. 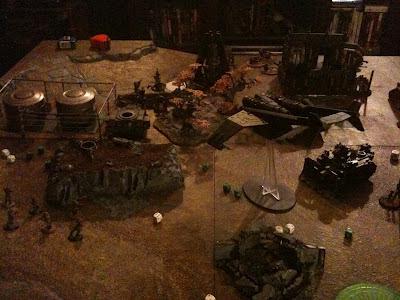 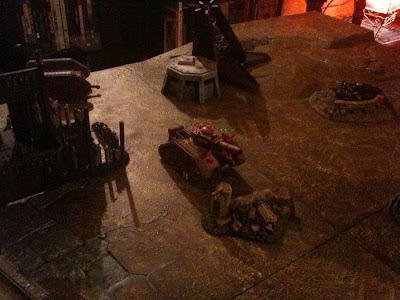 The Vendetta goes into hover mode and faces the Terminators that by now piss in their armour out of fear. The Mortar squads fail to do anything against the Terminators reliable armour and Stormshields. The Vendetta open fire with three twinlinked laser cannons and kills 2 termies. ZZAP! The Battle cannon of LINDA hit, but fail to wound the Terminators. 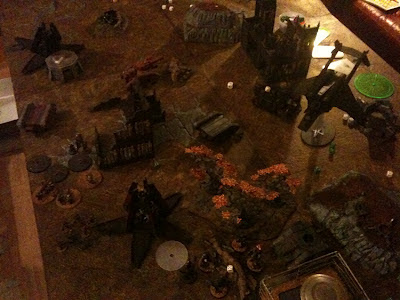