Back from vacation, and time for war! Friend of mine wanted to play some IG, and I decided to make a list to match his numbers basically... Cultists, Cultists and some more Cultists! I expect to be shot off the board by turn 2, but it'll be fun to see what happens at least.

So to lead my three squads of 20 Cultists each I have a Sorcerer in Terminator armour. He'll probably ride in a Rhino with five CSM and a melta gun. I have two of those squads. I think I'll roll two times on Telepathy and once on Pyromancy here. Hoping for Puppet Master and Invisibility, and then a destructive Pyromancy power just in case.

I also wanted to try the CSM Daemon Prince... as I actually don't think I've played with that version. So Wings, armour, Tzeentch, Level 3 and the Black Mace. He's rolling twice on Biomancy of course (and the obligatory one on Tzeentch). Fingers crossed for Iron Arm so that he actually survives...

Now, on to trying to outshoot the IG. 5 Havocs with Autocannons and 5 Havocs with a Lascannon and three missile launchers. And 3 Obliterators to round up. Some decent firepower. We'll see if it'll be enough...

Then for some fun I added Daemon allies. A Tzerald on level 3 to provide Prescience for either the Havocs or the squad of Horrors that joins him. The Horrors gets the Blasted Standard just because I want to try it, and also an instrument as well. The instrument is for dragging in the Screamers when they arrive from reserve, somewhere on the mid-field. I also gave the Herald the Portalglyph, so this army certainly doesn't lack scoring.

I know he has a Vendetta, and the only thing I have to deal with it is the Daemon Prince I guess. So that'll be dicey. I also feel like I'm a bit short on the anti-armour department... so... might be a tricky game this. But I'm hoping to get a mission with many objectives and have enough scoring units so that he can't finish them all off in time. We'll see how it goes.

I do like the story aspect of this army though, because in my mind it looks like a Sorcerer with his bodyguard of Marines has landed on a planet, started a cult, made a deal with a Daemon Prince of Tzeentch and recruited some Obliterators and now the Planetary Defence Force is trying to stop them...

We rolled for mission and got Purge the Alien and Dawn of War Deployment. So... no Portalglyph for me after all. :P Instead I got the one blast weapon. For Warlord traits I got Fear, he got Intimidating Presence. For powers, my Sorcerer got Fiery Form (4+ invul, +2S), Mental Fortitude (Fearless) and Hallucination. Daemon Prince got Endurance (Feel no Pain, It Will Not Die), Life Leech and Doombolt. Tzerald got Prescience, Foreboding (Yay, full Overwatch on a unit that can't shoot Overwatch! And I rolled it twice...) and Flickering Fire. Horrors got Flickering Fire as well.

I won to chose sides, took the one with most buildings to put Havocs in, he won to go first but let me go first. There was no Night Fighting for turn 1, and he didn't steal initiative. 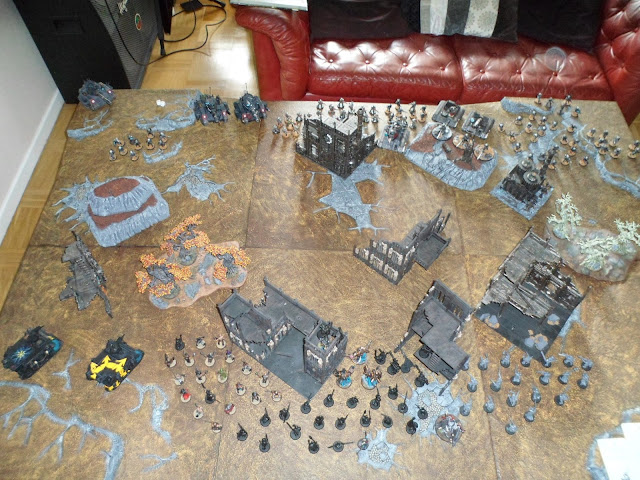 So I basically moved everything up except for Havocs who stayed in their buildings. He had placed his command Chimera where my Autocannon Havocs could see it through the windows... perfect target for them and I took two HP off it. I flew up with the Daemon Prince, planning to use Doombolt on the two Russes... but seeing the vulnerable Chimera I smelled First Blood and shot that one instead and blew it up. The explosion killed a couple of guys (but none from the inside weirdly enough). The other Havocs failed to do anything against the Russes, but the Oblits got a stunned result on one, so saving me from one Battlecannon at least.
The Cultists moved up into the woods, discovered it to be Ironbark (3+ cover) and were happy to stay there... 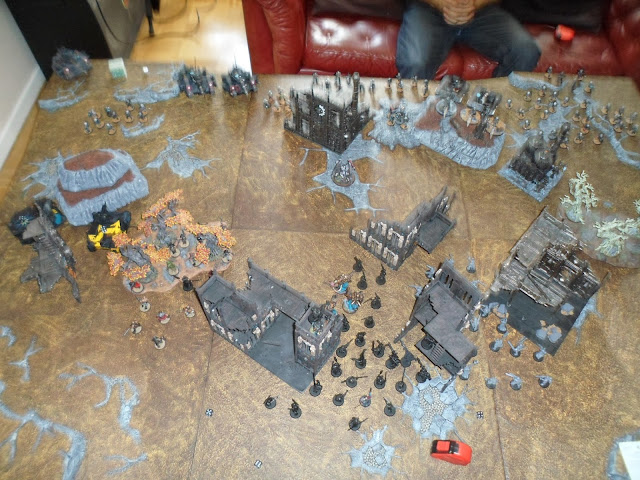 He stood back in the middle, while moving up on one flank. Basically all tanks missed their targets or I made my saves except one Basilisk that killed a couple of Cultists and a Autocannon Havoc. Pretty lucky turn for me. 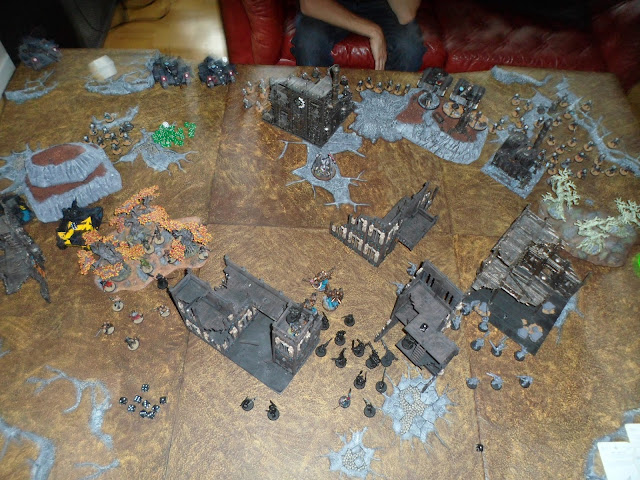 Horrors failed to come in. Screamers came in though. First things first. My Sorcerer got Hallucination off on the large blob of IG. Suddenly they saw traitors everywhere... and killed 12 guardsmen. Awesome. They didn't run off the board though.
Daemon Prince flew up behind the Russes, but despite backarmour, 2 S6 shots and 1 S8 shot only caused a single HP... Missile Havocs caused another glance.
Melta gun in the Rhino in front of the Vanquisher failed to penetrate despite two dice. Autocannon Havocs killed one IG Autocannon. Screamers turbo-boosted over Veterans and killed one. 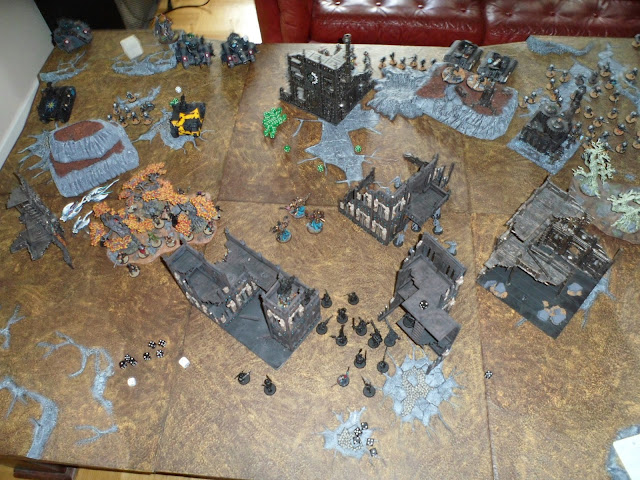 Sentinels didn't come in. His other large blob of IG discovered the other forest to be carnivorous. Basilisks both hit this turn and killed all but four Cultists in my back unit. They held their ground however. 2 Autocannon Havocs also died. The Cultists squad near his blob hiding behind the hungry jungle also took a couple of wounds, but nothing substantial.
Veterans managed to immobilise my Rhino with my Sorcerer in it, and the previously Hallucinated IG blog got ordered to Bring it Down on my Daemon Prince... and they actually caused a wound. I of course failed to stay in the air as well and took a wound from the impact. So... 2 wounds from S3 guns basically, out of like 10 shots. 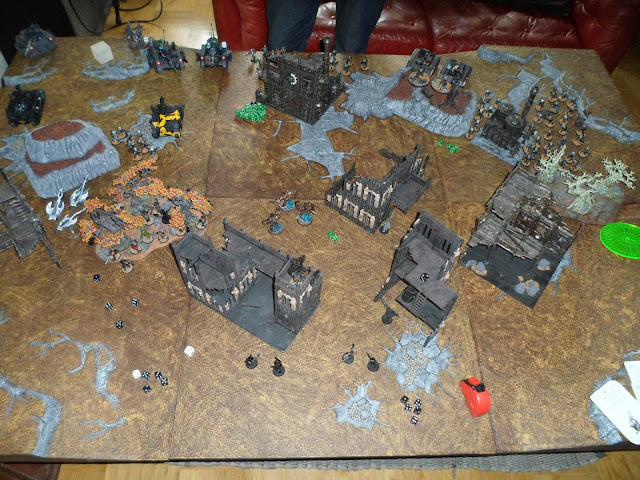 Horrors come in and they Deep Strike in front of the unharmed blob on one flank. My Warlord jumps out of his Rhino and joins the Obliterators for protection. Casts Hallucination on Straken but is denied. The Marine Squad stays inside however, and shoots and blows up the closest Leman Russ. The other Melta squad once again fails to penetrate the Vanquisher (rolled 13 both times!).
The Daemon Prince uses Life Leech on the decimated IG-blob, regains one W and then charges in kills them all. And by being close enough to Strakens CCS actually kills two guys from the Black Mace Curse.
Cultists that had been hanging out in the Ironbark moves out and charges the Veterans. My Champion challenges as he must, gets chopped down... and do not kill him in return. Despite having 4 attacks against 1... The rest of the Cultists kill the remaining Veterans however and run the Sergeant down afterwards.
The Tzerald shoots Flickering Fire on Level 3 (since he wasn't able to use any of his Blessings) and gets 12 shots off (boo!) but kills 9 IG, and then Warpflame kills another. The Horrors are denied however, and sadly I used my Blasted Banner there... so... waste of points in the end. 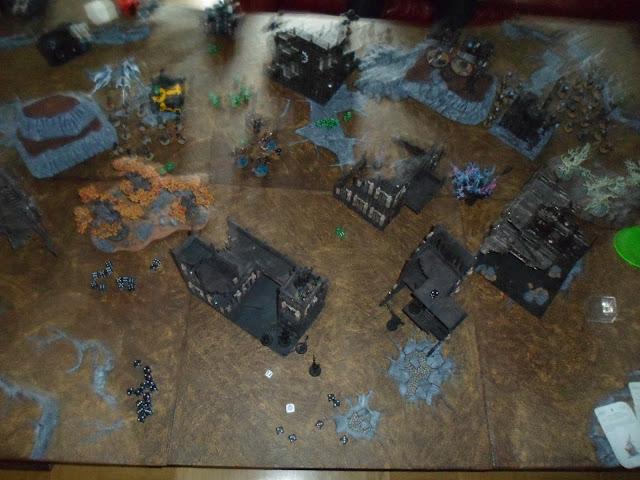 Sentinels come in, one the side with Rhinos just where he wants them. Shoots back armour... and only stuns it. The remaining Leman Russ moves forward and shoots his Battle Cannon in the face of my Sorcerer... I fail the LOS roll... but pass the save.
Veterans move up next to the IG blob in the Carnivorous jungle and shots some Cultists, with some help from the Basilisks that unit is wiped out. First kill point for the IG!
Straken feels brave and alone he charges my Daemon Prince. He died. 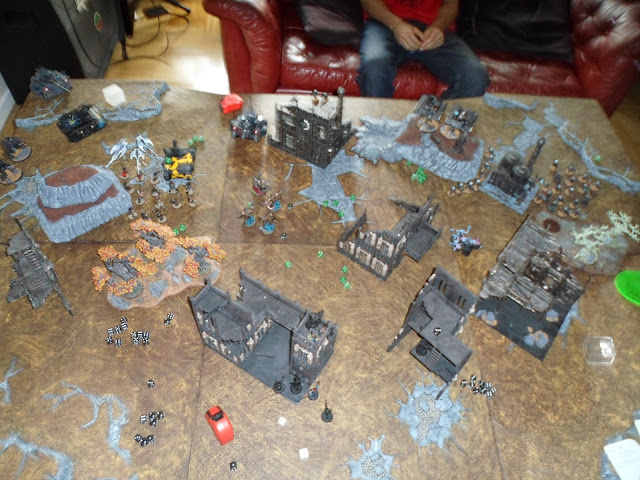 My Sorcerer leaves the Obliterators, and remembering I get +2S from Fiery Form I reckon I can take the last Hull Point off the Leman Russ and moves up to charge it. Explodes it as well. And of course I take a wound from the explosion and fail my 2+ armour save... Hah.
The melta in the Rhino shoots the Vanquisher once again, but forced to snap shots they miss. Screamers look on in dismay, move up and charge it and explodes it despite only getting a single hit in. That's how you do it. Obliterators can only see one Sentinel, so they wreck it easily. Missile Havocs starts shooting Frag Missiles at the large remaining IG blob, and kills 9 of them (Lascannon failed to do anything again). Soul Blaze stops on that squad. The Tzerald, thanks to Prescience and Level 2 Flickering Fire kills 8 Veterans. The remaining two are killed by the Horrors.
The Daemon Prince gets Doombolt off on both Basilisks (Beam! <3 ), only causes a Weapon Destroyed (Heavy Bolter) on the first one though and fails to hurt the second. He then charges in and kills the wounded one. It Will Not Die made him regain one wound. 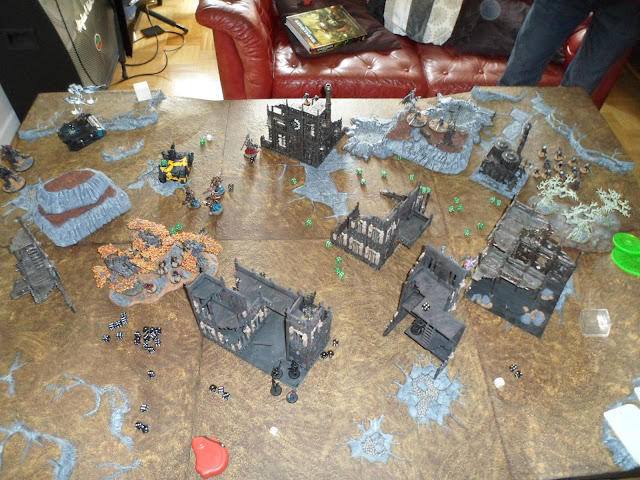 The remaining Sentinel manages to wreck the Rhino at last. Basilisk kills a lot of Horrors, and First Rank Fire! Second Rank Fire! Makes sure there is only 1 Horror and the Tzerald left.

At this point I just mop up, my Sorcerer gets to kill two IG, DP kills Autocannons, Melta on Sentinel, don't remember what killed the last Basilisk. Only a single Guardsman remains afterwards, and that thanks to denying both the Tzerald and the Horrors Flickering Fire...

Last Guardsman tries to kill the last Horror, but misses. The game ends.

So, that was kind of unexpected. I'm thankful I didn't have to face any fliers, but looking at all those Large Blasts I thought I'd be a lot more decimated after the first turn. Especially since we ended up rolling Purge the Alien. Luckily for me he had some major troubles finishing off my squads though, so I could hide them away and save some Killpoints that way. The 20 man units really worked in my favour here. Especially getting a 3+ cover forest to hide in was neat...
Other than that I had some awesome luck with Psychic Powers really... Hallucination killing 12 guys, Flickering Fire killing 9 and 8... ouch. Decimating the squads they were looking at really. Then the Daemon Prince was basically unthreatened for the whole game. Perhaps the Vanquisher had been scary, but it was busy trying to kill a single Rhino all game. So the Prince could just reign supreme and pick his targets at his leisure. Just like it should be.
Cultists showed that they can actually do something if you're lucky. Killing 9 Veterans isn't too shabby really. Other than that they just kind of protected my other units by drawing fire and having so many bodies they just didn't run out...
Havocs were so bad this came. My Lascannon killed a single guardsman in the end. Yay. The missiles redeemed themselves after the Leman Russes were gone and killed some 20 guardsmen which was nice... and the Autocannons had about one target on the field, and they would've killed it if not for cover saves. They really had a bad day... but I always seem to have bad days with Havocs...
Obliterators didn't do nearly as much as I'm used to see. But they were still there being a constant threat and soaking up some high damage shots that would've done more damage elsewhere... simply because he couldn't really let them just walk up the board uncontested.
Screamers proved once again, that a squad of three can be really useful. Low threat unit, but still enough to get stuff done. I really like them. Just don't expect so much from them, and try to grab the opportunities as they come and I think you'll be pleasantly surprised by them.
I still don't like Horrors. They're too easy to deny. Even against Guardsmen which is a good target for them they didn't do much due to Deny the Witch. The Herald was lucky though, and he paid for himself for sure.
Pretty odd outcome I think, the game didn't turn out at all like I expected. But a fun one! And I guess my dice took the vacation as a chance to charge up a bit...
Posted by Fagerlund at 8/02/2013 02:46:00 PM