So, an idea hit me a while back. My friend who plays Iron Hands obviously likes Dreadnoughts. I can also field a lot of Walkers, and add Monstrous Creatures to make up the numbers. Clash of Titans? Yes, had to be done. My list is basically all the big guys I could squeeze in. Bare minimum of Troops... hopefully we'll not play objectives...

So, first of all my opponent messed up in his list building somehow and brought some 170 points too little, but luckily for him I have some Dark Angels available and got the codex yesterday so allies it is...
We rolled for mission, and got The Relic as well as Dawn of War Deployment. I got Eternal Hatred for Warlord trait, he got Feel no Pain when within 3" of objective (hahaha, big chance of that ever happening to the Master of the Forge...). For Powers I got Symphony of Pain as well as Iron Arm, he took Prescience. My Gift of Chaos turned out to be an Unworthy Offering.
He won roll off for both table halves as well as to go first, but decided to let me deploy first. Night fighting for turn 1 was enabled. Then he stole the initiative. Bastard. 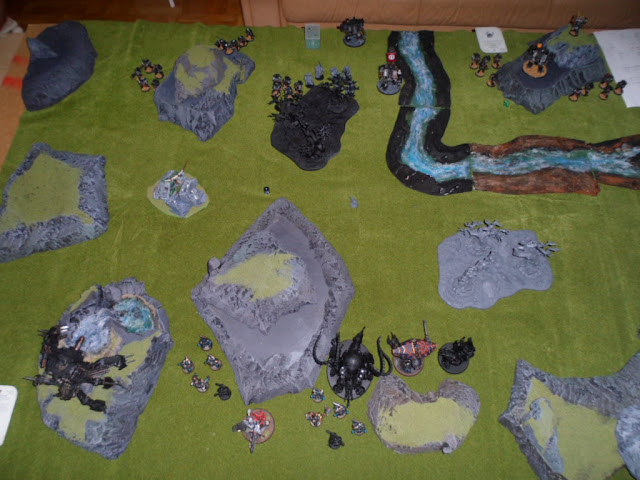 First turn two Drop Pods arrive, one Ironclad and a Combat squaded unit of Tacticals with Melta and Combi-Melta. Drop Pods always lands where you want them, so he landed in front of my walker-line as well as in front of the Defiler. Blew up the Maulerfiend. Blew up the Defiler. Ouch.
The other half of the Combat squad was hanging out close to the Relic. The Librarian cast Prescience on his unit and the Plasma Cannon shot at the Chaos Marines that had been hiding behind the Maulerfiend and wounded all five, but thanks to Nightfighting only two died (one thanks to Preferred Enemy).
One Dread also scored a penetrating hit on the Helbrute but it was only Shaken, while the Master of the Forge hit the Decimator but failed to do anything. 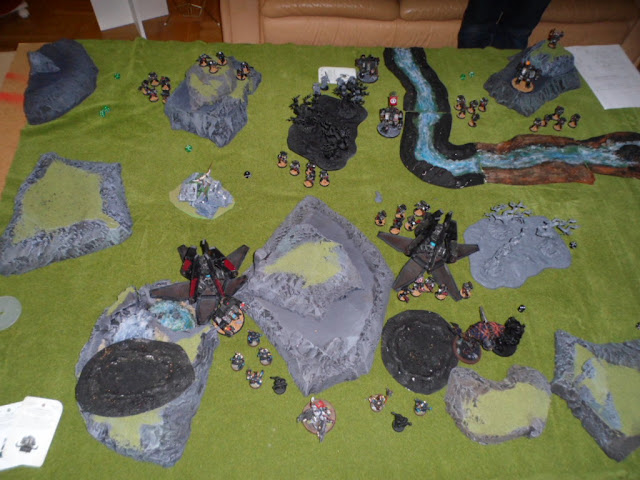 My preferred wave of Keeper of Secrets and Daemon Prince came in. Both on the left side towards the middle, to try and clean out the Troops in the middle.
The Keeper used Pavane on one of the Marine units to line them up for the Daemon Prince to Breath of Chaos at them, killing only two though. The Keeper killed one with his Demonic Gaze at least.
The Crazed Helbrute got Rage+Fleet for being hit last turn, and I decided to use him to blow up the Drop Pod. Shot his Melta and then finished it off in the Assault. The Decimator used his Heavy Flamer and Butcher cannon to kill two Marines, and the Chaos Marines killed another one which made them flee. The Decimator then caught up to them in the Assault and killed them however.
My Warlord Daemon Prince used Iron Arm to get +2S/T and used Symphony of Pain on the other five Marines from the Drop Pod just because he could. Then charged them, and thanks to Hatred (I rolled abysmally to hit) killed them all.
The other squad of Marines fired their Melta at the Ironclad but failed to penetrate. 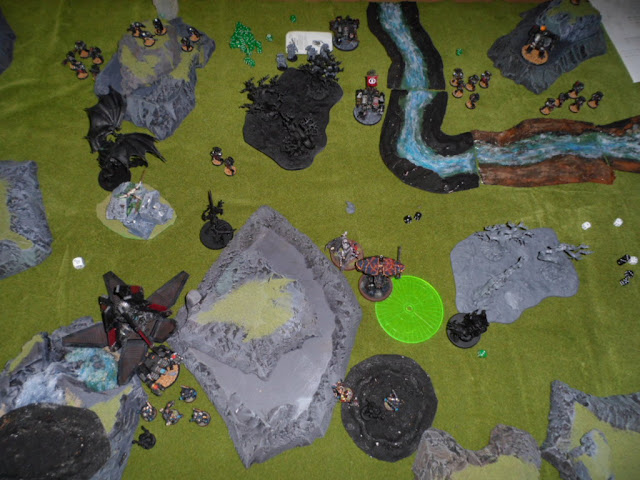 The other Drop Pod with the other Ironclad came in on my right side. The combined fire from Dreads and Tacticals brought down my Warlord as I literary couldn't make a single 3+ save despite not many shots actually wounding thanks to T7.
The Librarian guided the Plasma Cannon once again and shot the Chaos Marines again, killing another two (Preferred Enemy responsible for another one). But the Melta gun survived and stood his ground.
The newly arrived Ironclad shot the Helbrute in the back and caused another Shaken result. The other Ironclad shot his Melta and Storm Bolter at the Chaos Marines - killing two. They then failed their Leadership test and fled off the board. Cowards.
My flying Daemon Prince got to eat a lot of Rapid Fire Bolters and Snapfiring Rockets and took two wounds but stayed in the air. The Keeper also took one wound from Botlers. 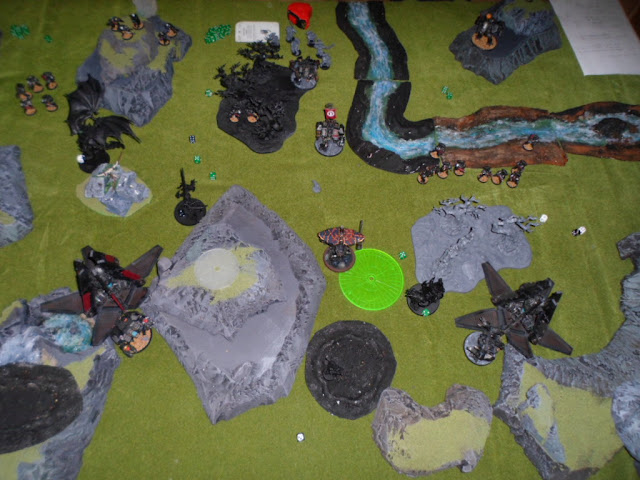 The Daemonettes came on. But the whole table was rather clustered so I couldn't find any good spot to land them in cover and still being close enough to the Relic to manage to somehow grab it in the very end. So instead I put them to one side, hoping they'd be forgotten and getting good run rolls.
The surviving Melta gunner teamed up with the Helbrute (that got Rage for being crazed and shook off the Shaken result this turn as well) and both fired their meltas both in the two-dice range at the Ironclad... and only caused a single glance. The Helbrute then charged in and managed to cause one penetrating hit, but only Shook it. Then died to the return-swing.
My flying Daemon Prince vector striked one Assault-dread and actually caused a glance, and then used Breath and Bolt on the Dark Angels... killing only one. I had set his course towards the Master of the Forge though, so next turn I might get at least one VP...
The Keeper of Secrets made the Venerable Dread dance closer to himself and then charged him, causing one HP lost on it and took no wounds in return.
The Decimator got close enough to some approaching Marines to use it's Heavy Flamer again, and with a stroke of luck hit and wounded with all four Butcher Cannon shots as well causing in total 8 wounds and all five Marines somehow died before I could charge them!

The Librarian guided the Plasma Cannon once again (not that it ever needed it) and he was determined to kill that one last Marine, and did so. Sadly I failed my cover save.
Running out of targets on the rest of the board, a lot of units shot at the Flying Daemon Prince and didn't do much - but the last Dread shooting actually hit and caused him to be Grounded - the impact took one wound off him.
One of the Dreads took a Hull Point of the Decimator.
The Keeper caused another Hull Point off the Venerable with nothing in return, and then used Hit&Run to get away towards the closest Troop-choice for my turn.
The rest of the army consolidated towards the Relic in the middle. 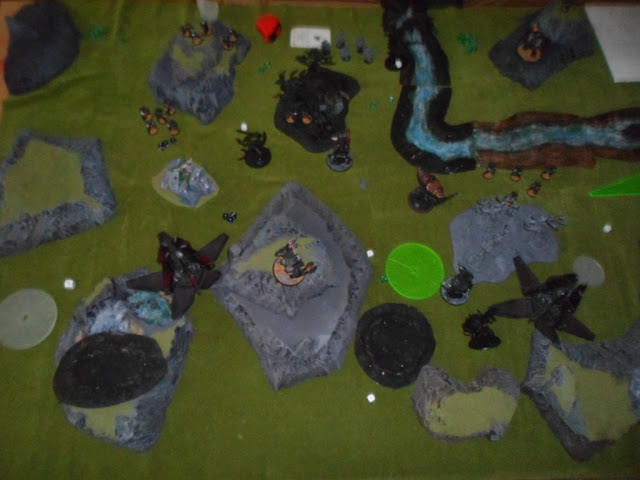 The Daemonettes rolled a 1 for their run move...
My Daemon Prince vector striked at the Dread in front of the Master of the Forge and failed to do anything despite four hits. But instead he got Bolt off and Insta-killed the Master of the Forge. Woo, I'm on the score board!
The Decimator continued his Kill-streak and flamed, shot and charged the five Marines behind the last squad he killed and killed all five there as well, before consolidating back towards the middle.
The Keeper used Dance and Pavane on the closest squad of Marines, glared one to death as they danced closer so he could charge them - where he decapitated all of them before they could blink. He then consolidated behind the hill.
The Decimator got his Hull Point back from It Will Not Die. 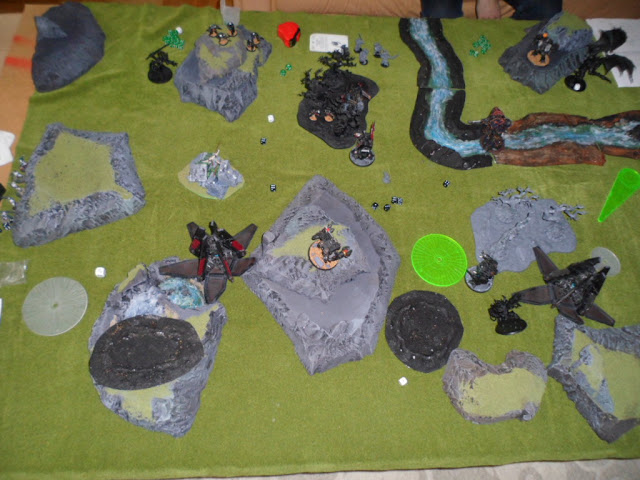 The Dread at the far back who had failed to protect the Master of the Forge decided that at least it could avenge him and actually managed to kill the flying Daemon Prince...
Another Rifle-Dread shot at the Decimator... in the front armour... and rolled three bloody sixes! At least the Daemon save saved one of them and the resulting penetrating hits only Immobilised it. One of the Ironclads who had shot his melta (but missed) also tried to charge but failed. The other Ironclad also moved closer.
The two man Marine-squad moved up and ran next to the Relic while the Dark Angels started moving through the forest.

The Daemonettes moved up into his Deployment Zone to secure Linebreaker at least as they were way too far away from the Relic.
The Keeper used Pavane on the two Marines next to the Relic and dragged them closer. Tried to charge, but 12" was slightly too long...
The Decimator shot the Venerable in the back and killed it. Fast turns with seven models on the board...

The Ironclads moved up super-close to the Decimator determined to not fail this time.

The two Marines grabbed the Relic and the Dark Angels moved up in support of them as well.

The Ironclads hit with their meltas... but the Decimator survived! So both Ironclads charged in... one of them barely made it! The Decimator then caused two penetrating hits, one for each Ironclad. I started rolling the results, first the one with only 1HP left - explodes! Then the other one... Weapon Destroyed. Aaaah, had I got those results in the other order and also survived the close combat the Decimator could've shot the Marines grabbing the Relic next turn! But alas it was not to be, and it didn't survive anyway.

The Keeper was also gunned down by a Rifle-Dread.

5 Daemonettes on the table, but as the Decimator didn't explode it had a slim chance of standing back up again and perhaps killing the Marines holding the Relic and thus forcing a draw... I rolled the dice, needing a 6... and five pips showed up. Ohwell!

We rolled to see if the game ended, and it didn't - but I decided that since he would be able to run away with the Relic at this time and possibly even getting Linebreaker of his own I conceded. Good game!

Well, it was obviously a pretty wacky game with such lists but I still learnt a thing or two. I made a huge mistake with my Warlord. Really wanting to try the Black Mace I got tunnelvision meaning I only thought about killing infantry with him. Instead I should've used him in turn one to charge the Ironclad when the melta failed. With Iron Arm I was safe from retaliation even should I fail to Smash him to death. Instead I put him in the middle of the board where his whole army could shoot him... okay, I made some horrible saves, but still. And considering how detrimental that Ironclad was in the end...
And then there's those damn Drop Pods. My opponent is usually pretty damn unlucky with those, and fails to do much once he comes out. But in this game they did exactly what they were supposed to, and due to my lack of Troops I couldn't bubblewrap stuff either. And it hurts. It basically meant that I got a 400 point handicap from that point onwards. So, if building a serious list - always, ALWAYS consider Drop Pod defence. So dangerous.
I'm also glad to see that my Decimator actually did stuff in this game. He killed 14 Marines and two Dreads by himself. That's a good showing I think! Without him this would've been a massacre after that start.
I was obviously at a huge disadvantage from the beginning with my lack of Troops, and then my best Marine-killer (Defiler) died in turn 1... So I had to play from behind all game, and try to play for a draw. In the end it was really close, a lot closer than I thought it'd be actually. Those big guys can really dish it out if they get the chance!
One Ironclad surviving two meltas and three Power Fist attacks in one turn... MVP for his side for sure!
Oh, and it was also the first outing of my Dark Angels. Okay, not a big one by any means... but they did their job really well. It's pretty sick that they can take a Plasma Cannon in a five man squad! And Preferred Enemy really hurts... In the end they were kind of the back-up plan for him that could secure the win, so I'd say they made a really sable addition to his army this time, despite only being 6 of them!